Ok so I agree with Amin it does look a lot better in real life and does lend itself rather well to the camera. It is not a combination though I would have thought up myself but its stands out from my usual wood and amber tastes so kudos to VE for dreaming up a mix that works. Taste being what it is I cannot see it being for everyone but it is eye catching. The plates themselves are more of a wine red than a pure red and have a slightly thicker tonality than the more translucent green shell.

Both the plates and shell are bubble free acrylic but feel solid and sturdy to the touch (a little acryl fill there helps). The single large bore in the nozzle of the VE5 is uniform and smoothly finished with no excess acrylic residue to be found anywhere. The laquer finish is excellent without being over cooked. If there is one slight area that is noticeable is the join between the plate and the green shell which has a very delicate but present thin white line all the way round. It creates an impression of two parts rather than a single whole unit. Its relatively minor for me and I understand it helps in the build process but it may not be for others looking for something singular or uniform and it is not something I saw on the VE6XC in 2014.

Much like the VE6XC the VE5 is an incredibly comfortable fit with an outstanding seal even by CIEM standards. There is no uneven pressure within my ear canal, even with my weird crooked left ear canal. It inserts smooth and stays comfortable throughout. Externally it sits as flush to your ear as you can get for a multi-driver CIEM with very little protrusion or getting in the way of your general day to day activities.

Opening and closing my jaw never once broke the seal either, which by the way is once again excellent. I would rate the seal on both the VE5 and VE6XC as relaxed but very well balanced and sitting firmly in your ear. The bore itself does not go as deep as the SA-43 from M-Fidelity or the V8 and A12 of 64Audio but I do not think it needs to. This CIEM will not fall out of your ear accidently even with vigorous movement. Background noise isolation was really top notch also with the VE5. Gone was the air con, the fan and then general din of everyday life. It won’t isolate against everything, that’s not possible, but it will provide way above average noise free listening conditions. Essentially you are getting flagship levels of comfort and fit with the VE5.

Whilst you have a choice of cable colors the green and red mix of the shells made black the only realistic color match for my VE5. The cable that came down with the VE5 is the same soft, pliable and light quad cable that I had received with the VE6XC. This time I got a nice HF logo with my name on the y-split tube which I did not get on the VE6XC. The print was clean and clear so thanks guys for going one step further on the cable personalisation. 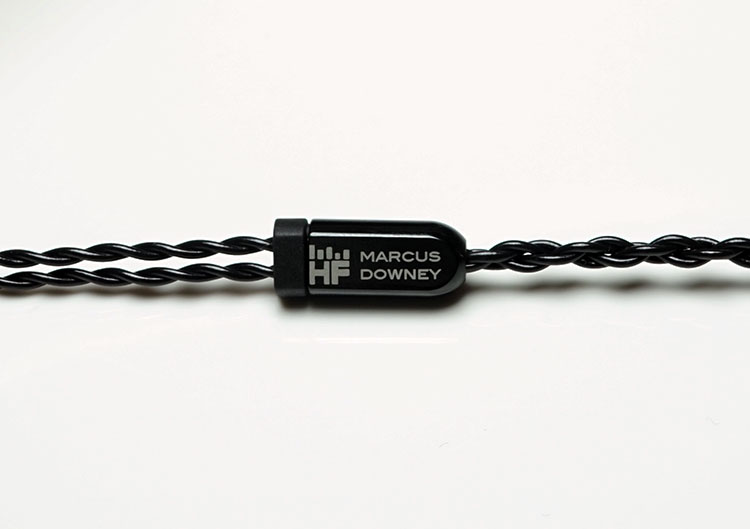 Vision Ears are still using 2-pin Westone style cable sockets for the VE5 and thankfully not too tight either for cable swapping which was an issue I had of late on the Rhines Stage 5 and the Cypher Labs C6IEM. They won’t fall out but they do not need a set of pliers to detach from the recessed socket either. A 2 pin socket also brings aftermarket cable swapping joy as the majority of my cables are 2-pin such as the SXC range from ALO, the Vitesse from Null and the Twag V2 from Whiplash. 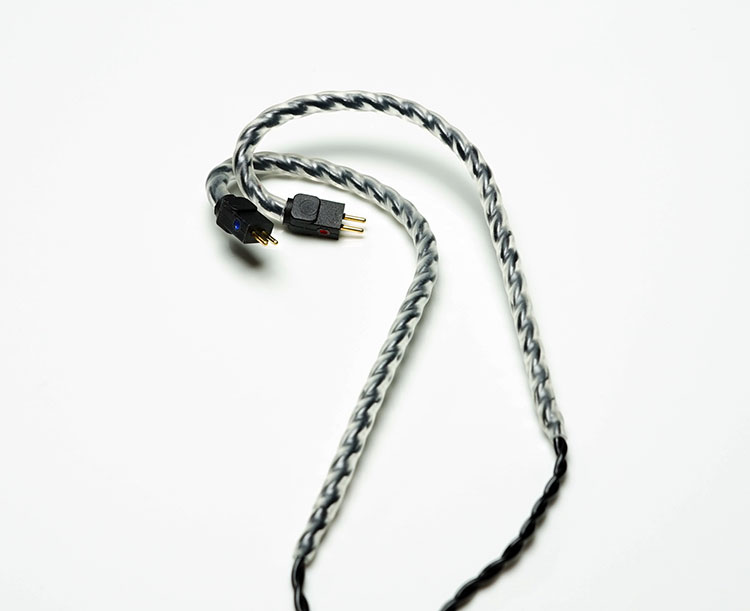 The stock cables are finished with an over the ear memory retentive wrap that is pretty easy to work around your ear and significantly cuts down on any potential microphonics travelling up the cable. The other end is terminated with a small 3.5mm straight 3.5mm gold plated plug with relatively decent strain relief. The package does come with a quarter jack adaptor should you need to use one with your setup. 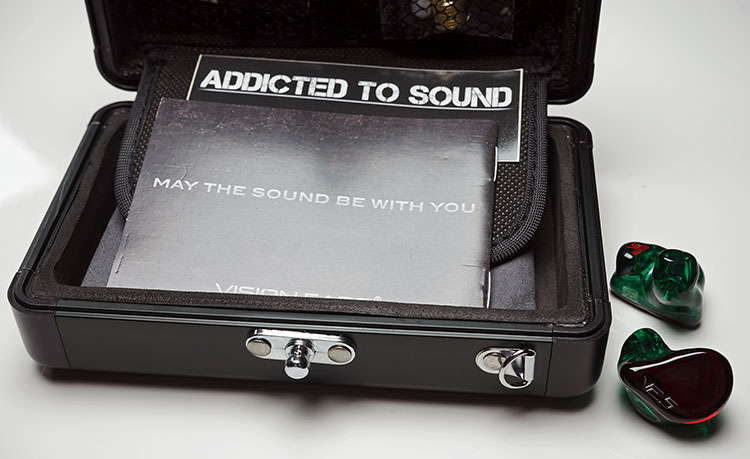 All of this came packed in their rather excellent large hard carry case which I still rate as the best in the business bar none with tons of room for a soft pouch, additional cleaning tool, the quarter jack adapter, some stickers and the VE5 itself. The case looks incredibly durable with some nice print decal on the top which you can custom order in advance.

On the inside you have a split layer (soft cushioning) for protecting your customs from any internal downward pressure that could damage the shells, a soft pouch if you just want to travel around, a small netted holding area on the inside of the lid and excellent quality cushioning all around the insides. There is enough room in this case to carry more than one cable also.

At the time of writing VE will shortly be launching an alternative pill case type screw box similar to the Roxannes only in shiny silver. It is not expected to replace my fav large pandora’s box above but it is an option.

This VE metal case will be available as additional accessory and will definitely not replace our bigger hard cases. If you place an order, you can add this metal case to your order but you cannot choose between those two cases. This would not be very professional because all the accessories we give as a standard would not find any storage place in the round metal case

Tonally the VE5 was not quite what I imagined it would sound like. I was sort of expecting shimmer, sparkly, hot cymbals, big vocals and everything to just fall in behind that like some sort of evolved Fidue A83. Yet instead I found a CIEM that managed to put out an articulate and very present treble performance without resorting to any cheap peaks to get the message across. Just check out that configuration if you are in any doubt where the emphasis is – only one driver for the bass and 4 for the mids and treble – that’s conviction for you and it shows in the level of control the VE5 possess.

What you get with that configuration is a rather neutral to slightly bright tonality that is speedy, tight and stays just on the right side of musical rather than sounding sterile and thinned out in anyway. Matching may play a role in this, which I will get into later, but running out of the AK120 mk1 with the Glove A1 DAC/Amp or the FiiO X5ii I just didn’t feel the VE5 was capable of presenting a fatiguing kind of sound, even with long listening periods. It just didn’t feel too in your face.

Bass on the VE5 is not the most present or extended bass you can find on a CIEM. It pales in comparison to the Merlins depth and the ADEL A12’s richness or even the V8 rowdy midbass extravaganza but that’s not what the VE5 is all about. What it is though is accurate, speedy and tight and when pushed it can indeed rock. Surprisingly when called upon on track such as “My Pet Coelacanth” from Deadmau5 is really didn’t sound anaemic at all. It can hit and hit hard with great detail but just not as full sounding or as extended as some of the more noted bass driven CIEMS. The single driver BA for the lows on the VE5 just keep everything tidy with a good kick without overdoing it.

It’s all about the vocal presence and that means a much more pronounced upper midrange. That’s the calling card of the VE5. Its forward, full of character, lacking in any sibilance and just perfect for vocal lovers, well for me anyhow. Those looking for a bit more crunch and body to the lower midrange though might be less than satisfied as the dominance of the upper midrange means there is a slight thinness in this part of the range. Given the bass is more supportive than dominant it can mean at times instruments can feel a little unnatural and giving way quite some bit to the vocals.

Asia’s “Russian Dolls” off Gravitas is a good case in point. Everything is there, the clarity is top notch but once those Wetton vocals kick in everything else takes a slight back seat. It’s a welcome change from a lot of vocals being stuck right in the mix being neither here nor there but if you are looking for balance and accuracy then the VE5 is not quite for you. If you love Whetton’s vocals, much like I do, then the VE5 really lets them soar with superb texture and detail and zero harshness. Vocal harmonies can be positively euphoric on the VE5, benefitting from a very spacious and tall soundstage. I have always been after a CIEM that does justice to AOR vocalists like Wetton, Winwood and Catley and the VE5 covers that and then some.

The VE5 is a very good introduction to those wondering what a good treble sounds like. This is a treble that is very clean and clear with excellent extension and oodles of headroom. It has none of the traits I find bothersome in poorly executed treble such as peakiness, strident or being overly forward. It simply doesn’t distract in a negative way. Articulation is very nimble indeed and what I love most is the decay is just short enough to stop everything from falling in on top of itself or lingering too long.

The VE5’s soundstage is not the biggest, that accolade goes to the vastness of the VE6XC and in some respects the Merlin and A12 are much deeper. However the VE5 treble is the way it just extends so effortlessly. I remember saying that the Rhines Stage 5 had one of the smoothest ascendant v curves into the treble, free of any harshness or peaks. It’s really rather the same result here with the VE5 but, unlike the Stage 5, the Ve5 has none of the recessed mid-section that held the Stage 5 back a bit. There seems to be no real temptation to roll the VE5 off or sugar coat it just to be on the safe side. A good driver tuning shouldn’t need to hide any deficiencies and the VE5 has 2 very good drivers indeed.