Our review covers the iBasso DX300 which is a flagship DAP featuring Snapdragon 660, Android 9, and a quad DAC design. It is priced at $1199.

Disclaimer: The iBasso DX300 was sent to us as a sample in exchange for our honest opinion. We thank iBasso for this opportunity. 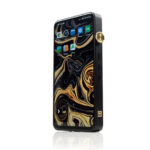 iBasso DX300 Review
The DX300 has a natural tone, a tube-like quality yet still with a very black background. It is easy on the ear with beautiful texture in both instruments and vocals as well as excellent staging to flesh it out properly.
Slide here to add your score on the gear!335 Votes
9
9
Reader's Score
$1199
iBasso

After three years iBasso has finally retired the 200 series of their DX DAP range and formally introduced their next-gen DX300 to the international market at the start of 2021.

This series was beginning to show its age on the digital side but it went out with a bang via the truly excellent DX220 MAX. This was a limited edition ‘pimped out’ transportable behemoth of the DX220 that walked away with our Top Gear Award for 2020.

And in truth, whilst the DX300 looks incredibly different with some serious upgrades on the DX220 and the MAX version, it has also benefitted from some of the engineering philosophy behind both of the previous players mentioned above.

Just to mention also that the launch of the $1199 DX300 signifies the end of the road for not only the DX220 but their associated amp card system. iBasso are not doing away with them thankfully but it is a brand new ecosystem of cards specific to the new DAP design.

There was quite a bit of speculation about this the minute iBasso mentioned that this was not going to be a continuation of their Sabre DAC designs from the 200 series. We all know that AKM’s main factory had a tragic fire recently so AKM chips are scarce, especially for any production ramping for volume.

The clue I guess was already there with the mid-fi DX160’s use of a dual Cirrus Logic CS43198 implementation, something that iBasso genuinely liked as an alternative over AKM.

The DX300 doubles down on the dual and offers a huge quad Cirrus Logic CS43198 implementation, or two per channel. That makes it the first DAP to use a quad-DAC implementation and I suspect it will not be the last either.

This had to happen with the 200 series RockchipArm Cortex SoC proving to be a bottleneck in otherwise excellent sounding DAPs. Newer DAPs to the market such as HiBy’s R8 and FiiO’s M15 were already showing some serious speed and processing power so it only makes sense for iBasso to fight fire with fire.

The new CPU inside is the Qualcomm Snapdragon 660 SoC which is the exact same CPU as the one inside the HiBy R8 and we know that one is faster than the Samsung Exynos 7872 inside the M15.

Except, iBasso went further and added a 6GB RAM as opposed to 4GB inside the R8 which makes this potentially the most capable SoC inside a DAP on today’s market. You can skip to page 2 to see how our performance benchmarks and if this was really the case.

The Snapdragon 660 also comes with a default built-in BT5.0 and MU-MIMO 5G WiFi capability which iBasso seems to have taken advantage of with upgraded internal antennas for better transmission and volume from wireless streaming.

iBasso has also split the audio processing from the main Android/Mango OS process handling by using an FPGA between the Snapdragon 660 and the SPDIF out and quad DAC array.

That leaves the 660 to primarily handle all the Android multi-tasking capabilities whereas the FPGA defaults to master mode to request the audio data stream directly from the CPU for time-domain processing via two Accusilicon Femtosecond oscillators. Hence the name FPGA master.

Essentially, the DX300 audio process is cleaned up for jitter with proper clock control before going to the DAC for conversion into the analog signal.

Now, FPGA is nothing new with FiiO also deploying programmable FPGA in their flagship M15. Except FiiO’s FPGA in this instance is in slave mode whereas the DX300 is in Master mode.

Another instance is Chord who exclusively uses FPGA for their own DAC processing. What is also likely to be new is the algorithm or programmable software iBasso has implemented via the FPGA for their clocking process.

Thankfully, iBasso has decided to retain the amp card system for the DX300, however, it is a new design and implementation. That does mean that the first 9 cards that came with the 200 series will not work with the 300 series.

It is not a complete break with the legacy designs, however, it does have some significant upgrades and benefits from the fully balanced quad-DAC design. The stock card offers a true balanced 4.4mm line out, as well as 3.5mm TRS and 2.5mm TRSS PO and LO options.

AMP11, as it is being called, is also a discreet design, one that originated in the older and very popular AMP8. However, it has some upgraded internal components including the resistors and capacitors as well an excellent output capability of 1240mW on a 32Ω load.

The aim is pretty simple and that is to reduce the load that would be on a single power supply and cut out interference and noise between the digital and analog functions inside the DX300 by using two independent power supplies.

The concept of splitting the power supply is not new to the DX300 with the DX220 MAX’s digital/analog split leading the way. However, the implementation inside the DX300 is slightly different. Well, it had to be considering the DX220 MAX used a whopping 5 individual li-poly batteries, one of the key factors in its large size and weight.

This time there are two batteries and a single USB-C QC3.90 quick charge port for both instead of a separate DC external power supply and USB-C as found on the MAX. The split remains the same, however, with a larger 4000mAh for the digital side of the player and a smaller 2000mAh for the analog side. 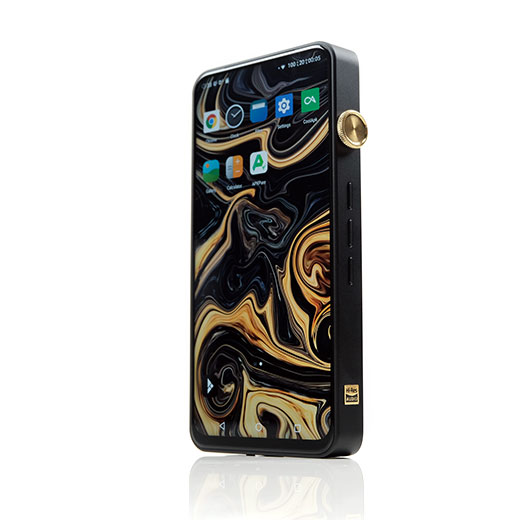 Much of that girth is down to accommodating the impressive 6.5″ LCD screen of the DX300 which is just stunning and you can read more about that below.

The aluminum housing finishing is very refined with smooth cornering and zero sharp edges allowing the screen to take center stage. You can get the finish in two color options, black and blue with our sample unit being the black version.

The dimensions are not uniform, however. The right panel is slightly angled which I presume is for an enhanced grip and operation of the physical button and dial controls houses on the side. The matte-finished rear panel also has come curving reminiscent of Samsung’s older Galaxy S9 Plus which I find quite smooth and easy on the palm for operation.

Eagle-eyes readers will spot a very thin LED strip right at the top of the DX300 screen which will light up with very status warnings including different colors for different bit/sample rates of the tracks being played.

The new amp cards are housed at the bottom as before only with a curved panel that has much better integration compared to the older versions. These cards have only one outer panel, the base plate with the output options.

All the rest of the housing is from the main DX300 player itself. That should cut down on manufacturing costs for future amp cards and prevent unintended color clashes that did happen on the 200 series.

I am on the fence regarding the DX300’s new gold-finished multi-function rotary dial on the right panel as there are some pros and cons to it.

On the one hand, its articulation and handling are much easier than the older 200 series volume dials which were very tight to the housing. The angular position and grippy finishing on the edges make it very easy to rotate for volume and press for turning the screen or power off.

However, aesthetically it sticks out a bit from the otherwise smooth minimalist design. It does not quite feel integrated into the design as I would like it to be. It also has no guard which could lead to accidental volume jumps or power off if you do not deactivate it via the Android menu. 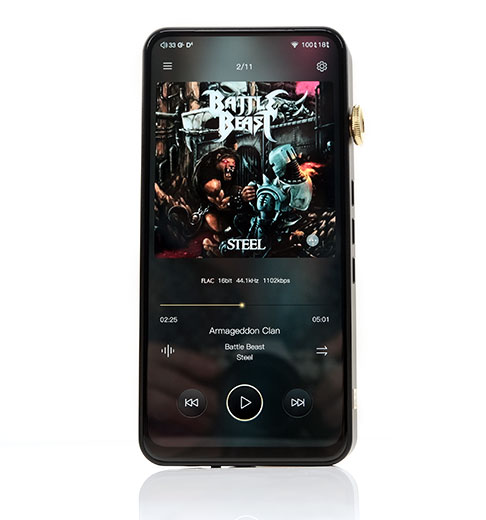 It is a running theme since the DX200 almost and that is the drop-dead gorgeous screens they have been using for their DAPs.

In many ways, this is akin to a good quality smartphone screen experience. Heck, it’s virtually the same size screen as my own smartphone, the Asus Rog Phone 3 so I am well used to the screen real estate.

Culturally, I think we are used to large phones these days, at least in my area, so this is a very familiar and eye strain-free experience. I also think people might see this as more than just an audio player. With that type of screen, decent refresh rate, and CPU, Netflix addicts and casual gamers might appreciate it also.

Combined with the better CPU the response rate on this new screen is snappier than the older 5″ DX220 (MAX) screen with lightning-fast action and next to no delays or lag. The size and pixel density also make it very legible on the eye with wide viewing angles also.

Click on page 2 below for Controls, power management, and internal hardware

Click on page 3 below for software impressions and wireless performance

Click on page 4 below for sound impressions, synergy, and pairings