This review covers the iBasso DX220, which is the company’s flagship DAP and supersedes the older DX200. It comes with Android 8 out of the box and is priced at $899.

Disclaimer: The iBasso DX220 was sent to us as a sample in exchange for our honest opinion. We thank iBasso for this opportunity.

To learn more about iBasso products that are featured on Headfonics you can click here.

Note, this article follows our latest scoring guidelines which you can read up on here.

iBasso DX220 Review
At the time of writing, the DX220/AMP1 MKII combo is the best sounding DAP for under $1000. No question iBasso has doubled-down on the already excellent value DX200 from 2017 and produced a stellar sound signature update for a minimal increase in price in 2019.
Slide here to add your score on the gear!166 Votes
8.9
8.9
Reader's Score
$899
iBasso

In 2017 iBasso released what turned out to be one of the best sounding DAPs under $1k, the DX200. It was pitched as the successor to the reference level but far more finicky DX100 from some years back. It also included a user-replaceable amp card system of which there are around 9 variations though only 3-4 are officially for sale on the iBasso website.

They were not the first to use replaceable AMP cards, both Hifiman and FiiO deployed similar amping eco-systems for their DAPs. However, iBasso AMP cards seem to have more legs than the others and on the whole, a more convincing level of investment. In short, they have been well received by both DX200 and DX150 users alike.

However, nothing is ever perfect. The advent of the super-fast HiBy R6 left many feeling the DX200 could do with some enhancements to keep the “engine’ competitive. Roll on 2019 and iBasso’s answer to that? The new DX220 should be seen as a competitive evolution of the DX200 rather than a totally different concept.

The price for the improvement? Just $899 which is just $30 more than the original DX200. This could well be a superlative market disrupting device at that price point for all the changes that have been made.

Since the DX220 is more of an evolution than a completely new DAP there are definite enhancements but also some legacy features that have remained from the original DX200.

A bigger 5″ IPS 1080p screen and a shorter more refined body. The DX220 makes both the DX150 and DX200 look almost antiquated with their smaller screens and angular or blockier form factors. The almost borderless approach worked a charm with the HiBy R6 Pro and iBasso seems to agree also.

On the hand, it is a stunning-looking upgrade, made all the more attractive with the introduction of Corning Gorilla (2.5D) glass which delivers a lot more “pop” to the display.

Whilst out of the box Android Oreo for the DX220 is nothing new, (Both DX150 and Dx200 have it now), the introduction of a vastly overhauled Mango dual-boot OS and app is a first. This is nothing like the older clunky player, looking more refined and user-friendly.

It also has a few ace cards up its sleeve in its new settings menu that will provide a lot more user engagement. That includes a debut for iBasso’s first-ever Parametric EQ system as well as an in-depth user configuration on how to navigate Mango as an app and what options are available. 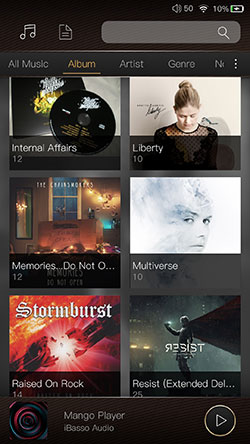 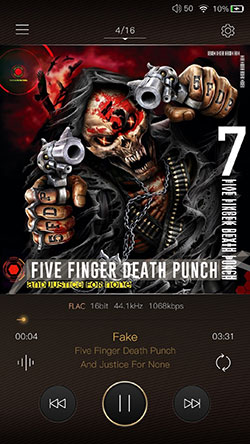 Another big new feature for the DX220 is the inclusion of MQA support. Not just rendering at a software level but also the capability to unfold. The DX220 supports MQA in X4 mode as well as hardware support for streaming MQA via the TIDAL up to 72kHz.

The DX220 wireless features get a fairly substantial upgrade to Bluetooth 5.0 from Bluetooth 4.1. I am not entirely sure any DAP currently on the market uses BT5 so the DX220 could be the first.

The DX220 launch ushers in a brand new version of the original DX200 AMP1 card. The new card is based on a more optimized version of the AMP1 Ti card that made its debut with the high-end DX200 Titanium Edition last year though no 4.4mm option.

Combined with the DX220 new 3-stage gain feature ideally AMP1 MKII should deliver a lower noise floor than the original and more spacious sound. This seems to be a direct response to the increasingly sensitive monitors now on the market such as the Campfire Audio Solaris.

The numbers also look better on the new AMP with a lower SNR and better THD+N performance. A big factor in achieving that lower noise floor.

So, what has remained? Well, the DAC implementation and choice of chips remain the same with a dual ES9028PRO chipset as well as the 8 core 64BIT ARMv8 processor for the CPU. Probably fair at this point to state that the 2GB of RAM has been upped to 4GB which makes it the highest RAM level in any DAP right now in the market.

Importantly, the AMP card system on the DX220 remains backward compatible. That is critical for those thinking of upgrading because some of us have quite a few of the cards we love and cherish as well as the fact that AMP1 MK2 does not have a 4.4mm connection making the likes of the AMP8 very relevant. They will work, all of them, and in the same user-replaceable manner.

The last legacy feature to remain is the lack of Google Play services. Bummer. Instead, iBasso has supplied some alternative 3rd party applications such as APK Pure to get the job done.

There have been a lot of physical design improvements on the DX220 making it much sleeker looking than the DX200. The chassis is CNC’ed from a single aluminum block and eschews a lot of the bolt-on aesthetics of the DX200 in favor of a more integrated approach.

For example,  the DX200 volume guard bolt-on work in favor of a knob-protector built right into the right panel.  Like the DX200 there is a small convex-like bump on the right side of the panel that houses the power button. However, instead of the bump being part of the bolt-on protector it is also part of the main DX220.

The finishing is also more refined on the edging work of the chassis and the anodized finish is a lighter gunmetal tone. On the older DX200, it was quite curved and smooth on the cornering, however, the ledge work from the front panel to the side panel was a bit sharper.

iBasso has graduated that ledge a little more aggressively this time around on the DX220 with a result that it feels marginally smoother in the hand.

The rear panel has also had a bit of a revamp with a new ‘shinier’ or reflective CNC back cover. This material matched on the base of the new AMP1 MK2 card to give the back a continuous or harmonious look.

The only detraction from the new styling is that the old AMP cards finishing might look a little out of place on the DX220. I am told by iBasso however that they will be providing new backplates for the AMP cards that can be applied or bought with the cards.

The final design change will be of great use to larger fingered users and those are the physical size of all the buttons. They are bigger in size and also a little flusher to the side and top panel. I suspect this is a carry-over from the DX150 which also had larger buttons. However, the metal finishing on the DX220 physical buttons is a lot more refined.

Also changed is how the internal antenna is housed. On the DX200, it was inside the housing with a plastic section at the top of the back panel to allow for a stronger signal. Now the antenna cavity is right inside the backplate and technically outside of the main body to maximize antenna coverage.

We have added the dimensions and weight to our ever-growing DAP table below. As you can see it does differ slightly from the original DX200 being slightly shorter, wider, and not as tall either. The weight is unchanged at 240g.

The DX220 is still lighter than the likes of the R6 Pro stainless steel and also lighter than the DX150. On day-to-day handling, it is unlikely you would really notice the size differences over the original, however, the smoother ledge milling work and the lighter weight are noticeable.

The longer screen also brings a lot of the repetitive functions on the OS closer to your thumb making it a bit easier to operate the DX220 from one hand. 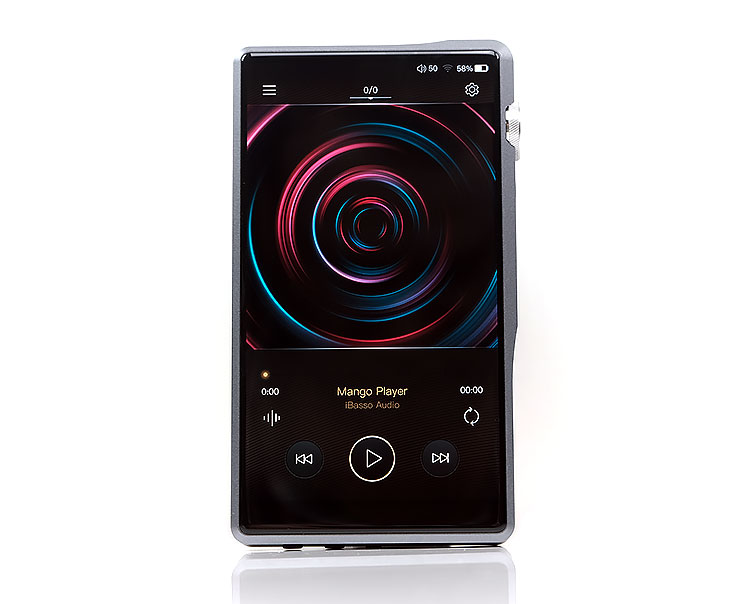 Further, the screen completely dominates the front panel with an almost borderless design and is encased in protective Corning Gorilla (2.5D) glass. The bezel is almost gone, much like the HiBy R6 Pro, and that Corning Gorilla protector really gives the screen display an attractive visual ‘pop’.

In fact, I can’t think of a DAP out there right now that boasts of a better-performing large screen than the one currently on the DX220. The viewing angle is just superb, I can almost read it flat at eye level. The color depth and saturation just fly off the screen, especially if you dial up the brightness to 100%.