As with all iBasso DAPs, the I/O is clean and well organized. You have the analog outputs at the base with the amp cards and the fixed digital I/O at the top.

Of course, the analog outputs are not fixed. New amp cards means new variations but it is nice to see all 3 standards on the new card including 4.4mm PO and true balanced LO, 2.5mm TRRS, and 3.5mm LO/PO outputs.

On the top panel, you have a central USB-C port that duals for charging and USB-DAC/OTG, and a coaxial output to the left. No more optical output functionality carried over from the 200 series DAPs, however, coaxial does have a higher decoding capability of 24bit/384kHz compared to optical’s 24bit/192kHz.

The DX300 has two storage options. The first is a healthy 128GB of onboard flash RAM which is the highest any DAP has at this price point. On the left panel, you also get an additional single microSD slot which is a consistent I/O choice from iBasso since the DX200.

Like most modern media players, the DX300 controls are a hybrid of methodologies, that includes physical, touch, and wireless via APK (where applicable).

The DX300’s physical controls are split into two areas. The first are 3 slimline side panel buttons that control playback and the second, the multi-function rotary dial which controls volume, the LCD screen on and off, and power/reboot.

There does not seem to be any combination techniques such as power/playback for screenshots so you will have to use an APK for that such as ‘ScreenTouch’ which is my app of choice.

I do have 2 critiques on the physical buttons. The first is they have no labels permanently etched onto them. You do get a removable sticker out of the box that indicated what they do but eventually, you want to be taking that off.

The second is the sheer ease with which you can accidentally press them when handling the DX300, especially with the case on. The placement is right where you apply pressure when gripping the player and picking it up.

The rest of the control system is done entirely through the touch panel options as well as some wireless options. The touch experience of the DX300 is excellent with an instant response, double-tap to wake controls, (latest firmware), multi-touch gestures, and that big IPS screen for bigger fingers.

There is virtually no lag between executing a touch command and the DAP responding to it. Everything feels snappy including the obligatory pinch and zoom multi-touch features where applicable.

Both batteries are QC3.0 compatible for quick charging and here I would suggest you get one that is rated around 18W or higher because the DX300 is quite slow for a regular charge, particularly from a laptop USB-A output.

The rated time is 15 hours and I presume this a best-case scenario with the screen turned off, low-res files, 32Ω loads, and so forth. During normal play on Mango OS, a bright screen with hi-res tracks, the DX300 did quite well with about 13-14 hours.

Switching to Android was a little harder to judge due to the constant process management from apps and some WiFi usage but definitely close to 13 hours with the screen off and closer to 11-12 hours with a lot of heavy task usage.

Given its dual power system supply system, the battery management on the DX300 is a little more complicated than competing DAPs. Essentially you have two icons at the top of the OS notifications bar indicating the battery life of each supply, digital and analog.

Each one has a different drawdown rate depending on your usage so they never drop at the same time meaning at times you may run out of analog first or the digital. Normally, I find the digital drawn down is much faster when using Android with a better balance achieved with the less strenuous Mango OS. Your experiences may vary depending on your own usage conditions.

If you run out of analog power the digital side will still work which means USB-DAC, SPDIF output, and OS operation but not amp card sound. If the digital side runs out then it’s the reverse but logically if you cannot turn it on then you cannot use the analog output.

DX220 MAX users should be very familiar with this system as it works on the same basis except no additional DC wall wart is required to charge one of them. This time around the single USB-C port will charge both of them at the same time which is welcomed. 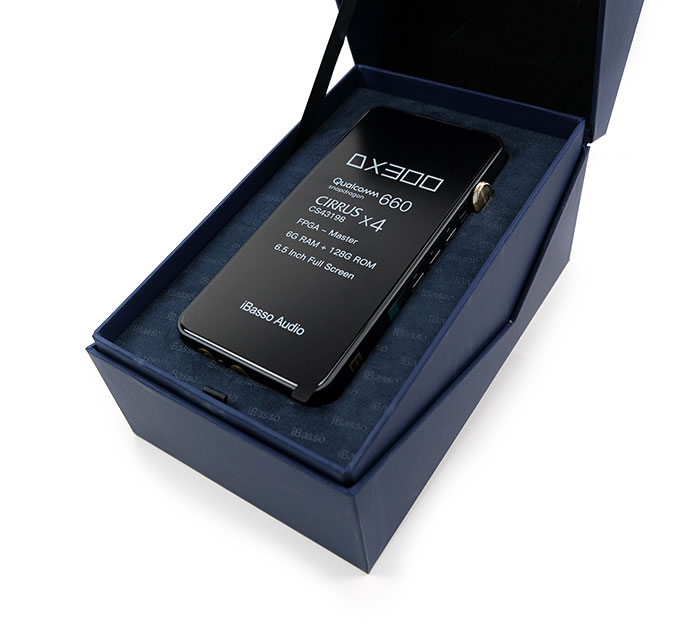 iBasso has used a split box silver and blue package design of medium size for a DAP rather than the angular burgundy of the previous DX220. It is a little simpler in application but no less professional and offers decent protection for the contents.

iBasso has also simplified the internal packaging on the DX300 compared to the vertical internal stand of the DX220 packaging. Perhaps due to the increased size of the DX300, it was seen as less wise to stand it on its head for shipping. It does remind me of the older DX80 layout with an angled display slot for the DAP on top and the accessories stored below. 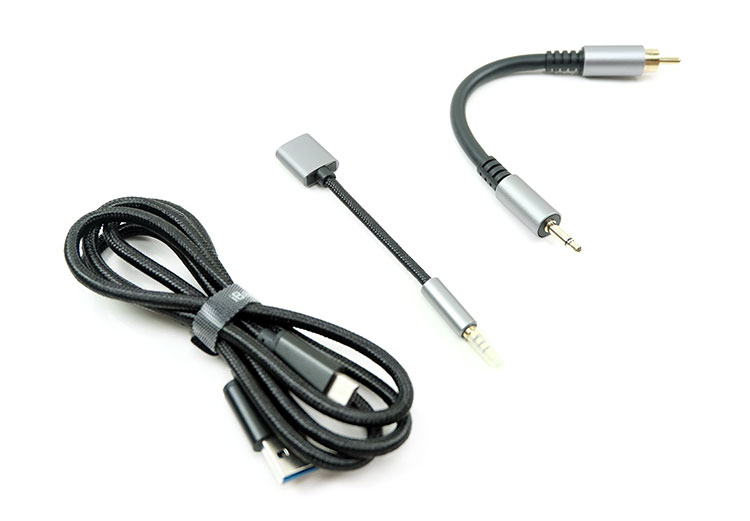 Accessories are consistent with the previous DX220 release with the inclusion of a USB-C to USB-A charging and data transfer cable, dummy load burn-in cable, and a SPDIF to coaxial conversion short IC.

You also get 2 screen protectors one of which is tempered glass and the other a soft film type application which are not pre-applied.

The last major accessory is an attractive-looking blue-colored leather case and like the DX220 supplied case I do have a few issues with it.

First, the pros. The case is a nice soft leather material that does not add too much bulk with plenty of space to easily fit jacks and operate the multifunction rotary dial. It also stays very clear of key swiping areas such as the top navigation bar and the base command options in Android mode.

Now, this might be just initial batch teething issues but the cons are primarily centered on the fit which is a bit loose for me. The DAP can slide out a little too easily, especially when plugging in a jack it does slide up and out with minimal force.

With the tempered glass fitted the DX300 also catches the top of the leather case a little and may not always go in 100% without some tweaking so watch out for that. One suggestion that seems to stabilize or tighten the case is a small piece of tissue underneath and it does tighten it somewhat.

As far as I am aware this is the first DAP to use a high-end quad-DAC implementation. Normally it is dual, one per channel but this time it is two per channel to create a fully balanced output.

The choice of a delta-sigma Cirrus Logic CS43198 implementation is not so surprising given the market conditions and the previous use of the same chip in a dual configuration inside the cheaper DX160. From what I have read this choice also came down to a tonal preference from the designers as much as the required technical performance.

The choice also means a slight change in decoding capability from the DX220. PCM performance remains the same at 32BIT/384kHz but DSD native decoding drops from top-tier DSD512 to DSD256 with support for ISO SACD files.

How relevant this is to you will depend on the files you will likely be loading on the DX300 but this is a slight drop in future-proofing on paper compared to the DSD512 capability of the DX220. Personally, I only have 3 free to download DSD512 tester tracks with the majority in DSD128 format so it is not a huge issue but I know a few who have DSD512 albums from Native DSD Music.

The codecs covered are wide-ranging and fairly complete. You will get everything from lossy to high-res native decoding. The full official list includes MQA, APE, FLAC, WAV, WMA, ACC, ALAC, ISO, M3U, and M3U8 but it will also handle DXD, DSF, and DFF files so do not fret.

Like the DX220, the DX300 deploys a BIT for BIT system-wide playback architecture up to the max 32BIT/384kHz. That renders the Android core bitrate limitations moot. That means bit-perfect playback, not just in Mango OS or the Mango app but for any app that does not alter the source bitrate itself.

MQA unfolding and rendering is a huge setup from the DX220 for those that love TIDAL or other MQA wrapped formats. The DX300 supports MQA in X8 mode as well as hardware support for streaming MQA via the TIDAL up to up to 384k/24BIT.

The new amp card, AMP11, is actually a reimagined AMP8 from the previous amp card system. AMP8 had a lot of fans for good reasons with its powerful voltage swing and excellent level of engineering.

The new AMP11, like AMP8, is fully balanced and also discreetly engineered so that means individual components rather than opamp buffer stages for precise control to deliver high voltage and current without killing low impedance potential.

One of the big improvements focuses on the output options with AMP8 only offering a 4.4mm balanced output in LO and PO format. This time we have 3.5mm TRS, 2.5mm TRRS, and 4.4mm with both LO and PO functionality on the AMP11 which provides far more versatility.

You might notice also that iBasso has supplied mW ratings under specific loads with the DX300 which is the first time I have seen them frame their output ratings in this particular way.

This is important because their amplifier power shaping before did not easily fit the usual Vrms to mW calculators you find online so simple conversions were actually inaccurate according to the iBasso team.

This time we have something more specific to get our teeth into with a healthy 350mW SE rating under a 32Ω load and an excellent 1240mW balanced into the same load.

That makes the DX300/AMP11 pairing a more powerful pairing compared to the HiBy R8’s 300mW SE and 1088mW balanced capability. Certainly, the most powerful DAP I have reviewed to date outside of the DX220 Max.

Click on page 2 below for Controls, power management, and internal Hardware

Click on page 3 below for software impressions and wireless performance

Click on page 4 below for sound impressions, synergy, and pairings