The X3 DAP by FiiO

At the heart of the X3 lies an E7/07k tonality and that does not suprise me in the slightest given this has been FiiO’s house sound for quite sometime. Dont expect AK100 levels of resolution or DX100 levels of power but what you do get is a nice warm laid back tonality with next to no background noise or hiss for sensitive earphones, a well defined mid section, good tight bass without being too dominant (you can eq that if you wish) and a slightly rolled off treble. This is in no way a dark sounding DAP with an attenuated treble but it does lack a touch of sparkle on the top end articulation that higher end models can produce such as the DX100. The X3 is all about tonality over detail for me compared to the Hifiman, iBasso and Ak100’s of this world. You are going to pay more for those and you would rightly expect more but if you want something a little more forgiving with nice tonality that is flexible across a wide range of genres then the X3 is going to please a lot of listeners.

What I did notice and enjoyed about the X3 sound presentation was the fantastic depth it achieved combined with a very noise free background. Without ever creating the largest soundstage the X3 is able to give a really strong account of itself in good depth and fine instrument position and layering without loosing any richness in the tonality. It is not an overly forward or aggressive presentation and combined with the hiss free background I really took to the FiiO X3 on vocals and jazz with some of my more considered IEM’s such as the Final Audition FA-BA-SS which is so painfully transparent I am almost reluctant to try anything less than perfect with them but with the FiiO it sounded rather more forgiving. The Merlins, perhaps not the most detailed at the top end, did ok also but the FA IEM’s, with their more balanced approach, were the better match for me. 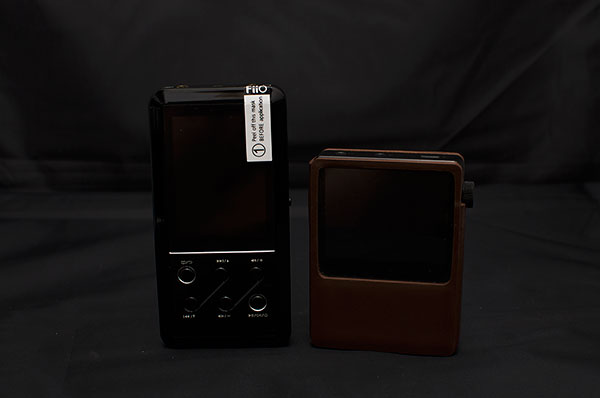 The X3 has actually quite a decent amount of internal amping capability compared to some other similar priced DAP’s. I dont think for the majority of on-the-go headphones you will need too much amping to be honest. Amping is only really necessary if you want something slightly different or a higher dose of power for more demanding planers or high impedance headphones or the inefficient AKG 7 series drivers (make the K501 part of that bunch also which hit 80% on the volume marker with a slightly underwhelming bass reproduction). Portable mid-fi did just fine though with the Marshall Monitors (less the felts), P5, M80 and the inefficient Philips Downtown all being easy to drive and all sounded true to form. If I had to pick one I would stick with the M80 overall as the best compliment out of those tested to work with the presentation of the X3.

Overall I had to say I enjoyed the musical and warmish tonality of the X3 though duly noted this is no AK100 tamer in terms of resolution, detail and top end articulation, it does come out a lot better than the lower end iPod classics in stock mode which can sound a little too digital, clean and at times thin sounding and have nowhere near the driving power of the X3. Of course you can slap an ipod now on the back of the superior Cypher Labs SOLO CLAS or Fostex HP-P1 but then you have that fat stack to carry round and an empty bank account as the final payback.

Continue to next page for some conclusions….