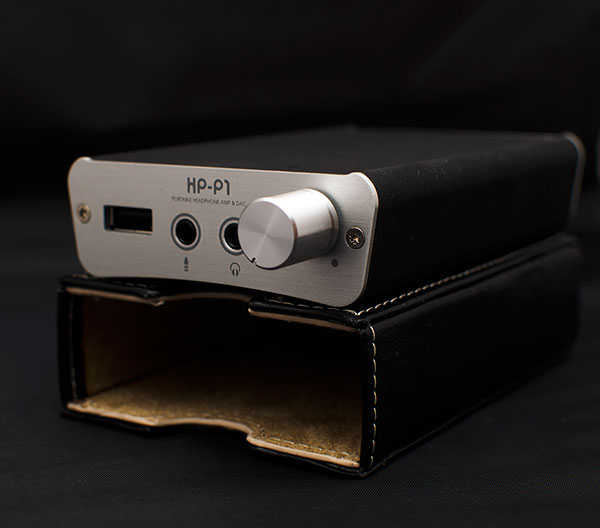 You buy an igadget and up until recently you are pretty much hampered by whats inside the iphone or ipod in terms of amp and DAC which although respectable of late can never really duplicate a quality DAC and amp setup. In walks the Cypher Labs CLAS SOLO and changed the game overnight with a licensed interface with iOS that allowed the CLAS to take in a pure digital signal and by-pass the igadget’s own DAC combined with a very low jitter asynchronous clock and expansion fit into the ALO Audio RX MK2 and bingo, a full fledged igadget audiophile setup. Mind you at a fairly high price with the CLAS over $500 and then throw in an amp and you are sitting at maybe $700 plus. The results where excellent, for those who want to revisit just check out what we though of it when we first reviewed it, .

But that was then and fast on the heels of the SOLO came a market response from respected Japanese audio manufacturers Fostex with the HP-P1 which in essence does the exact same thing as the SOLO but with a few twists. The HP-P1 is a hybrid of the combined ALO Audio and Cyhper Labs vision being both a DAC, a headphone amplifier and a portable transport for digital signal from igadgets and out to wherever you like. All of this wrapped up in a single rather elegantly crafted chassis. 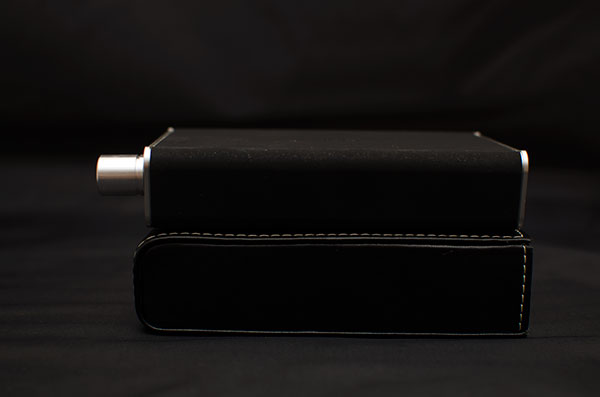 This is the HP-P1 meal ticket, the mojo which is going to tempt a lot of people to buy this over the Labs SOLO and amp combo. It is a small form factor combining both the DAC and Amp which is lacking on the CLAS only unit (and still is as of 2013 with the newest -db revision). With the CLAS requiring separate amplification the HP-P1 effectively lowers the stack by one level making it a far more portable and elegant solution. Sitting side by side with the CLAS plus RX MK3 amp plus an iphone the benefits of one stack lower is pretty obvious but that does mean the DAC and amp better perform as your out of luck if you want to change the sound signature or power since the amp is fully integrated. You can use the line out at the back of the HP-P1 for further amping but then you are back to a 3-stack and the benefits are lost. The HP-P1 retails at just over $600 also so slightly more expensive than the CLAS though cheaper once an amp is stuck to the back of the CLAS by a few hundred. 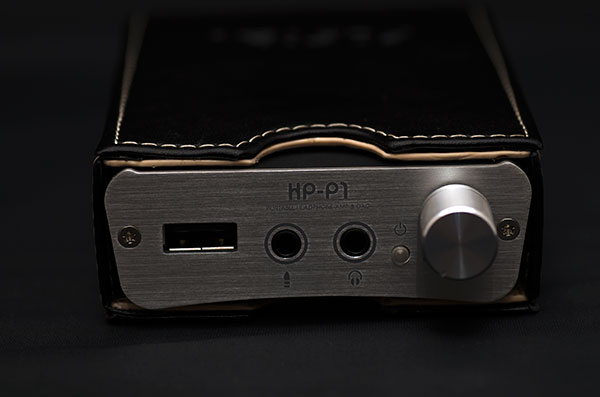 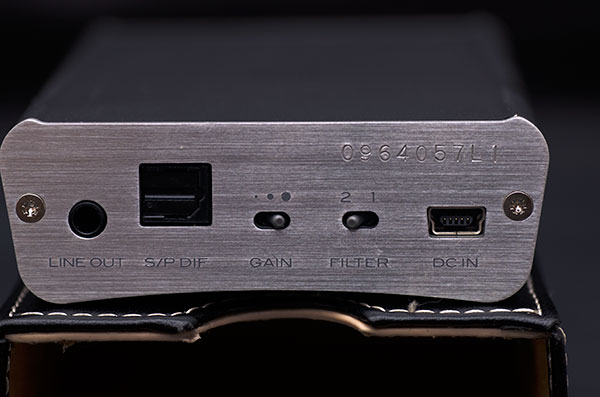 The HP-P1 being a combo DAC and AMP has a few more features than the standalone CLAS SOLO DAC unit. The front sports the rather longish volume pot, standard usb input for the USB to 30-pin connector to the igadget, an aux line input for non Apple DAP’s and a 3.5mm headphone output. On the back you have a few more juicy extras including a line out and spdif out to bypass the HP-P1 amp plug into a system of your choice, a 3 gain switch, a dual filter for sound enhancements and the DC in which is 5v mini-USB. This does not connect to a PC by the way in much the same was as the CLAS does not either for audio playback from the PC but can input from your DAP into a system courtesy of the spdif and line out. The usb at the back is purely for charging purposes. The volume pot is a very well crafted and stable but does protrude a tiny bit. There are detectable levels of imbalance at the really really low end of the pot but nothing that anyone could make out once you go beyond that low level which you really have to do to actually hear anything. When I mean low I mean barely audible low.

The Fostex HP-P1 sports a 32bit AKM AK4480 DAC and a built in 80mW amp which is not the strongest of amps in the world but very good for more efficient lower impedance headphones and earphones which require a bit more of a gentle touch on the dial. Higher impedance headphones over the 300ohm mark will struggle slightly with the HP-P1 compared to a CLAS with a decent amp loosing a bit of meat and richness at the lower end without really good amplification. if anything the HP-P1, being a portable solution, works best with equally portable headphones at the 32ohm level and below.

I think by now I am hinting at an amp that tonality wise is spot on for me. It is smooth, spacious without any hint of spike and a great deal more liquid than the spikier and brighter CLAS Solo but the weak spot is the amp reproduction which, given its power limitations, can often sound too laid back with a weaker slam or bass response than the CLAS strapped to a really good amp. Of course the trade off is your spending much less on the HP-P1 than the CLAS Solo and a good amp and it is much more portable so those with IEM’s may indeed actually prefer this smoother response on their more delicate and sensitive setups. In the end it is going to come down to matching really for IEM’s. 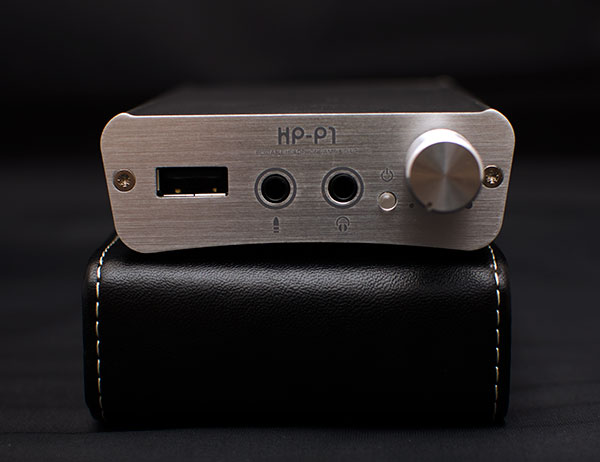 My UM custom Merlin’s are already quite warm and laid back with a big sound stage so more often than not I tend to throw in silver cables and a neutral amp to get the right balance. On the HP-P1 I found the combination to come across a bit too laid back but still with a great sense of space and smooth coherent playback. Some may like that actually so I guess it is down to personal preference but a bit of top end sparkle is really needed for Merlins to shine. Throw on a pair of “Rock It” RH-50 dual balanced armature earphones and this is where the Fostex HP-P1 comes into its own taming the typical dual balanced armature top end brightness, adding plenty of sound stage and fantastic detail in a smooth almost buttery wrap. I am going to hazard a guess and say anyone sporting multiple armature IEM’s will enjoy the Fostex HP-P1 a lot.

Throwing some headphones into the mix had varying results. This didn’t work for me with the more bass driven cans that are usually inherently darker such as the TMA-1 and Beyer Custom Pro One and it really can’t drive the picky AKG K501. The smoother warmer tonality and lack of bass slamp muted the Aiaiai cans somewhat and the Custom Pro is all about bass though an easy enough headphone to drive I just felt the synergy wasnt quite right.As for planers well the Fostex is fine with the HE400 (though production rev 1 is too dark to shine on the HP-P1) but not that lively on the more demanding planers such as the LCD-2 and a no go for the HE6 which after being driven by 10w of magic from the balanced Schiit Mjolnir sounds wholly inadequate on the HP-P1. Then again I am not sure why anyone would want to pair a HE6 with a portable rig like this, its not made for this setup to be honest. I had much better results with cans such as the Amperior and Momentum which are inherently portable and easy to drive but had a slightly more balanced tonality.

The HP-P1 sports a dual filter setting marked simply as 1 and 2. Selecting either is going to change the tonality and dimension of the sound somewhat and depending on your setup this is going to be noticeable or at best subtle. For me filter 2 was the better choice for my listening preferences sounding smoother more aggressive and full bodied than the airier filter number 1. Vocals take a slight backseat on the filter 2 but the imaging and lower end is superior for me than filter one which has a greater focus on upper articulation. Again this is going to come down to personal preference. Certainly matching wise the UM Merlin’s performed much better on filter 1 than filter 2 so again match carefully and both filters do have their benefits.

CLAS solo or the HP-P1? Depends on what you want to do with it to be honest. The HP-P1 really comes closest to matching the intended purpose of using igadgets. It is mobile, easy to use and small in form factor and work very well indeed for some portable headphones and better with IEM’s. It’s laid back non-fatiguing tonality would be my go to for out long listening periods over the more hardcore CLAS. Those who wish to get a little more out of their amplification but retain the benefits of a world class DAC might look to the CLAS instead for a more flexible solution and don’t mind spending a bit more for a transportable rather than portable solution.