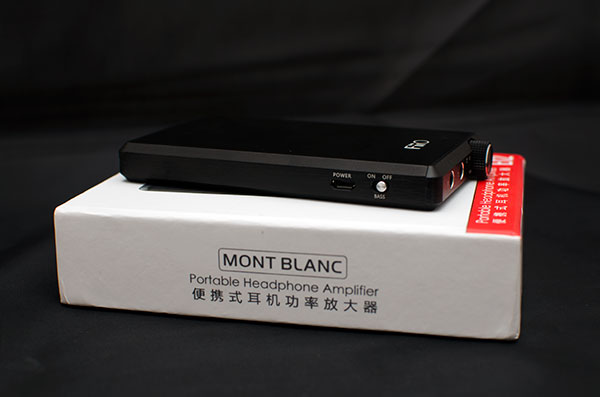 FiiO’s lineup of pocket amps and DAC’s have been very well received and considered bang for buck for those on a tight budget but still striving for something above average. Everything is well crafted, well marketed and well received but perhaps lacking in one area that new manufacturers are increasingly paying attention to and that is the power game.

The ‘portable power’ market is driven by the increasingly popular planer market and new flagship cans that can be a touch more demanding or difficult to drive under normal amping circumstances offered by say the E17 or even the E11. On top of that though the E11 was very well received, for many it did feel that there was still room for something a bit different in portable amps missing in the FiiO line up. 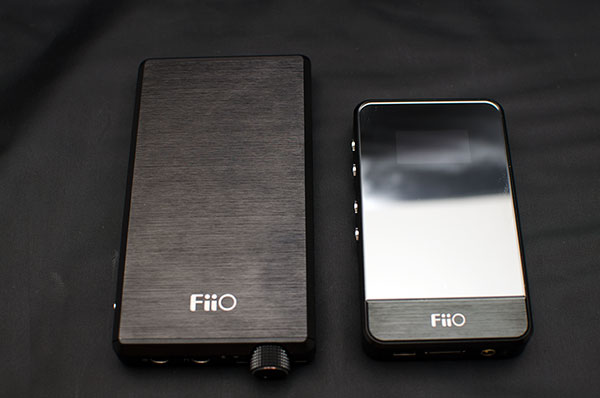 One look at the E12 and the first thing that will hit you is the size. This is a much bigger proposition than previous portable incarnations being roughly the size of an iphone 4 and only the desktop FiiO E09k being bigger. The same high level of engineering has gone into the E12 though and it is a thing of beauty for $120. Some of the newer thinking in FiiO’s previous units have also gone into the FiiO E12 with a gain and bass boost and it also sports a crossfeed switch.

Well I say switches but in fact they are recessed filters that you can only change with the aid of some sort of small pick or metal hook because you really cant change them without the aid of these. The bass boost you can but not gain and crossfeed. I found this curious and perhaps the decision making in recessing comes with the same reason why you need a fair amount of force to move the volume pot as well in that FiiO really don’t want you to have a nasty accident when stuffing this in a pocket. 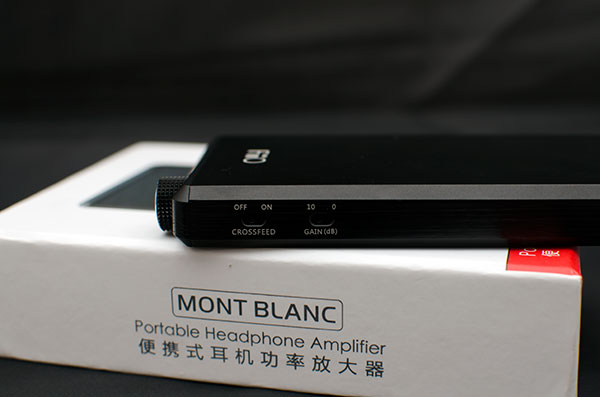 Size wise though I am not sure this really is a pocket type amp unless you have a large inside blazer pocket of the type I used to wear in the early-90’s. Its a slim amp but a long amp and those with an iphone will have a feel for how big the E12 is as it is just a little bit bigger than the iphone but more or less the same form factor. Personally I think its their prettiest and best constructed amp yet and miles better than the E11 but I am wondering why they didn’t go for the protected volume pot or a stepped pot than as stiff alps type pot because its not that easy to manpiulate the pot on the go to be honest. Just a little looser maybe or a stepped pot would have made a big difference.

I do understand though what they mean by the worry of hitting the volume pot by accident because the E12 is a seriously powerful budget audiophile amp and can do some serious damage on higher levels on low impedance cans and for me not an IEM headphone amp. The fact I can plug in a HE6 and get good volume before the dial hits 12 noon on a sub $150 amp is testimony to the power of the E12. Nevermind any quibbles you might have on the tonality – it is sub-$150 and it drives the HE6 and that my friends didn’t exist in the market last year. Instead we had to fork out maybe $350 for the Ibasso PB2 or upwards for the ALO Audio RX MK3 and desktop solutions starting at $500 up to $2k to get any real power. Now $120 gets the job done. That is impressive to say the least. 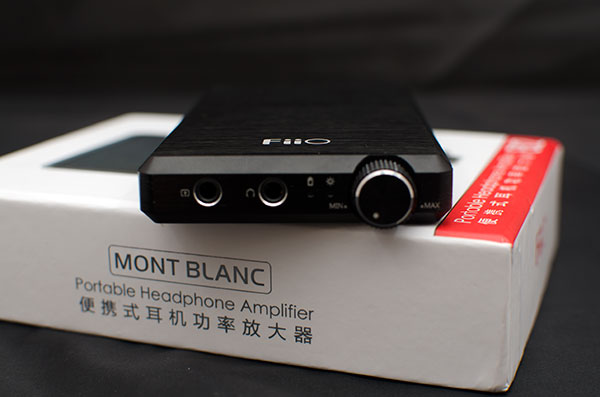 However there are shades of getting the job done so if you are forking out for the HE6 then one might suspect you have enough collateral to buy something equally good to power it and that is the irony of building a budget amp for headphones that might have a high end audience. In all likelihood HE6 owners will be thinking Mjolnir and Gungnir desktops than powerful budget amps. That is not to say if you have $120 spare after buying a HE6 that you should ignore the E12 – if all you have is a few spare bucks then the E12 is a good stop-gap for power until you get your full system sorted. But how many are in that scenario? Not many I would guess. Go down a few rungs and you have a few planers and hard to drive headphones though that make total sense for the E12 if the tonality matches.

Out of the box the E12 has an inherently warm tonality with a rounded top end and a tight bass that doesn’t hit terribly deep or boomy but does give impact when required. This is a more considered amp than the E11 which, whilst initially very exciting, did eventually feel a bit rough around the edges and perhaps overly bassy and dark for some making it a difficult amp to match if dark and bassy is not to your taste. It also create a much bigger and airier sound stage and far superior articulation and clarity than the muddier and “in the club” feel of the E11.

Note though there is some ongoing discussion on the gain and “bass boost” tuning with FiiO looking at increasing the bass boost somewhat for sub-bass and correcting a gain labeling error on the initial batch which showed 10db for the gain instead of the reported 17db that it can actually do. Not sure how that will sound in the final rework as either a higher gain setting label or a plain gain plus or minus selector but either way its likely the big batch run in April 2013 will have some minor revisions based on initial feedback. Personally I like the way it is right now without that bass bias tuning and the more natural and transparent production. 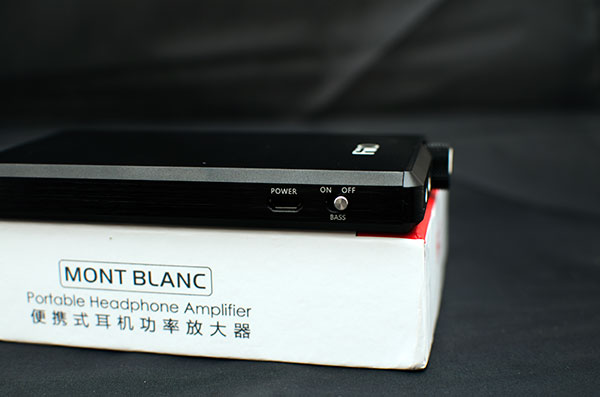 The bass boost itself is actually quite a subtle affair compared to the flat or off stock mode rather than insane dark basshead tuning of the E11. Rather than a dynamic increase in impact it adds a bit more texture, body and quality to the bass than stock mode. The effect on lesser headphones might not be as detectable as more articulate cans but it is noticeable and normally I just leave the bass boost on for most listening sessions. Importantly the current bass boost revision kept the whole reproduction coherent and transparent without any great swing to a bass bias.The proposed move of the center frequency in the bass boost from the current 20hz to 40hz should give a bit more weight to the sub-bass but unlikely to disturb the smooth playback I am getting from the pre-production run considering the E11 is 80hz.

Well we talked a bit about the HE6 and power wise this is a portable amp that has enough power to drive the HE6 but tonality wise the slightly edgier highs and smaller sound stage inherent in the E12 didn’t have quite the best match for the HE6 and as mentioned before the HE6 is really a desktop headphone for pure performance. It’s good for $120 but wont get the best out of the HE6 but certainly better than some $250 amps I have tried with the HE6 which clipped and died around 2-3pm on the pot.

Throwing on my perennial favorite, the K550 and the balanced slightly warm tonality was a good fit for me. The E12 produced a slightly thicker and deeper reproduction and trimmed the edges a bit of the highs that can sometimes grate if poorly matched. It didn’t have the beautiful flowing warmth I enjoy of the Just Audio uHA-120 and the K550 but it was a pretty respectable showing and those on a budget could do a lot worse than matching a K550 with an E12. 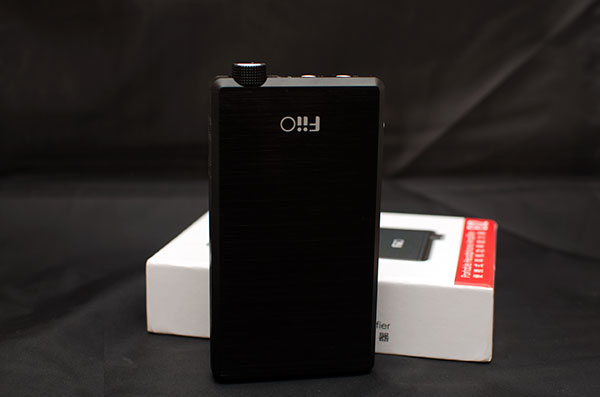 The HE400 (note mine is rev 1) was an excellent match with the E12 giving it a bit of zip and pop in an otherwise normally dark but easy to drive planer headphone. So to also the ESW9, the M1 and L1 which are generally considered dark or warm headphones. Throwing on a few Beyer models and the Custom Pro One matched very well with the E12 giving it plenty of drive and musicality especially on the Custom One Pro’s favored beat centric genres. The COP can be a tad thin on the mids so slightly less dynamic results on rock genres but you don’t really buy a Custom One Pro for that (more about the COP in my up and coming review). You buy this for bass and rhythm and the E12 did a great job of keeping sharp, impactful and tight. The E12 with the Beyer T1 was an interesting match. Plenty of power and actually nice tight impactful bass again but further up the spectrum I found the tonality to be a bit harsher and grainy and not quite as liquid and fun as some dedicated or hybrid tube matches such as the Continental or Woo Audio. Give me tubes over solid state anytime for the T1. That is not a criticism of FiiO just a general preference for my beloved T1.

Where does it stand among it’s peers? If power is the top deciding factor it has no equal sub-$150. It lacks the clarity and articulation of the Ibasso PB2 (one of the most powerful sub $400) but the more rounded tonality of the E12 may win out on neutral to bright headphones which the PB2 can sometimes be a cold or somewhat harsh option. It doesn’t possess the liquid warmth or stunning flowing mid-range reproduction of the Continental but has a stronger bass kick than it’s tube cousin and a touch more power for the planers. The RX MK3 is probably the master for power but then you have to go $600 to get that one and for some that might be a price too far. The Just Audio uHA-120 is probably a slightly more musical and smoother amp for the likes of the K550 but of course like the MK3 you have to pay top dollar for that one though well worth it. 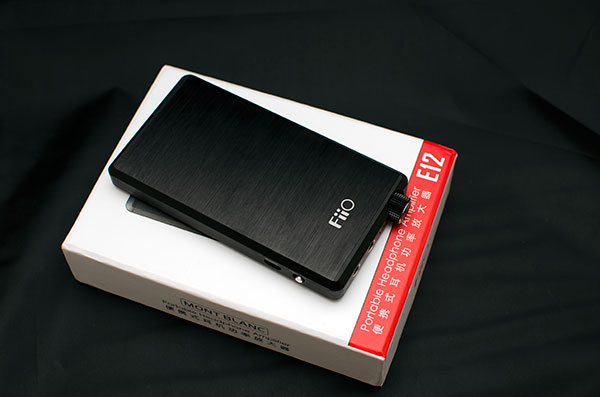 You have to remember guys this is a $120 amp and the fact I am comparing it to $500 portable amps tells you that FiiO have a powerful proposition that slays everything at a similar price but has a few quirks that still need ironed out for me to say that this will be as good as it gets for the E12. If they find a slightly looser pot, work on those recessed switches and get that center frequency sorted on the bass boost then I think the E12 could be the mandatory choice of most looking for a great amp without busting the wallet for headphones. It can drive an HE6 but honestly if you spend that much on a headphone don’t skimp on the amp and even less so for IEM’s given the power. Think of the FiiO E12 as a great fit for cheaper planers and hard to drive headphones who need a bit of oomph without loss of control or too much bias to the top or bottom end.