The iBasso DX160 is the company’s slimmed-down reinvention of their larger DX22o series DAP but still retaining Android and a beautiful screen. It is priced at $399.

You can read the full review here now.

Disclaimer: The iBasso DX160 was sent to us as a sample in exchange for our honest opinion. We thank iBasso for this opportunity.

The Mid-fi DAP market is really hotting up in 2019. Not just because all the major players are launching sub $500 DAPs in the short space of a few months but also the massive leap forward in technology they are stuffing into them. It was not so long ago that physical jog-wheels were the order of the day. Now we have Oreo 8, lightning-fast processors, touchscreen, and modern form factors for similar prices.

Step forward iBasso and their new DX160 which just arrived in the office a few days ago. This new mid-fi $399 DAP will compete head-on with the likes of the FiiO M11 and the HiBy R5 and brings to the table a ridiculous level of advanced features for the SRP.

The number also suggests a similar approach to the DX220 and indeed some features have trickled down into the DX160 from the DX220. If the DX150 is the baby brother of the DX200 then likewise for the DX160 and DX220. If interchangeable amps are not important to you then the DX160 is a superior DAP to the DX150 IMHO.

So the trickle-down feature set from the DX220 is excellent. Not only do we have a smaller 5″ version of that beautiful 1080P multi-touch capable screen but we now have an ability to switch it from 1080P to 720P for battery life and performance which is on par with the latest DX220 firmware recently released.

We also have a dual DAC setup using 2 Cirrus Logic CS43198’s which if you have read our HiBy R5 review you will know these are the same chips used inside their similarly priced DAP. Of course, chips are not everything and to that end, iBasso has thrown in a very powerful but fixed amp stage capable of up to 6.4Vrms balanced and 3.2Vrms unbalanced. We get 4.4mm and 3.5mm outputs but no 2.5mm TRRS like the slightly more expensive FiiO M11.

Oreo Out Of The Box

Android Oreo 8.1 is installed out of the box which is consistent now with the rest of the DX series of DAPs and matched only by HiBy and their R5 at the same price. The M11 still comes with Android 7. Like the M11, however, the DX160 does not come with Google Play installed. Instead, you get two 3rd party app services, Cool APK and APK Pure which do a nice job of getting around the regional locks Google has but does not have the same level of apps support as Google.

The final key feature to highlight in our First Contact is native MQA out of the box which no other DAP at this price point has. Granted, the R% native MQA is on the way and should be getting a firmware update pretty soon but if you are impatient, then the DX160 is the choice as of today.

iBasso tends to have a fairly set packaging scheme for its mid-range products right down to the IT01. The DX160 falls into this scheme with a fairly compact silvery-blue vinyl sleeved flip-lid retail box similar to the IT04 and IT01s. It is not as fancy as the angular DX220 slider case but then something has to give to get it down to $399.

Inside you get a small envelope stuck to the lid of the box with some warranty and manual leaflets plus an MQA card just to remind you that the DAP can do MQA out of the box. The DX160 is fairly well protected with a peel-off black label on the front which you take off before applying any screen protectors.

The accessories can be found underneath and it is functional without being overly elaborate. You get a silicone case instead of a leather case this time, 2 screen protectors and a very nice 1m nylon jacketed USB-C to USB-A cable for charging and data. The silicone case is pretty tight actually and with a nice cut to it so it does not add too much bulk to the DX160 form factor. 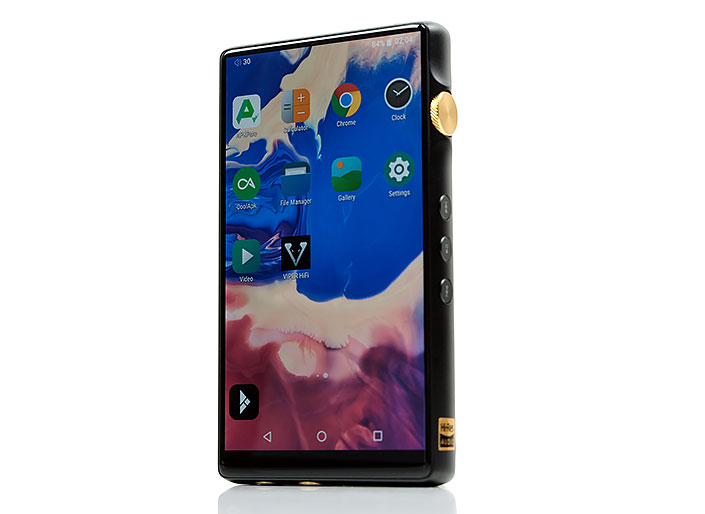 The DX160 is not the smallest in its class, but it sure is the prettiest. The 5″ 1080P screen dominates with a virtually borderless design that will appeal to modern smartphone users a lot. Borderless means even though it is a fairly large screen it does not translate into a large DAP.

But this design is more than just a big screen. The fixed amp stage allows iBasso to thin out the form factor measurably. With the older Amp card designs, the DX150 had to be on the fat side to accommodate and side by side the DX160 is tiny, svelte and very pocketable.

The CNC machined aluminum chassis curving is also very comfortable in the hand. The comfort level is aided with a relatively light 170g weight. That is slightly heavier than the 160g HiBy R5 but much lighter than the 211g of the FiiO M11.

It does follow some of the DX220 legacy design though with a low-profile volume dial though this time it is gold on black instead of silver on grey. The three playback control buttons on the same right panel remain giving it that quasi-Sony look to the design. The base panel has the 4.4mm and 3.5mm balanced and unbalanced outputs in matching gold-plated sockets and a single microSD open slot on the left panel.

This version comes in black but I am sure you have seen a few of the ads around of late that show that the DX160 will come in a wide range of colors including red, blue and silver. I prefer black as it really enhances that borderless screen effect.

This time there is no Mango dual boot for the DX160 OS, its pure Android Oreo 8.1 from the bootup. iBasso has provided Mango as an app much like it does with Android 8.1 on the DX220 and DX150.

As mentioned, there is no Google Play, instead, you have access to Cool APK and APK Pure for apps management. For some this is a deal-breaker, for others like me that have no regional access to TIDAL, I find these two apps stores mandatory. YMMV.

Ok so just to fill you in quickly on some of the hardware behind the DX160 that does influence Oreo’s performance.

The first is the CPU. iBasso has chosen to go with the same Arm Cortex Octa-Core as you will find in the DX220 which is slightly behind the Snapdragon 425 inside the R5 though the results from AnTuTu are very positive. Neither DAPs are as lightning fast as the Samsung Exynos 7872 inside the M11, something which FiiO nailed at this price point or any price point for that matter.

The RAM has been pulled back from 4GB to 2GB which is similar to the R5 and 1GB less than the M11 so brownie points again to FiiO. However, the screen now is a shade smaller and you do have the option to switch to 720P which should be less of a drain on resources. That 1GB reduction is not that noticeable in our subjective testing unless you need huge buffering for hi-res streaming or planning on opening up a huge amount of apps at the same time.

We also did our AnTuTu objective testing whilst it was fresh out of the box. What we did note that the latest firmware has the DX160 clock rate up to a faster 1200MHz which matches the DX220’s current clock rate but 200MHz slower than the R5 Snapdragon ceiling of 1400MHz.

We also loaded the DX160 with a few apps to represent a more normal operating setup such as TIDAL, Spotify and BubbleUPnP. WiFi and Bluetooth were turned off during testing and screen brightness at 100% and 1080p.

Rather than do a quick comparison with other DAPs I thought I would draw your attention to the difference in performance the screen resolution has on AnTuTu results.

Now at a high level, the DX160 performs as fast as the R5 and R6 Pro, no issues there. The screen resolution, however, when dropped to 720P does seem to give the DX160 a small boost in performance. Something to ponder over when doing the main review.

You will note that I got a score of 0% on the GPU, that may be an app incompatibility with the DX160 set up so we will rerun this a few times to confirm in the main review.

Ok so let’s get the efficiency out of the way nice and early. This DAP is deathly quiet with all my super sensitive IEMs including the Solaris. You will not hear an iota of hiss in both balanced and unbalanced output at any volume level. iBasso has done an amazing job getting the amp and DAC noise levels down to possibly the lowest I have heard on any of their DAPs to date.

One thing to note in the Mango app is that gain is now only low and high so they have done away with the DX220 medium gain setting. Having said that, even high gain with the Solaris shows no signs of hiss though the amount of playable volume is very low at just 5-7 steps max from zero balanced and about 10-12 unbalanced.

Coming from the R5, the DX160 sounds a little more neutral on initial impressions. Using the Solaris, the low-end has slightly less sub-bass rumble and a more linear response when paired with the DX160. On the flip side, the DX160/Solaris tuning seems more expansive and complex on imaging and staging width with the R5 sounding the more intimate of the two.

I also think the DX160 might be teasing out a bit more treble presence and articulation whereas the R5 seems a bit more attenuated though not by much. Both use the same DAC but I suspect the amp choice and software side ALSA algorithms each use are different, hence the subtle changes in tuning.

What I can tell you already is, that independent from A/B testing the DX160 sounds really articulate, clean and nicely balanced with the Solaris and 64 Audio tia Trio. It is crazy this is kind of resolution and tuning is now possible at this price point.

I also suspect that Meze Rai Penta owners will really enjoy this pairing as well. The mix of detail and clarity from the DX160 combined with Meze’s fairly natural, almost analog timbre sounds really good to my ear. 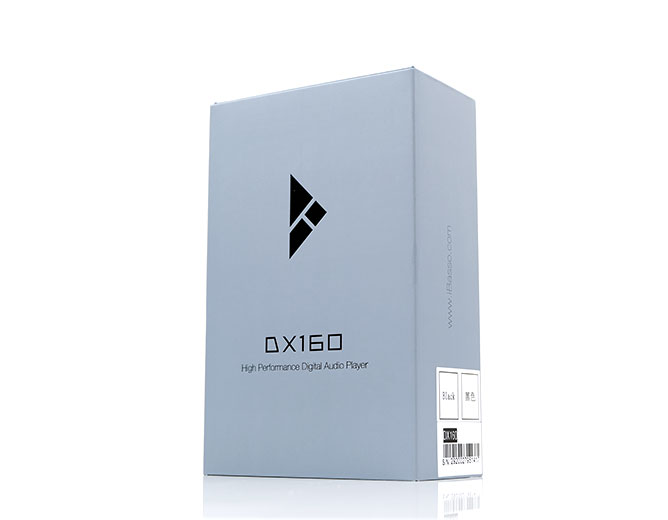 The DX160 is definitely bringing something different to the table. Even at this early stage, you can point out a few key areas iBasso are working really hard at including most importantly sound quality. This is a hiss free DAP with super sensitive IEMs which is very rare these days on analog amps. It also looks gorgeous and it feels fairly compact in the hand. OS speed seems pretty decent also given that its 2GB as opposed to 3GB.

It is too early to say if the battery life will hold up. Specs are saying 13 hours but we have not had enough time to say how accurate that is what the optimal settings are to keep it from draining. I also want to hear how well headphones can be driven from that 6.4Vrms 4.4mm balanced output. The R5 did a very good job indeed so there is some stiff competition, which, at the $399 just sparks me for joy.

And joy is a general word I would like to use here. Not just for the DX160 but for all these new DAPs coming in sub-$500. The advances in technology and capability are incredible. This will be a fun one to review so stay tuned!