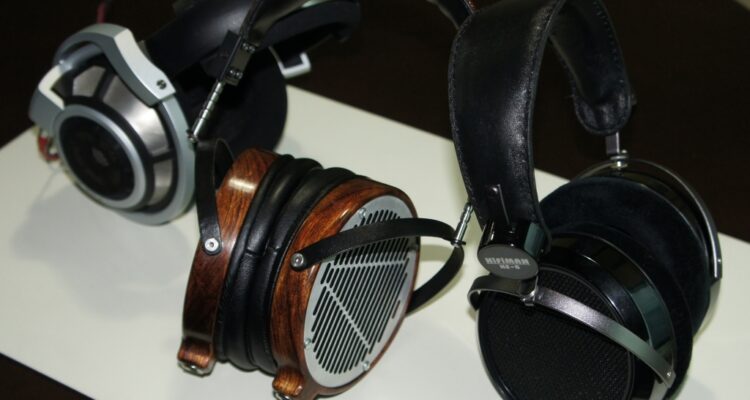 Very few phones can touch the HD800 in this regard, and unsurprisingly, both the orthos simply couldn’t compete. But as far as I’m concerned, the king of the hill when it comes to headphone soundstage, is still none other than the legendary AKG K1000. During my stint with those cans during last December’s Ken Jam, it dawned on me that those AKG’s are certainly in a different league altogether when we talk about sonic imaging depth and width, mainly due to the peculiar design in which its highly articulated drivers are suspended in front of your ears. However, the HD800 has a trump card up its sleeves by having a better bass repro than AKG’s “ear-speakers”. The K1000, on the other hand, with all its glory, I found relatively rather light footed and tilted towards the trebles.

But anyways, back to the 2 orthos: among the three cans present, the only can that didn’t have an angled driver configuration was the HE-6, and to me, this translated to having a relatively shallower headstage compared to the LCD-2, and lesser still when compared to the HD800. To my ears, its sonic placement and imaging were relatively less defined and has a bit overly expansive soundscape, whereas with the LCD-2, at its sweet spot volume level, simply felt innate and conveyed live space better with pin-point imaging to boot. While the Senns had a slightly narrower soundstage compared to the two, it conveyed better real life space and depth than the orthos.

Unfortunately, given the limited time we had, I opted not to delve much into these particular aural aspects of the review. Although on paper the orthodynamics may have have the upper hand on the dynamic driver Senns, I feel that in real world listening, the difference is not as significant.

This is perhaps the most sensitive sonic aspect as far as I’m concerned, simply because I’m treble sensitive! I notice that some people regard bright headphones as having excellent treble repro, but it shouldn’t be the case. Granted that they can be analytical as hell, but the most crucial criterion should always be having the correct tonality and not how energetic and extended it can go.

One factor I’m quite particular with (OC even) is sibilance, and how each headphone handles this area of concern. Let me ask you this: Have you ever in your life met and told (or at least thought) someone that her/his voice is too sibilant? Personally, I cannot take this unnatural tendencies among some audio gears in exaggerating the letter “S”, either I try to tame it with complimentary and neutralizing gear along it’s signal chain, or I just avoid them at all cost. And quite sadly, the HD800 (with the Cardas cables) does have this propensity to exhibit this exaggeration. The HE-6 on the other hand, felt more natural, albeit having a tinge of electronica at mid treble, certainly not as liquid nor analog sounding than the LCD-2. The Audez’es’ treble repro (specially with the Mundorf cables) feels unamped and downright unadulterated.

Here is where I truly felt the orthodynamics had the upper hand over the dynamic driver Senns. Whilst the HD800′s mids seemed to be on the hard sounding and dry side of the fence, the two orthos were denser and more palpable, moreso with the LCD-2. Certainly, vocal reproduction is the Audez’es’ pièce de résistance, for not only does it convincingly get across the natural plump fleshy texture of the human voice, it does it in a manner that it somehow engulfs your senses. It’s extremely convincing, I could swear the singer is breathing and expelling lung full of air right in front of you.

Now, this is where it gets pretty tricky to me (as opposed to bro Marcus’ there). The LCD-2 is perhaps the only full size can ever to exist in market which has perfect linearity from 1kHz to subsonic levels (20Hz to 10Hz and even further below – yep they go way lower than the HE-6 without rolling off). Sub-sonic audio signals will reverb and crawl up your skin without even hearing them, man, these cans can really go seismic on you!
But its engineers’ greatest achievement in driver design is the biggest audio conundrum I personally find in these cans. Why? If your coming from Grado or the Alessandro, you’d most certainly have attuned your ears to thumping midbass, and without it, you’ll feel less involved and somewhat lacking. The L’s clearly doesn’t have the usual mid bass hump that is present with the majority of phones (the HE-6 and HD800 included), for it’s totally ruler flat! Of course, this is pretty much a non-issue for neutral cans owners, such as the DT48, SM3 and even the JH13. Good thing that by simply bumping at 150Hz point EQ slider sorts this all out (yes, I’m an EQ user/believer).
Build Quality and Ergonomics:

Hands down, the HD800 takes the cake on this one. In spite of its mostly polymer construction, the Senn was inch perfect up to the last detail. I do find some build quirkiness on the hand made orthos, the logo on the HiFiMan was a little off to me, while the LCD-2 is definitely the heaviest of the three (the Senns weigh like feather in comparison). Still, comfort-wise, I found the pads on the HE-6 to be ridiculously stiff, I really didn’t know how to make of it, the pads L’s felt positively snuggier and more supple making the headband clamp and weight more manageable.

Well, I surely didn’t expect that I would prefer the HiFiMan over the Senns at the end of the day, it’s just that sonically, the orthos have an obvious and distinct advantage over the dynamic drivers. Then again, it all boils down to one’s particular proclivity on how they want to listen to their music, so as always, YMMV and the usual disclaimers apply.