Measured 66Ω and 104dB in sensitivity, the MACH 80 doesn’t look relatively efficient on paper. From actual experience putting the MACH 80 on different sources, it is not very picky and works pretty well even on the laptop and phones. In most cases, the MACH 80 is completely quiet in the background, even at higher gain on DAPs.

Of course, stronger DAPs such as the Shanling M9 or an amplifier like the Soncoz SGA1 will definitely be able to drive it to a fuller extent, but dongles like the Cayin RU6 work pretty well too to power it adequately and give it more coloring and dynamics in the midrange.

No matter what you are pairing them with, a USB-powered mixing interface or a desktop amplifier with very strong output power, the MACH 80 can handle it pretty well and not sound blurred up or distorted.

DAPs with power such as the Shanling M7 we have just covered could bring up the texture and weight for vocals and boosts the bass deeper with more energy. Whereas on dongles and laptops it will sound smooth, laid-back, and more relaxing especially with some slower beats.

The MACH 80 is responsive not only to power but to the quality of decoding when putting it with Amp/DACs like the RME ADI 2 Pro.

The detail retrieval power is even stronger, especially in the lower mids, and transients in the treble range are even more prominent. This is one of my favorite pairings so far where the MACH 80 sounds very balanced and extended, and every single element in the mix could be picked out at ease.

The positioning is also superb on this combo with the vocalist clearly separated from the backing instruments and imaged distinctly, working impressively well for live gigs.

With the Shanling M9 as an example of powerful DAPs, you could feel more support in the lower end the mid-range is denser with a stronger outline in staging like moving from an outdoor live arena to an indoor live event.

This combo extracts more details and better transients, bringing to the foreground harmonic tones and textures in string instruments. Though not as opened-up as on the ADI 2 Pro, the juicy texture has even better synergy with audiophile recordings and sounds more impactful and exciting.

I have also got some ear time plugging the MACH 80 into the Cayin RU6 which renders the output very smooth and relaxing. On this R2R device, the treble extends very swiftly and is intensified in the very upper mids, which pushes the vocal image more forwarded and empowers voices with better weight.

Differentiated from the MACH 80 by 1 driver, some call the MACH 70 a twin flagship with the MACH 80. This seven-driver system features proprietary single low, dual mids, and quad highs BA drivers connected by a 3-way passive crossover. This means the MACH 70 is one bass driver short of the MACH 80.

Noteworthily, the impedance on MACH 70 is just 42Ω and its sensitivity is higher than the MACH 80 at 110dB @ 1kHz, which makes its response to sources quite different.

The only visual difference you can spot on the MACH 70 and MACH 80 is the model number marked on the aluminum faceplate insert, the rest including the cable is identical.

The MACH 80 focuses on a balanced, monitoring-styled tuning while the MACH 70 is tuned to be more engaging, with a bigger and more energetic mid-bass that is closer than what I have experienced on Westone’s former flagship IEMs.

In terms of synergy, the MACH 80 leaves more room for users with strong amps and DAPs to push the IEMs to their limits, while being extremely detailed it is free from coloration.

The MACH 70 on the other hand is a step easier to drive and exhibits different qualities in the bass, being fuller and warmer that boosts the dynamic, stressing the intimacy between instruments than just clarity and resolution.

For those who are looking for a high level of detail and authenticity, a huge stage, and brilliance in the treble that is extending beyond the human ear’s threshold, MACH 80 would do the job.

And if the preference is towards stronger dynamics, more power in the kicks than dryer, cleaner monitoring style, MACH 70’s warmer and more elevated low end is more friendly, and it is also easier to drive.

The MACH 60 has a dual low, dual mids, dual treble BA driver configuration, and a different stock cable that is not as fancy as the one on the MACH 80. You will also notice the frequency response being not as wide measuring 8Hz to 20kHz, and the sensitivity is at 100db @1kHz with a 35Ω impedance.

In practice, the MACH 60 feels slightly less sensitive than the MACH 70 and the tuning approach is more similar to the MACH 80 which sounds clean and transparent. And when compared to the MACH 80 it is much easier to be driven on DAPs but does not have as much potential to scale up, also does not feel as wide in staging.

Again, there isn’t much difference that I could tell, except for the logo on the metallic faceplate as well as the different stock cable. The MACH 60 is lighter in tone on the body with a grey finish and is very well built like the MACH 80.

The MACH 60 feels like a more confined version of the MACH 80, which has a stronger roll-off on both ends and sounding not as expansive.

While having a similarly shaped tuning, the monitoring style is not as strong. The sibilance tones are tamer and the bass is slightly more upfront and thicker, though it is less as characterized as the MACH 70 which has stronger colorings.

The resolution in the mid-range on the MACH 60 is similar to the MACH 80, though you could feel the separation power being very decent but not as strong as the MACH 80.

Taking away the far-reaching extension on both ends allows more attention to be put on the mid-range with the vocalist spotlighted in the center of the stage.

With two more tweeters and a more premium cable, the MACH 80 sounds more polished and effortlessly extended, which is a clear step above the MACH 60.

The MACH 60 displays similarly tonal qualities and is easier to drive but feels like a work-horse version of the MACH 80. This is ideal for those who are subject to power constraints and listen outdoors mainly. 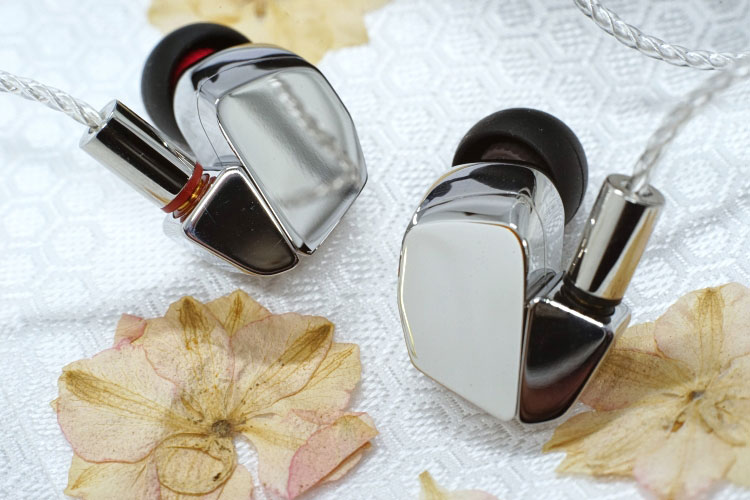 The Final A8000 has been around for a good while and it is still one of the most technically proficient single dynamic drivers with a pure beryllium full range driver that is able to deliver painstakingly strong transients performance.

Measuring 102db in sensitivity and 16Ω in impedance the A8000 is easier to drive on paper sounding louder on the setup than with the MACH 80. The source can alter its output tonality easier while the MACH 80 sounds more consistent across different DAPs.

The A8000 is ergonomically designed and comes in a glossy metallic housing with beautiful curves and reflects light at different angles, feeling like a piece of jewelry in the ears.

It puts together Japanese design philosophy and sophisticated sound chamber designs on the inside that regulates the pressure for highly controlled and dynamic sound, allowing it to maintain excellent control even at higher sound intensities.

The multi-driver MACH 80 clearly has a different product proposition in mind which suits professionals better, as well as trimming down the weight for extra comfort.

One practical difference would be tuning direction and impedance design which gives the two IEMs a very different tonal response when matching with sources.

The MACH 80 has a higher impedance and a flatter response allowing users to tune up the volume to extract more details in the mix, similar to active monitoring speakers that aim at presenting the mix truthfully.

The multi-driver configuration also allows the realization of stronger resolution in the sub-bass region and more effortless and steady extension to higher notes.

The A8000, limited by one driver, although being very wide in response, is still bounded to leaning to one side of the spectrum and will not sound as revealing and controlled when more elements come into the mix.

Despite this fact the articulation on the A8000 is excellent and the stronger character colors it more engaging with pops and electronic music.

The A8000 also sounds firmer at a lower volume with the MACH 80 needing a bit more power to catch up. When power is sufficient the MACH 80 has more potential to scale up and sound richer in the bass, while remaining flat and unintrusive.

The Westone Audio MACH 80 has superseded the previous generation products with superior visual appeals and stronger technicalities, especially the delicate control in the treble that scales with stronger outputs.

For those who are able to detect unnatural colorations or require a little alteration in the output, this monitor is capable of delivering the full spectrum authentically and spaciously. It cohesively binds different elements in the mix together and brings out strong but not exaggerated transients on both ends.

With an awesome fit and unbeatable light-weight design, the product experience is pushed further and is easily one of the most appealing options for those who are seeking a highly responsive, resolving, and balanced-sounding high-end IEM.