This is a review of the  Monprice Monolith Liquid Platinum Amplifier by Alex Cavalli, which is a balanced version of the highly regarded Cavalli Audio Liquid Crimson amplifier. It is priced at $799.99

Disclaimer: This sample was purchased by us and does not have to be returned. Headfonics is an independent website with no affiliate links or status. We thank Monoprice for their support.

Monoprice Monolith Liquid Platinum Amplifier
Yeah, I already have a feeling this is going to be an excellent outcome for the main review. I was not sure what to expect before my initial impressions. It is a curious branding partnership but it does work and works really well indeed with the Liquid Platinum Amplifier.
Slide here to add your score on the gear!11 Votes
8.5
Pros
Energetic rich sound
Compact design
Easy to roll tubes
Cons
Won't suit warm DACs
No Tube savers
8.5
Reader's Score
$799
Monoprice

The hybrid tube amp Liquid Platinum’s origins actually pre-date the Crimson despite it making the light of day long with a Monoprice sticker well after.

Call it the costs of production and the then relatively boutique nature of Cavalli Audio. It also was scaled back a little in terms of brute force power which allowed everything managing that power to be shrunk down a little with it.

Now, it is smaller, still with a ton of power (3.6W), and comes with both a single-ended and balanced topology (phase splitter design) whereas Crimson was just a single-ended circuit design.

The original Liquid Platinum prototype was making the rounds on some audio shows a few years ago before Cavalli Audio closed down so a lot of the donkey work was complete before Monoprice came in.

The Monoprice deal opens up a huge market audience to something boutique firms can only dream about, as well as getting that juicy price point that tips it more to the affordable side. 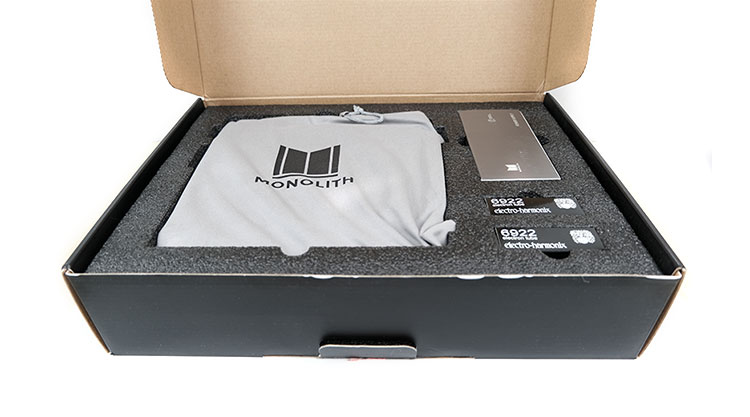 The packaging for the Liquid Platinum Amplifier is nothing fancy but it gets the job done. My black cardboard retail box arrived with a few dings on the outside but the amp was well-protected so it did the job.

Inside you get a polystyrene-type hard foam cut out that protects the various components, the amp in a cloth bag, some very nice 6922 Electro-Harmonix NOS tubes, and the power supply.

The cloth bag I guess protects the amp from dust and polystyrene bits from creeping into the tube openings and going on fire from any latent heat when in operation. You could sack it up when not in use also to prevent dust from creeping in.

There may be a cost issue there and certainly, noise might be a factor but given the size of the design, it was always going to be the case that the power supply is external rather than internal. This also helps keep the weight down on the main body.

A few things right out of the box. First, the Liquid Platinum Amplifier is a lot smaller than the pics would lead you to think. I would class it almost on the “cute” side size-wise and without the tubes in you could bag it and take it to the office without too much hassle. Transportable? Possibly.

The second is aesthetic. It is harmonious with its smaller sibling, the Spark, but bigger. I am not quite in love with the angular shape and vibe of a tube amp, I tend to prefer the retro SET stylings such as the Studio 6 from ALO Audio or the wood-inspired Auris Audio gear.

However, the Liquid Platinum Amplifier is pretty low-profile, quite modern looking, and robustly built. It will take a fair old drop to put this out of action and the joints or panel fits are fairly seamless also.

The little rubber feet add some welcome grip also, especially as I tend to put desktop units on tempered glass racks which can slip and slide if not securely in place. 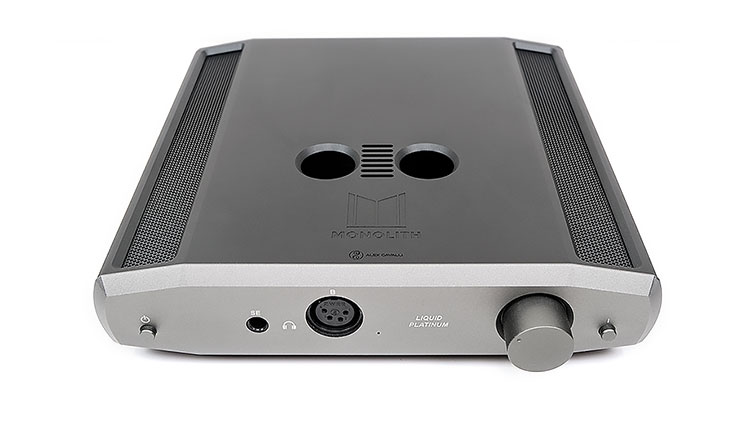 The tubes are top-loaded into some deep and fairly tightly spaced sockets. I would be looking at a pair of socket savers in the long run as the initial rolling is pretty stiff. You have to be fairly gentle to ease them in and out, at least initially until the socket loosens up a bit.

To the sides, you have some pretty long vents which are mandatory for me as the Liquid Platinum Amplifier can generate a fair amount of heat. This is not a design that should be stuck in a tight space as it will need plenty of ventilation. The size though makes it fairly stackable and at 1.5Kg not that heavy either.

The Liquid Platinum Amplifier has no internal DAC but as a standard analog amp, it’s actually packing quite a few useful connections.

You get 4 different types of amp variation with that phase splitter design that allows you to use them all in balanced mode if you prefer. You can go SE to balanced, SE to SE, balanced to SE, and balanced to balance.

On the rear panel, you have two SE inputs that are switchable. Underneath those RCA inputs, you have a small I and white dot icon denoting which input is which for a selectable switch on the front panel.

Beside the unbalanced inputs are the traditional 3-pin XLR balanced sockets and to the far right your switchable power socket. If you note, just underneath are some additional venting slots to aid in the overall cooling of the Liquid Platinum.

To the front, you have small buttons to the far left and right for power and selecting your input to output mode (remember the 1 and o at the back under the SE inputs). Front and center are your quarter jack SE and 4-pin XLR balanced jack outs with a very smooth analog potentiometer just to the center right.

The Liquid Platinum amplifier is a pure headphone amp so there are no pre-amp functionalities and no auxiliary 3.5mm line-ins either. If you want to run a DAP in LO to the back of the amp you will need a 3.5mm to dual RCA cable to connect it up. Otherwise, it is pretty much a standard DAC to amplifier chain.

There is a new Liquid Platinum Balanced DAC for $799 recently announced that is designed to stack and mate with the Platinum. That is something we hope to follow up with also some time in the near future but has been delayed. 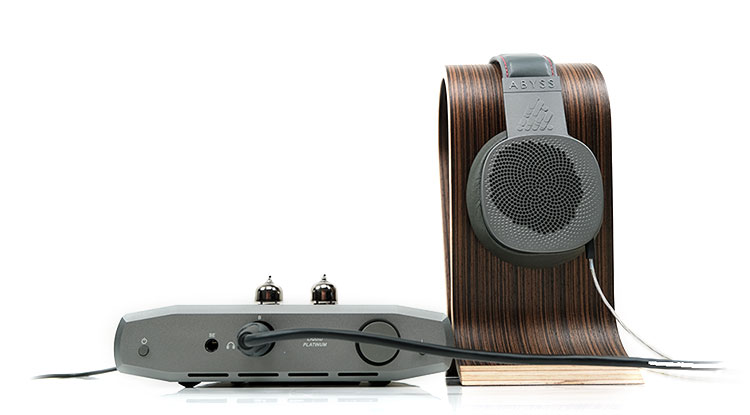 Out of the box I have put in about 100 hours on the Liquid Platinum Amplifier before forming our sound impressions. Testing was done with the excellent Rosson Audio Design RAD-0, Diana Phi, and the Meze Empyrean.

First, power. No issue here with a lot more on tap than the current office favorite, the Auris HA-2SE. Single-ended is very good but the magic of this amp seems to be more on its balancing output performance. It has plenty of slam and the dynamic range is excellent using the balanced stage.

DACs will influence the final tuning and I do find that a neutral and clean DAC is a better match thus far than warmer DACs like the Yulong DA10. The DA10 is warmish and full-bodied on the low end but a touch soft and fades as you progress up the FR.

The Chord Qutest shows off a better level of dynamic range and punch on the Liquid Platinum and also delivers better upper treble articulation. The clarity and PRaT are more convincing for me with the Qutest pairing. 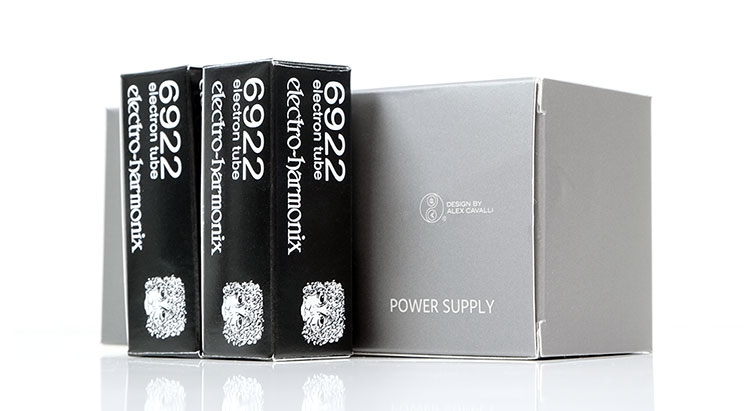 This is a full-bodied and punchy low-end, an even-harmonic balance up into the mids with a slightly forward but richly textured vocal delivery. I did some comparisons with the Auris HA-2SE and Qutest pairing and I found its stock tube presentation to be a bit more neutral, especially in the mids.

The Liquid Platinum treble is a little rounded and fairly wet and smooth but definitely not lacking in resolution. There seems to be a little uptick in the upper treble performance of the selected headphones for this initial run-through that prevented the pairings from sounding dark. Warm and a bit close maybe but definitely no veil or lacking in air.

I prefer the Liquid Platinum Amplifier with the Empyrean over the RAD-0, the tuning of the Empyrean seems to pair ever so slightly better for mids than the RAD-o. It is creamy in part but definitely not smoothed over with the Empyrean. This is a detailed and very relaxing listening experience, especially for soulful vocal performances. 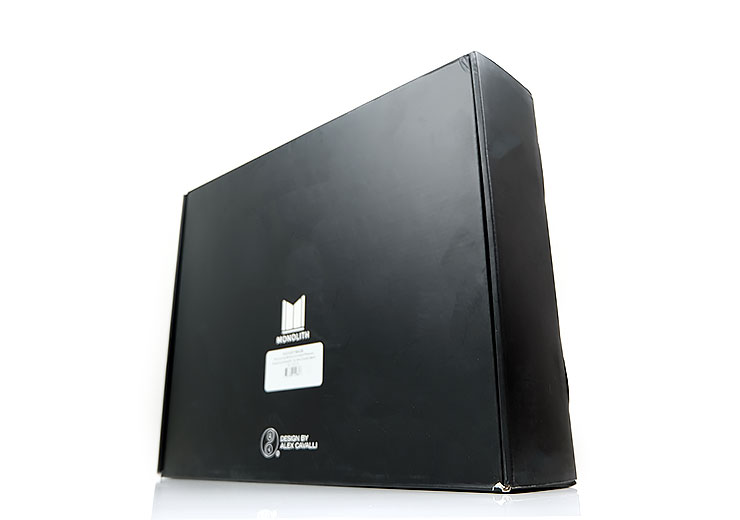 Yeah, I already have a feeling this is going to be an excellent outcome for the main review. I was not sure what to expect before my initial impressions. It is a curious branding partnership but it does work and works really well indeed with the Liquid Platinum Amplifier.

This is an even-harmonic, close, and mid-forward listening experience and is slightly less neutral-sounding compared to the likes of the Auris HA-2SE (stock tubes). It does seem to like a revealing source and I do prefer clean compared to warm DACs.