The Xi Audio Broadway is a transportable balanced/single-ended Class A headphone amplifier with both AC and battery power supply. It is priced at $2,299.

Disclaimer: The Xi Audio Broadway sent to us for the purposes of this review is a sample and does not have to be returned. Thank you to Xi Audio for giving us this opportunity.

To find out more about Xi Audio Products review on Headfonics, click here.

XI Audio Broadway
This is an excellent, compact, and very unique little high-end amplifier. It does not look like much, perhaps a little utilitarian but stacks beautifully with compact balanced DAC's such as the Topping D90 and the older Oppo Sonica DAC. The balanced design has some excellent grunt with minimal distortion levels and a low sound floor.
Slide here to add your score on the gear!32 Votes
9
9
Reader's Score
$2299
XI Audio

So, hot after we did our initial impressions of the impressive Monoprice Monolith Liquid Platinum hybrid tube amp comes another impressive headphone amp, the solid-state Xi Audio Broadway.

This is the full-balanced version and not the more efficient single-ended S variant built more for IEMs and easy to drive headphones. This one has a bit of power!

Now, we reviewed the Formula S flagship solid-state Class A amp in mid-2018 and chucked it the headphone desktop solid-state amp of the year award and rightly so. That was and still is, one heck of a resolving and sweet-sounding headphone amplifier. I tend to reference with this amp for pretty much every headphone review these days alongside the V281 from Violectric and the Auris HA-2SE.

It was a no brainer then that we would pick up the option to review the slightly cheaper Broadway to see if the engineering pedigree trickled down to produce an equally stunning performance.

The Xi Audio Broadway comes in two versions, balanced and unbalanced. The unbalanced is tagged as Broadway S and contains a set of dual RCA to the rear and an unbalanced 6.35mm output to the front. It also has a 4-pin XLR output but this is not a balanced output. The Broadway S also sells for a little cheaper at $1599.

The version in this feature is the fully discreet Class-A balanced version. It has a set of dual XLR to the rear and a balanced 4-pin XLR output at the front. Rather interestingly this is the first desktop amp that I have ever reviewed that also has a balanced 4.4mm output. That is going to be very useful with the likes of the SendyAudio Aiva planar headphone that comes with a 4.4mm terminated cable.

Output power is a pretty good 1500mW into a 32Ω load. That should be capable enough for most modern planars out there but a little shy of the kind of power I like to see for really demanding headphones like the Hifiman HE6.

The flagship Formula S, for example, is capable of 3-4W on a similar load and it would be that amp I would pull out for the ultimate in dynamic range and riving power. Still, the like of the Empyrean, RAD-o, and the Ether 2 have no issues being driven from the Broadway.

The really interesting tech inside the Broadway is the ability for it to be battery-driven as well as AC powered. Simply open up the top chassis plate and you will see 4 battery slots suited for Lithium 18650s. This allows you to come off the mains supply and potentially filter out a lot of unwanted dirty electricity as well as reduce potential grounding issues.

You can also charge the batteries via the AC supply when they run dry. The quality of the 18650s has always been a concern of mine as a vaper and the advice is the same as it is with the Broadway. Get some good ones. Most will say the “brown 18650s”. Normally LG branded ones last the longest and perform to specification. You can get cheaper but results may vary. 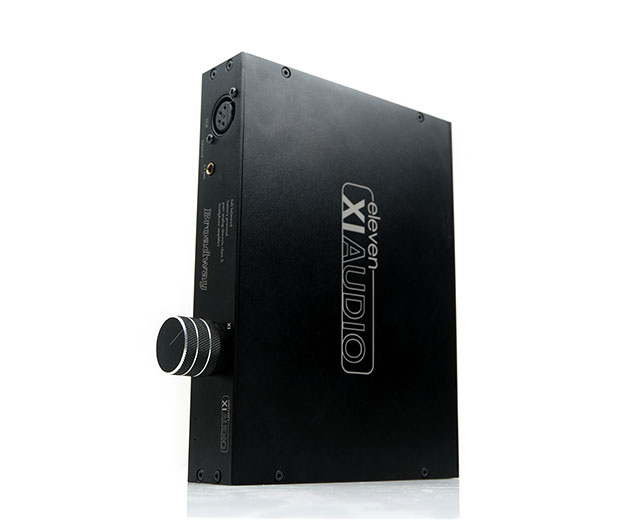 Sadly, my unit did not come in the official packaging being a sample unit but from what I have been told it is nothing to get excited about. It’s merely a brown box with some padding to protect the unit from shipping rather than some fancy Auris Audio style crate.

Inside you do not actually get the required 24V 1A external switching power supply needed which is strange but you do get a circular connector cable that will allow you to connect the Broadway to Xi Audio’s own dedicated Powerman power supply component. I had to source one in the local hardware store but you can grab them online for around $20 or less.

Batteries are not included either so you will have to source them also but they are not that expensive at around $10 each for decent ones. Make sure you buy rechargeable LG ones. Aside from that, you get a small two-page manual inside the box.

The Broadway has a certain utilitarian or industrial feel to it and not quite as flashy as the Formula S design. That being said, it is much smaller and lighter, small enough to sit beside your desktop setup at home or the office and not cramp your style. With the batteries, it weighs just over a kilo also so it is hardly a weighty amplifier either.

The old school boxy design has some fairly sharp cornering so that is the only thing I would advise caution on when handling but other than that it is a solid robust aluminum chassis with an all-black finish. All labels are in a very legible off-white front and back and its desktop stability is provided by some attractive silver tripod style rubber feet. The large alps potentiometer to the front is deep, smooth, and grippy. No complaints there so far.

To the rear, you have the XLR balanced analog inputs, the DC input, and the on/off switch. The on/off switch caught me out originally and I actually thought I had a DOA unit. It is a fairly stiff switch mechanism so you have to apply a little bit of force upwards until you hear the switch turn on and the opposite direction for off. You can actually push it in but this won’t power on the unit.

You will notice four screws on the top plate of the amplifier and this allows you to get inside and change those batteries if required. I found so far that I don’t really need to touch this after the initial insertion since the batteries should be rechargeable. The AC power will charge them and you can just leave them there until they die. Mind you, if you are not using the amplifier for a while best to slip them out in case they leak.

Xi Audio is stating around 6 hours battery life on a full charge which actually sounds pretty good given the output power of the unit and its Class A design. I was getting around 4-5 hours on a regular battery but once you up the mAh on those lithium tubes you can get around 6 hours no issues. I use the Sony Greens VTC6 3000mAh mostly due to the additional power they can offer.

One nifty little feature on the Broadway is the hardware gain control on the base of the amplifier housing. The gain is controlled via two small white switches per output stage in a red enclosure. You can set the levels to 10 dB (Low) and 16 dB (High).

Impressions testing was done with the Meze Empyrean and SendyAudio’s Aiva using the AK380/Dock balanced out system as the source.

I decided to work the 4.4mm with the SendyAudio Aiva first and switch between the Broadway and Lotoo’s PAW Gold Touch to see what kind of differences popped up. Obviously, there is more headroom on the Broadway 4.4mm balanced out with far more power on tap and you can hear that how much snappier and more dynamic sounding the Aiva is on that output compared to the PAW Touch.

The PAW Touch is fairly neutral so it is never going to be a gutsy musical signature and the Broadway seems to have a slightly smoother or sweeter timbre. One thing to note we are using an AK380 DAC-balanced line out which is a shade on the colored side for me. The Broadway is very transparent sounding with more capable modern DACs such as the Topping D90.

With the AK380 docked DAC pairing, the Broadway/Aiva presentation also had a bit more punch and weight on the low-end compared to the PAW Touch. Treble also sounds very stable, very articulate and not a hint of underpowered brittleness to its sound.

There is just a hint of dynamic range and power in the low-end fading when I take out the AC and go with battery power only. It is very subtle however which is promising as the first tested batteries are not LG 18650’s but rather some cheap OEM ones from the hardware store. Once we went with the Sony greens the dynamic range improved substantially.

Going XLR with the Empyrean so far sounds excellent with a punchy performance retaining an excellent level of dynamic range. It is not an aggressive sound mind you, the Violectric V281 is harder hitting in that regard.

I would say it does not stray too far from the Formula S tuning and retains that slight sweetness to the timbre. There is also some excellent clarity, a black background, and some great speed.

This is an excellent, compact, and very unique little high-end amplifier. It does not look like much, perhaps a little utilitarian but stacks beautifully with compact balanced DAC’s such as the Topping D90 and the older Oppo Sonica DAC. The balanced design has some excellent grunt with minimal distortion levels and a low sound floor.

Having a 4.4mm balanced output is quite unique, even in 2020, though the inclusion of a 4-pin XLR will probably work for most customers or users.

It does open up the Broadway for possibly inefficient monitor usage using balanced cables. IEMs such as the old Campfire Audio Vega have an excellent synergy though the noise floor is a bit too high for sensitive IEMs like the Andromeda and EE’s Zeus.

And yes, going with good quality lithium batteries not only unhooks the Broadway from the chains of a desktop system and wall wart but also does clean up the signal and produce a very black background. Well worth a demo for those looking for a compact high-powered analog amplifier.