Jolene is a thunderous richly textured and very powerful sound signature. Granted, its bass module can vary that opening gambit quite considerably, but overall, the tone is both smooth and natural with some fantastic bass and mids body from those four dynamic drivers right up to its max bass setting.

It is not a huge break from the Layla tone but rather is changes some technical aspects compared to what Layla brought to the table. Particularly, in terms of staging space with excellent levels of depth and improved stereo imaging. That power, therefore, does not come at the cost of instrumental separation or a diminished vocal presence.

For me, that also means I can crank up that bass module and still get some proper control over the dual dynamic driver low-frequency performance, something I was more cautious about on the older Layla/Bass module performance.

In terms of FR, the Jolene has more of a sub-bass bias and less of a focused mid-bass hump and by that I mean it peaks around 60-70Hz before it takes a graceful linear drop through the mid and upper mid-bass with a low point somewhere around 400-500Hz.

I do tend to prefer my bass tuned in that manner with good separation. This is also a major factor for Jolene’s superb control on potentially excessive bass bleed creeping into the mids.

From there, the curve is on a rise through the lower-mids as the dual 4.9mm drivers take over bandwidth duties peaking around 1k. That means lower-pitching instruments and male vocals have an excellent presence and solidity to go with that low-end power.

Beyond, the Jolene is more on the relaxed and smooth side with a slow fade from around 6k to 10k but with an all-important bump around 12k for headroom. You also get a few secondary bumps in the upper mids and lower treble from 3-5k that allow higher-pitching vocals and percussion to resonate clearly.

The timbral emphasis is very much on the smooth and natural side with a smattering of treble energy in the upper mids for percussion accuracy.

From the low-end to the mids it’s all about those dynamic drivers and the beautiful texture they can tease out. This is a timbre that is voluptuous, dense, and physical but also lacking in heavy bloom and annoying smear.

Here I do encourage you to pick a source that really teases out a high-level of resolution to add some character on the broad note texture created by the Jolene on the lows and mids.

It makes a huge difference if, for example, you pair the Jolene with the Luxury & Precision P6 R2R DAP or the Hifiman R2R2000 multi-bit PCM1704K Black edition which do exceedingly well with note micro-detail.

And is not just about fleshing out big moment events from gut-wrenching kick drum strikes but also the way underlying instrumental sustain richness also comes to the fore.

That rising lower-mids curve and the smaller dynamic driver’s performance creates a very natural albeit slightly even-harmonic timbre that adds some emphasis to bass guitar plucks and rhythm guitar chords. Aspects like this will mark out the Jolene as a very satisfying listening experience for those that love their hard rock and 80s classics.

Vocals have some fantastic weight, particularly alternative female breathy vocals with a lot of natural decay. They do not sound as pristine or as speedy as something like the Empire Ears Odin’s BA wall of detail. Instead, they are a bit more planted, full-bodied, and delivering a palpable analog tone to their timbre.

Check out Julia Jacklin’s “Body” lead track from her 2019 Crushing album as a good example of that analog style of presentation and where Jolene draws you into a track.

Jolene’s harmonic balance will always draw you to the fundamental and second order rather than push you upwards. That means you will be hard-pressed not to hear immediately that underlying bass guitar rhythm and those rounded piano notes string strikes supporting Julia’s soft vibrato and sweet-toned vocal performance. It is warm and inviting rather than cold and clinical.

Jolene is all about depth and width with excellent stereo imagery. I think JH Audio has done an excellent job cranking out the sub-bass extension and rumble from Jolene’s dual dynamic drivers without letting it bleed all over the upper-bass and smearing into the mids.

Towards the top-end, it is a little more relaxed and not as sparkling as some of the competition with a drop in presence around 6-9k taking a little air away. For me, that’s the classic JH Audio sound and not a million miles away from the Layla response curve except for a more forward upper-midrange and treble energy.

The bump in the upper mids and lower-treble combined with the more articulate BA for the highs add some welcome clarity to percussion runs but not to the point where it upsets the harmonic balance so it’s still a fairly liquid attack and plenty of body on cymbals and hi-hats.

Vocals around 1-2k have a relatively forward presence as do instruments hitting 500Hz-1k where those two manifold 4.9mm dynamic drivers take over. 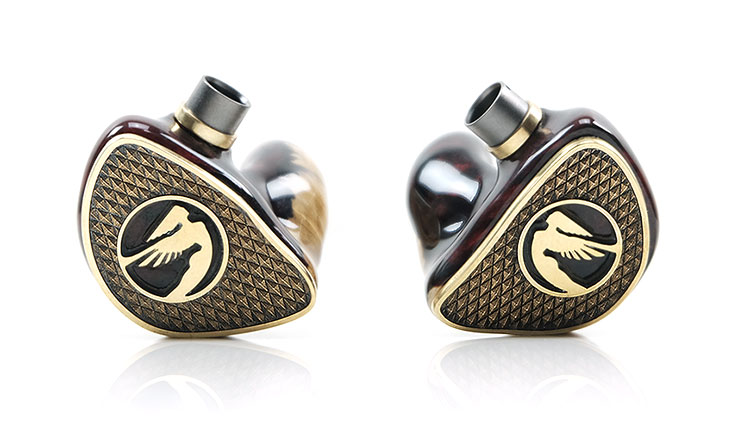 The attenuator module on the stock 7-pin cable seems more transformative than the older cable with a dB attenuation a bit more radical than the original.

It does seem to target the two 9.2mm dynamic drivers a bit more up to the 400Hz crossover compared to the rest of the range so when you drop to zero or go to max the most fundamental changes are going to be felt there.

On the Layla, this was still a fairly juicy setting but the most balanced on the old module so consequently the one I enjoyed the most. It is quite the opposite on the Jolene and it may well be because of how integral the bigger dynamic drivers are to the overall performance.

The sound is a little too flat for my tastes and you will notice a distinct loss in depth becoming very mid-centric in terms of staging. You will also find yourself pushing up the volume a little bit more compared to the max setting considering the bass takes something like a 15dB hit.

Vocals take more of a center stage which is a bonus and the mids dynamic driver does retain a lot of that yummy texture and smoothness so their timbre barely changes. I would pick this setting if I needed something a bit more intimate or vocal orientated and did not need a driving rhythm section behind them.

I would say this is the best balance between flat and all-out bass and similar in weight to the original zero setting on the older Layla stock cable module from 2018.

My personal preference is closer to 3pm than 2pm, something just clicks going up that extra notch for me with sub-bass suddenly becoming a lot more distinguishable and weighted in its delivery.

The overall effect is to add some substantial depth and power to the sound signature without it becoming dominant. The coloration is a little gentler than the max setting and perfect for allowing your typical mixed voice rock vocals and guitar solo riffs to take center stage.

Maxing out the bass is an outrageous setting but also my secret guilty pleasure. I use this adjustment a lot more than I did on the Layla and for good reason.

The control is a lot better this time around and with a curve that doesn’t exaggerate the mid-bass warmth and presence too much. The Jolene seems to be able to keep an admirable lid on the bloom and still create enough space for the mids to breathe.

Nevertheless, it does start to veer towards more of an L-shaped response curve so the power and sub-bass presence is very much to the fore with this setting. Timbral bias will pull you to the bottom order of the notes including vocals and percussion.

This is a weighty signature but a very fun sound designed to be cranked out. Just watch you dip the volume a little compared to the ‘quieter’ zero setting.

The Jolene is rated at 10Ω and 114dB which on paper seems fairly easy to drive and in truth low-gain on most decent DAPs and portable amps will be just fine.

One interesting aspect is how the bass module affects your sensitivity to loudness levels. The Jolene is strongest in terms of dB south of 400Hz where those dual 9.2mm dynamic drivers reside so the more bass you cut out, (effectively dropping to zero on the module), the more power you take out of the Jolene’s FR.

This in turn creates a stronger perception of a loss of volume or dynamic range which teases you to up the volume on any source to compensate. Once you start ramping up the bass module to around 2-3pm onwards the dB amplitude goes up and the volume starts coming down as a result.

Since this sample uses an SE 7-pin stock cable I can only test it unbalanced from our selected DAPs for this review. All DAPs delivered a very black background with the 3.5mm TRS connection. I have a feeling that going 2.5mm TRRS will give pretty strong results on high noise floors also since it is a little less sensitive than the Odin which did quite well in our ‘hiss’ tests.

Out of those, I gravitated primarily to the multi-bit PCM1704k and R2R performances from the R2R2000 and the LP P6, followed by C9. The LP P6 stood out among the crowd because of the way it resolved the texture from the Jolene’s dynamic drivers which was simply superb.

The P6 has this wonderful ability to flesh out the rich texture in notes with a tremendous amount of detail and still offers a very natural almost analog-type performance with world-class instrumental separation.

The Jolene takes to that like a duck takes to water with its low-end and midrange dynamic driver sounding wonderfully detailed, vivid, and natural in their performances.

The R2R2000 goes about its business with Jolene in a slightly different manner with a more neutral cleaner sounding signature but what I love most about this pairing is the dynamic range and sheer size of the staging capability this pairing can deliver.

The treble is clean and extended and the bass is deep and powerful at the same time with a very spacious and open sound. Because Jolene is relatively relaxed on the top-end it does not sound too pushed or harsh either, with the R2R2000 acting almost like a brighter counterweight for harmonic balance.

The Cayin C9 comes in with its dynamic prowess, particularly on the low-end when using the tube timbre and its Class AB setting. I do advise pairing with a decent source such as the Lotoo PAW Gold Touch to ensure you get a decent level of resolution into the C9.

I felt the Jolene scaled quite well with the power of the C9 with wide stereo imaging on a very black background and plenty of space for those dynamic drivers to flex their muscles without the performance ever feeling congested.

DAPs with a neutral sound signature and excellent separation and clarity fared better for me than warmer DAPs when paired with the Jolene.

The DX220 MAX was the best of the rest so to speak with a very balanced linear sound signature and an engaging yet spacious sounding midrange performance.

The FiiO M15 also offered a cleaner tone but tended to just drop back a bit too much for me in the mids which is something I like to tease out as much as I can with the Jolene. The HiBy R8 was actually quite open sounding with some excellent and a very sweet-sounding vocal timbre, particularly for high-pitched female vocals.

Click on page 3 below for Select Comparisons & Overall Verdict