Unlike their big brother the Utopia, the Focal Stelias use a 3.5mm connection and I was able to use my existing wires with no issues. I was able to use a couple of custom wires and even some from other manufacturers.

Once again I must mention the amount of efficiency this headphone is capable of. I used a couple of Microdacs with great results but of course, there is plenty of upward scalability when you feed them more power and impactfulness does increases with increased power.

I mostly used them with iFi’s NEO feeding a Topping A90 in balanced mode using the XLR output hookup of the NEO. They sounded best however with Focal’s own Arche Amplifier DAC with the Arche profile set to the Stellia in normal mode, not in hybrid and using the XLR balanced connection.

It was to me, the smoothest sounding combination using the Stellia. The Arche is a fantastic piece of equipment and will be reviewed soon so stay tuned. 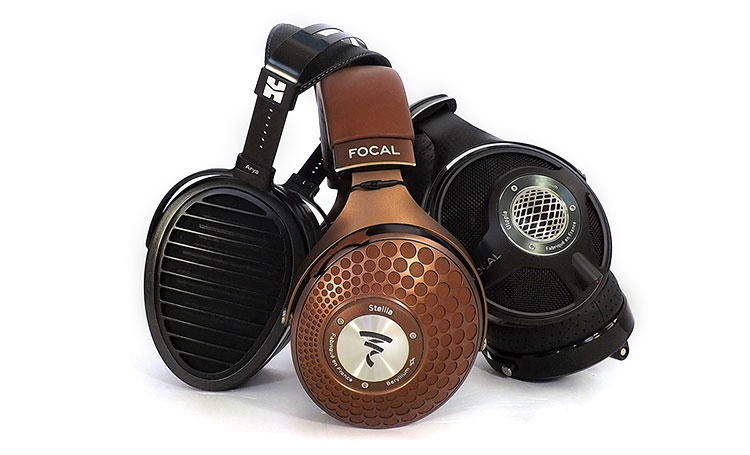 To me, there is no substitute when it comes to natural timber, staging, and pitch for the Focal Utopia. Gorgeously constructed in a manner that once you hold them In your hands, you know they’re gonna be awesome. They are. With the right recording, they can be magical.

My only peeve with them is the fact that the Focal Utopia uses Lemo connectors which are hard to find. One thing is for certain, they are an excellent connector but you might have to go exclusive Focal accessories with this one if you want more than one wire.

Fortunately, Focal offers an optional package deal and bundles a couple of wires with the Utopia similar to Stellia’s package and I suggest future buyers should go that route. Plus there are lots of other package deals Focal offers nowadays including deep discounts for headphone / Arche combos.

Now that we got the only con out of the way the rest is all good news starting with the black and silver theme which is timeless. The Utopia feels somewhat heftier than the Stellia that is mostly made of aluminum while the Utopia is made of what seems to be high-quality resin cups with a vented centerpiece in aluminum, and yokes made of carbon fiber.

The Utopia has a leather-wrapped headband just like the Stellia. The earpads are also leather but use perforated leather. Although the Utopia feels substantial in weight they have a comfort level that allows me to use them for hours.

The Stellia has more clamping force versus the Utopias by about 10% but since the Stellia are slightly lighter they seem to balance off and offer similar comfort since the earpads and headband padding are very similar. 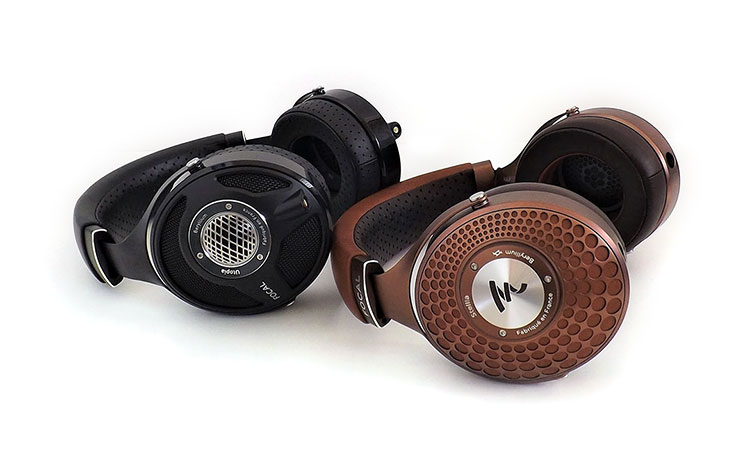 I could probably describe the differences with one long sentence. The Utopia is wider, with a larger stage with elements that occupy more space, with a 10% increase in clarity and timber accuracy in the treble and midrange sections but with a 2-decibel reduction in the bass.

Starting with the bass, there is better definition and speed with the Utopia but less of it by a decibel or two and I tend to raise the bass by a few decibels on them contrary to the Stellia which I just leave stock most times. But once equalized to my taste I like the bass response more so on the Utopia because it just sounds cleaner with better definition.

If there is such a thing as a window to music, the Stellia puts the user in front of a clear and clean glass while the Utopia sounds as if there is no glass with a clear open picture of the recording.

There is a softer character inherent in the Stellia that is not in the Utopia Mostly in midrange response and high frequencies.

Midrange response on the Utopia seems to have a sharper definition and the Stellia tend to soften things up.  The Utopia also sounds a bit more forward compared to the Stellia and they project a wider panorama in general.

There is also a better definition in the upper regions of the frequency spectrum and there is a slight increase in clarity probably due to the high frequencies being more forward with a sharper edge. 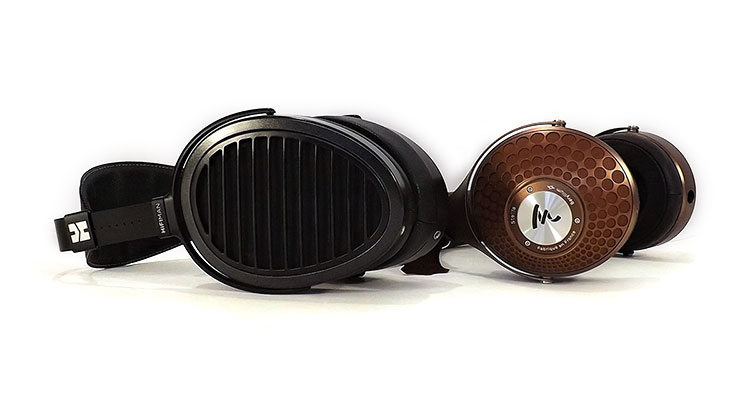 My beloved Hifiman Aryas are loved by me for many reasons. One reason is the large panorama of sound it’s capable of which seems to surround the listener with their 3d imaging capabilities. I decided to do this comparison for a couple of reasons.

The first reason is that this set is owned by me and these are very familiar to me because I use them weekly, another reason is that I know lots of people will steer this way due to budget restrictions since most everyone in the audio scene speaks highly of the Aryas.

Of course, there is lots of contrast in build, technology involved, and in sound signature.

The headband design is the most obvious and visually one could not be mistaken for the other. The Hifiman Arya headband is made of spring steel which has been naturally darkened. The yokes are made of metal with metal slide adjustments that use a comfort strap. If you are a handy person these parts can be replaced easily. I like that.

The earcups are the famous teardrop shape that only Hifiman makes with very large planar diaphragms that use a single-sided magnet array. The comfort level of the large oval-shaped pads of the Aryas are unbeatable in comfort in my opinion.

Connectivity is the common 3.5mm plug and both the Stellia and Arya wires are compatible with each other. Although they use the same connectivity the Arya has a rather high amplification requirement and needs high amounts of it to sound optimal.

One other small con on the Arya is that you only get one wire with a non-removable 6.35mm plug and connectivity for that reason is limited until you get another wire.

My first observation was the fact that although the Arya has a larger driver radiating surface, the bass had almost the same presence and energy. Most of the differences were in the high-frequency range with better clarity and definition. Bass was somewhat thicker on the Arya but the Stellia had more impactfulness.

The midrange section was similarly smooth and accurate in tone. There seems to be more coloration in the Arya but it only adds some character. The more neutral and analytical aspects were done best by the Stellia but the Arya seems more musical and more forgiving of source.

If you use the previous comparison of the sound window I could generally describe these 3 headphones in this manner to conclude. The Utopia has no glass and you see the panorama with just your eyes. The Stellia is through a clean and clear glass and the Arya would be looking through a double pane glass but with the absence of smear or glare of course.

The Arya is not as recording quality dependant as the Stellia and could make some poor recordings sound acceptable. However, the biggest difference is in the amount of power needed to get the Arya to an acceptable level of performance.

I would dare not run the Arya with a micro DAC but the Stellia seems to be powered just fine with for example the Ibasso DC04, the Zorloo Ztella, and a Helm Audio Bolt to name a few. I own around 5 micro DACs and they all paired perfectly with the Stellia so I would say the Focal Stellia’s versatility is excellent. 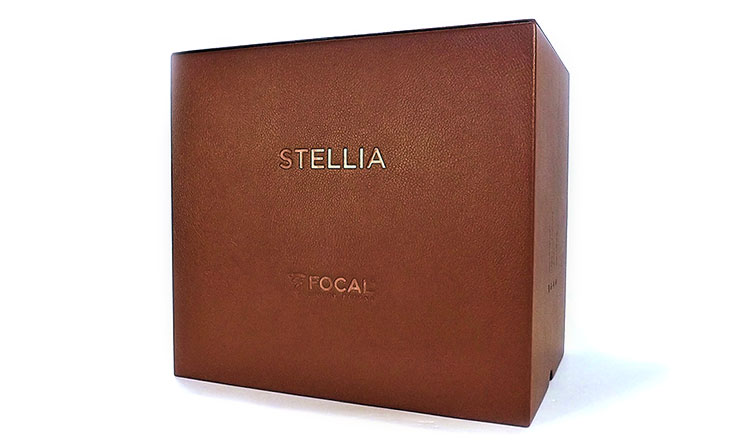 What we have here is probably the best or one of the best closed-back headphones money could buy. There are perhaps one or two that could perhaps compete with the Focal Stellia but be ready to dig even deeper into your bank account. The Focal Stellia has a stellar look and does so many things audibly well with such good sound quality that it is gonna be hard to beat them.

Of the three I compared which is my favorite? The Utopias of course but they are the most costly and if they are within your budget get them. The second spot would go to the Stellia because of where they sit price-wise, performance-wise and they are right where they belong. Performance justifies the prices on all three.

The Focal Stellia is in one word stellar. A closed back that does so many things right is hard to come by and I would say almost impossible but Focal pulled it off. For my last few words in this review, I would like to say and direct the words to the entire Focal staff, ‘félicitations pour la fabrication d’un super casque’. Well done.