Disclaimer: The Empire Ears Hero was sent to us in exchange for our honest opinion in this review. Many thanks to Empire Ears for giving us this opportunity. 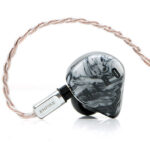 Empire Ears Hero
The Empire Ears Hero is a bit of a welcome tonic to the miserable year that is 2020. This is an honest to goodness V-shaped tub-thumping presentation, heavy on the sub-bass rumble and matching treble energy.
Slide here to add your score on the gear!48 Votes
8.6
8.6
Reader's Score
$1349
Empire Ears

The Odin might have been the hot topic in quarter 3 2020 when it was launched but alongside it, Empire Ears also debuted their new Hero universal monitor which comes in a good deal cheaper at $1349.

The Hero is being billed as a hybrid universal incorporating a lot of their latest technology outside of EST drivers and representing something of a cross between their legendary bass monster, the Legend X, and the ethereal clean Zeus XIV. That is quite some hallowed company right there to be going toe to toe with.

For product placement purposes, the Hero is part of Empire Ear’s X series which is the spiritual home of the Legend X as well as the previously reviewed Valkyrie and Nemesis.

Anything with a fat Weapon X subwoofer inside can be found in the X Series lineup. And yes, that means the Hero is likely to tickle the fancy of some bassheads because it also comes supplied with some low-end bombs.

Like the Odin, Empire Ears have stuffed a lot of tech inside the Hero except this time no electrostatic drivers. That means the complexity of the driver configuration is a little simpler.

On the low-end EE has inserted a single improved W9+ 9mm dynamic subwoofer design over the original Weapon IX driver used in the likes of their Legend X and Valkyrie monitors. This covers the entire bass response curve rather than just the sub-bass FR.

Layering up you have 3 proprietary balanced armature drivers with one for the mids, 1 for the mid-highs, and 1 for the highs. Threading duties as ever are done with Empire Ears proprietary synX Crossover Network and this time it is a 4-way version.

The Weapon IX+ inside the Hero is a proprietary rare-earth magnet infused dynamic driver. The original Weapon IX driver has been used before in multiple configurations in their Nemesis, Valkyrie, and the Legend X. Technically, the 9 or the IX referred to is the actual size of the driver as in 9mm.

The defining characteristic in the design of the original Weapon IX driver is how the woofer is enclosed in a tuned bass-reflex system. It has a front-firing port and rear-firing vent to reduce distortion and enhance frequency extension. This is different from traditional DD designs that rely more on internal shell enclosures for volume and can often end up being fairly inefficient.

This time around Empire Ears has designed a Weapon IX driver with a larger internal coil diameter and an improved suspension design to reduce potential peak-to-peak distortion. Believe me, the bass response on this new driver is incredibly tight and clean and is one of the defining features of the Hero.

The Hero uses Empire Ear’s A.R.C tech which I first encountered when reviewing the Phantom in 2018 and since embraced it also with the Odin. This is a technology also applied inside the Wraith so it is not some fleeting dalliance from EE.

A.R.C is short for Anti-Resonance Compound and is a special type of damping coating used on the inside of Hero’s shell. It is applied to virtually every component used such as the drivers, tubes, and crossover boards.

Empire Ears claims that this coating adds a critical level of mass or solidity to the internal components. This, combined with ferrofluid damping inside the drivers, creates a high level of clarity, better efficiency, and importantly, deeper bass with the Hero. 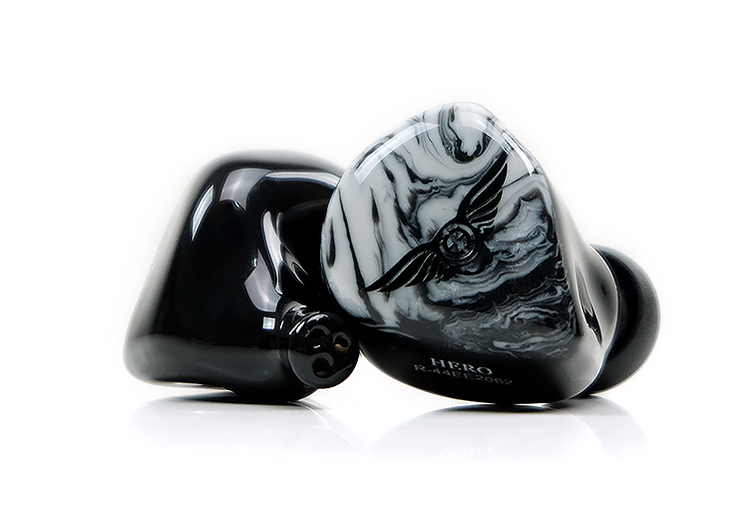 The Hero follows a similar form factor and design approach as the Odin and the Wraith with a polished opaque onyx acrylic hollow-body shell underneath a unique faceplate design. As with the two aforementioned monitors, the Hero shell follows those gently contoured outlines to allow it to maximize its fitting.

The faceplate this time around is officially called Black Tide, which seems fitting, and exclusive to the Hero. The design seems to be loosely based on a marble pattern in noir black and white styling with the EE logo and moniker Hero on each faceplate just below the veneer.

I am quite sure the faceplate waves are random enough for each Hero faceplate to be entirely unique from each other much like the Dragonhide on the Odin.

As with all EE IEMs, the use dynamic drivers the Hero comes with a venting system which is a small triple hole layout at the rear near the top of the main shell just behind the 2-pin connectors. It is incredibly discreet and not something you can easily see in day to day use. 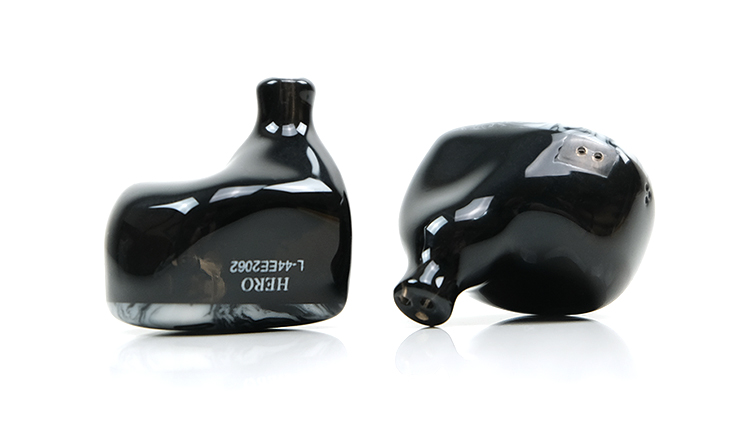 The Hero has a relatively compact form factor in terms of width and given its acrylic material for the design it is also quite light.  The nozzle is actually deceptively long making it a relatively tall monitor but it also means it can get a pretty decent amount of depth into your ear canal depending on the tip you use.

The resulting combination of that smoothly contoured lightweight acrylic shell and decent nozzle length is a very comfortable and secure fit for the Hero.

Surprisingly, despite the Weapon IX+ venting system on the rear of the shell, the passive isolation capability of the Hero was well above average. This is almost BA level of isolation which I would have to put down to the contouring, nozzle, and tips.

The Final E tips are an excellent choice because of the way they really tease out a much more explosive sound than many regular silicone tips but at the same time give you a seal on par with foams.

The only thing I have to say though is if you are new to these tips you might push them all the way in which can close off their narrow bores and kill the Hero performance. There is a little driver flex from the Weapon IX+ when you get your initial seal on the Hero but that is fairly normal for this driver. Once sealed, it will not happen again.

You can and should tip roll just to help you get an idea of how much the stock sound is for you. I find the Final E tips to be extremely vivid and leaner in the mids and the Hero’s high-energy tuning is going to go up a notch with the Final E.

Like the Odin review, I would recommend having a listen to SpinFits on the Hero as they tend to offer a little more balance and a fleshier midrange if that is your preference. Acoustune’s AET07 tips, which I discovered during the MMR Gae Bolg review is another interesting alternative with slightly less treble fizz and a shade less sub-bass power paired to the Hero. 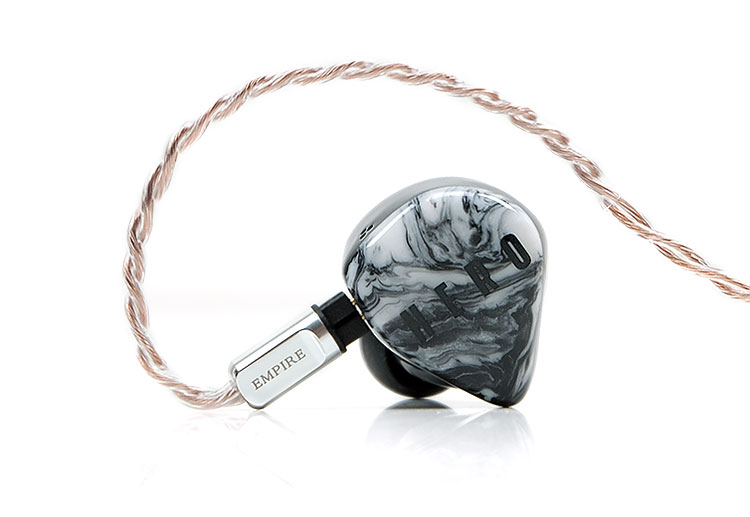 The Hero stock cable is a mix of the excellent Effect Audio Ares II and some new thinking on the side of Empire Ears. The resulting combination is a 1.2m 4-core cable now called Alpha IV and a great cable out of the box with a pliant, low microphonic build quality and an attractive and very supple translucent PVC jacket.

These connectors a little bit longer than EA connector barrels and have a little bit of indentation on the sides for better grip also. You can also order the Alpha IV in a 3.5mm TRS or 2.5mm TRRS version. The one we have here is the 2.5mm TRRS or balanced version.

Whilst EE is not as yet selling the Alpha IV separately the slightly different Premium Series Ares II from EA is being sold for $149.90 and for me, it is worth every penny. You will get a smooth coppery influence with a cable that is not going to unbalance the Hero’s high-end performance or thin out the excellent body on the low-end.

It is a massive step up in terms of dynamic range compared to thinner 4-core OFC P1 variants that some high-end IEMs still come packaged with. 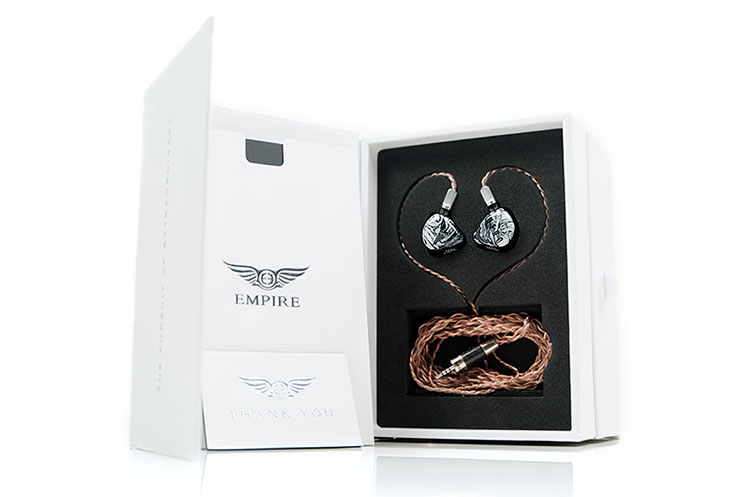 The Hero is the Odin in white to sum it up for packaging and accessories. That is a good deal considering the price of the Odin. It does mean that Empire Ears have not settled on a mature packaging concept and it serves them well aesthetically speaking.

Everyone loves a bit of white these days and the compact two-layer clean white box does match the slightly off-white Black Tide faceplate of the Hero a bit better than if it had been in a black box.

Slide off the white sleeve and you get a tidy 2-piece tiered modernistic all-white slider box similar to the Odin and the Wraith. The cable plus the drivers are neatly housed on the top-tier in their own display foam and the accessories are all housed in the slide-out tray just below.

Inside the slider tray, you get Empire Ears’ standard durable round screw aluminum case that is printed with the EE branded wings and a text engraving of Hero. You also get a small cleaning tool under the tips tray and a black satin cleaning cloth inside the aluminum case also branded with “empire” in white. 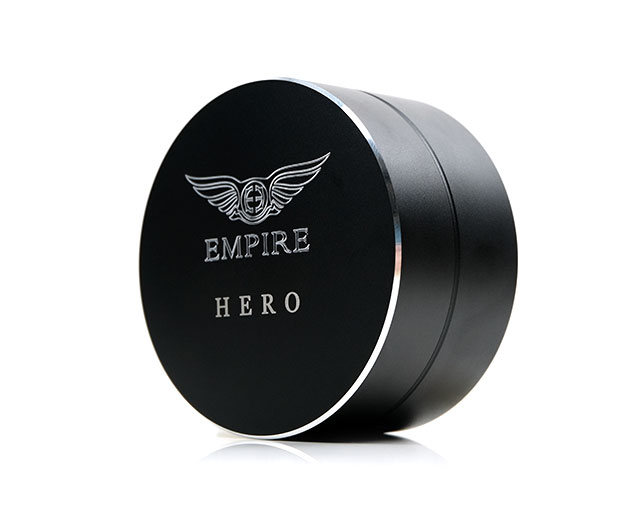 The threaded aluminum case has slightly less space to work with than the older weather-sealed Aegis cases EE did with the Phantom but they are bloody solid, and I mean practically bombproof.

Apparently, it is also weatherproof and it does look fairly tight when the lid is screwed shut. It is a shade on the heavy side though so I am not 100% sure I would be using it on tight Kg limits for travel.

The Final E tips come in their own little silver tray which I much prefer over cheaper cardboard variants that a lot of mid-fi IEMs seem burdened with. Aside from that you also get some stickers, a product brochure, and a white thank you card.