The DUNU DK-3001 Pro is a complete revision of the original DK-3001 and benefits from the technology first introduced on the flagship DK-4001. It is priced at $469.

Disclaimer: The DUNU DK-3001 Pro sent to us is a sample in exchange for our honest opinion. We thank the team at DUNU for giving us this opportunity.

To read more about DUNU products we reviewed on Headfonics, click here.

Buses, they come in pairs or not at all, such is the life of a commuter. The meme is not lost on DUNU either with the long development gestation period and the recent launch of the DK-4001 followed by a rapid follow-up with the new DK-3001 Pro.

Now we have reviewed the original DUNU DK-3001 some years ago via Smit but sadly I personally have not heard the original version so I am a bit fresh to the whole DK-3001 concept.

However, from what I can tell the new Pro version shares a similar vision to the DK-4001 flagship albeit at a cheaper price and thus targeting the likes of the FiiO FH7 and Campfire Audio’s Polaris 2 potential customers in a more direct manner.

From a distance, you might be forgiven in thinking what exactly the difference is since both the DK4001 and DK-3001 Pro are 5 driver hybrids using Knowles BA and a 13mm dynamic driver with a beryllium coating on both sides of the diaphragm. They also look very similar and both offer that fantastic patented quick-switching jack connector system for the supplied cable.

Well, the devil seems to be in the detail so some things have been sacrificed to get down to that competing mid-fi price point on the DK-3001 Pro. Gone is the sandblasted matte-black zirconium liquid alloy and in some a more traditional machined stainless steel housing for the DK-3001 Pro. I also believe that the A.C.I.S. hood is not available inside the DK-3001 Pro plating.

Externally the more expensive 4-wire Furukawa sourced OCC Copper and DHC pure silver Noble cable has been changed to a 4-wire double refined high purity OCC cable of similar length, 1.2m. This one seems a little lighter and most likely cheaper than the $389.99 Noble to fit into the $469 price point.

At the time of writing for this initial feature, I know that the original dual Knowles SWFK-31736 balanced armatures have been changed on the DK-3001 Pro. However, the headcount is the same, 2 x dual driver with 2 targeting the mids and highs and the final 2 acting as a super tweeter for the ultra-highs. The 13mm dynamic driver covers everything below so this is a 3-way crossover this time. 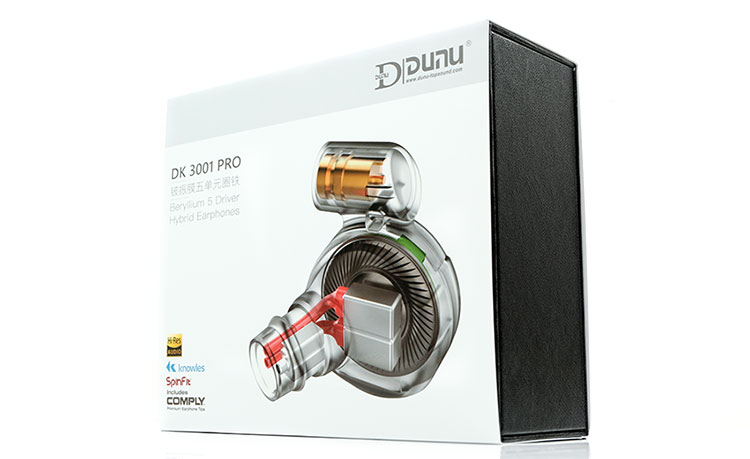 The DK-3001 Pro packaging is every bit as impressive as the DK-4001. This time, it comes in a black box with a white-colored vinyl sleeve using DUNU branding to the fore and the name of the product in multiple languages as well as a diagrammatic on the front. It looks pretty professional on the outside with a similar route taken on the very impressive internal layout.

The box comes absolutely loaded with accessories with a top-quality presentation split into two layers so you pretty much see everything you are getting right away. 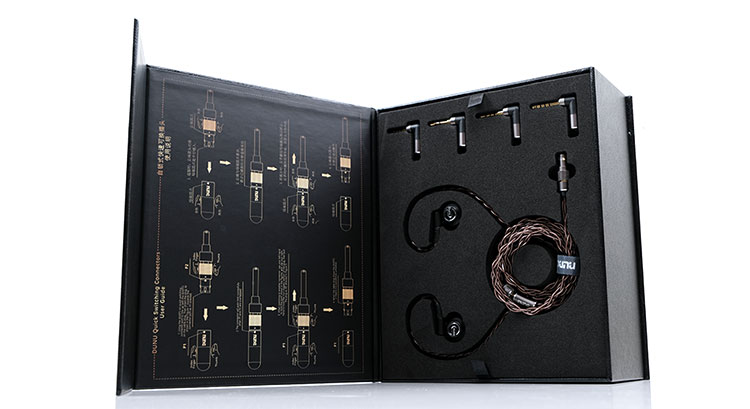 The top-level of the internal shelf holds the cable, the DK-3001 Pro drivers and the same 4 interconnection plugs that lock onto the cable as you get on the DK-4001. The included terminations are 2.5mm, 3.5mm (balanced and unbalanced) and 4.4mm gold-plated TRS and TRRS jacks. 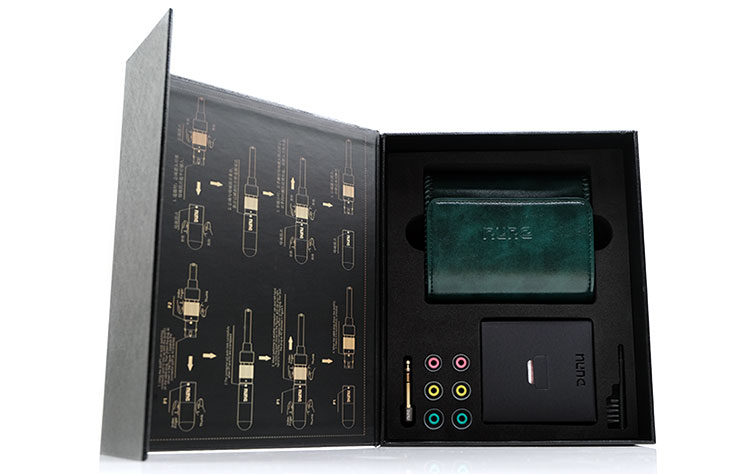 The second layer of the box contains a darker green leather carry case and the remaining accessories. This includes SpinFit tip again, a cardboard tips box for rest of the tips lineup, a cleaning brush, quarter jack, and an airline converter. I think that makes about 5 different connections for one cable alone, pretty handy stuff. 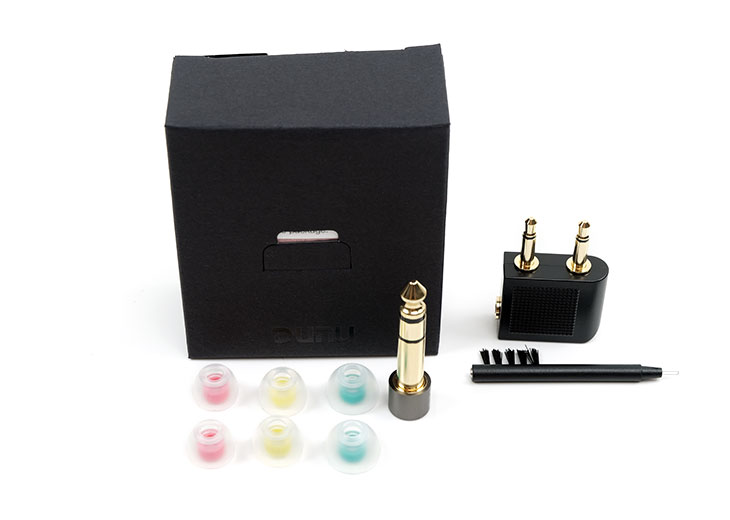 The full lineup of accessories is as long as your arm and are as follows:

You honestly can’t ask for more than that at this price point. A very comprehensive line-up of tips and an excellent cable connection system. 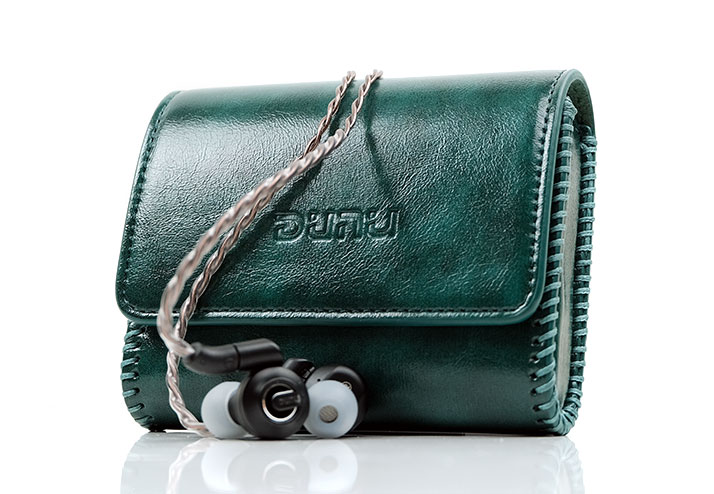 I do have to pass a little critique on the leather case which operates in much the same manner as the DK-4001 case. I love its looks and I am really glad there is a small elasticated pouch to the rear to hold some accessories which were not in the original DK-4001 case design.

However, it might be a tad small in terms of packing absolutely every accessory and tip that comes with the DK-3001 so you will have to choose wisely on what you put in there before you go out for the day. Personally, I have been initially throwing in the cleaning brush, adapters and a set of SpinFits and foams for use but that may change as time goes on and I get more used to the signatures from each set of tips. 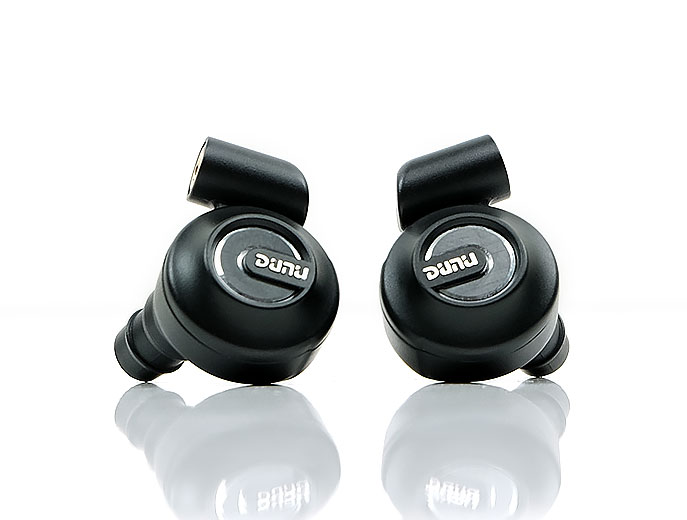 The form factor of the DK-3001 Pro is virtually the same quasi-traditional universal monitor form factor as the DK-4001. It is still an elegant 3-part design with an MMCX stem to the rear. However, there have been some minor design changes and some bigger changes in the materials used.

As mentioned, this is now a CNC machined stainless steel body rather than the thinner but stronger liquid zirconium alloy. The stainless steel thus is a little thicker on the inside to achieve the required durability. You can feel the slight weight difference between the two monitors with the DK-3001 feeling a little heavier.

The outside faceplate is also a little different. Gone is that DK-4001 venting motif and bulge on the side and in comes a more symmetrical rounded faceplate on the DK-3001 Pro. The DUNU branding on the DK-3001 Pro is on a slightly raised front plate rather than etched right into the front. 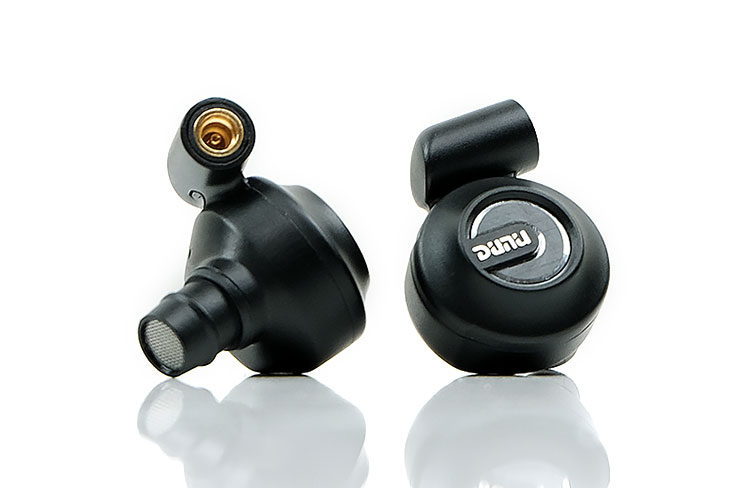 The DK-3001 uses the same detachable patented catch-hold MMCX connector system as the DK-4001. The shaping of the connector stem is also much the same with an angular guide for the cable to go over and behind your ears quite neatly.

The stock cable is not the more expensive Noble 1.2m cable from the DK-4001 and logically so given the reduced price point. This is a 1.2m 4-core double refined high purity single crystal OCC copper wire in a translucent braided PET jacket. It is quite a bit lighter than the Noble alternative with a different, albeit looser, braiding but still the same dark copper visual tone.

I must also commend DUNU for this choice of cable based on its physical properties. The lightness combined with absolutely no microphonics below the splitter makes for a very smooth level of handling. It does not seem to hold a kink or twist either so it seems fairly memory retentive out of the box. 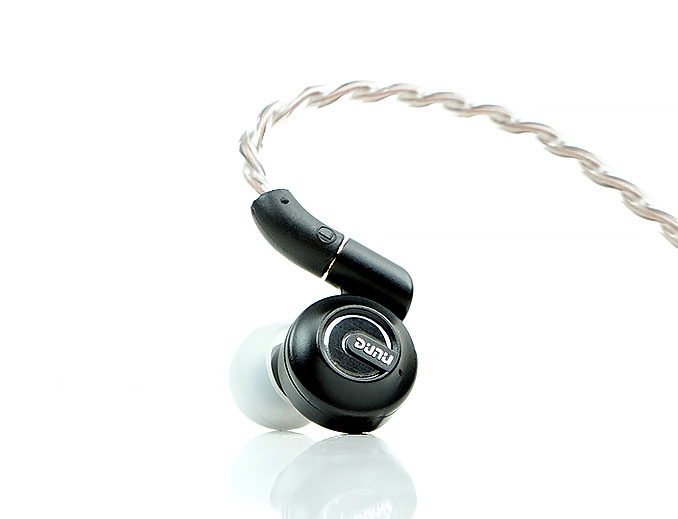 In terms of comfort, there are no real issues with the DK-3001 Pro. The fitting feels almost the exact same as the DK-4001. The level of isolation is good but not amazing due to the bass vent port required for that 13mm driver to sound optimal.

The DK-3001 Pros are quite light and small so you won’t feel any awkward pressure pains on your outer ear ridges and they do sit flush to the ear also. However, the level of isolation and secure fit is a lot more tip dependent and I did get variable results with the supplied tips as I expected. 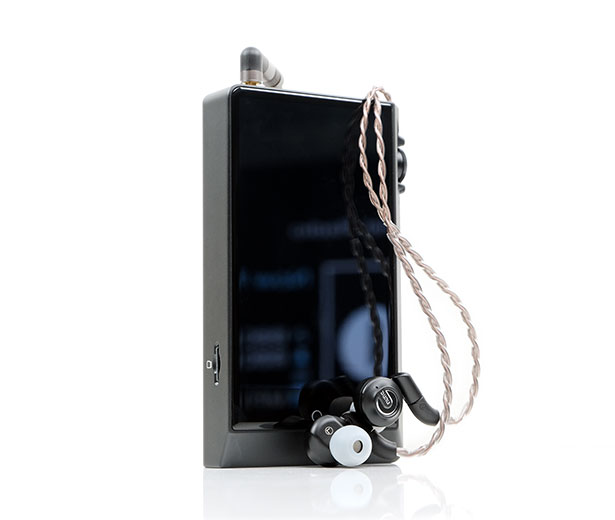 If you happen to A/B the Dk-4001 and DK-3001 Pro together you will notice that change in BA timbre between the two dual-BA variants inside each monitor. There is much less change in the dynamic driver tuning with the DK-3001 Pro similarly well-extended but also very nicely balanced with a fairly linear curve from 30-80Hz and a gentle drop to 800hz. I do like this driver a lot I must say.

What I am hearing the mids upwards is a bit more of a neutral timbre and not quite as much warmth and richness in the DK-3001 Pro’s instrumental notes. Not to say that they are ‘lean per se’ but leaner and not quite as “juicy” sounding as the DK-4001 mids tonality. I would suspect those new BA’s tuning and frequency range are largely responsible for the more neutral tone.

There are more upper mids and treble energy and an enhanced odd-harmonic overtone on the DK3001 Pro so you get more of an ethereal clean sound with good energy but not quite the wetness and body of the DK-4001 treble.

I suspect again a trade-off here with tuning more for articulation and separation and what seems to be a touch more vocal emphasis but I need to determine that to be true in the main review. My initial impressions of the treble tuning are better than the FiiO’s FH7’s which comes across as a little harder-edged with a little more sibilance creeping in compared to the DK-3001 Pro.

There is a marginal difference in their impedance at 20Ω versus 32Ω which seems to result in a slight dynamic range difference when setting at similar volumes on the N6ii and PAW Touch. Neither display any concerning hiss with the DK-3001 Pro which is always nice to hear right out of the box.

I am also finding myself in a happy spot right now with the Cayin N6ii/A01/Comply tips pairing as opposed to the more neutral reference Lotoo PAW gold Touch. The N6ii/A01 motherboard seems to add a little additional thickness along with the Comply tips and vocals have a nice shine but without any edginess, particularly higher-pitched female vocals.

Right now, the DK-3001 Pro’s price point places this right in the mix with FiiO’s FH7 and iBasso’s IT04 to name but a few. The tuning seems to be initially quite competitive also with good detail, a light to neutral timbre and yet still an excellent dynamic driver bass response that I am used to from the DK-4001.

Do not forget about that jack connector exchange system. At this price point its a key differentiator in some ways and something I find incredibly useful. These are going to be some interesting comparisons for the main review. The hybrid universal dynamic warn sub $500 is really hot right now but thankfully the differences and which one might appeal to you are easy enough to pick out so stay tuned!