I am somewhat surprised but in a good way that AAW and Custom Art have included the excellent Tiburon MKII UP-OCC Cryo Copper cable with the Project 4+2 package. On its own, this cable retails for $169 so not a cheap cable by any means.

This is the second gen of the original Tiburon that came with the POLA39, which was the last collaborative project from AAW. The original was a 26AWG UP-OCC Copper Cable Litz 4-wire build whereas the MKII is now using a Litz 5 geometry with a larger 24AWG cryogenic treated UPOCC monocrystalline copper conductor.

A bigger gauge means lower impedance, a better signal delivery which to you and me should mean better a better level of dynamic range from Project 4+2.

The PVC jacket and soft memory coating remains with some tidy braiding. That means the handling is much the same as before with low microphonics and no memory retention. The splitter and jack have changed also and are more in line with the styling and lighter weight from the Halcyon cable but with a darker carbon fiber print.

Inside the barrels, the cables are joined with a 10% silver solder finish and the jack has a 24k gold-plated pin contact area. The connectors are 2-pin composed of a 99.9% gold hard plating over brass and insulated in clear thermoplastics. 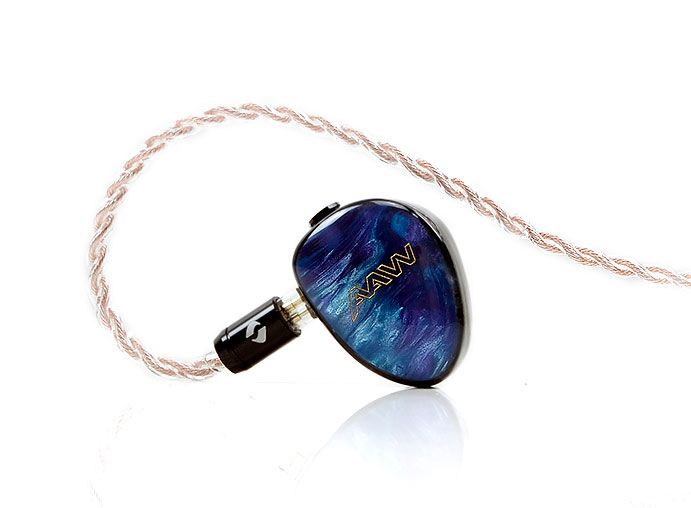 Of course, with a set of filters, Project 4+2 has not just one but 3 distinct tuning profiles. The Vokal filter is the most dramatic in terms of tuning changes, whereas the other two, Bass and Norm, are closer bedfellows with the major difference more focused on the level of bass quantity.

I also have to give a shout-out to the supplied tips as they also affect the final output to a varying degree. The silicone tips will produce a cleaner tone, with an airier top-end and a slightly lighter note weight with less bass quantity. The foam tips will produce a richer tone with additional bass weight and an instrumental note with more body.

Despite all these variations, Project 4+2 does have a core tuning profile and it is an excellent one given the competitive price tag the two companies have slapped on it.

At a high level, this is a beautifully balanced hybrid sound with a controlled but nicely defined sub-bass presence and good mid-bass warmth that travels just enough into the lower mids to give instruments a nice bit of presence and girth.

Vocals are clear and forward with a slightly sweet overtone and suffer from little if any harmonic dissonance from a balanced treble tuning that has a slight upper as opposed to lower-treble bias.

The primary FR has a sustained elevation from 20Hz to 100Hz but not overcooked so you get a palatable dynamic driver slam right at the low-end when called upon but it does not overshadow the mids. The control here is excellent.

There is a slow decline from 100Hz to around 700-800Hz then rises again to around 2k. This doesn’t have a scooped out lower-mids profile meaning instruments are not that recessed sounding or too far behind vocals. Nor do they sound thin or brittle with some mid-bass warmth giving them a sweeter more natural-sounding tone.

There is a 2-4k dip but I never got a sense that vocals or percussion presence suffered from a lack of air as a result. The treble tuning is more upper than lower with a milder 5-6k bump compared to around 7-8 but neither are wildly amplified to sound peaky or bright.

In relation to the filter tweaks, the Bass filter is more focused on the isobaric driver and elevated the response by around 4-5dB from 20-100Hz whereas the Vokal filter attenuates aggressively in the same region. The resulting response of the Vokal is much more mids and treble centered and flatter whereas the Bass filter will produce more of an L-shaped low-end response. 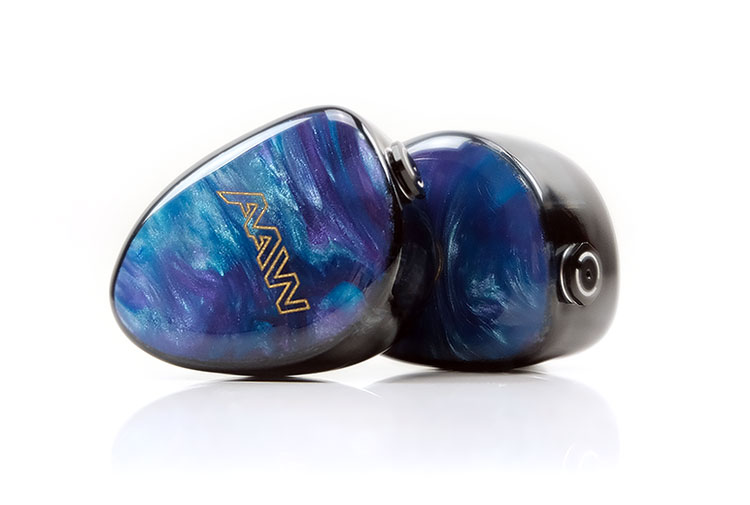 I love the timbre on this monitor. Project 4+2 is a pleasing mix of sweet and neutral in terms of quantity and tone. Credit to both companies for tuning a monitor that I think a lot of people, except for the most extreme bassheads, will enjoy.

The low-end with the Norm filter has some excellent extension and a typically dynamic driver level of natural decay. It’s not an overpowering presence, rather, physicality is exchanged for more precision and definition.

The bass filter will increase the quantity but it is not excessive, possibly around 4-5dB max south of 100Hz leaving the rest of the range largely untouched and free of muddy bloom. The Vokal filter will strip a lot of weight out producing a much flatter bass response. Vocal timbre with the Vokal will sound more ethereal and slightly lighter as a result.

You will have no problems in terms of picking up on an accurate rather than heavily colored bass fundamental for instrumental timbre with the Norm and bass filters. Project 4+2 does a nice job of injecting a little bit of warmth in the timbre also with that slow drop into the lower mids and an earlier than normal rise to 1k.

The vocal timbre is perfectly balanced for my tastes with the Norm filter. For me, that means a slightly sweet overtone becoming a bit more rounded and robust with the bass filter. AAW and Custom Art have tuned the vocals slightly forward so that sweetness is combined with some nice presence but stops well short of being shouty.

The Vokal timbre is perhaps less too light for me personally as the balance shifts more to the mids and treble so the tone is lighter and quite airy. You lose a little vocal weight despite them being more in focus.

With the Norm and Bass filter, percussion timbre is similar to the vocal with just enough uplift from the upper treble peak to give them a nice light crispness and a shortish decay from those BA drivers. Again, there is no artificial sibilance or harmonic dissonance creeping in so the overall tone is pleasingly clean but not brash or edgy.

The staging dimensions and presence points of Project 4+2 will largely depend on the filter you use. I tended to stick with the Norm filter purely because the source I was pairing with, the HiBy R8 didn’t need any additional bass boost when using the foam tips.

The Vokal filter will produce the flattest response with the least depth and more of a mids and treble bias. Vocals and percussion will come more to the fore with lower-pitching instruments still clear sounding but not resonating as much as with the other filters due to the more mooted fundamental.

With the Bass filter, you get a stronger sense of depth and power with a heightened 20-100Hz presence. You will find your ear drawn more to the Project 4+2 PRaT with this filter with a stronger perception of bass guitar plucks, kick drum thumps, and fat bass synth notes.

The Norm filter is the most balanced of the three for staging with a good low-level extension but also with a more moderate level of bass forwardness and physicality than the Bass filter. Vocals are still clean and clear with this filter with excellent headroom.

Staging width is excellent with all three filters with an impressive level of instrumental separation and headroom, particularly with the silicone stock tips which offered a bit more air than the foam tips.

Project 4+2 is rated at 8Ω and 105dB SPL and it is not the hardest to drive so a decent DAP SE output in low-gain will be just fine to power it. The 105dB SPL will mean you do need a little more current or volume to get it to workable listening conditions so I would not classify this as a super-sensitive monitor.

Using 4 test DAPs, the FiiO M15, HiBy’s R8, LP P6, and iBasso’s DX300 in SE output low-gain, no noise or background hiss was detected which I sort of expected with that SPL rating. Using a dingle such as the Lotoo PAW S1 from its SE, again no noise, but it will push you a bit more for volume sitting around 75 steps out of its 100 step max in high gain.

Now, this particular sample came with a 3.5mm SE terminated Tiburon MKII cable but you can pick a balanced termination when buying Project 4+2.

Luckily, I do have an MKI Tiburon from a previous review with a 2.5mm TRRS I did use for testing on noise, and thankfully no hiss with those tested DAPs. It also allowed me to drop the 4.4mm PAW S1 high gain volume output by a good 10 clicks over the SE 3.5mm performance.

I want to just broaden out the definition of a pairing for this particular section to also include the tips and the filters. The reason being is the level of sensitivity Project 4+2 has to those two elements as well as how they interact with our test sources. It makes for a very flexible monitor with a high synergy potential over a wide range of sources once you account for all 3 elements.

For example, using the stock silicone tips with the DX300 and the norm filter you get a very expansive staging quality but also a fairly languid and polite delivery that errs to the warm side a little. For those that like that SET neutral positioning and do not want to press on the gas for bass, this may well suit.

However, for those that like a bit more bit then I suggest moving to the bass filter to strengthen the bass quantity and physicality. Even more so, changing the tips from silicone to foam. However, for the most impactful response, change to Final E tips. It brings in the staging just a little, sounding more intimate but it sounds a lot more vivid with a stronger bass response.

For the HiBy R8, I was quite happy with the Norm filter and the stock foam tips. The R8 has a bit of shine in its treble that the foams soften just to the right level without impacting Project 4+2’s headroom.

The R8 itself also has more body on the low-end by default so Project 4+2’s isobaric driver responded very nicely to that giving some essential PRaT. Its warmish tone in the mids gels very well also with the clear vocal tones of Project 4+2.

With the M15, it was much the same setup with the use of foam tips and the bass filter. The norm filter is actually very good also but the weight is quite neutral. Silicone tips will produce an airier mids and treble but lack a little low-end weight in comparison. The foam tips add a bit more warmth and the bass filter adds a stronger perception of low-end physicality.