The Unique Melody Mason V3+ flagship sees the original V3 from 2017 upgraded, retuned and enhanced with a new carbon fiber shell design. The retail price is $3199.

Disclaimer: The Unique Melody Mason V3+ was sent to us as a sample in exchange for our honest opinion. We thank Unique Melody for this opportunity.

Late in 2017, I was bowled over by the then flagship launch of the Mason V3. So much so we awarded it the best Custom IEM for 2017. Now, almost exactly 2 years later, Unique Melody returns with a new Mason, the V3+, a model they are pitching as having some substantial tweaks and improvements over the original.

Alongside this, the Mentor V3 has also had the plus treatment and we will be introducing that one tomorrow. Just to note, the Mason V3+ we have here is the custom version and not the universal build. Tomorrow’s Mentor V3+ will be the universal monitor variant.

The heart of the V3+ is the same as the original V3. So that means the V3+ is a 16 balanced armature driver monster with a 4-way, 5-bore design using 4 sound tubes and 1 bore designed for their DB-GO tuning module. The configuration is unchanged with 4 drivers for the lows, 4 lower midrange, 4 upper midrange and 4 for the highs.

Beyond that, lots of upgrades around those drivers. The DB-GO module now has better damping so the weighting of bass has more control than before throughout the curve. The tubing is now made of titanium-gold that is corrosion resistant. The internal wiring has been upgraded to silver alloy from the original copper for better conductivity and lower internal resistance.

On the outside, the Dreamweaver fiber shells are now enhanced with a new lightweight carbon fiber material which on the universal format should also mean a smaller shell. Carbon Fiber is also a lot tougher than regular acrylic and does not need to be as thick. Note on custom the overall size should not change except for weight since they are supposed to be an accurate fit to your ear.

The new shell is also designed to complement a new tuning for the Mason V3+. Unique Melody has described the new tuning as more coherent, full-bodied with a better sense of balance across the FR. That means additional bass quality and quantity than before and generally a smoother sound. 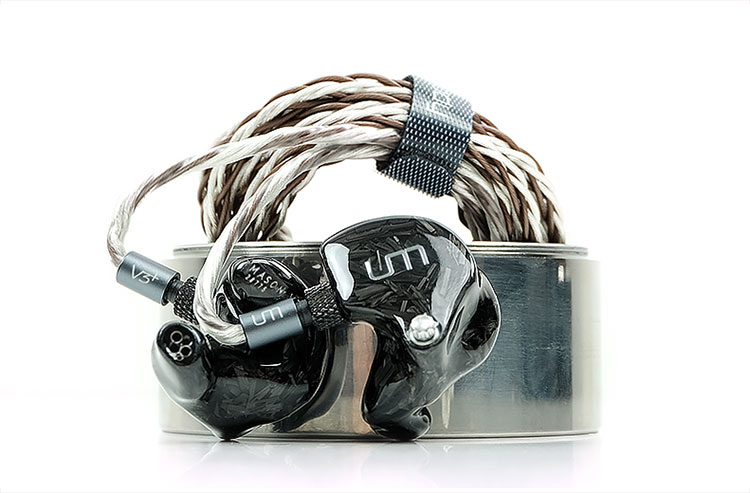 You can now buy the Mason V3+ with what seems to be a superior stock cable than the original Dual Tone from the V3 or you can upgrade for a fee to the new Phanes aftermarket custom-designed cable. The new upgrade cable was made specifically for the V3+. by Effect Audio of Singapore.

The Phanes is a 1.2m 8-core UPOCC Silver Plated Palladium+ Gold Palladium Alloy combination and I presume a 26AWG wire in their UltraFlexi jacket. We sadly do not have one here, we hope to get one by the time we go to the main review. From the looks of it, the barrels and jacks have a much higher quality finish than the stock.

Speaking of the stock, this seems a bigger cable than the original Dual Tone that came with the V3. The original cable was 4-core and this one is 8-core though they do not mention exactly what gauge it is. I am presuming 26AWG. We also now have a matching grey aluminum splitter and jack barrel whereas before it was a silver barrel and heat-shrink for the splitter.

The two-tone wire material of the stock cable seems unchanged from before. Both old and new cables have the same physical overtone of a darker copper and lighter silver wire mix using a PVC translucent jacket. I will confirm for the main review but presuming that means 6N 4-core single crystal copper and the other is 6N 4-core silver, (combined for 8-core).

When we say other, that means that UM has retained that very unique feature of being able to swap around the 4-pin connectors from left to right and vice versa to activate either the copper 2-pin side or the silver 2-pin side. Hence, two unique flavors of sound inside one wire.

The way to change those connectors looks much easier also. Previously, it was an obscure ridge system on the top of a plastic right-angle connector that you really only could detect via physical touch. Now the connector barrels are a stronger metal alloy to match the splitter and jack barrels. They also use a much more legible labeling system on the left and right for faster swapping. 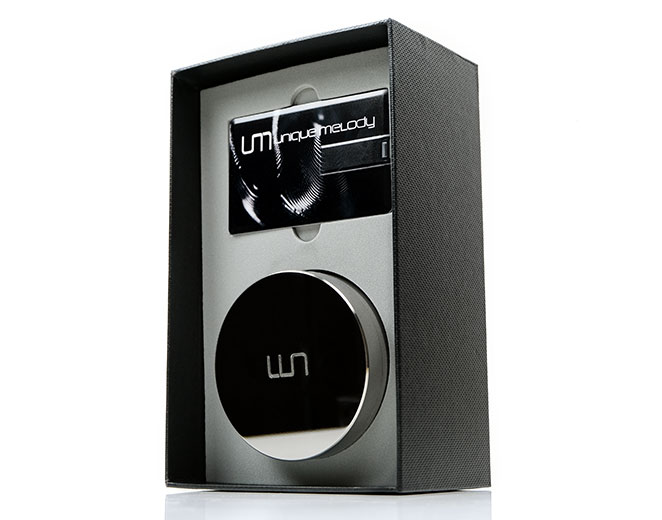 Perhaps surprisingly, outside of a cool little branded paper sleeve on the outside, the UM packaging has changed precious little since the original V3 in 2017. Do I expect a bit more for the price? Possibly, considering what Vision Ears and Effect Audio are doing with their flagship IEMs and the Elysium is almost the same price.

The one change in the line-up since the V3 in terms of accessories is switching from a matte grey titanium threaded round carry case to a chrome-finished titanium alternative. And yes, the chrome finish is a fingerprint magnet par excellence. However, as per the previous matte design, the titanium case is very sturdy and very silent when screwing and unscrewing compared to cheaper aluminum versions. 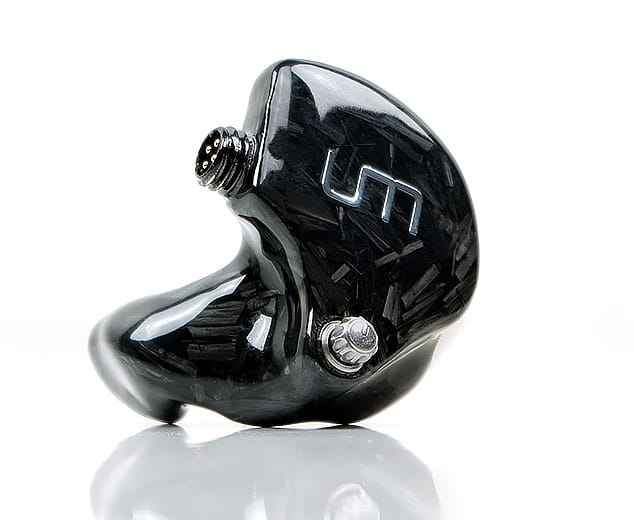 Since it is a custom design you can pick any design from UM’s extensive portfolio of custom builds. However, at the time of writing, I think their site is down for an extensive rework so I am slightly unsure what is possible these days. The good news is that the new carbon fiber design is actually quite dashing and much better than some pictures might suggest.

The shell is a dark smoky translucent black with tons of fibrous materials encased making for a very handsome collage of lines under good lighting.  UM has also infused a very light spattering of silvery flecks in the Mason V3+ design which makes it distinct from the Mentor V3+ which sues gold specs with the same shell design. 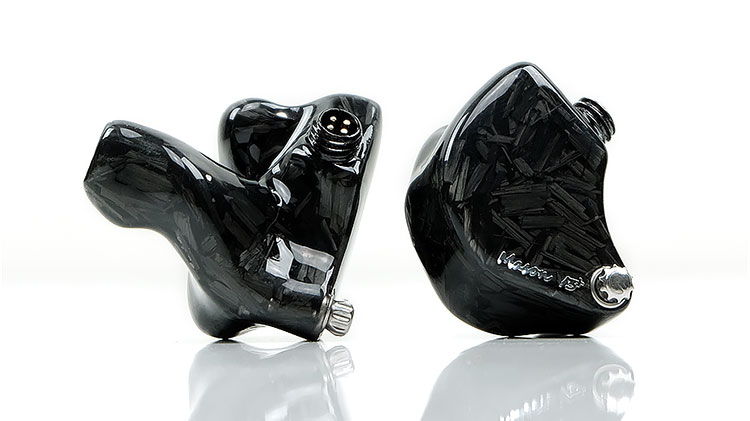 The DB-GO module also looks a lot sturdier with a new screw design that is bigger and grippier than before. You will find this one much easier to work with unsighted than the older V3 version which was thinner and shorter.

Eagle-eyed readers may have noticed the 4-pin connector positioning has also moved forward a touch to the edge of the top plate. On the original, it was slightly further back in the middle. This is a good move as the slightly longer cable connector barrel will clear the ear easier leading to less pressure. 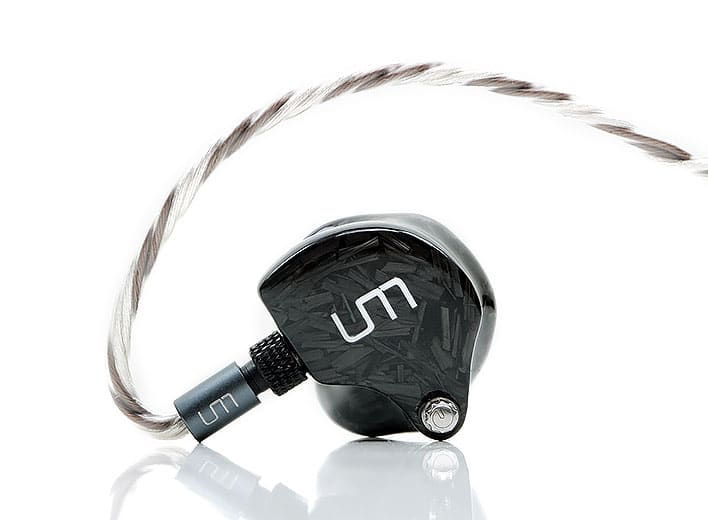 The V3+ seal is fantastic but so was the V3 original so hard to improve on that unless the ear impressions were bad, to begin with. What has improved is the comfort and the extent of passive noise blocking. I can only presume the enhanced passive noise canceling is due to the new carbon fiber materials and what seems to be a slightly longer nozzle.

On the original V3, the Dreamweaver regular design did very well blocking sub-1kHz sounds like air-con hum but I can still hear a vacuum cleaner from outside. On the new V3+, I can hear neither and I am pretty sure both seal just as good as each other.

The movement of the connector makes a huge difference also. The cable now completely clears my ear whereas the older V3 right angle connector and central placement pressed against my ear. A much comfier fitting. 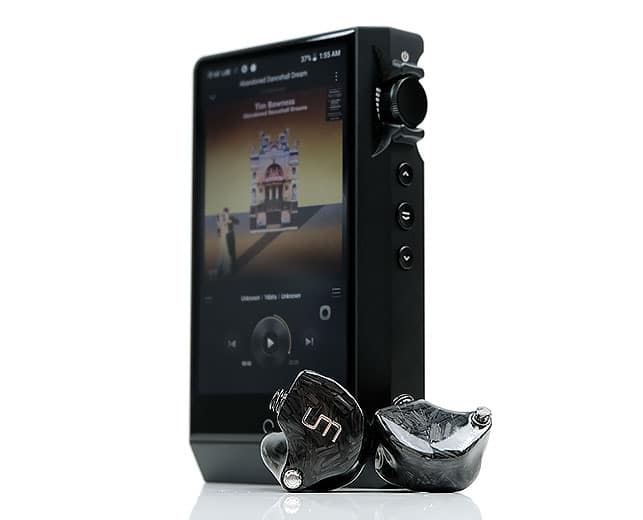 Starting with a quick opinion on efficiency. I never found the original Mason V3 to be that sensitive compared to the liked of Solaris and Andromeda and you can expect to find almost the same setup with the V3+.

Yes, the numbers below suggest the V3+ is the more sensitive of the two IEMs at 107dB SPL compared to the V3’s 104dB. However, in real-world testing, I found little difference between them for volume and drivability. You need a bit more juice than normal to drive the V3+ but it is generally more efficient than hybrid electrostatic monitors current out on the market today.

Noise performance is also good with no noise from either source but we do have noisier sources we will throw into the mix for the main review.

Compared to the older Mason V3 the new tuning is quite different for me. Unlike the V3 where I preferred the copper with the DB-GO on, this time on the V3+ I prefer the silver side of the cable with a rare foray into the DB-GO bass boost.

The reason for that is the weightier, richer and smoother sound of the V3+ compared to the original V3. It is less “reference-like” and more colored than the V3 with a bass-to-mids bias and a wetter, fuller treble tone but slightly less sparkle also.

With the copper part of the dual-tone cable activated the V3+ low-end is weightier, warmer and with a bit more sub-bass quantity. I do not think DB-GO has been tweaked in terms of that subtle 4dB boost but it does seem more effective with the V3+ because of how more physical stock low-end tuning.

The overall timbre has changed also from the original V3. This time it is much more even-harmonic biased with a smoother edge, more weight, but less odd-harmonic overtones. It sounds like UM have dialed down the treble presence a little or lowered the upper mids with a more balanced treble.

Hard to say at this earlier stage but the original V3 sounds like it has a bit more sparkle and a more forward lower treble focus. The new tuning sounds much more powerful but a bit more rounded and not quite as ‘treble peppy’, especially with the copper side of the cable.

This is where I find myself moving to the silver side of the Dual-tone cable on the new V3+ and resisting using the DB-GO unless I want to let rip. I am getting the same solidity but more mids and treble clarity. The overall tone is still weighted, smooth and forgiving but this time the harmonic balance is much better for me and it is likely this side of the cable is going to get about 90% of my listening time. 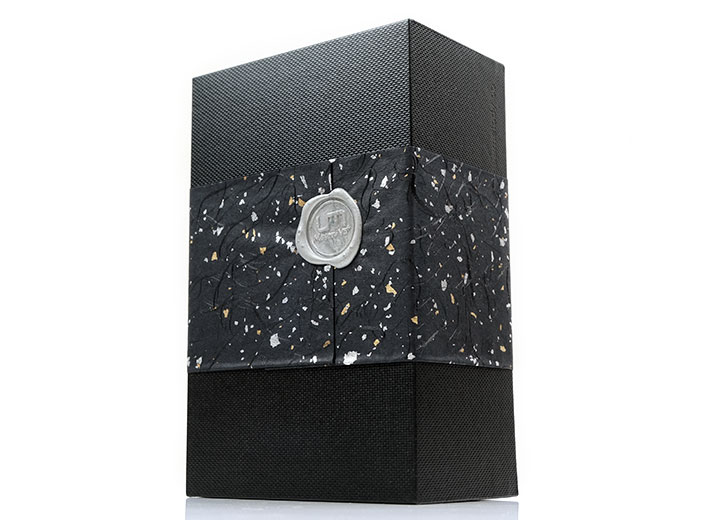 The V3+ physically is an upgrade on the original. The comfort is better, the seal and passive noise isolation is crazy good and that carbon fiber shall is very refined to the eye in real-life.

The sound has definitely changed. From our initial listening, if you want some solid weight on the low-end, a bit more warmth and richness to instrumental timbre and a very forgiving top-end then the V3+ will give you plenty of that. The original V3 is very much the lighter cleaner sound contextually speaking.

I would love to hear this with the Phanes upgraded cable and just see if there is a general shift in tonal emphasis with the different materials. One of the things I find with the Mason cable system is the slight lack of flexibility for rolling alternatives to the stock so kudos for offering a high-end alternative from Effect Audio. Stay Tuned to see if we manage to get that in the main review soon!