The Blackwood, while more expensive than the ZxV, is not necessarily a direct upgrade from it. They have slightly different sound signatures, akin to the Sennheiser HD600 and HD650 in that the ZxV and Blackwood are unmistakably related, but their presentation is where they diverge. The ZxV is easily a more exciting headphone than the Blackwood, with its slightly more prominent midrange, brighter treble, and heavier midbass. The Blackwood, in contrast, aims for a more neutral, relaxed sound. It sounds vaguely like the HD600, but with a less forward midrange and more refined bass.

At first blush, I was instantly reminded of the Enigma, but while the charm of the Enigma is its beautiful sound signature and huge soundstage, the Blackwood sounds more neutral and natural. It’s the kind of headphone that doesn’t really impress until something that lets it shine starts playing. But when it does shine, it’s absolutely breathtaking. The Blackwood is the first headphone in a while that’s stopped me in my tracks with a song. I encourage anyone who ends up with a Blackwood (or any headphone) to find a nice rip of Chris Thile’s Stay Away and just lie down and close your eyes. They have the spectacular ability convey emotion in a song in a way few headphones can. It is without a doubt slightly colored, but in a way that accentuates the timbre of wooden instruments. It’s hard to explain without being too vague, but it’s easily one of the most pleasing sound signatures I’ve ever heard.

The Blackwood’s treble, in comparison to the ZxV, is smoother yet somehow more detailed. The 10k peak that the ZxV and every other T50RP mod I’ve heard is somehow almost completely gone in the Blackwood. As a result, I’ve been able to use the Blackwood for entire days, only taking them off occasionally due to their weight. There is slightly more treble in the Blackwood than the ZxV, but it still retains a warm tilt. 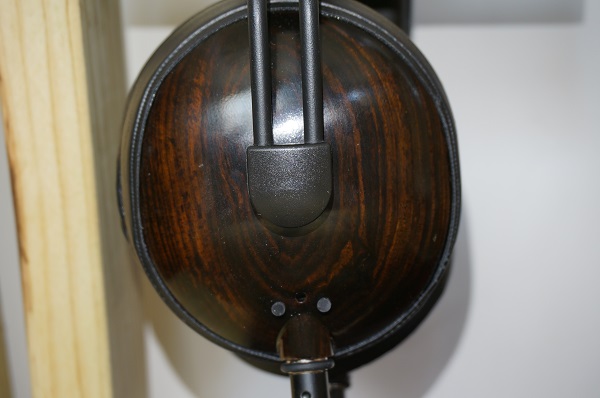 The Blackwood’s midrange is its centerpiece. While it’s not forward like the ZxV, it manages to capture the listener’s attention. Somehow, everything just sounds “right” with the Blackwood, even with the knowledge that the sound is colored. The Blackwood takes the perceived disadvantages of a closed headphone, such as a small soundstage and slightly cramped presentation and makes them positive attributes. An acoustic guitar session actually sounds it’s being played like a small coffee shop, with the vocals just in front of the listener and the individual plucks being easily discerned. I’ve found that the Blackwood tends to work better with slower music than the energetic ZxV due to its better sense of control. Not to say the Blackwood is out of place with an orchestral piece. Its separation works wonders; violins sound sublime (remember how I mentioned the Blackwood loves wooden instruments?) and since the Blackwood lacks the 10k peak, brass has great tone, but is never harsh. Trumpets do sound slightly smoothed over though.

The Blackwood’s bass is subjectively superior to the ZxV as well. It has markedly more sub-bass than the ZxV or any other T50RP mod I’ve ever tried (note, as of this review I have not tried the Alpha Dog Prime). It’s not on Ultrasone levels, but with one port open, tracks like James Blake’s Limit to Your Love and other sub-bass heavy songs were fantastic with the Blackwood. While the midbass is less forward than on the ZxV, I’d still put it slightly above neutral. It’s actually cleaner than the ZxV’s bass, which occasionally slightly bled into the mids. The slight taming of the bass leads to even better detail transitioning from the bass to the mids. Listening to a bass heavy song with vocals is always great fun with the Blackwood due to its fantastic control.

While the ZxV has the coloration I dislike, it is able to make up for it by providing what is possibly the most fun closed headphone I’ve ever used (it’s a close tie with the TH900). Closed headphones under $500 tend to lean towards two extremes: severe V-shape like Ultrasones or Denons and bassless and lifeless like AKG’s K550 and K271. There are of course exceptions in between, but I’ve yet to find a closed headphone that’s cheaper than the ZxV that sounds both fun and mid-forward without the treble peak (The Audio Technica W1000X would have been it if it weren’t for its slightly harsh sound). The ZMF Classic/Master Model does get close but is slightly too warm to be considered fun, though it is still the best $300 closed headphone I’ve heard, beating out the Mad Dogs in a preference battle. Overall, for $500 (The same price as a new RS2e, by the way), I can’t think of a better option for those wanting a fun headphone but don’t want to sacrifice midrange.

The Blackwood put simply, is one of my favorite headphones ever, regardless of the cost of design. While it’s not what I would call a reference headphone due to its unique coloration, it’s the headphone that’s gotten me back into looking for new music. I’d never understood the phenomenon of being brought to tears by a piece of audio gear until I plugged in my Blackwoods for the first time. It wasn’t exactly like rediscovering music, it was discovering the true emotions in music. $700 is a significant amount of money to drop on a headphone, but now that I’ve heard the Blackwood, I never want to be without it.