Sony recently launched a whole plethora of DAP’s to the market in 2014 and 2015 show no signs of changing despite the shocking news that they are pulling out of audio and video markets shortly. The Sony NWZ-A17 is part of their smaller more budget conscious range of DAP’s but as Mike finds out there is a lot more to this DAP than meets the eye.

At $299, Sony’s A17 performs incredibly well considering the size and feature set jam-packed into this little thing.  It’s so cute and tiny, but like my 9-year-old cat, it has a serious case of primal ferocity under its skin…and I mean that in a positive way.

The player is a minuscule 4.5 inches long, 1.75 inches wide, 0.3 inch thick, about half the size of the FiiO X series in all aspects.   The player is also rock solid, offering full aluminum housing.  It really gives off a nice high-quality vibe, something that feels well built and weighted.   No case though, which saddens me.  The A17 cannot be used as a DAC with your computer, which is something some higher quality DAPs lately have been able to do.  I was also unable to confirm what internal DAC Sony has tossed in there, but it is almost indistinguishable from FiiO’s X3 in sound quality.

It comes stock with only one Micro SD card slot and 64gb of onboard storage.   As of the moment, I have a TFTEC SD to Micro SD adapter with a 256gb SD card. Punch that into the calculator with that 64gb on board from the A17’s internal memory and you get a happy face…my happy face.   A solid 320gb of portable library goodness…yum. Truthfully though, it really upsets me that hardly any portable players offer a standard SD ( which are always cheaper and offer larger storage capacity over Micro SD ) but I really can’t complain if literally, EVERYONE ignores standard SD and how much more affordable and responsive they are.  My 256GB card cost less than a 128gb Micro SD…and is literally 2x as fast with library scanning on pretty much every device I own that uses an SD slot.  While on the subject of scanning media, the A17 handles 200gb or so of Flac files in about 5 minutes.  By comparison, the FiiO DAPs require almost double that time period to fully update the media library.  The player also uses a proprietary connector for charging and data transfer. The A17 only offers a standard 3.5mm output, no fancy alternate output types, sadly.

From the Home screen, you can navigate to 12 different menus.  Yes, 12 and by golly, they all are actually functional.  Wudda’ ya know, a fully working product without a single defect, glitch or serious problem in the UI.  Mad props to Sony for making sure the A17 was 100% from the get-go.  The menu set includes MySense Channels, FM Radio (You kids remember what Radio is, right?), Playlists, Pictures, Music, Video (Yes, this player does video as well), Bookmarks, Podcasts, Bluetooth settings, Settings Menu, SD Settings Menu and finally the Currently Playing Window.  Phew.  I’ve found that the Playlist functions are not as easily accessible as the Bookmarks window, which is another subset inside the primary Music menu. 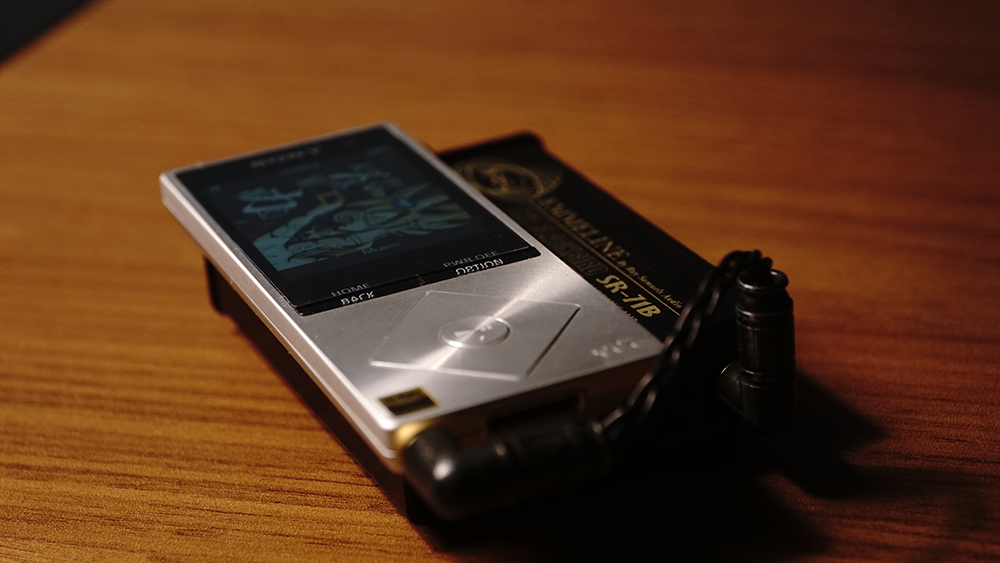 Below the screen lay two buttons, the Home/Back button and the Power Off/Options button.  While a song is in play, tapping the Options button will open a very complex subset of optional sound settings.  One of these is called Bookmarks and funnily enough there is no Add to a Playlist inside this menu.   Bookmarks come with a set of 5 folders, of which I’ve no idea what the max capacity could be.  I’ve a lot of songs in there, so I am assuming the data storage for each bin is fairly large.  Anyway, simply selecting the Bookmarks option will place that song into Bookmarks 1-5, your choice.  It works infinitely easier than Playlists, which I’ve yet to figure out and fully understand why it even exists if there is no way to actually add a song easily to “Playlists” on the home screen or in the Options menu.  For some reason, after the player updates my SD card, it generates a randomized Playlist inside that weird Playlist menu.  No rhyme or reason to anything inside of that, I’d not touched anything in that area but the player decided to toss a ton of music into it against my will.  Stick to Bookmarks and consider that your “Playlists” function, instead of the actual Playlist menu that seems to be in a state of disrepair and in need of an update to fix it.

I had about 4,000 songs in total on my SD card and the A17’s Internal Memory, but it was registering more than 8,000 available.  I’d noticed that in the Albums window, some tracks on the device were listed twice.  I’ve not found a way to fix this.  Tracks are not doubled up on the SD card, but they are doubled up once it plays through the A17. Weird, because the storage size doesn’t alter.  200Gb on the SD card, 200Gb on the A17, yet most of the songs are listed twice.

Once inside the Options menu, you have all of the following subsets:  Play Mode, Playback Range, DSEE HX, Hi-Res Audio Effects, Clear Audio+, Sound Settings (EQ), Dance Karaoke/Lang, DPC (Speed Control), Display Lyrics, Detailed Info, Set An Alarm as Song, Send File, Remove from Bookmark.  Playback Range will loop a specified section of a track, which is awesome for musicians who want to learn an awesome guitar riff and don’t want to continuously fast forward and rewind the track to a certain spot.  The rest of the basic functions are as expected, so I won’t detail them.