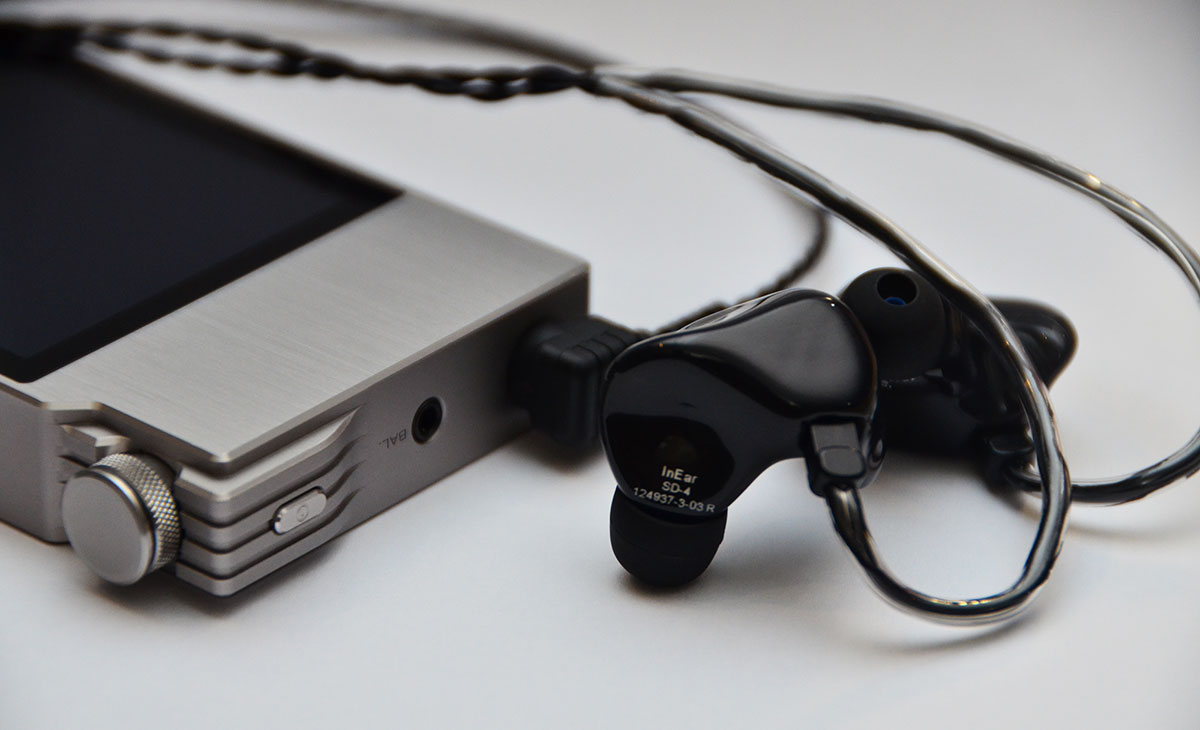 If you ask any mass consumer about Inear, the most you will get as an answer would be a shrug.  Inear, of Germany, has only been heard in the audiophile community from a couple of years ago, but they have been in the business for some time now as makers of Custom In-ear monitors and hearing protection for musicians.  They are known there for their LivePro Series of Custom In-ear monitors which I see a lot in European musicians and artists; proof that these people know what they’re doing; with musicians being the picky ones as to what kind of sound they want to hear and will easily not use a product if they are not satisfied with its sound.

Let’s talk about the LivePro in another review.  Today, I wanna talk about the StageDiver series; specifically the much anticipated StageDiver 4; the flagship Universal IEM offering from Inear.  I have been waiting for this the longest since I am well aware that sooner or later they will have this one since the SD series is solely based on the LivePro series and the SD has only until StageDiver 3 while the LivePro has the 4.  The number, by the way, refers to the number of receivers inside each channel.  The SD4 is a 2-way system with four Balance Armature receivers on each channel.  It’s always good to find manufacturers who are not into the multi-BA wars and focus more on the tuning.  I always believe that even a 2-4 BA receiver IEM, if properly implemented, can be on par if not better than those offering upwards of double digit BA ones.  I also want to mention that I have been using the SD4’s younger brother, the dual-BA SD2 for months now.  I use it for music and yes, as its name implies, on stage for monitoring too.

What’s in the Box

Well, let’s put it this way, the SD4 does not come in a fancy box of sorts.  It doesn’t have a box actually.  What you get are the IEMs themselves which come in black (options for a wood faceplate are available in the Inear site), a black twisted IEM cable in the standard 2-pin configuration, a set of Silicone tips (XS, S, M, and L), a 3.5mm to quarter-inch adapter, and 3 sachets of IEM cleaning wipes.

All of those are inside a black Pelican 1010 case emblazoned with the Inear StageDiver logo and with an attached carabineer-style hook.  From the looks of it, it’s not more of a mass-market product, but a product designed for audiophiles and musicians.  I am quite reminded by most pro audio equipment like the Focal Spirit Pro and the Sennheiser HD26 headphones when I saw the packaging.  Simple and practical, I must say.

As with any product hailing from Germany, quality is top notch and the SD4 is no exception.  Holding the SD4 in the hand feels different from most universal IEMs.  It even looks different from most universal IEMs.  The first time I saw the SD (StageDiver) series, it elicited a reaction that it’s a custom IEM.  It looks like a custom and feels like one when you wear it.  The construction of the SD was done by overlapping 500 ear impressions and getting the average shape of those; making the SD4 look and feel like a ‘universal’ custom.  I let my wife and some of my friends try the SD4 and some of them find the shape too big.  Inear addressed that by having the SD S series.  It’s totally the same as everything in the SD range, albeit in a smaller shell; hence the S moniker.

I have tried many universal IEMs and none of them has the stability of the SD while in your ear.  You can do just about anything and it will stay in your ear like a suction.  I use it for my daily commute, occasional runs, and even on stage as a monitor.  No issues whatsoever. 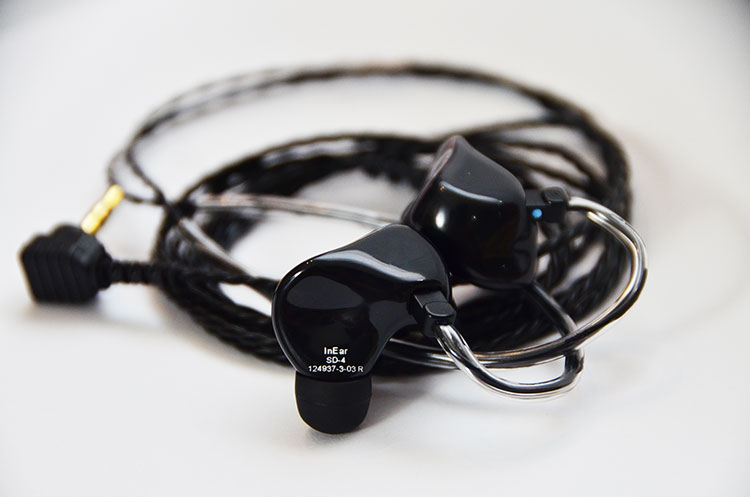 The SD4 comes with a 4 ft. black cable now as opposed to the clear with the SD1, 2, and 3.  The clear still looks good, but it becomes green in time probably because of oxidation.  I’ve heard many of that complaint and I have experienced it myself with my SD2.  The black cable prevents that.  The wire inside might still oxidize, but since the insulation is black, it won’t be obviously visible.  The cable is worn over-ear and unlike most, the female receiving end of the dual pin in the shell is recessed allowing part of the hub that holds the dual pin to be also inserted.  I find this helpful in preventing the pins being accidentally bent, but might be a problem for some because the connection is really tight.  You must make sure the cable is perpendicular before pulling it.  Imagine you’re not King Arthur and you want to get the Excalibur out.  That tight.  I ended up with bent pins when I removed the cable of my SD2 for the first time.  Rookie mistake.  Good thing is those were the green oxidized cable.

The SD series comes with a color-coded ear wax filter which is replaceable but is sold separately.  Probably why it doesn’t come with the usual tip cleaner.  With the stock twisted cable, microphonics are limited to a minimum and the isolation is similar to customs even with the included tips.  I am using the XS tips with mine.

In a nutshell, the SD series would be such: SD1 mid-centric, SD2 close to neutral and airy, SD3 bassy, borderline boomy at times, and the SD4?  Well, I find it as having both the characteristics of the aforementioned mid-centric SD1, airy SD2 and the bass quantity of the SD3, but more refined.

I have owned, the SD4’s younger sibling, the SD2 and what I love most about it is its airiness.  When things are airy, they give that perception of a wider stage and you don’t feel like you’re listening to an IEM.  That airiness still continues with the SD4.  Every time I put it on, it’s like there for a few minutes only and it does the disappearing act very well.  The width of that stage immerses you in the music that it seems you are in the middle of band/orchestra or beside the vocals, hence the disappearing act of the IEM.  The stage is more on the width though and with less height and depth.

I would say that the SD4 has a bright-sounding sound signature and great at micro detail-retrieval.  High-frequency registers sound natural and full-bodied even with the obvious boost to the highs.  I notice them to be borderline harsh with some rock tracks like Fastball’s ‘Charlie, The Methadone Man’ and ‘The Way’, albeit it could also be on how the tracks were mastered since it was far from harsh when I listened to Rage Against The Machine’s debut album (one of my favourite albums).  I was still enjoying them, but I have to reduce the volume from 50 to around 40 in the AK120II.  Transients and timbre are well reproduced; making the overall sound really natural and similarly close to a dynamic driver IEM.  I have quite enjoyed listening to Jennifer Warnes’s ‘The Panther’ especially the early parts of the track where it’s just the guitar, percussion, and vocals.  Details sounded very natural.

The SD4, though having a bright signature, is actually really full-bodied; and that somewhat balances the treble.  Many IEMs have successfully achieved to extend way beyond 20 kHz, but have made the treble sound metallic or tizzy, not the SD4 though. 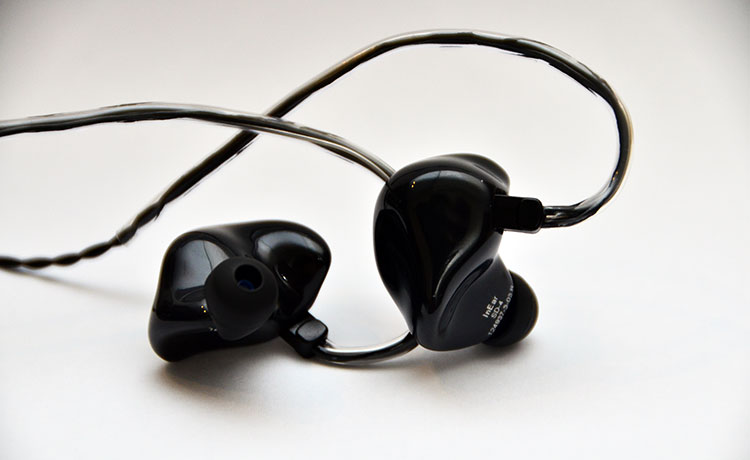 I have to have a separate part of the review where I will just talk about the SD4’s lovely low end.  On paper, the bass should extend in the 20Hz region; though there is no FR chart that’s included, I strongly believe that it does. Oh, it really does.  This is the part of the SD4 where I was expecting a lot of improvement from its predecessor, the SD3.  The SD4 has a bass that is hefty, controlled, very palpable, spacious, and so much more.  Inear, this time, focused on improving the quality of the low end, which is really lacking in the SD3.

The bass has that warmth that makes it really felt in the room, or at least you have that out-of-your head feeling in the low end.  I can easily determine if the bass guitar has been plucked, picked, or slapped in any particular song; or if it’s a synth, fuzz, electronic, Cello, or an upright.  I have been enjoying Bruno Mars’s ‘Moonshine (The Futuristics Remix)’ these past few weeks with this.  The bass detail is just astoundingly good.  I have heard that song many times before, but not like when I heard it with the SD4.  Do take not that the song I mentioned is Pop with a lot of synth and fuzz in the low end making it haphazard, but the SD4 was still able to retrieve details that might have probably got lost in the mix.

The SD4 is one of the best bottomed in any IEM that I’ve heard so far, and I have heard quite a few of them here from the likes of Noble, Heir, Lear, JH, Fitear, 1964, VE, Westone, UE, UM, Sennheiser etc.  One gripe of the SD4, I can say, is it has difficulty keeping up with fast EDM.  It’s not in any way slow though.  PRaT is great with most genres but could be better especially with fast EDM.

Owing to its aggressive character, the mids also show the same characteristic of having a more forward approach.  Mid frequencies amazingly shine through really well and does not have any hint of bass leak.  It may not be as smooth as the TG334, but its rendering is very good and very natural.  Listening to Alison Krauss’s ‘It Wouldn’t Have Made a Difference’ is a joy in the SD4.  The strings sound really crisp coupled with Alison’s sublime vocals.  Same is true with David Elias’s guitar tracks and Yiruma’s immaculate Piano.  Inear did very well in balancing the SD4’s texture.  It is not velvety smooth, but it’s also not heavily grained.  This balance resulted in the SD4 having some sweet mids.  With the SD4’s mids, I have taken front row centre and into the music. 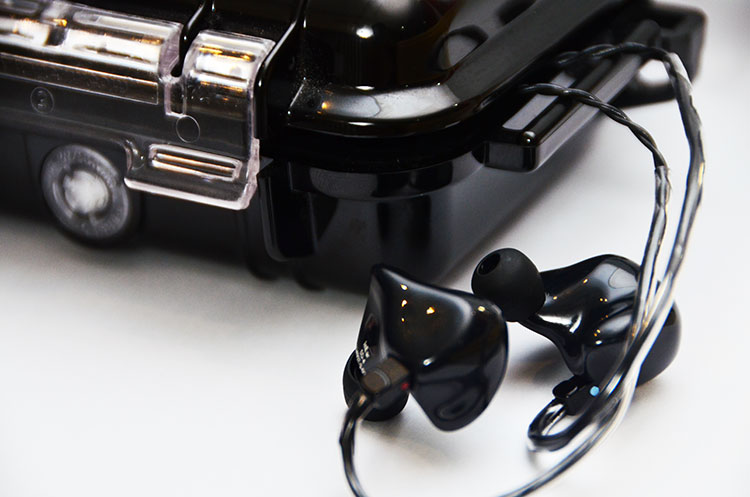 I have had many universal IEMs through the years, but I have had not anything like the SD4’s all-roundability.  You can pretty much throw anything in the SD4 and it will play it really well.  Albeit having some minor PRaT issues with fast EDM, I think the SD4 is a very good universal IEM. Comfort is also top notch.  The shape of the IEM allows it to rest securely and comfortably in your ear like a custom.  The fit issue has been dealt by Inear with the introduction of an ‘S’ model for every StageDiver.  Smaller shell, but same sound be it the SD1, 2, 3, and 4

Aside from looking like a custom, it also feels like one in the hand.  And with removable cables, fine tuning to your preferred sound is as easy as a cable roll. Many thanks to Marco Ramisch of Inear and Jayden Zhang of ConnectIT Singapore for providing a review unit.

Price MSRP:  SGD 1299 or 679 Euros from Inear site (ships in Germany and select European countries only)