The iBasso DX120 is a brand new mid-fi pocket-friendly reference DAP featuring a touchscreen and balanced output features. It is priced at $399.

Disclaimer: The iBasso DX120 was sent to us a sample in exchange for our honest opinion. We thank iBasso for this opportunity.

To learn more about iBasso product reviews on Headfonics you can click here.

The DX120 is the 7th DAP in as many years to be launched by iBasso going all the way back to the original and highly respected DX100 in 2012.

Priced at $299, it takes up a position in their DAP line-up as their new entry-level media player below the Android-powered DX150 which scored really well in our review a few months ago. The focus on the DX120 is quite different to the higher-end DX150 and DX200.

The more expensive DAPs use the iBasso Amp cards with an open Android system (now in beta testing for Oreo) as well as a level of wireless connectivity that is in tune for modern-day audiophile streaming and local media playing tastes.

The DX120, however, is all about achieving the best performance out of its chipset design for playing music locally. This is almost full-circle in DAP objective design, going against the broad convergence purposing of Android DAPs.

What this means is no streaming via WiFi and no Bluetooth. Everything on this DAP is geared to maximizing the sound of your own audio collection.

The iBasso marketing collateral for the DX120 is, as ever, more on the technical excellence of their designs and less on the multiple usage scenarios that FiiO tend to use.  Every key feature emphasized is on the capability of the DX120 as a pure music player.

From the high-end single AK4495 DAC implementation, XMOS USB receiver, and the PLL+TXCO oscillator design iBasso have targeted the audiophile market via the quality of the DX120 audio signal output. Even the Mango OS has been reworked on a coding level to make it faster and more engaging to use on the DX120. 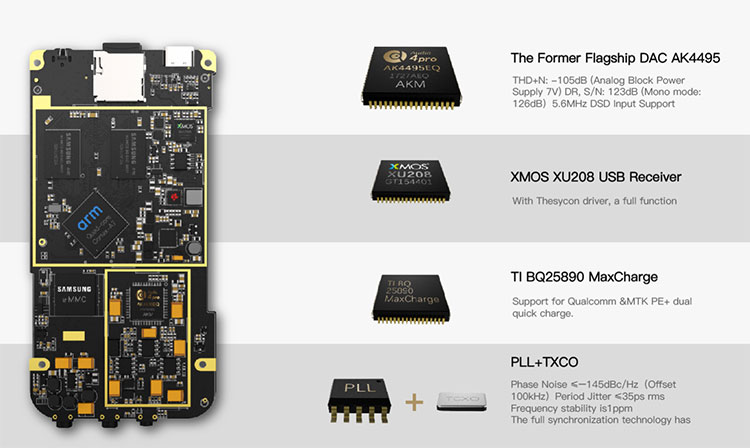 And it is not just the guts of the DX120 that has been given the iBasso “love” but the exterior has also been given an all-new modern design with a petite and pocketable form factor. I think that is important for iBasso because their DX10 and DX200 DAPs are quite big compared to competing offerings.

Companies like HiBy, Shanling and to some extent FiiO are putting out smaller designs that appeal to people who like their music to be very portable. By downsizing, the DX120 also recaptures some of that delightful DX50 and DX90 pocketability. 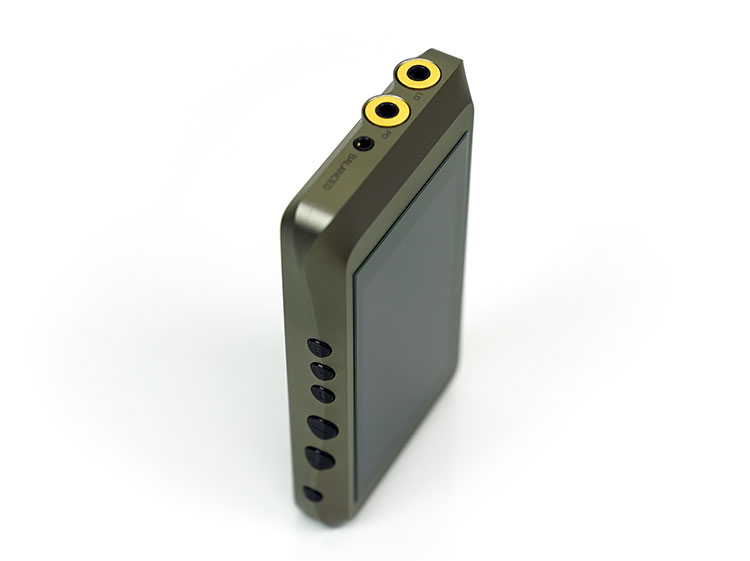 So, let us take a close look at the all-new design for the DX120 because it is a complete break from their boxier interpretations of the last few years. Size-wise, it is a return to the DX50 and DX90 pocketability form factor but with a much more attractive aluminum body.

Gone are the rigid and traditional dimensions and in comes a tastefully curved and very attractive build aesthetic.  This is more sleek than industrial and truth be told I really like it. iBasso has done a great job on the cornering which is very gradual and very smooth. It is unlikely the DX120 is going to give you any level of discomfort in the hand.

The DX120 comes in two finishes. The one in the pictures is called Earth Brown and the alternative option is a brighter sky blue. Both have a little ribbed partial panel finish at the base of the LCD screen and also running just underneath the buttons on the sides.

The back panel seems to be a black glass finish though the unit comes with a tempered glass screen protector already applied out of the box so it should be fairly well protected. iBasso also supplied a basic silicone case but weirdly it has no back to it so if you want complete protection then grab one of Miter’s new DX120 leather cases. 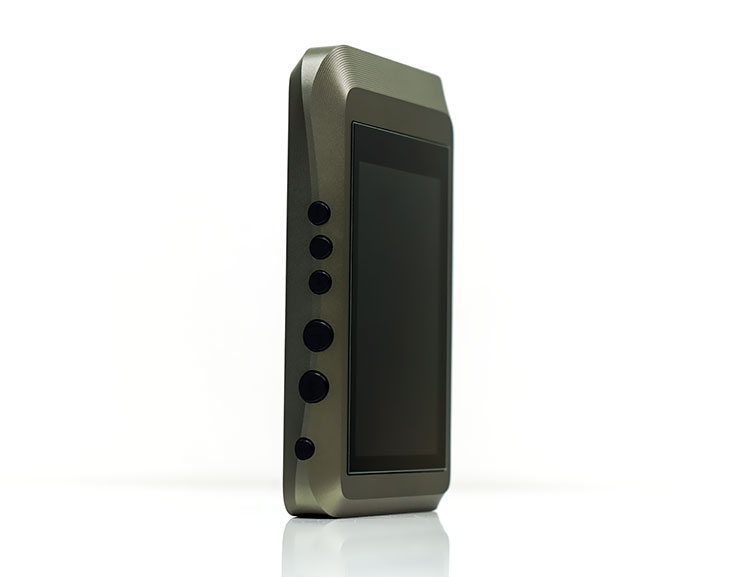 The DX120 uses a 3.2-inch 480X800 OCA-bonded IPS capacitive touchscreen with a flat panel glass protector. Out of the box, iBasso has pre-applied a secondary tempered glass screen protector to further protect the LCD screen. The bezel is a bit on the chunky side at the bottom and a little thinner on the top and sides. It is not that intrusive but it is not quite the ‘end-to-end’ 2D glass experience like the R3 or Shanling M2s.

The color saturation and sharpness are very good head-on though the iBasso thin font type in some instances is a little harder to read, especially with long song titles on the playback screen. Also, the backlight is not as strong as it could be. At full strength I find the strength of the lighting to be just average and it could do with being a little brighter. The angle of viewing is competitive at a minor tilt but over 45-degrees and you start to struggle with what you can see on the screen.

The touch control is actually quite snappy and overall an improvement in response times over the DX150 and DX200 screens. Both swipe and touch controls on the DX120 using a 30GB loaded on a 128MB card produced no real noticeable lag. I doubt this is a multi-touch experience and Mango OS does not really produce any multi-touch opportunities to try out.

As with most media players these days the control system is split between touch and physical. Here the physical duplicates a portion of what the touchscreen can do and is included to allow you to operate the player “sight unseen”, for example, in a pocket and of course powering it up or down.

All of the physical controls are housed on the right-hand side and follow the central curve of the player’s side panel. The positioning of the control at the tip of the curve is a practiced technique designed to draw your fingers in naturally to easily find the buttons.

The smaller first three buttons towards the base of the player control playback. Short pressing will allow you to skim through tracks, play, and pause. A long press will allow you to fast forward or reverse through the selected track. Long pressing the play button will lock the screen.

The larger two buttons control the volume and it is the only dedicated set of buttons that are not duplicated by any touch functionality on the screen. You cannot control the volume in any other way. The visual interface for the volume on the screen is also quite nice. You get a total of 100 digital steps in the DX120 volume control, each step offering a half-dB increment.

The only caveat in an otherwise seamless button layout is the tiny power on and off button which also duplicates for the screen on and off. For me, it is a little too small.

I get that it is flush to the body to prevent accidental operation though the accidents would be largely benign in nature. Accidental volume control pushing could be much more detrimental to the listening experience on the DX120 and these buttons are quite big.

Without the silicone cover, it works ok but once you put that case on the DX120 it takes considerable pressure to operate it due to the silicone’s thickness. I find the volume control buttons easier to manage with the case on so a power button of a similar size or a little less flush would be much easier to work with. 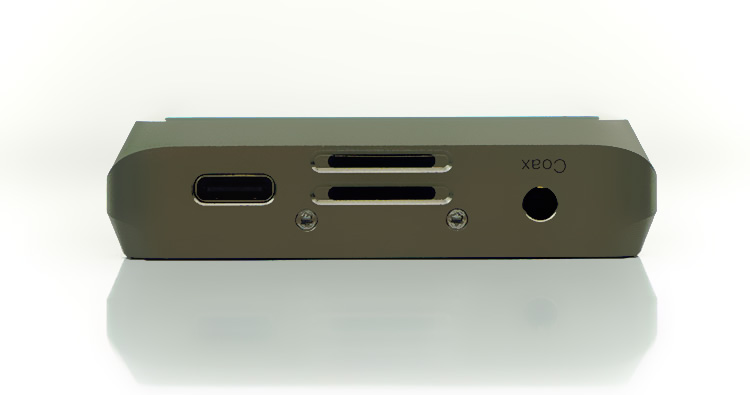 The inputs and outputs on the DX120 are really good and cover most needs. The only thing that seems to be missing is an optical output but given it has a coaxial option that concern may well be rather moot. The DX120 has also switched to USB-C and dumped the older micro-USB to bring it in-line with the DX150 and DX200.

The USB-C port functionality includes quick charging and USB-DAC functionality. You also get 2 slots and not just 1 for memory cards which is a return to the excellent DX80 expandability options.

On the base of the DX120, you have 3 analog outputs including a dedicated (not shared) line-out operating at 1.8V, and a set of single-ended 3.5mm and a 2.5mm balanced jack sockets. No room sadly for 4.4mm on this device though the size of the 4.4mm socket might have made the design unrealistic.

Yup, it is the return of dual slots last seen on the DX90 and DX80 and something which I am a big fan off. This makes sense given there is no onboard memory on the DX120. Since the focus is on this being a pure music player the need to give it as much room as possible to handle large files or large media libraries is logical.

So far 128GB cards have posed no issues for me and these are the crappy low-speed cheap stuff off AliExpress so that is a positive sign. Faster legit Sansdisk 64GB cards with DSD, FLAC, and MP3 loaded without any problems. I am told by iBasso there is no 20000 file limit on the DX120 Mango library manager either so the sky is the limit.

Card management is via the USB settings in Mango and you can set them to automatically mount and be read via Windows or Mac as well as start to drag and drop files onto the cards.

The use of USB-C on the DX120 means we now have the ability to quick-charge from zero to 100% in just under 2 hours. Power banks with quick charge capability will work very nicely indeed with the DX120.

iBasso have thrown in a 3.8V 3700mAh Li-polymer battery into the DX120 which is fairly sizable in this class of DAP. The rated playback time is an excellent 16 hours which is about 4-5 hours longer than the Cayin N5ii and over 5 hours more than the HiBy R3.

Our own testing got a hefty 14+ hours with a relatively light load of 16-32Ω IEMs and about 12-13 hours with some higher impedance and harder to drive headphones. That is pretty impressive. The lack of superfluous background tasks from the likes of Android including WiFi and BT does help to prevent unnecessary battery drain on the DX120.

Final results may also vary depending on your own personal settings such as how bright the screen is, how much button-mashing you do and the level of track decoding required. 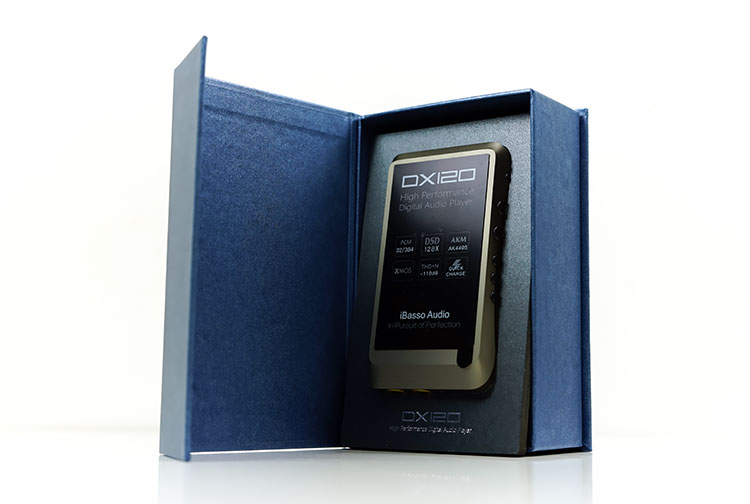 The packaging is not quite as expansive as the DX150 or as alluring as the DX200 but then again, the DX120 is coming in at the cheaper end of the market so it is within expectation. The retail box is a slide-out and flip-lid design with the DX120 on top of a blue-colored pull out accessory container. Inside you get the following accessories – 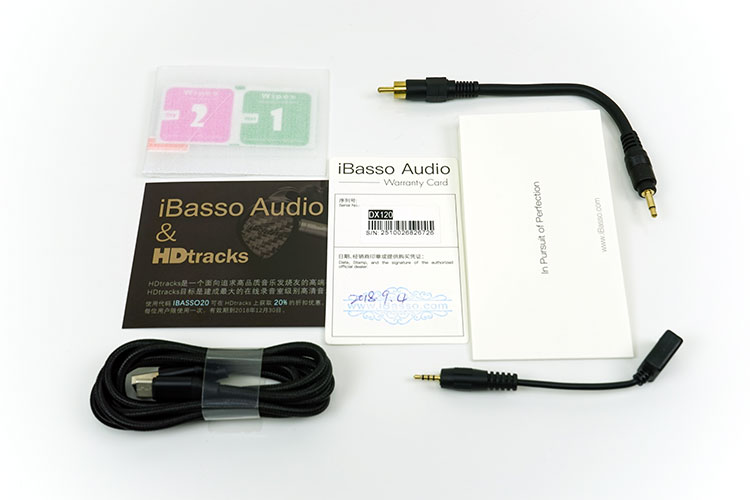 I almost never use the burn-in cable, preferring to simply play and listen to any changes on the go with iBasso DAPs. I am told though it is still a popular request with their DAPs hence its inclusion. Note do not use it with a full volume load, set it to normal listening levels so unnatural heat is not generated which could damage the components over a 100-hour period. 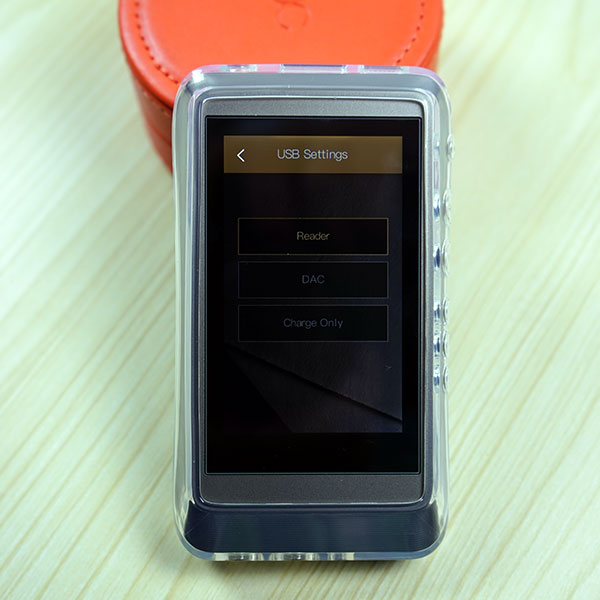 I am not a big fan of the supplied silicone case. Apart from the fact it has no rear panel protection the thickness of the silicone presents jack and USB-C cable connection issues.

Some wide-bodied jacks cannot connect as the silicone layer prevents them from making solid contact. The same also with the USB-C slot. Shoving in memory cards is also a bit of a pain. It will protect the sides and front panels fairly well though to be fair.

I believe Miter have a dedicated leather case for the DX120 for around $35 which you can find here.  You can get it in blue and black. Apart from it looking rather sexy, I suspect it may offer better rear panel protection and allow jacks and USB cables to easily connect.