The Final D8000 Pro is a co-flagship planar magnetic headphone and the second of the Japanese firms’ D-Series planar line focusing on the audio professional. It is priced at £3,999.

Disclaimer: The Final D8000 Pro sent to us is a sample in exchange for our honest opinion. We thank the team at Final and HiFi Headphones for giving us this opportunity.

I had a lot of fun reviewing the original D8000 back in 2018. It was one of the more surprising high-end headphones to come out back then with a bombastic driving sound that worked so well on a personal preference level.

This was an easy Writers Choice For 2018 just as in 2019 the Rosson Audio Design RAD-0 with a different sound had that same joyful approach to music in general.

So, in late 2019 Final come back to the high-end table with a new version of their D8000, the D8000 Pro. It is slightly more expensive than the original but with some advertised physical improvements and a sound signature that is also pitched as being quite different.

The Pro here is short for professional and in audio terms, it is supposed to be targeting the professional audio guy, the studio producer, or the reference mixer. More so, the D8000 Pro is being pitched as a result of direct feedback from this particular Pro community.

Whilst the D8000 Pro pitch is different the underlying technology framework remains unchanged. That means the use of AFDS or the Air Film Damping System for the configuration of the same driver from the D8000.

This is a diaphragm design Final are pitching as enabling zero contact with the surrounding magnet system when active. Final claims this contact-free response enhances bass purity at a much higher level than conventional planar magnetic designs.

Final state that in conventional designs low amplitude responses tend to expand the diaphragm in such a way as to regularly come into contact with the magnets. This increases the level of distortion and ‘warping’ the frequency response at the lowest level.

The use of air film between the magnets acts like an air buffer and cushions the diaphragm in such a way as to reduce the level of contact with the magnets. This reduced contact produces a more even and coherent bass response as a result.

Final have strengthened the air film of AFDS with the D8000 Pro, which in turn stiffens the diaphragm. When the diaphragm is more suppressed or stiffened, the lower frequencies become slightly more controlled and leads to better high-frequency performances.

Indeed, our initial impressions would confirm the treble response is quite different on the Pro and you can find out more on that in the initial sound impressions below.

The 50mm driver is the same core driver from the original D8000. I actually find this driver to be a bit on the small side compared to the likes of the LCD-4 from Audeze but it never sounded ‘small’ if that makes sense.

As per my previous D8000 review, I am presuming the diameter spec is the moving part of the driver and not the cup opening since the driver housing is much bigger than 50mm.

That also means the specs are unchanged at 98dB and 60Ω which means it is not terribly hard to drive though it should scale quite well. It also means both will match quite well for current demand, meaning similar volume level requirements. 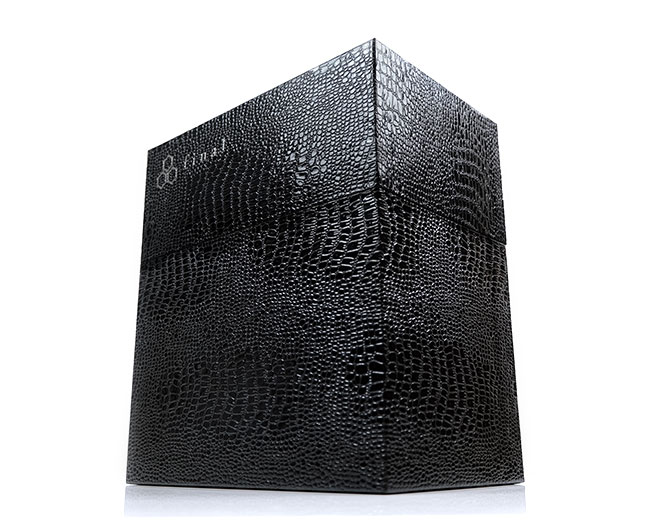 The D8000 Pro comes in the exact same faux croc skinned cardboard box as the original D8000. The protection levels given to this box with two outer levels or layered cardboard courier box is satisfying though it does mean the shipped package is fairly bulky.

Thank you so much to Final, however, for not encasing the headphones in layer upon layer of intricate cardboard panels and locks that ate up my time with the D8000. That was a huge waste of packaging for me and took around 30 mins to get the headphones out.

This time, the unboxing is fast and much more environmentally friendly. However, there are one or two little “gotcha’s” like the sealed plastic wraps on the cable terminations that require a sharp knife to get off.

One of the reasons for the simplified unboxing is the inclusion of a very nice carry case for the D8000 Pro as opposed to a metal stand for the D8000. I am guessing this in line with their audio pro target market and the need for them to carry them around a bit more.

This is by no means a cheap case with some excellent nylon contoured cloth finishing on the outside and a thin velvet layer on the inside. The zip mechanism and grasp also have a nice rubbery finish to them and look very durable and grippy.

Inside the headphones are held there with a single elasticated strap with a velcro and velvet half-circle tall soft pouch to carry a cable. I say a single cable here because you get 2 cables with the D8000 Pro. The only problem is, the pouch is not big enough to carry both. It can barely handle the smaller 3.5mm portable cable never mind the bigger 6.35mm terminated alternative. 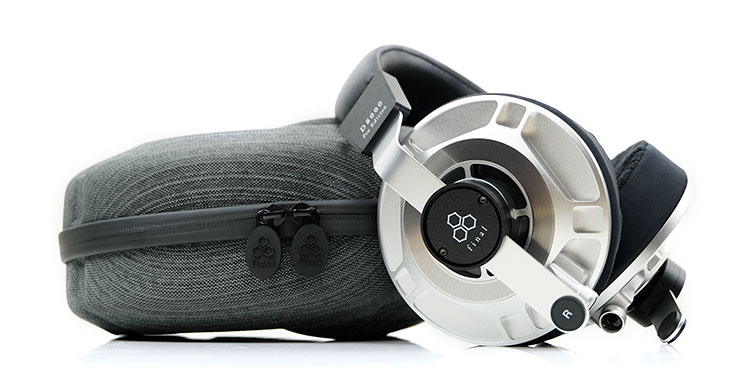 The D8000 Pro comes in either silver or black and this one is the silver edition. The basic frame and materials used on the D8000 Pro remain the same, however. That means the same legacy design from the original HP-1 and HP-2 Yamaha models launched in the 1970s.

The elongated headband with its slightly arched curve to allow for the cups to swivel is one such feature. However, the new Alumite anodized aluminum finish or ‘silver’ is a departure from the Yamaha vibe which only came in black, leather, and green. The cups are of course much bigger than the original on-ear design of the HP-1 and the coating is a little more advanced.

You might also notice in the pictures that Final use a similar “blotchy” resin finish on the plastic parts as the original D8000. Final claim that this coating improves resistance to vibrations on the D8000.

The rest of the materials in the D8000 Pro design include a tasteful mix of magnesium alloy for the inner cup rings and headband adjuster, padded protein leather for the headband strap, and hard resin coated plastics for the headband blocks and cup plates.

The angular elongated 3.5mm dual entry connectors can be found at the base and are formed from the same exterior plastic cup moldings. 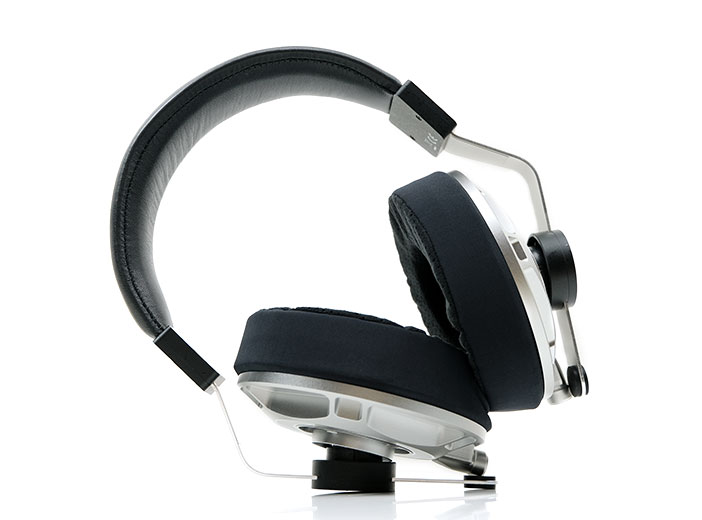 Now my biggest gripe on the original D8000 was the fitting. These are heavy headphones at 523g so the lateral support is critical to reduce the inevitable downward or vertical pressure. Final have tweaked the D8000 Pro fitting now and right away you can tell the difference. These are now much more comfortable on the head than the original.

What have they done? Basically, they changed the pads and fattened the cushioning under the main headband. I cannot see any deviation from the sliding headband mechanism on the D8000 so it is the same length but it does feel laterally tighter and comfier on the scalp.

Gone are the old memory foam pads of the D8000 and sorry, but they will not be missed. These had too much ‘give’ on the external lining meaning the foam was prone to moving around a lot. They nearly always ended up uncomfortably pressing down on the top of my ears after long periods. They also did not offer much in terms of lateral support.

The new pads are made from Toray Ultrasuede and are deeper and marginally firmer than the original memory foam cushions. They clamp a hell of a lot better and combined with the thicker cushion under the headband I can clear the top of my ear with minimal issues. They are also quite breathable (venting on the inside) so sweating will not be an issue with the new pads either.

The tighter seal to the head also should mean a better low-end reproduction compared to the original pads. Something we will test in the main review when we compare them in detail. 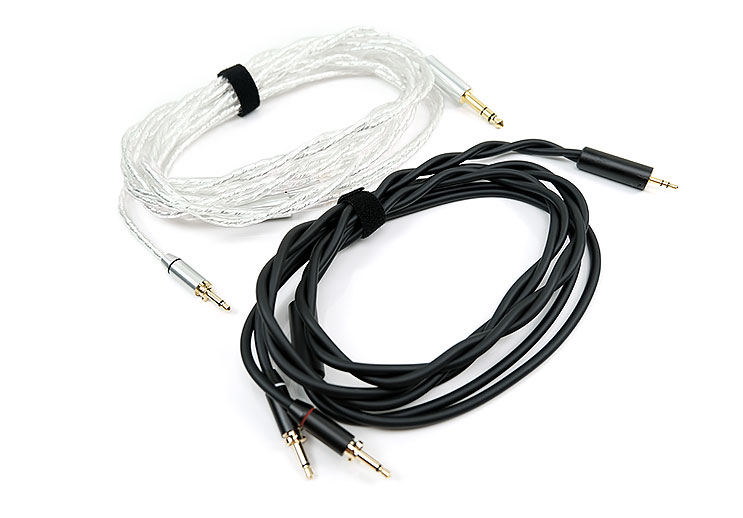 The D8000 comes with two cables of the same wire and gauge. The black rubbery jacket was similar on both with the only differences being the length at 1.5m and 3m and the termination, 3.5mm, and 6.35mm.

The D8000 Pro has a significant change with the 3m cable now an OFC silver coated wire with a translucent jacket. IN fact, Final sell this for $750 alone so a lot of the additional price increase is down to this cable rather than the headphones themselves.

The terminations remain unchanged but the barrels of this cable are finished in silver to match the aesthetic of the wire. The 1.5m cable remains the same as the original which is an OFC with no silver plating and a black rubbering finish.

Both cables are a little on the thick and heavy side but the 3m version visually is a beast. It is bright, super silvery, and matches the cups of the silver D8000 Pro perfectly. For the black version, less so.

My only query? Why no balanced XLR 4-pin for the 3m? That would have been the cherry on the icing so to speak for the reworked long cable. 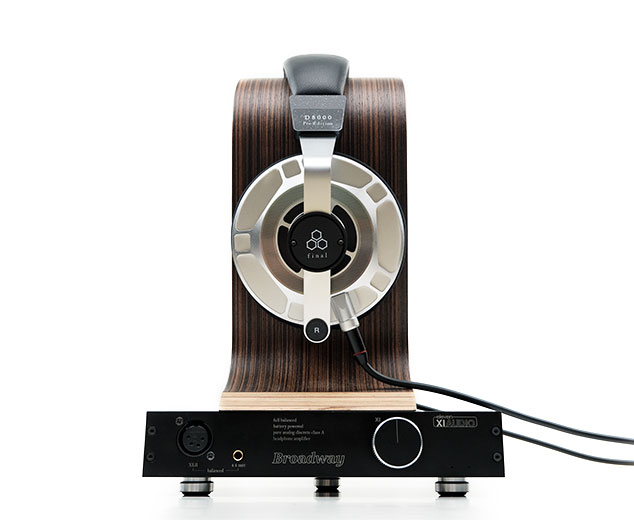 The D8000 Pro and D8000 are much easier to A/B than I thought they might be. The D8000 Pro is more linear, less musical, and reference-like in its tuning with a very coherent performance from top to bottom.

However, that does mean a shade less PRaT and power that the D8000 had by the bucket load. It also means a slightly more neutral vocal positioning on the D8000 Pro whereas the D8000 sounds much further forward.

The Pro tuning is thus more controlled sounding than the original. Your ear is not being tugged to the vocal or low-end as much which, for me, means I am freer to hear other aspects of the presentation. On the flip side, the treble sounds super sweet on the Pro and perfectly tuned with an almost airy but liquid-like overtone.

The transition from mids to treble is so much smoother also. In fact, the treble body is better on the Pro and makes the original D8000 top-end seem edgy and brittle by comparison.

Given this is the same driver and comparing the two I doubt the peaks and troughs in its mids to treble performance have hugely changed. Rather, it seems the dB of elevation is a little smoothed out now, hence that coherent performance.

No question these are two different sounding headphones with two different audiences in mind. One is not an upgrade on the other so I would not recommend you upgrade right now if you love that powerful low-end response on the original D8000.

The D8000 Pro is a more reference like but with an improved timbre and more coherent presentation. In a way, the D8000 Pro sounds the more universal of the two headphones and could appeal to a wider audience as a result.

I had thought that this is a nailed-on RAD-0 competitor but I am less sure now given the new tuning. I would say this will be more up the alley for Empyrean and Susvara lovers. We shall see in the main review so stay tuned!