It was great to finally meet Lukasz and Piotr Feliks after all the work Mike has done reviewing their line of desktop headphone tube amps over the last few years.

In case you did not know Feliks is Mike’s favorite amp range by far and has given them awards over the last 2 years on their flagship Euforia and the entry-level Espressivo-E. It would seem to be many head-fi members’ choice of tube amp too because I waited for ages but could not get a seat to test them for myself which was a shame. 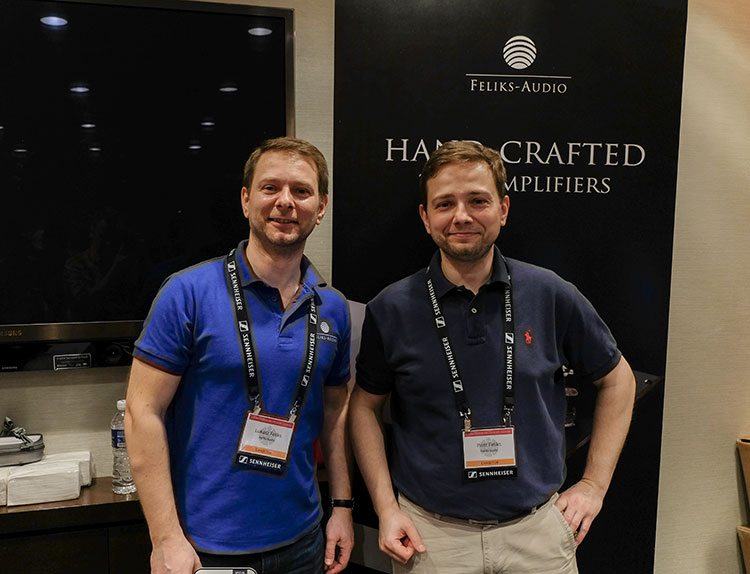 I ended up instead having a chat with the Lukasz and stealing one of his Polish fudge candies they were freely giving away. Tasty stuff!

Lukasz immediately set to work explaining the ethos behind some of their amp designs. The Euforia uses a matched pair of driver tubes PsVane CV-181 Mk2 “Gold” /or PsVane “Silver” and matched 6N13S (NOS) power tubes.

The Espressivo-E had a recent upgrade to the Mark II since Mike reviewed it. This now uses upgraded 6N30 power tubes and a 6922 drivers combo from the Mark 1 6N1P/6N6P variants.

The Euforia, from Mike’s comments, is a very neutral and speedy sounding amp, quite the opposite of the typical SET presentation. One particular note I dwelled on was clarity and an uncolored sound.

The Espressivo-E was generally described as being more musical with a fuller low-end, not as resolving, and more of a typical SET sound which Mike thought was just brilliant for the sub-$500 price.

Joe and the team from Advanced were in Ocean 9 under the Zepplin & Co banner and though I did not get a chance to try out their gear 1-2-1 we do have an Advanced Alpha planar review due out next week on the website that should be worth reading. 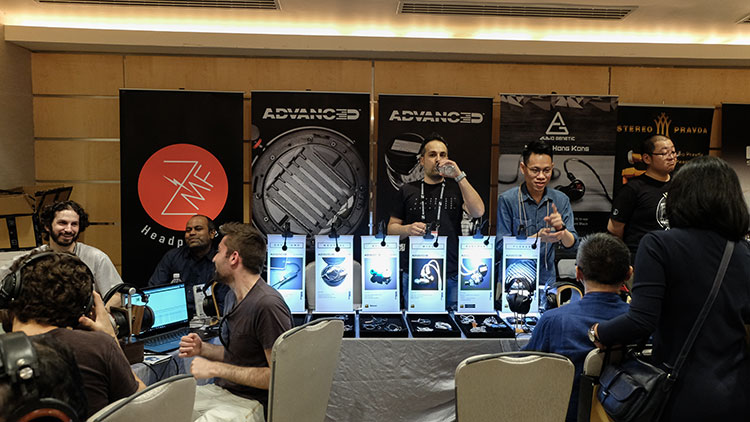 In short, I don’t agree with Tyll’s assessment of the hard mids sound and sharp vocal presence on the Alpha. Yes, there is a bump but the overall presentation gets a lot smoother and more engaging when you give it some decent power from a good amp. Underpower it and like any other demanding headphones, it often skews the sound poorly and that is when it gets edgy.

At $499 I think they are a good deal for a planar headphone though I would prefer to see a better cable boxed with it. The current one is not ideal for desktop use. Whilst they are not at the HE560 level they do perform well from good tube amps and even better from Class A flagships such as the Xi Audio Formula S. The key for me is in the matching of the source, amp, and headphone.

Surprise, surprise, Zach Mehrbach was there in person. Situated right beside Feliks Audio he had his latest and greatest Auteur and Eikon models on display. They seem joined at the hip with Feliks because I could not get to personally test them due to the lengthy queues. 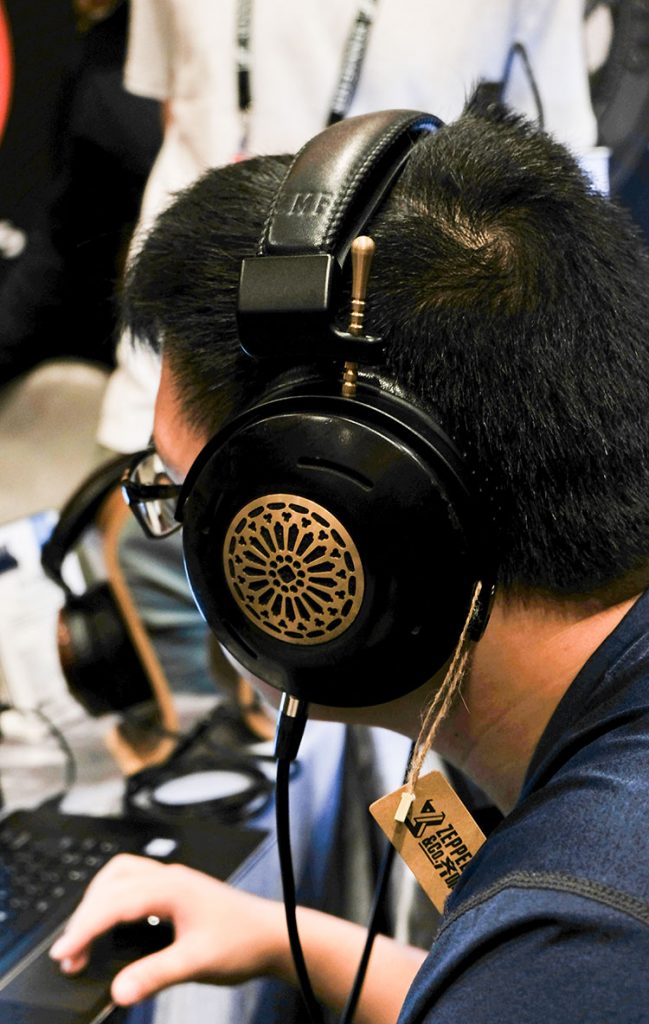 They were, in fact, being used in heavy rotation with Feliks Audio’s tube amps, and judging by Mike’s praise of Auteur and Feliks Audio tube amp combos this seemed a smart move to place them side by side.

Physically they look beautiful, perhaps Zach’s most intricated builds to date, and from the feedback, they certainly seemed comfortable despite their generally large circumaural design. Maybe in due course, I will get another chance to try them out in Shanghai later in the year but for now, here is a link to Mike’s review of the Auteur and Eikon for more information and sound impressions.

Japanese headphone specialist KuraDa was set up right beside MrSpeakers and it was the KD-P1 I wanted to try the most. I do not know a huge amount about their background but the design of the KD-P1 did catch my eye a while back so I went straight for this to test out.

The KD-P1 was hooked to an impressive black finished Schiit Audio Ragnorok amp and Yggdrasil DAC with a MacBook transport. To be honest it looks very exotic and quite different to anything else I saw at the show headphone-wise. It is also priced over $4000 so this is very much summit-fi gear.

I am told they are handmade and they do look very sturdy indeed weighing in at 550g. My head is a bit small for the shortest headband fitting so I did feel it hang down a little from the weight. 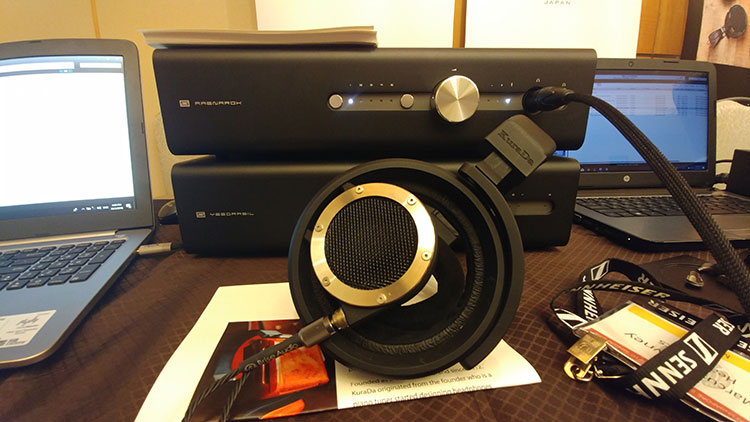 If you are coming from an AKG K1000 or any of those speaker-type headphones the KD-P1 works on the same basis. This is a completely open design with zero seal. The driver housing sits a bit back from your ear also projecting a near field sound wave onto rather than directly into your ear.

I have something similar to this but not at the same level as the odd-shaped Sony PFR-V1 and it is a whole new listening experience from regular cans. You do, however, need a very quiet listening room and I did not get that at CanJam naturally.

What I heard from the KD-P1 is a huge open soundstage, incredible top-end extension, and some very accurate and neutral-sounding instrumental timbre. The bass response might be a bit light though.

This was very much like a near-field quality speaker experience rather than a headphone presentation. The use of the Schiit TOTL amp and DAC setup was a wise choice as beside it was a mid-fi Oppo HA-1 which I do not think sounded as good paired with the KD-P1.

This is a brand I have heard a lot about and read some reviews also but until CanJam had not personally heard myself. None other than Martin Roberts, the Managing Director of Sonoma was managing the booth which meant I got quite a detailed explanation of the M1 system.

And it is a system, by the way, priced around $5000. But with that price, you do get an amp, headphones, and DAC. You do need the DAC/Energizer unit to power and send a signal to the M1 headphones and you cannot use either in combination with any other electrostatic systems due primarily to the whopping 1350 dc volt bias output and proprietary headphone connector.

Normal stats headphones work on the traditional Stax 560v pro bias setting which means curtains for your cans if you slot one into the Sonoma Energizer output. Mind you the connectors are different so no real chance of that happening. 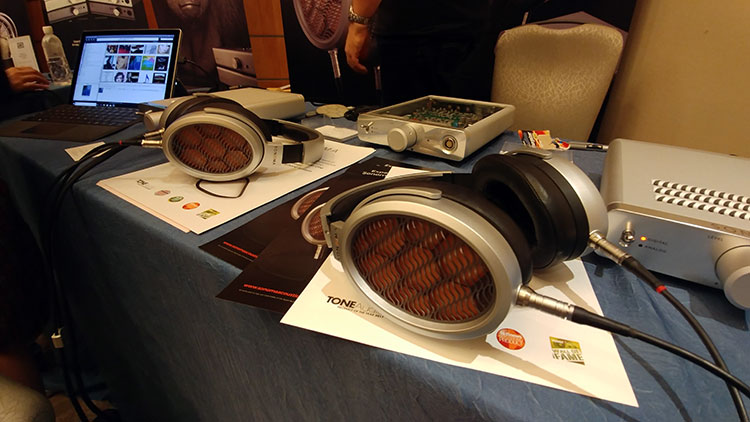 The headphone design kind of reminds me of the new Sennheiser HD660s in form factor but in a light grey tone and a nice orange hue from the stats drivers just underneath the open black faceplate grills. It is also very light at just over 300g yet feels fairly solid in the hand. The pads are very soft using real leather and good depth though the clamp is a little stronger than Stax units or the VOCE. 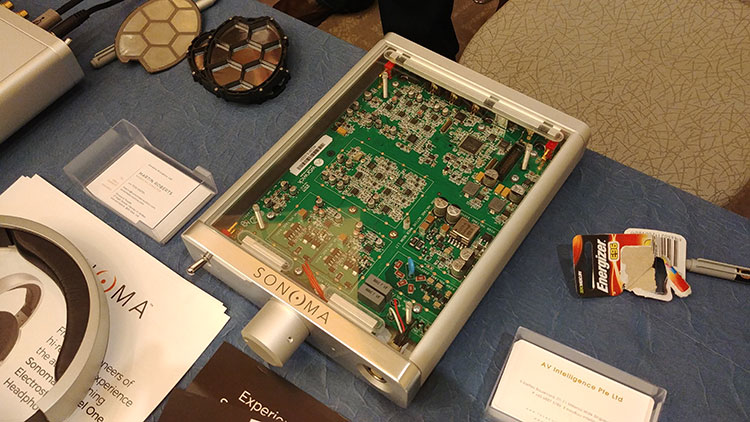 The DAC/AMP on display came in both standard and open glass plate format which Martin used to explain the internal design and components. They are using dual Sabre DAC chips and XMOS USB stages though they did not say from memory which Sabre chips but possibly ES9018 or higher. Decoding is set to S/PDIF up to 24bit/192kHz and USB inputs up to 32bit/384kHz PCM with DSD (DSD64/DSD128) via DoP. 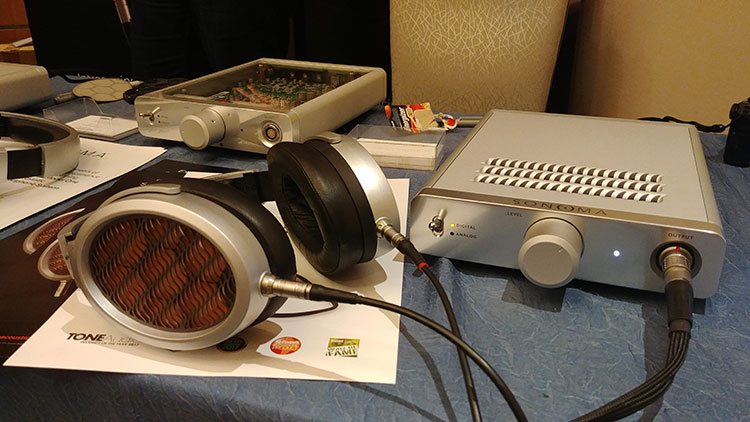 Presentation-wise I heard a balanced sound signature with nothing overly emphasized and an accurate instrumental timbre. I did not hear anything peaky, bright, or rolled-off during my 10 minutes with the M1. However, I did not get a sense it could reach as deep or deliver as much bass weight as the VOCE could.

The M1 seemed to excel on instrumental work and accurate reproduction in terms of imaging and generally sounded very coherent. This is another flavor to add to the widening electrostatics market and perhaps one of the better “true to life” presentations when compared to the sometimes fatiguing Stax 009.

Another stop of the day was Hifiman, or more specifically a roundtable with Andy Regan, the Director of Sales & Marketing since 2017. Andy has a long history in the audio business spanning the likes of JH Harvey, Cardas, and Monster. I missed him on day 1, things were pretty hectic at the time but did manage to catch up with him on Day 2 over coffee with Dan Clarke and Rob Watts.

Andy has a ton of interesting stories I can tell ya. Not in the sort of ‘matter of fact’ stories but more of a storyline that blows up into something that has everyone sucked in. Sort of reminds me of a Billy Connolly-style dialog. The man is also 2nd gen Irish, and me being true blood I can relate to his style a lot. It is good that he does know a bit about how we all think and say back in the homeland. Looking forward to the next coffee and story sessions with Andy.

On the table, he had 3 key products, 2 of which are ready to go and the other is still in development. The first was the Sundara which sort of replaces the HE400i and maybe encroaches on the HE560 territory a little. The Sundara is priced at $499.

This is an open-back single-sided full-sized planar magnetic headphone and it is a huge step up in build quality over the older gen HE400i and HE560. I did not think those two were actually that bad in terms of finish. However, the Sundara looks much better and feels sturdier to me.

You do need a desktop amp with decent power to drive it. This is not an efficient headphone unlike the HE400s a few years ago. The show floor is noisy so I suspect more than a few might have wanted somewhere more quiet to demo it. Luckily, I do have a unit in the office we are in the process of burning in for a review so I have a somewhat better idea of what it can do rather than 5 minutes of impressions.

Tonally this is more in the HE560 camp than the older HE400i. This is a neutral, quick-sounding detailed mid-fi headphone with an airy top end, clean treble, and decent headroom. Its staging is big, more than satisfactory actually, and not as intimate as the HE400i.

The second was the very interesting stats Shangri-La Jr priced at $8000 which was connected to the new R2R DAC/DAP which is not ready yet for public release. The Shangri-La Jr is beautiful in my eyes. Very clean lines and a more minimalist look than its bigger brother the Shangri-La. Like Cayin’s HA-300, the Shangri-La Jr uses 300B tubes which are not cheap at all but very much respected.

The accompanying headphone takes their design cues from the Susvara in terms of form factor though the cups lack the wood laminate and seem a little thicker. It is definitely worth a listen with bags of details and a very fast but controlled signature. I am dying to compare this to the VOCE from MrSpeakers and my own Stax 007 MK2.

Our CanJam Report continues on Page 3, click on page 3 below