As I said before the one drawback of the designer tool is the lack of real-world imagery. Naturally, I was a bit cautious if my chosen design would come out as good as the graphical interpretation the designer tool showed me right at the end.

These are not cheap customs, not by a long shot. Thankfully the landed unit was not only consistent with my design choices but it actually turned out to be one of the best-designed customs I have yet to receive.

By the way, I like brown so sorry, that’s just my bag. It is also a very small form factor, smaller than a lot of multi-driver units out there on the market, and certainly much less cumbersome than the Roxanne.

It doesn’t have the instant wow appeal of the Custom Art Harmony 8 design, but it has a beauty and subtlety more in line with the Rhines Stage 5 design.

The translucent brown shell has a really nice level of transparency; neither hiding all the innards nor looking totally washed out and matches that Koa wood faceplate neigh on perfectly.

The enamel coating over the Koa wood is quite thick, thicker than some other wood plate designs I have received before but the shine on the plate actually serves to give the wood grain excellent pop and good contrast under direct lighting.

The 4 bore shell is bubble-free acrylic (non-filled) right the way around, very smooth, and well finished with very little in the way of visible hairline grooves where the plate meets the shell due to that coating. Right at the bottom is the adjustably compliant membrane vent which acts as a small port screw to control the mix of internal and external sounds.

The port is right on the nose of the shell where it meets the faceplate. This particular a12t fixed measurement module and looks to be made of translucent plastic which can slot in and out according to the desired ambiance mix.

64 Audio is also touting this port to be modular in design meaning you can swap it out for different modules in the future for different effects on the sound. Not sure what that could mean yet but it’s unique and might give some longevity to the a12t way beyond some of the other competing units with switches and similar touches.

The port also acts as an adjustable secondary eardrum for filtering out the pneumatic pressure using the ADEL technology and leaving just the sound pressure going into your ear. It is relatively easy to pull out or slide back in from the rest of the shell so I presume modules can be simply purchased as and when needs and then swapped.

I felt the audiologist this time around was more focused on producing good impressions and so it was with the fit of the resulting A12t from those impressions. These are deep, tight, and excellent sealing CIEMs.

The acrylic is smooth and the molds are accurate even in my rather odd-shaped left ear canal. Even prolonged open-jaw stances had a 99% seal which is impressive for a CIEM primarily molded with relaxed jaw sealing. I highly doubt my jaw is going to be open during long listening periods but it just goes to show a good impression and an accurate designer is a must.

I would rate these as just slightly in behind M-Fidelity and Custom Arts awesome silicone injected and pure silicone molds which retail a 100% seal open or closed.

They are more comfortable than the Stage 5 from Rhines and deeper than the flagship acrylic VE6X from Vision Ears. I still think the SA-43 from M-Fidelity was the best combination in terms of comfort, depth, and seal out of those I mentioned but for pure acrylic, the A12t is not far behind.

Of course, the beauty of the A12t unlike the other CIEM’s mentioned is that you can adjust that ambient noise to your liking with their variable modules. This means you can have a rock-solid seal or something a bit more open, making the A12t that bit more flexible than the competitors. 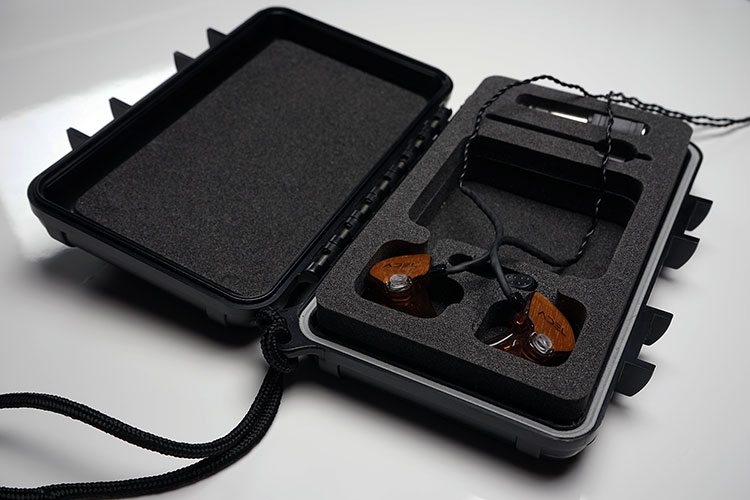 The ADEL A12t comes with the standard stock custom IEM cable. I have a growing farm of these now and such is the plethora of super soft pliant 2 pin custom cables being offered I have come to the conclusion this is by universal decree and thus globally a mandatory inclusion.

The stock cable is the same as any other cable on a CIEM in the known universe and beyond – at least visually. It is soft, easy to manipulate behind your ear, terminated with a 3.5mm gold plated right angle jack with decent strain relief. There is nothing bad about it but nothing unique about it either.

Thankfully it is detachable as most others are and as such, I would advise you to go out there and grab a great aftermarket Twag or SXC type cable because in the IEM world they do make a difference.

On the plus side, the ADEL A12t carry-case rocks and second only to Vision Ears for size, form, and function. It more or less a converted Otter Box so it’s next to indestructible and well protected from the elements.

On the outside, you get a small amount of personalization with a silver label which you can choose in the designer tool before you order. This one has Headfonics on the label naturally.

Inside the foam is cut rather elaborately to house the A12t, the cable, a quarter jack adapter, and a cleaning brush. It’s a nice layout and very photogenic indeed. Functionally everything is held in place when closed also with no unnecessary movement.

The A12t is fairly balanced with a neutral to warm tonality that is smooth, airy, yet very detailed and wonderfully musical from top to bottom.

64 Audio has cleverly dialed back the top end just a tiny bit in comparison to the likes of the super clean and slightly brighter Vision Ears VE6X to allow the detail to shine but make it sound incredibly natural and flowing.

The A12t’s bass response is weighted and full sounding with decent pace though not as snappy and tight as the VE6X but I personally think it has better texture and detail. It’s a strong point of the A12t for modern genres such as rock and pop which need a little bit of oomph down below.

It’s not a slamming bass, it does not have a huge midbass hump, but rather oodles of extension and a nice full beefy sound that has plenty of authority. Think LCD-3 rather than HD800 or Hifiman HE560 and you get a great idea of the type of bass response with the ADEL A12t.

The A12t also has a very open and spacious presentation allowing the midrange to breathe and sound very clear and prominent. Layering is excellent and the vocal presence, whilst not as big sounding as the Harmony 8, has far superior control and texture.

There is not one iota of sibilance or harshness on the A12t in the upper midrange. Unless you throw in a ton of crappy recordings with existing sibilance you just won’t hear it.

Yes they dialed the treble back just a tiny bit, it’s not as brash and forward as the VE6X from Vision Ears but it extends as smoothly as the Stage 5 from Rhines and outshines the W300AR, Harmony 8, UM Merlin, and their own V8 in terms of resolution, detail, and evenness. It’s got plenty of headroom and just enough shimmer to sound accurate and pleasingly articulate.

There is zero peaking in the lower treble yet cymbal and percussion sound clear and present. That is a rare quality indeed and something I rarely find in many an IEM or CIEM. It’s usually sucked out or tapered down sounding a bit lifeless or too peaky and hot and sounding distracting and tiresome. The A12t managed to avoid both pitfalls with apparent ease. 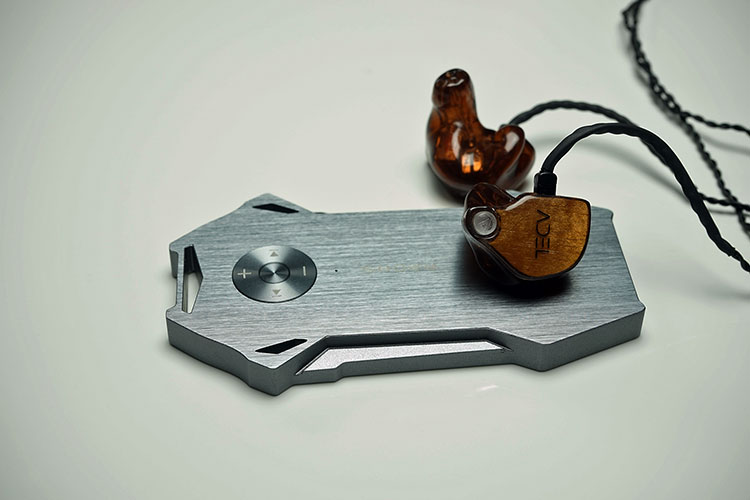 This is like taking candy from kids it is insanely easy to drive on just about every portable format I have. Some of that is down to the ADEL technology allowing it to sound louder at lower volumes but it’s also a very efficient earphone at 16ohms and 117db.

It’s one of the few earphones I have that the stock volume memory setting on the Glove A1 amp is a bit too loud. Roughly 4-6 steps down on the Glove A1 makes it just about right for long-term listening.

It has no issues either jacking straight out of all the DAPs I tried including the DX90, FiiO X3/5, Lotoo Paw Gold, and the Shozy Alien.

Interestingly I was expecting a ton of noise and hiss with the Alien but it stayed much lower than I expected. It’s not noise-free, DAPs such as the Paw Gold and the DX90 have a much lower noise level but in full swing, it sounded gloriously natural and full with the Alien.

Matching wise the Paw Gold had excellent detail and control with a slightly warm tilt to the signature with the ADEL A12t whereas the revised X5 went slightly in the opposite direction with a much more neutral flavor albeit slightly less resolving.

I enjoyed the micro gain control on the DX90 which is up there with the Paw Gold for volume adjustments and something I highly recommend for the highly sensitive A12t.

Though you can survive without them, portable amps added some interesting characteristics when paired with the A12t. Just do not go too far up in the impedance and power equation as noise tends to creep in rather quickly.

It goes without saying both the RX from ALO Audio and the Picollo from Cypher Labs had no problems coping with the A12t high-efficiency levels with my preference this time veering to the RX’s bigger soundstage and dynamics over the smoother fuller Piccolo. The added power of the Picollo is not really needed here.

The CEntrance Glove A1 paired with the AK120 had great noise levels with a nice smooth if slightly soft signature. Cypher Labs’s cracking Duet analog amp tightened things up a little over the smoother Glove A1 and sounded very comfortable on low or mid-gain with no noticeable noise issues. 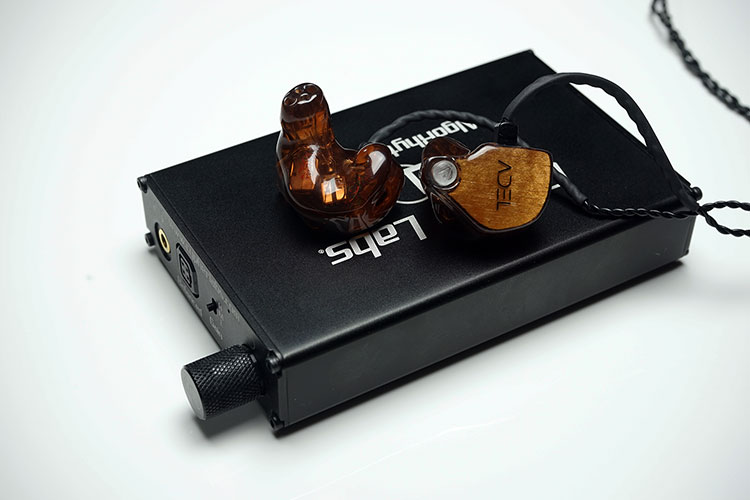 Even the budget 02 matched very well with the A12t sounding clean, and clear on challenging vocals such as Agnes Obel’s Philharmonics though slightly lacking in the fullness and dynamics of the other two more resolving amps.

Sometimes too easy to drive is limiting also and some great amps lost out due to high levels of noise or lack of gain control with the ADEL A12t. I won’t go into the Theorem 720 this time, it’s not a CIEM friendly amp at this level of sensitivity and I have delved into it so many times it’s starting to feel like Groundhog Day. Suffice to say it has noise.

The dynamics and extension on the voltage out of the Bakoon HP-01M were incredible (once you get past the chronic imbalance at low volume levels) but sadly the power on this portable powerhouse was a bit too much and noise levels were disturbingly high during quieter listening sessions.

Another one to have slight noise issues was the Sony PHA-1 though not by quite a wide a margin as the Bakoon it was still noticeable when paired with the DX90 on high gain. The Sony does not have the strongest analog section to it but on the low-gain line out with the DX90, it had no issues driving the ADEL A12t.

So long as you do not push the Sony past noon on the gain pot the noise will not be noticeable. Oh and avoid the awful pop on the PHA-1 by plugging in your A12t after you turn it on, it’s rather jarring.