The 64 Audio A12t is a 12 BA driver custom monitor featuring a unique sound pressure system called ADEL (now changed to apex). It is priced at $1999.

Disclaimer: The 64 Audio A12t sent to us is a sample in exchange for our honest opinion in this review. We thank the team at 64 Audio for giving us this opportunity.

Note, this 3-page review follows our new scoring guidelines for 2021 which you can read up on here.

The reviewer’s mortal enemy, the killjoy of audiophiles, and the ticking clock of old Father Time. That’s the gradual loss of your hearing; it is as inevitable as death and taxes. However, the premature loss of hearing and the dreaded tinnitus is preventable.

This is not a Gen Z phenomenon with the boom of headphones and audio in recent years, this is an ever-present danger. It seeps into everything from 139db concert checks by Manowar in 1998 to the coast guard being called in due to noise pollution in 1968 by a band called Blue Cheer. Yes, that is right, the coast guard.

Noise is addictive, it’s energetic and frankly quite sexy in the right hands. I went to a string of concerts in the late ’80s and sat right in front of speakers to Maiden, Megadeth, and Queensryche and thought nothing of it until the ringing stopped 3 days later.

That’s youth for you. Ignorance is not bliss in the long run and you can’t get it back unless your next trip for ear impressions is for a hearing aid kit.

Everything these days in the headphone world is mooted as ‘extreme bass’, lower distortion no matter what volume, and just about anyone I know who has a gadget in Euroland moans about the legal volume limiter placed on most audio generating PMPs and DAPs.

Very few, if anyone is talking up the concept of creating a sound that is “healthier” to your ears and at a high-end pitch for that matter. This is why I am excited about the new ADEL range from 64 Audio, (formerly 1964EARS).

This is an IEM sound system that is specifically designed to minimize hearing loss without the old adage of “quieter is better”. According to 1964ADEL, regular IEMS at loud volumes are 77% more likely to cause harm without such a system as ADEL to protect you.

If you listen to high-end customs every day like me then you have to be interested in this pitch and certainly, I was not going to miss the opportunity to see if this is really the case.

How Does ADEL Work?

In a nutshell, 64 Audio has utilized a technology called ADEL (Ambrose Diaphonic Ear Lens) which acts to filter pneumatic pressure from sound pressure before it ever reaches the more sensitive part of your ears, the eardrums. In doing so the theory is that you can enjoy hearing music at a louder level yet lower in overall volume than regular CIEM or IEM designs.

Pneumatic pressure is basically compressed air thrown down your air from a speaker-type setup such as an IEM and it hits your eardrum activating what is called “the acoustic reflex” of your ear which protects you from perceived loud sounds.

Sustained activation of the acoustic reflex from conventional IEM pneumatic pressure leads to the belief that sound quality degrades as well as your reflex capability leading to permanent ear damage.

Not only are they bringing in a whole new “healthier” approach to sound delivery 64 Audio decided also to take the idea to the masses and launched a Kickstarter campaign to crowdfund the whole project from the ground up last year.

That went very well indeed with around $650k raised for the ADEL technology and the resulting product range that come out of this campaign. This is not just flagship custom territory, 64 Audio is doing the full gamut of IEMs both universal (U-Series) and custom (A-Series) made from a few hundred bucks or less right up to the $2k flagship A12t.

At the time of writing their current 1964 Ears V-Range is still selling but I am expecting the whole new A-Series range to gradually replace the V-Series Range.

The new ADEL range is divided into 4 areas; the Ambient IEM series, the Control in-ear buds series, the ADEL U series, and the ADEL A series. The numbering sequence for the U and A series is a bit of a giveaway with the U going from 2 to 12 drivers at the top end in a universal fitting and the A-series having the same range but in a custom fit.

The U line is also a universal version of the A-Series line in terms of drivers and sound signature but fitted with an option of universal fit tips for different ear sizes.

The A12t is the flagship of the entire range and retails for $1999.00 which is a heck of a chunk of hard-earned moolah but slightly cheaper than the Roxanne and Layla from JH Harvey and the VE6 XControl from Vision Ears also.

The A12t is also stuffed to the gills with a 12 driver BA design; 4 for the lows, 4 for the mids, and 4 for the highs as well as the  ADEL tech. Now the ambient and bass control is nothing new in terms of pitch.

We have seen various bass and ambiance controls before but it’s combined with ADEL that is the unique pitch. In theory, the A12t should be much easier to sound good at lower levels compared to other multi-driver monsters such as the Harmony 8 and the VE6x.

If you hark back to my 1964EARS V8 review in 2014 you will remember I raved on how great the IEM designer was and how far advanced it is compared to other competing sites.

Well, one year on and many customs reviews later it is still the best automated CIEM design tool on the internet bar none. To be frank I have been ordering ‘off the menu’ with most of the CIEM reviews I have done in the last 12 months.

From viewing Facebook galleries to discussions with the manufacturers themselves it has all been very much a 1-2-1 consultation. I like that, it a personal service after all. However, for just sheer impulse buying and tweaking the designer tool on the 1964ears website, this is very addictive.

I quickly agreed with the guys at 64 Audio that once again I will ride fearlessly into the designer and whatever comes out will be my choice for the A12t design. 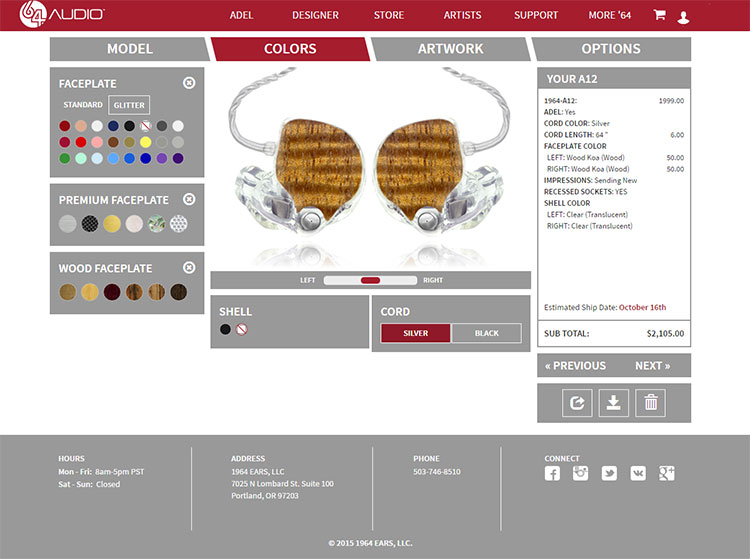 The designer tool pretty much lets you tweak any and all aspects of your CIEM with a flick of a UI switch or a pressing of a keyboard button.

From here you can choose your model such as the A12t, the design in terms of shell color and faceplate, the artwork, whether unique or pre-formatted, and then finally select a set of accessories from chord to a customized case that you want your A12t to come packaged in.

Right at the end you can select your delivery options and pay for them with a click of a button. I have heard this called a factory template but I think it’s more than that and really allows 64 Audio to pitch and sell 24/7 in a confident manner.

For the A12t I really wanted to go with a light wood and amber type design. Now I will admit I cheated a little for inspiration and had a look at their gallery on the 64 Audio Facebook to compare reality with graphical interpretation and if there is one thing I would love to see in the designer is a little bit of that portfolio in the corner to show how it is all comes to life.

I choose a brown translucent shell and Koa wood faceplate for the overall look and feel with a simple laser-etched ADEL logo on each earpiece. I am not hugely into personal designs, more of a subtle color combination guy but you can go extreme if you like with prints and designs by just uploading the image of your desired graphics and the 64 Audio team will do the rest.

Just one important thing to note the design process is slightly gimped right now with just black and clear shells due to the recent introduction of 3D printing in their molding process, but the good news is, you can choose from a variety of colored faceplate choices to give a very cool two-tone look to your custom IEM’s.

Once the order is complete you are given an account set up with updates all the way to delivery via the courier of your choice. Turnaround time is consistent with last year sitting at 4 to 5 weeks with 1-2 days for FedEx to get it to your door.

Nothing new here from the last time with 64 Audio but this time I changed from open to closed or relaxed jaw impressions which of late has been serving me pretty well with tight seals and great isolation.

You can, of course, try open-jaw clay impressions which might be a bit more relaxed overall but unless the customs company is very specific I would opt with closed. There is nothing worse than getting a set where the seal gets broken with a slightly loose fitting and having to send them back.

Click on page 2 below for the design and sound impressions