What Is Jitter in Audio?

You hear this term jitter quite a lot in audiophile discussions, particularly with reference to digital audio conversions or DACs. Yuri ends the year with a more detailed explanation of what jitter actually is, measured, and suppressed in audio components.

This article was reproduced from the educational archives of Yuri’s Sample Rate Converter website with his kind permissions. All copyright belongs to said website and any reproduction of this information below can only be done with the express permission of Yuri Korzunov.

Jitter is the time distortions of recording/playback of a digital audio signal. Many audiophile digital audio system owners worries about jitter. Below we will discuss why jitter exists, who it is estimated, and suppressed.

Digital-analog converters (DAC) transform sample sequences (digital values) to analog voltage level sequences. In the ideal case, the same time distance between the samples should be provided. The distance is defined by what we call clocking. However, clocking in not ideal and the restored signal is distorted like it is shown in the picture. 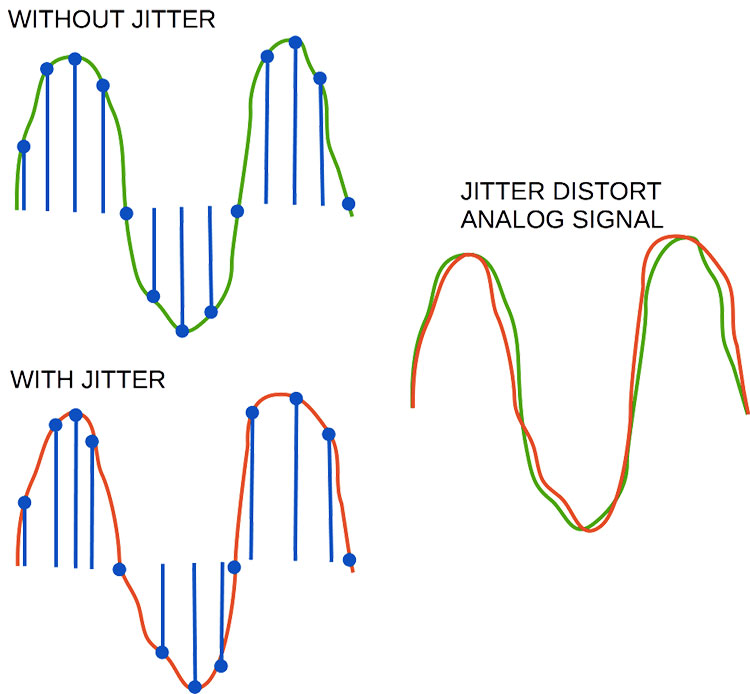 The samples (vertical lines with a dot) have unstable time position (jitter) on the horizontal axis. Thus the restored signal is distorted. We can see this distortion in the right part of the picture.

How does jitter appear?

Jitter is a sample clock issue (clock deviation). Jitter appears in a moment when the electrical digital signal inline (wires) is transformed into a binary sequence. 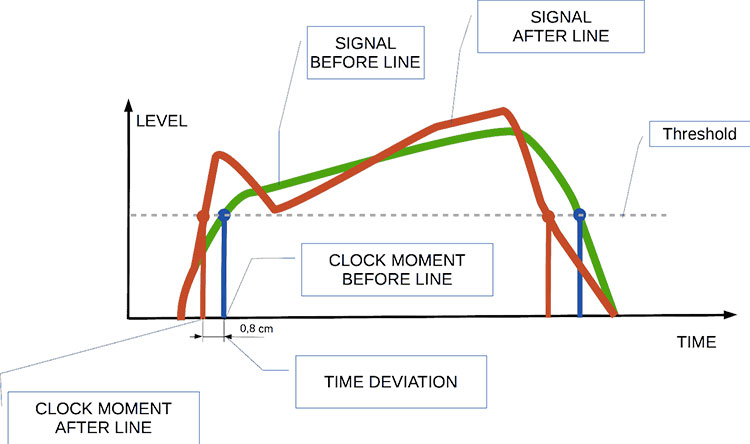 To transmit music data through a line (cable), a digital bit sequence is converted to electrical form. Coding in the electrical form may be implemented in different ways (voltage level values or other).

The line transmitter generates a signal close to the square. In the line signal “lose” of form occurs due to noise, frequency, and non-linear distortions. Thus clock reference moments, detecting in the line receiver, may be offset from their initial time position (time deviation at the picture).

Below we will consider where the jitter penetrates into the audio system.

How to measure jitter

Jitter is a non-linear distortion. To measure jitter need put pure sine to the input of a known system.

Scheme of the jitter measurement

At the system output, we check artifacts (harmonics) and noise.

Jitter products (artifacts and noise) depends on the input signal. To check the dependency we can take a spectrum analysis of different input signal level and frequencies.

The picture is not a real spectrum. It is only an illustration for better understanding.

Measurements #2 and #3 allow us to identify separate errors within individual system parts.

Latency is a delay for processing inside an audio device (read below about a FIFO buffer).

What are the reasons for jitter?

Above we considered, that clock deviation is an effect of digital signal distortions.

There are several factors that impact on clock deviation:

Clock generators have electronic elements, that define the frequency and its deviation. Changing the power DC voltage can cause frequency deviations of the clock generator. Power supply units can generate noise into electrical lines. This noise can modulate the generated clock impulses.

Noise, that impact on the digital audio signal line, penetrates from electrical circuits and the air.

Unfortunately, jitter is not a pure DAC issue. When we use recorded stuff, we already have a jittered sequence of digital samples.

To understand jitter issues fully we need to learn more about the full recording-playback system.

Capturing of music is the periodical measurement of an analog signal. If the periods will vary, it causes time distortions in recorded audio samples.

Jitter in an audio recording. Let’s compare capturing with jitter and without 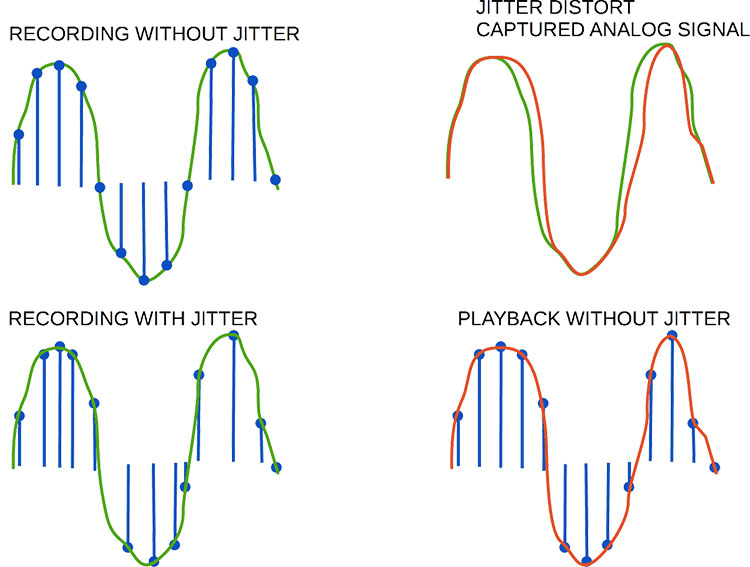 In the upper left part of the picture, the signal is captured without jitter.

In the lower-left part of the picture, the signal captured with jitter.

We can see that samples for both of these cases have different values. I.e. after restoration to analog form (playback) signal, captured with and without jitter, they have different waveforms of the analog signal.

If music was recorded with jitter errors we can’t compensate it further. Because the jitter is random. As a rule, in a recording studio, we use professional apparatus, including dedicated clock sources, (a Word Clock as an example). Therefore, engineers in the studios aim for a maximum decrease in losses with the best possible clocking devices.

The digital domain between ADC and DAC

When a signal is placed into the digital domain (signal in digital form) jitter does not matter. Because time scores for binary signal form have pure mathematical values with infinite precision. Any delays in processing between samples do not matter for a restored signal.

However, processing delays in the digital domain can cause real-time interruptions of the data stream that feeds the DAC. But it is not a jitter issue. Read the details below.

Noise, that cause jitter, penetrate to digital signal several ways from:

However, FIFO buffers provide “jitter isolation” between any “jittered” segment.

FIFO (“first input, first output”) kind of buffer (array of number samples) samples out from the buffer on a ‘first-come-first-served’ basis.

Putting and getting samples to/from the buffer are asynchronous. Clocks of buffer writing and reading are independent. A FIFO buffer causes a time delay between sample input and output (latency). Latency is measured in the seconds, milliseconds, microseconds. 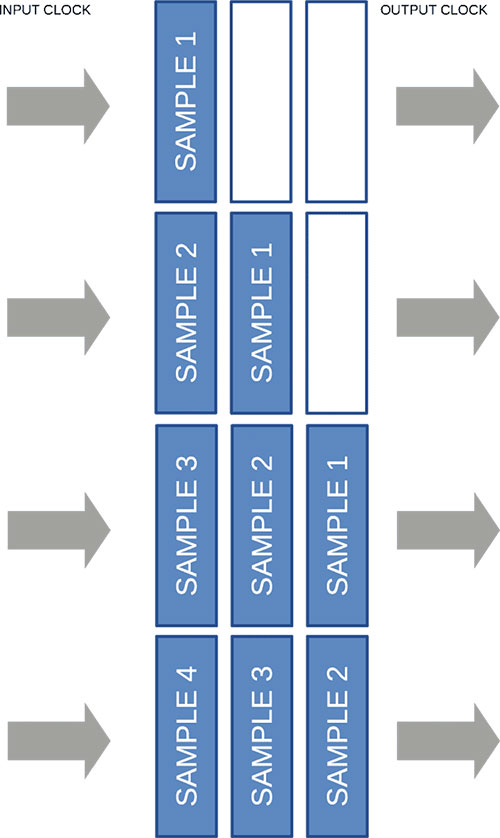 Jitter before a FIFO-buffer does not impact the clock after FIFO because the buffer is asynchronous. Therefore, there are no reasons to worry about jitter before FIFO into the DAC at the scheme in the picture above.

For an audio system, before suggesting effective jitter suppression methods, it is better to learn the scheme of the improved system.

In most cases, asynchronous FIFO buffer corrects interruptions in a binary data stream. Of course, significant interruptions can’t be fixed by FIFO. The non-fixed interruptions cause pauses, clicks, or other sound damages. It happens when the buffer is empty and no binary data is ready for conversion to analog form.

Below we consider cases for a DAC with internal FIFO of input audio data.

Synchronization by the digital interface has jitter sources:

For home applications, I’d recommend using a DAC’s internal clock generator as the simplest way. It may be chosen in the DAC’s settings.

However, it does not guarantee the best result. Each setup should be analyzed (measured) to choose the minimal jitter configuration.