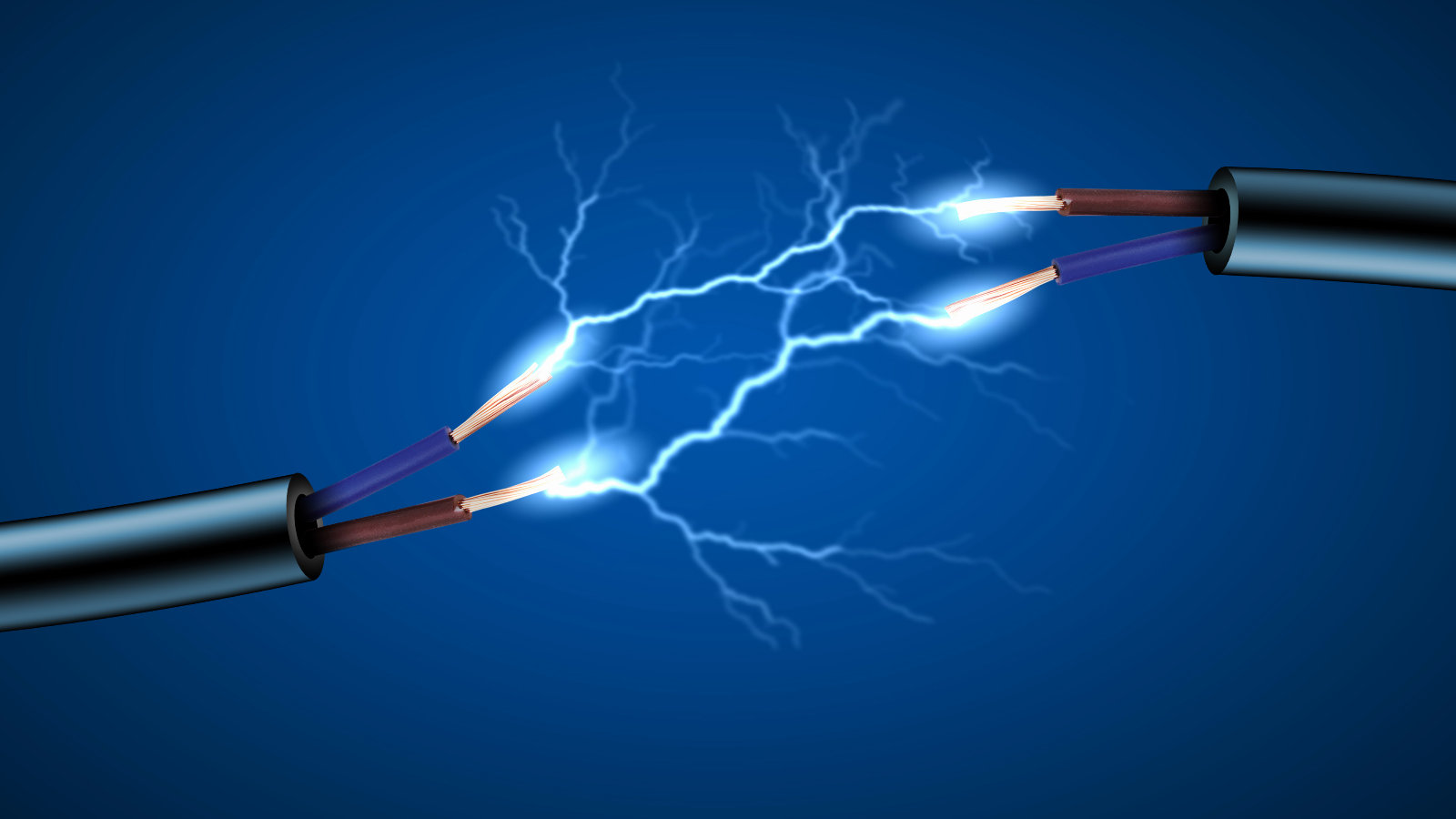 This is the first in what I hope will be an education series of features on the basics of audio from our guest writer, Yuri. Today’s topic is really the building blocks of audio and that is all about audio physics. Basically what drives all our audio gear to work and create sound.

Yuri is an automation engineer with a specialism in telemechanics and communications. He has also worked his way up from engineer rank to a team lead in a radio communication branch over the course of the last 17 years. In 2007 he founded the Audiophile Inventory project which is an audio conversion software since 2009 which you can try for free online at http://samplerateconverter.com.

Please note these articles are currently available on Yuri’s website and he has very kindly agreed to allow us to republish them for you guys to digest on Headfonics.

These articles will introduce you to the fundamental electrical theories that underpin how audio generally functions in relation to the gear we use such as amp, cables, and headphones. These bases are just for the understanding of electrical schemes and their related properties. Digital signal processing or DSP is also based on physics of electricity.

An in-depth discussion of the physics of electricity is much too complex for web consumption. In this article, we have simplified our points on electrical power and audio physics in general for easier understanding to the newcomer. However, it should be broad enough to not only to explain how electrical schemes work but also provide you the basis for some of the engineering thinking behind designing electronic devices such as amps and also audio software.

Electricity is a field that can move electrons. The field is the difference in voltage levels. The difference creates a “mechanical” force that moves electrons.

Let’s look example that well known to everybody. If a ball is lying on the ground, it has zero voltage. If we lift the ball above the ground, we can consider the difference between the lifted ball and ground one like «voltage». 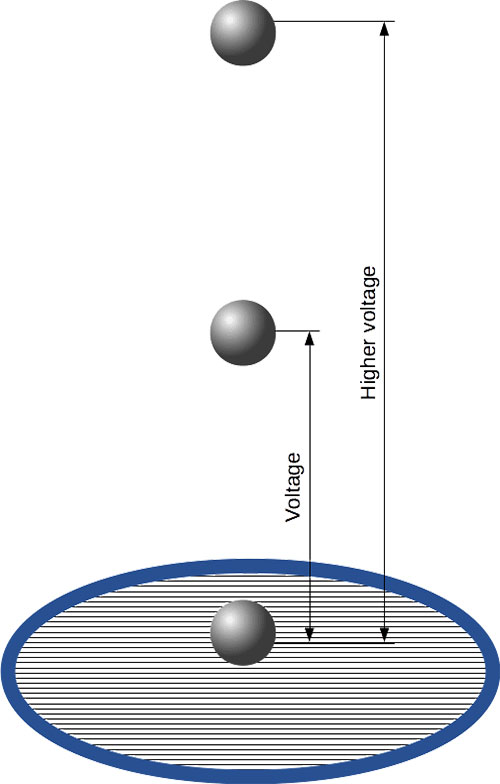 In this example of the ball, gravity is operating much like an electric field.

Voltage is called as U.

Changing voltage of the audio signal in time 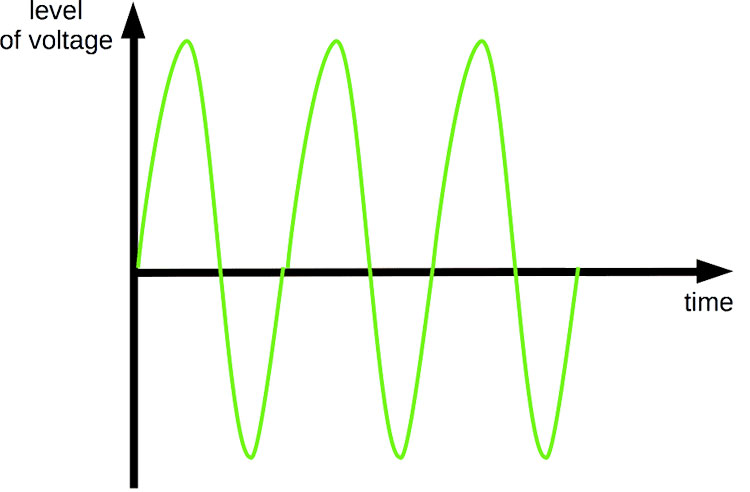 By the existing theory, electrical current is the moving of electrons. The voltage causes the moving from a higher potential point to a point with a lower potential.

Electrons thus move across wiring much like a pipe. Let’s imagine cross-section (ring) inside the pipe as shown in the picture.

Amperage of the electric current

The ring is infinitely thin. The number of the electrons that can pass through is measured as an electrical charge. Amperage is the charge that pass thru the ring per second.

The amperage is called as I.

This particular type of current is considered direct current. where the current moves in a single direction.

Voltage in point can be changed though. Let’s imagine 2 points, A and B. In the current moment in time point A has a higher electrical potential than point B. Electrons move from the point with the higher potential A to a point with a lower potential B (remember our ball analogy?)

It is now what we call an alternating current.

Let’s pay attention to the potentials again. There is one subtle detail we need to take note of.

For this, we will use the example of a simple battery design. On the battery, we can see 2 contacts “+” and “-“. On the battery’s body, we can read 1.5 V. This means that the voltage (difference of electrical contact potentials) between “+” and “-” is 1.5 Volt. 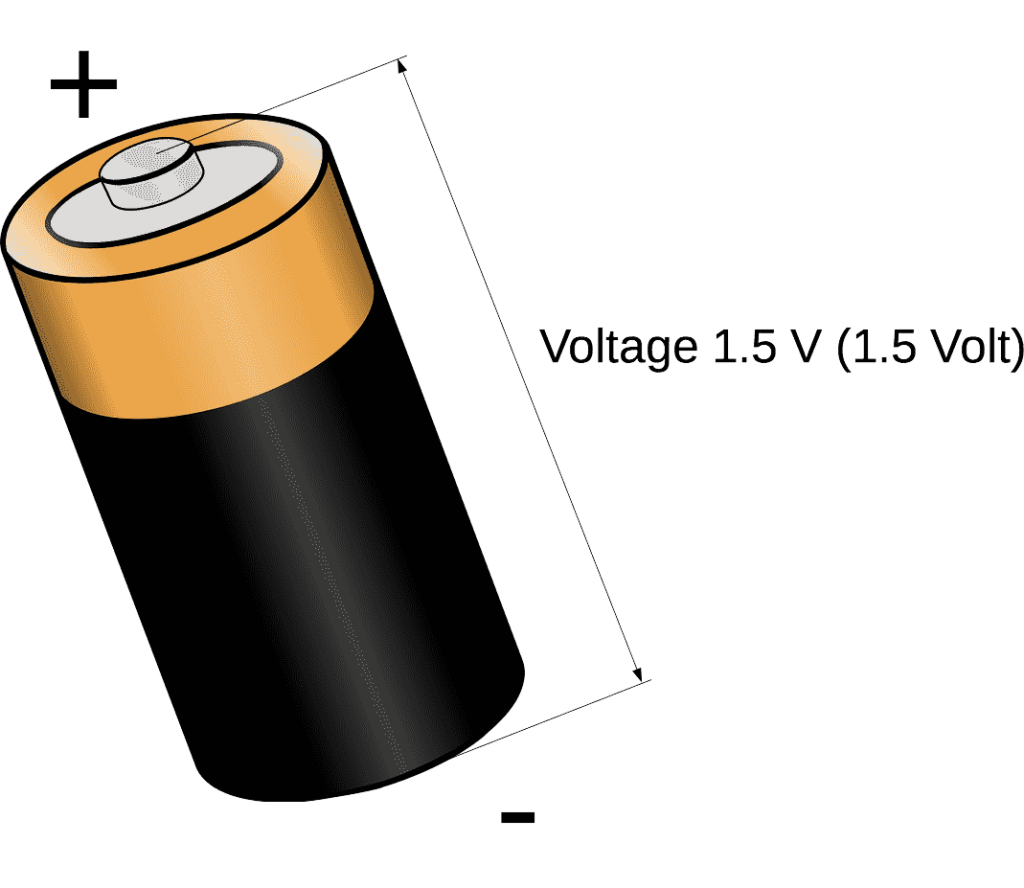 Mathematically potential “+” (positive potential) is more than “-” (negative). Electrons should move from a higher potential to a lower one: from “+” to “-“. However, electrons are negatively charged particles. So, in reality, they move from “-” to “+”. It is the reason why negative contact should be disconnected when an electrical device is turned off.

But when we learn electrical schemes, we consider “virtual” positive particles, that moves from “+” to “-“. Therefore, we need to follow context when we discuss the electric current direction.

So how are voltage and current are bound together? For this, we need to discuss electrical resistance.

When we considered electrical current, we looked to electrons the moved across the «pipe» (wire). In all things, I have described in this article, it doesn’t tap into the depth of what can be discussed regarding physics simply because particle theory is quite complex. However, what comes next is a simplified process to help those who are not familiar with the topic to quickly understand.

The”pipe” (wire) we talked about earlier is not an empty construct. It contains a crystal grid otherwise known as a wire’s molecular matrix. Electrons basically “stumble” around and through this grid.

The resistance is called as R.

In order to be able to understand an electrical scheme, we must first consider a stream of “virtual” positive particles (further “particles”) from “+” to “-” at the power source. 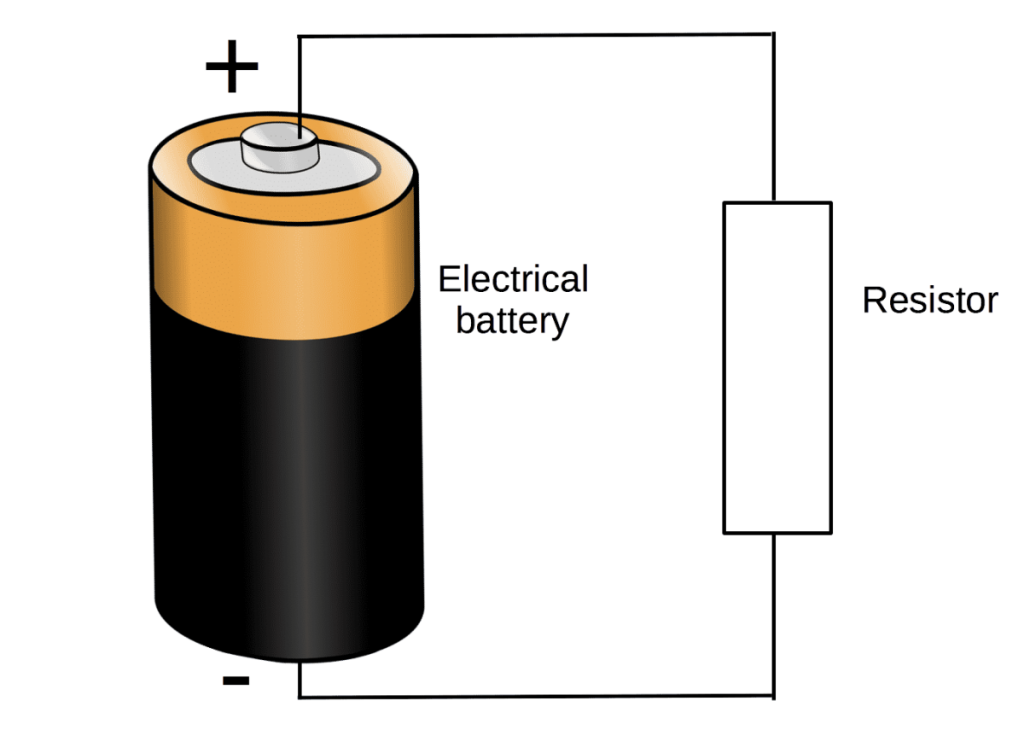 If we remember voltage is the potential between 2 points or the two contacts of the power source (battery). The potential creates force that moves the particles. The greater the potential, the more force and thus the faster the particle speed.

A scheme is basically a closed loop. Particles move from “+” to “-” of an energy source (battery). Inside the battery, the particles are moved from “-” to “+” through a conductor. For such “unnatural” movement the energy of power source will be easily spent. It is a bit like climbing the mountain in that respect. Further, the particles “naturally” move from “+” to “-” out of a power source again (akin to coming down from the mountain).

Particle movement in a electrical scheme 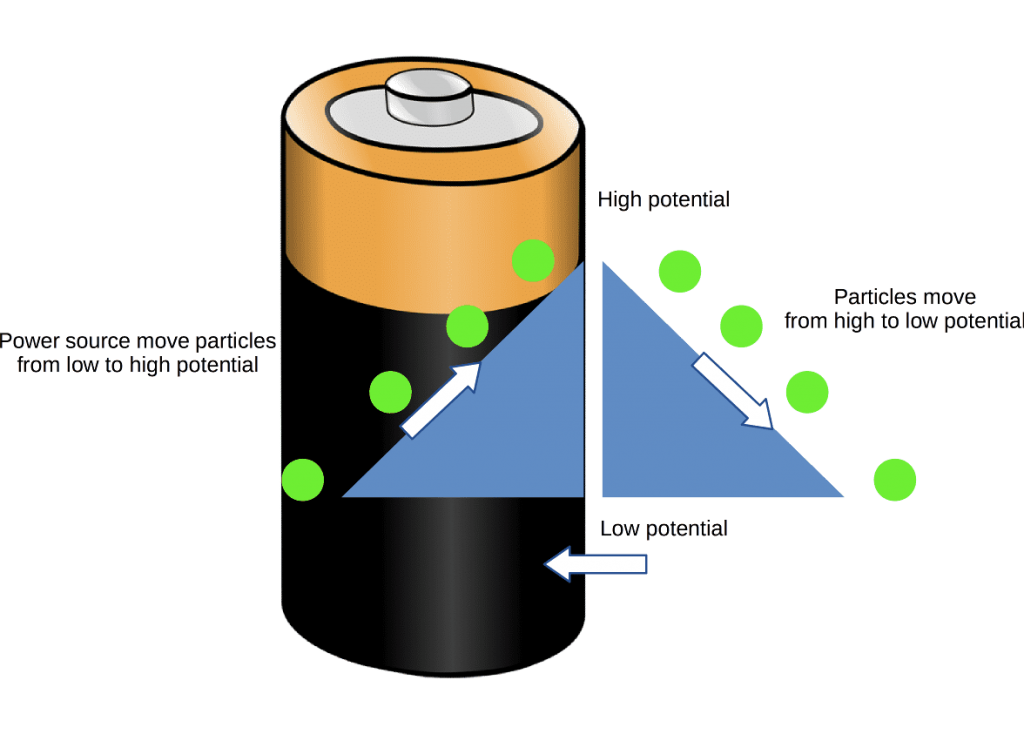 Therefore, the particles move through a closed loop allowing the power source to retain its potential and internal particle transportation ability. When particles move down from the “mountain”, they get “resistance” (ohms) from the crystal grid. The resistance thus will limit the speed of the particle movement. Fewer particle numbers will pass thru the wire in the same time period, i.e. higher resistance (ohms) will lead to a lower amperage. To increase the amperage we simply increase the potential or reduce the level of resistance (ohms).

Voltage, amperage, and resistance are bound via Ohm’s law:

To increase amperage we increase the voltage (potential) or reduce the level of resistance. Let’s look at a modified formula:

Voltage can be increased in a number of ways such as adding more batteries. Resistance or ohm level can be reduced by the choice of wire’s material replacement or increasing the radius of the wire (pipe) in which electrons can pass through. The smaller the wire strand, the higher the resistance level, for example, 26AWG is more resistive than 22AWG as it is a smaller gauge.

Electrical energy in many cases converted to thermal one 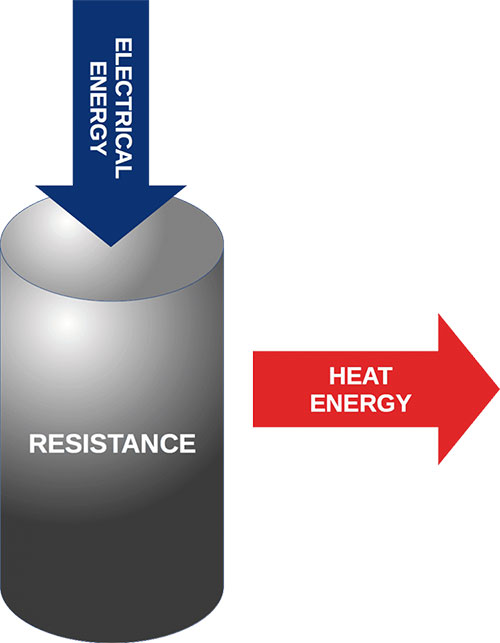 When we reviewed voltage we discussed that voltage is potential, that can cause movement of charged particles (electrons). 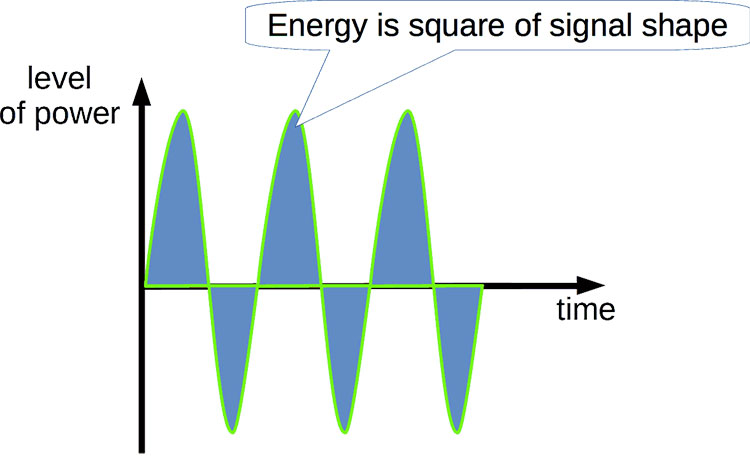 For digital signal processing the resistance may be accepted as 1.

So energy is calculated as square of signal power shape.

If we summarize what we discussed about Electrical terms we can summarize the following:

Let’s look to electricity from practical audio point of view.

An amplifier get its input voltage from a DAC and generates alternate current in the wires of an acoustic cable which are connected to speakers or a headphone. The current flow through the wires in a speaker or driver coil. In the coil alternate magnetic fields will appear. The magnetic field moves the driver which in turn moves air. We thus hear sound that is creating through the movement of air.  Electrical energy of the amplifier is spent to heat and the mechanical movement of the driver.

In the digital domain we consider “virtual” voltage values, that will generate real voltage in DAC.

What about DSP and electrical energy of audio signal? When we analyze dynamic range, overload, noise level, signal-noise ratio we refer to energy in signal frequency band rather than amplitude. So us need to remember that electrical energy is geometrical square of power. It allow us to easily operate in time (oscillogram) and frequency (spectrum) domains.