The FiiO Q1 Mark II is the company’s second-generation budget or entry-level portable amp/DAC offering balanced outputs. It is priced at $99.

Disclaimer: The FiiO Q1 Mark II sent to us is a sample in exchange for our honest opinion. We thank FiiO for this opportunity.

It has always been FiiO’s legacy and its building blocks to have a solid line-up of budget amps or amp/DAC. From the E07k to the E11 and more recently the Q1 and A5 in 2015 there has always been a strong company presence in the sub-$100 categories.

The recent launch of the Q1 Mark II amp/DAC aims to retain the company’s presence as the entry gate for budding new audiophiles whilst at the same time keep their competitive edge with some new and interesting features.

At just $99, FiiO has kept the fundamentals and purpose of original Q1 much the same but this time around there is a much more cohesive set of features that fit very much into what FiiO call “Infinity sound”.

The Q1 Mark II is one of the cornerstone products released by FiiO in the summer of 2017 under their branding moniker, “Infinity Sound”. There are a few talking points behind that phrase but the biggest highlight is the adoption of a balanced output or in the case of their IEMs, the inclusion of a balanced cable.

Offering a balanced output under $100 opens up a whole new marketing pitch and, if done correctly, a higher level of performance from source or IEM. The Q1 Mark II balanced output is not just a cheap split design either with the same amplification setup as the X7 Mark II AM3a module which I really dig for its IEM handling and musical signature.

The second major pitch of the new Q1 Mark II is more the sum of the parts rather than one distinct feature. Essentially the Mark II is being pitched as the perfect compliment to iOS.

Pretty much everything is being geared to make it a natural choice for that audience. This includes the price point, the new design, the improved volume and channel balance control and most importantly the official MFi Certification from Apple.

Just to note the unit we received is a pre-production sample and there will be some minor changes in the final retail unit to include the LED power button light from blue to green, the labeling color of each output or input and a more comprehensive manual guide in 8 languages.

FiiO has done a good job fixing some of the previous issues I had with the hip-flask form factor of the Q1 mark I. Out goes the slightly raised chassis and in comes a smaller, thinner and flatter rectangular form factor. At once the Q1 Mark II becomes a lot more stacking friendly for smartphone and budget DAP uses looking to strap on the Q1ii to the back of their source. Shape-wise it’s a bit more uniform also and easier to work with smooth curved sides compared to the older edged cornering. 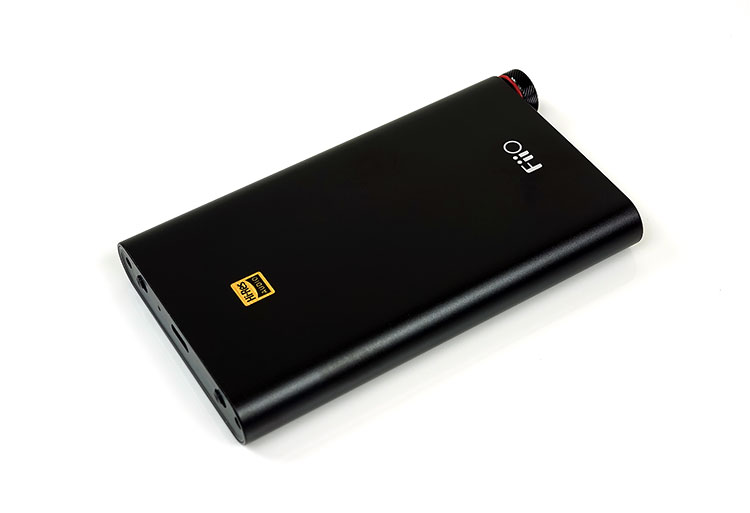 Weight wise the Q1 Mark II is about the same at 100g, however, the dimensions are a bit more streamlined than before. The new Q1 Mark II measures in at 99mm x 59mm x 12.5mm compared to the older 97mm x 56mm x 13.1mm. It is a bit longer and wider but more importantly it is not as tall and that lower profile makes it the better mating partner for ever slimmer smartphones.

The volume potentiometer is a new design and somewhat smaller than before. The form factor is an obconical or inverted cone type shape similar to that found on their A5 analog amp with 45-degree lines etched on the outer ring for better grip.

There may be some concerns from old Q1 users that the smaller pot may present some ease of use challenges on the go or behind a smartphone in a stack. Despite its diminutive nature, it is surprisingly easy to grip and use. It’s dual function of powering on the device also comes with a reassuring mechanical click noise as you power it on. What I do miss is the old bumper guard form the Mark I which I always valued for the protection they offered from accidental volume knocks. 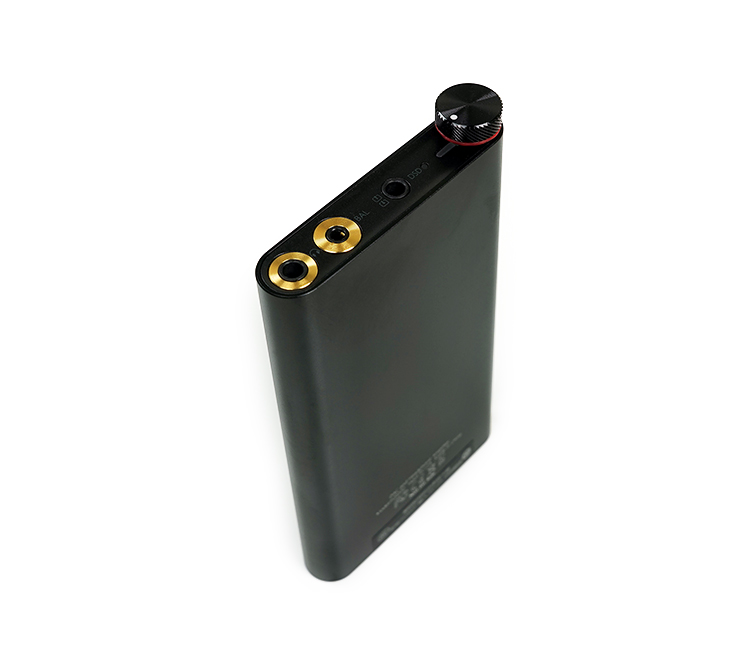 FiiO has retained the all-metal shell of the original Q1 (front and back panels are plastic) but in some ways, they have enhanced it. Alongside the form factor changes for better stacking and handling, they have also added an anodized sandblasted finish to the outer shell for easier gripping. The metal exterior is claimed by FiiO to also protect the device from EMI generated by smartphones that can interfere with audio quality when in use.

There have been a few changes in the input and output layouts to accommodate the new 2.5mm TRRS jack output on the front panel as well to tidy up the port alignments given its smaller chassis depth. 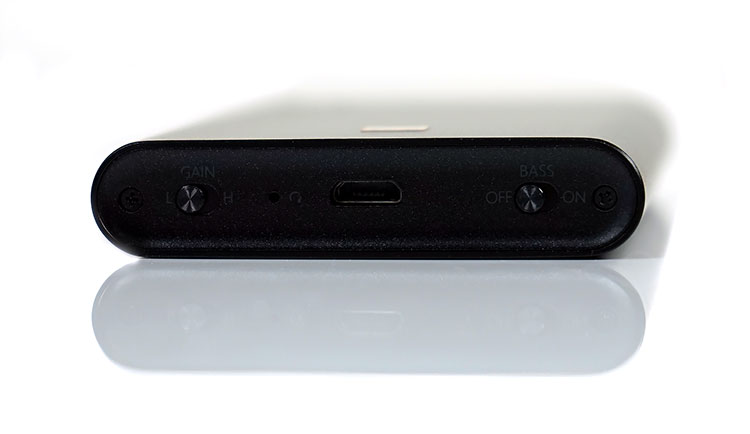 To the rear, the line out of the old Q1 is now pushed to the front to make way for a gain switch to the far left. The Mark I bass boost has been pulled from the front panel and re-positioned to the far right on the rear panel with charging DAC/out micro-USB port remaining central.

FiiO has resisted moving to USB-C for their port connections so there is not a huge amount of future proofing. Micro-USB is still their mainstay for all their digital products at the time of writing. 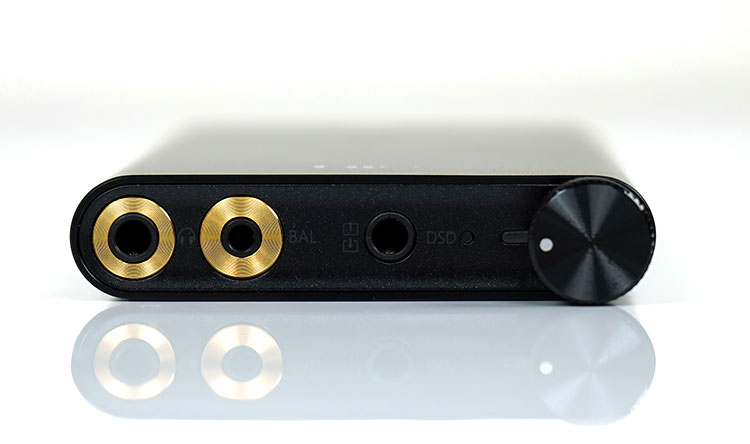 The front panel is now a lot busier in terms of inputs and outputs, It is also a bit classier looking with gold plated 3.5mm unbalanced and 2.5mm balanced outputs to the far left and a switchable line in/out jack in the middle. Towards the right, there are two LED lights. The first denotes when DSD decoding is active and the second just behind the volume pot will glow green indicating power on.

The battery in the Q1 Mark II has gotten a slight upgrade to 1800mAh compared to the previous 1400mAh. However, the rated battery life has dropped from 30 plus hours to 20 plus hours as an amp and 15 hours to 10 hours using the DAC.

I suspect this may be a conservative estimate based on the upgrade in DAC chip from the very low powered cheaper PCM5102 to the more capable AK4452 combined with the 2.5mm balanced output drawing more power. higher sampling and bit-rate converting capability such as DSD combined with balanced output will likely give you those shorter hours.

Charging time is around 4 hours or less which is in line with the previous Q1 Mark I’s recharge rate.

The Q1 Mark II had ditched the more limiting Texas Instruments PCM5102 DAC of the Mark I and elected instead to use an AK4452 for DAC duties.  Previously the Q1 topped out at 96kHz/24bit decoding however with the AK4452 the Mark II is now capable of a much more competitive 384kHz/32bit decoding as well as native DSD converting up to DSD256. That is as good as it gets at this price point.

Now, this is where I find things quite interesting. Previously the Q1 packed a fairly moderate Maxim MAX97220 amp stage capable of 190mW on a 32Ω load. The Mark II now uses the OPA926 amp chip which is the same one found in the all-new AM3a amp module.

Granted the resolution might be lower than a X7ii/AM3a combo but the amping refinement should be a big step up from the Mark I.

Amping numbers on the Mark II are also slightly different to the Mark I. The Mark I was fixed at 190mW into a 32Ω load. On the Mark II, it’s now lower for the 3.5mm output at 75mW into 32Ωand 112mW into 16Ω which should suit efficient IEMs better.

Balanced on the other hand is a jump up to 220mW on a 32Ω load and a fairly healthy 240mW into a 16Ω load. Balanced should also give you a bit more reach for harder to drive headphones than the old Mark I was ever capable of.

The only caveat with this switch is the slightly higher output impedance of the new amp design. The 3.5mm output is just on the edge of where I like it to be at ＜1.2Ω whereas the balanced output is higher at ＜2Ω. Compare that with the Mark I 3.5mm output which was at much lower ＜ 0.3 Ω. 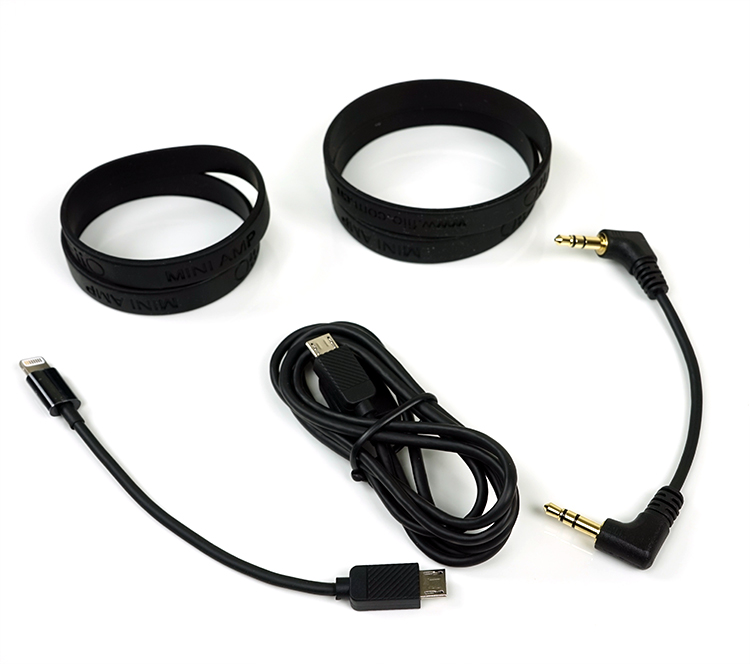 FiiO has re-designed the packaging again for the Q1 with a more compact retail box and now sporting the “Made for iPod, iPhone, iPad” moniker that you can use once you have gained MFi certification. It could mean you can find the FiiO units popping up in some Apple-related stores moving forward.

Inside you receive a range of rubber straps and a silicone resting pad to assist you in stacking with your source of choice. In terms of included cables, you will receive a short micro-USB to lightning cable and a right-angled 3.5mm short IC. You also receive a standard USB-A to micro-USB 1m charging/USB-DAC for connecting to PCs. Macbook USB-C users will have to port it. 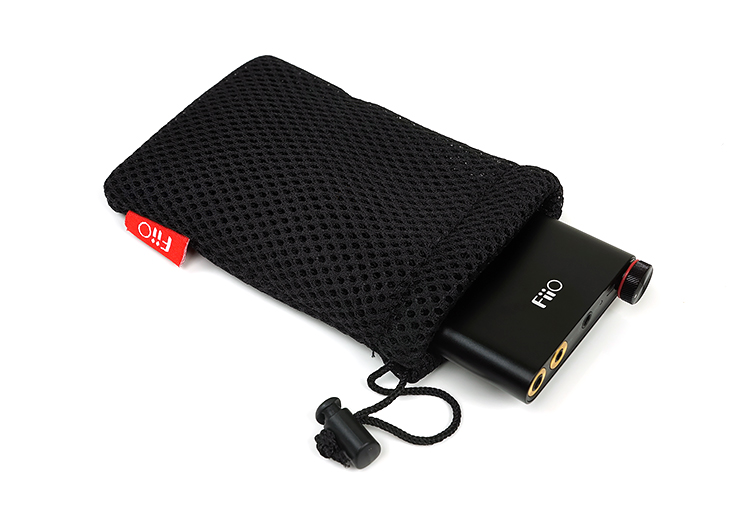 FiiO has also redesigned their pouches and moved away from the padded cases found with the A5 to a more flexible porous mesh pouch similar to the ones you find with ALO Audio amps. I love these pouches for their looks as well as their excellent durability. They do actually protect the Q1 Mark II from accidental knocks rather better than you would think.