The Verum Audio Verum 1 is a new full-sized open-back planar magnetic headphone. It is priced at $300 and officially launched on Kickstarter Aug 21st, 2018.

Disclaimer: The Verum Audio Verum 1 sent to us for the purposes of this review is a sample only and Verum Audio is not a site advertiser. You can find out more and pre-order the Verum 1 on their Kickstarter Page here.

Over the last 2 years, planar headphone companies have been slowly reclaiming the “mid-fi” price point with more affordable versions of their flagship technology that was dominating the marketing up to that point.

Companies such as Audeze have been resurrecting old favorites such as the LCD-2 Classic at $799. MrSpeakers have brought their FLOW tech to well under $1000 with the AEON series.

Hifiman has redeveloped their drivers with the Sundara for just $499. Entirely new entries such as Advanced are competing hard with their full-sized open-back Alpha, also priced at $499.

All good times for audiophiles with more modest budgets. However, what about a full-sized open-back planar headphone at just $300? Sounds really tempting right?

Well, let me introduce you to the Verum 1 from Verum Audio out of Ukraine. It may be early days but I can’t honestly think of a planar headphone at such a cheap price that gets so many things right.

Verum is as boutique as they come in the audio business. Roman is the main man behind the Verum 1 and he hails out of Ukraine. I have been in communication with him now for around 4 months and we have been testing the Verum 1 for about 3 out of those 4 months. Quite a lot of my initial impressions and pics have slipped out with permission granted.

So, it is all new in terms of the company startup and the Verum 1 is the first, in what he hopes to be a long line of planar headphone developments. The big pitch is that price point, well at least on a superficial level. The real surprise is what you get for just over $300.

Everything is researched, developed and hand-built by Roman (with a logistics supply chain from beyond). Most importantly the raw materials and drivers are not off the shelf. They are entirely proprietary, tuned and matched by Verum Audio in their own labs.

To get this out to the market he is hitting the crowdfunding route and has some running commentaries for a while now on Head-fi which gives some fascinating insight to both the discovery and final product manufacturing process. I highly recommend you read it at some point and not just rely on our review which couldn’t possibly cover all the data Roman has thrown down on the forum.

The Kickstarter Page launched on August 21s,t 2018. You can find it here and the early bird price was $299 but we are now on the second wave after just one day at $349. As with most crowdsourcing projects, there is a waiting period and expected deliveries are advertised as coming in January 2019.

Let’s start with the basics. The Verum 1 is an open-back circumaural planar magnetic headphone. Inside, Verum Audio have deployed a double-sided magnetic design with an 82mm driver (moving part). The driver is housed inside a cup measuring 107mm in width with 105mm magnetically fitted ear pads sitting on top.

Verum Audio has deployed 3mm magnets either side of a 7mm serpentine trace coil membrane inside the Verum 1 The membrane itself consists of a mix of 8um of mylar and 8um of aluminum.

Around 85% of the membrane surface is actually covered by the trace and overall, when combining cups, pads, and grills the Verum 1 boats of an approximate 70% open surface area. (Note the picture above is a working prototype and not the final production unit version).

Compared to the likes of Hifiman and Audeze’s ultra-thin nano grade depth and single-sided designs the Verum 1 trace design is a little thicker. When I asked Roman the reasoning for not going single-sided and aiming for something a little thinner he spoke about two key areas he wanted to focus on.

The first is reliability. A small boutique firm cannot really afford to have too many recalls or diaphragms and trace designs that could tear. The margin for error I suspect is much finer at this embryonic stage. A slightly thicker trace is less likely to break before, during or after production.

The second issue is one of sensitivity and control. There is less of it with single-sided magnet systems. The benefit of going single-sided is the ability to reduce the level of reflections and as a result, they tend to also exhibit a higher level of micro-detail in their presentations. However, they can be harder to drive and double-sided (push-pull) designs are more complete in terms of diaphragm excursion control.

Just take a look at the spec sheet to see what kind of efficiency Verum Audio have managed to get out of the Verum 1. This is a 12Ω, 96dB planar headphone. Whilst the likes of the LCD-2 Classic and the PM-3 have a higher dB level (102dB), all their power ratings are higher with the LCD-2 rated at a much bigger 70Ω. On paper, the Verum 1 should be easier to drive. 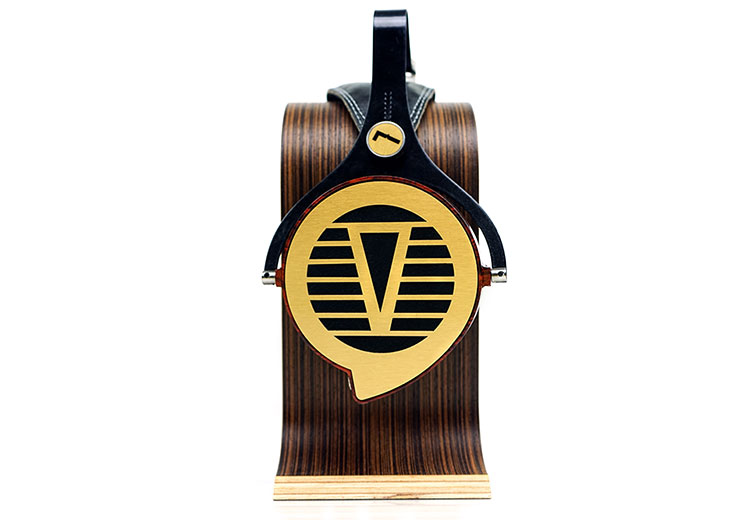 The visual aesthetic is unusual and at the same time eye-catching. Certainly, there is more than a hint of Eastern European in the design with a striking almost 40’s style retro gold colored grill sitting on top of a polycaprolactam (durable plastic) cup. The grills are fashioned from CNC aluminum and the housing of the cup is finished with an aqua print on the surface that gives off a very Zebrano wood looking vibe. I am told that a carbon fiber printed version will also be available as a second option when the KS source page is launched. 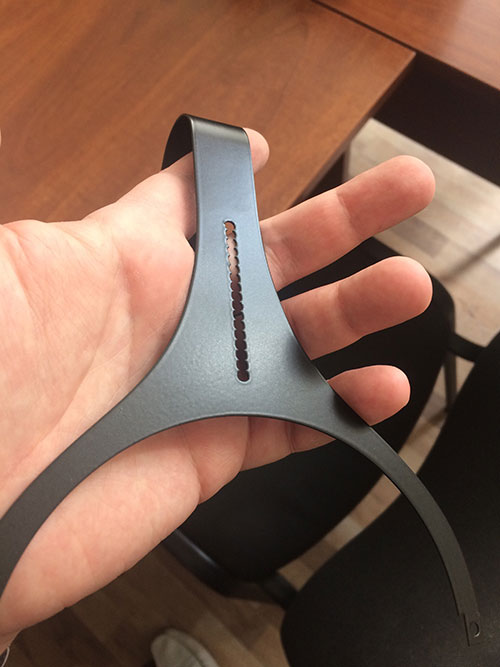 The aluminum gimbals on all units are locked in either side with a set of pivot screws and look very durable. They also form the headband with one on each side locked together at the top with a large locking “V” logo’ed screw made from titanium. The version I have and the one you see in the pics has a glossy finish but as in the pic above Verum Audio will be launching the production version with a more attractive matte black finish.

I also had an issue with the general levels of noise and creaking from the metal of the headband. After a quick discussion, there were a number of areas we agreed with Verum that needed a little damping including some rubber dampers at the pivot nuts where the noise is emanating from. I would go further and say a small stiffening block on each side around the locking bolts might further isolate from any unwanted noise traveling down. However, this might also add a bit of undesirable weight so it is a trade-off. 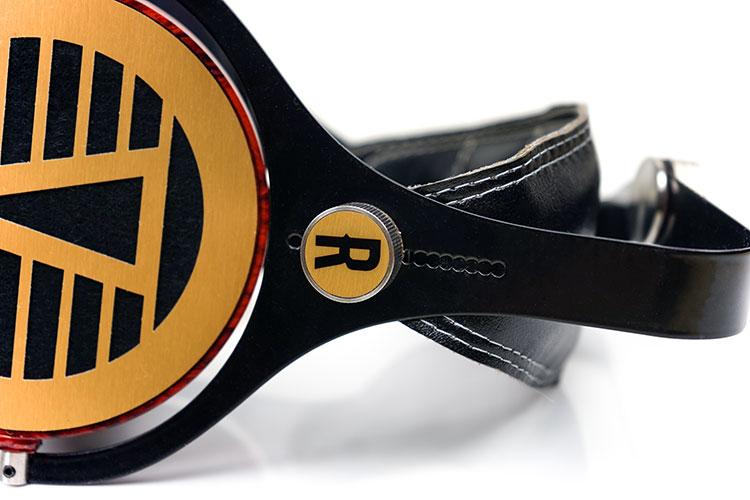 Each gimbal has its own independent adjustment system which comprises of a number of closely aligned notches into which another titanium “nut and screw” system is deployed. This is a bit like the Kennerton Odin and Vali system if you have used them before.

Technically, you may be able to adjust them when on your head but I find it so much easier and faster to unscrew the dials on each side and visually adjust or fine tune and then tighten before wearing them.

The Verum 1 is a 520g headphone. Now for users of double-sided magnet headphones such as the Audeze LCD series or Hifiman’s HE6 this is nothing new. However, in 2018 that may be considered a touch on the heavy side for those used to the newer lighter single-side magnet designs such as the AEON series from MrSpeakers.

However, here is the genius of the Verum 1 headband design. In summary, the pressure balance is excellent. This is one of the comfiest heavyweight planars I have worn in quite some time. It is not that it is suddenly light on the head, but rather you simply not struggling with it after an hour or two of use. There are a couple of areas I think Roman has paid a lot of attention to get that balance right. 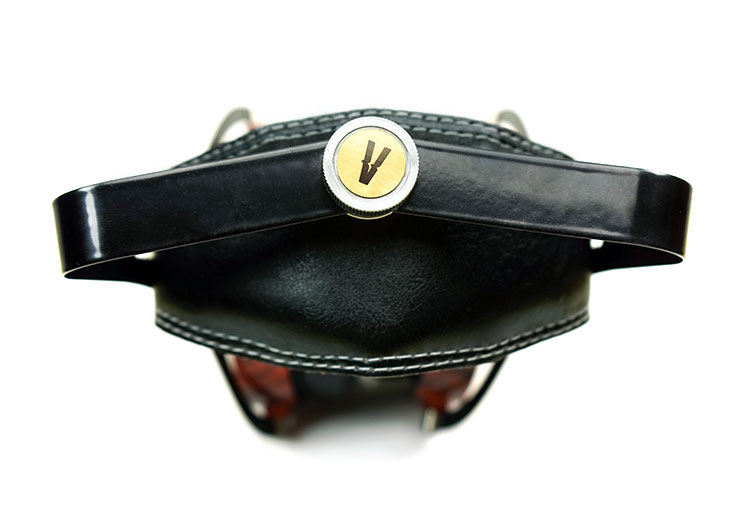 The first is the leather strap under the metal headband. It is a ribbed design but quite thick and dissipates any downwards pressure onto the scalp quite efficiently.

The second is the sideways clamp. It feels a touch tighter than the likes of the LCD-2, perhaps more on par with the Advance Alpha. It generates a little more sideways pressure but lifts that weight away from the top of the ear where I tend to find discomfort to start on heavy headphones.

The final area is the adjustable headband design itself. The little screw locking mechanism is adjustable, meaning you can move each side of the headphone in and out either by hand or naturally with the shape of your head. The cups also have a degree of up and down swivel making this a 180-degree system with plenty of room for adjustment.

Those who complained about the lack of flexibility in the cup positioning on the Hifiman Sundara should take a look at how the Verum 1 system works. It is the perfect antidote. 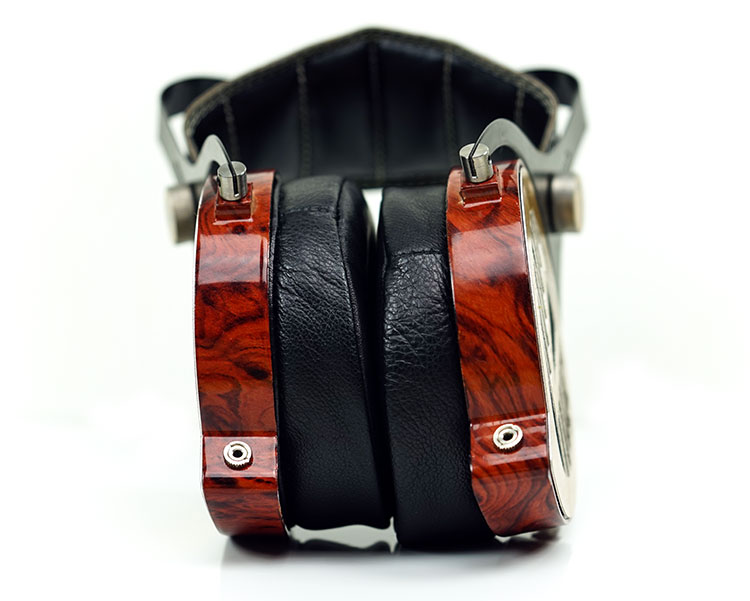 The pads are thick, soft and made from real leather. Perhaps the final piece in the excellent levels of comfort on the Verum 1. They are angular to the rear and base for a good seal and to better follow the line of your neck. Think Audeze or MrSpeakers Alpha Prime levels of comfort and you are in the right place.

Here is the positive kicker – they are magnetically detachable. Oh boy, thank you for making things so darn simple! You simply lift them off and place them back on and the magnets will do the rest of the work. And no, they will not interfere with the driver magnets. The thin magnet ring on the underside of the cup leather is not strong enough or near enough to do that.

The Verum 1 is terminated at the base of the cup with two forward facing 2.5mm jack ports. They accept the same 2.5mm terminated cables such as you would find with the Hifiman HE1000/V2, Edition X V2 but not with the new Sundara which has changed to 3.5mm plugs.

The ports are not flush into the housing thank god. They are slightly raised and stiffened with a sturdy metal ring finish on the port. The connectors have an internal locking system which is resistance based so you simply insert and push and the cable and port will lock and retain the lock until you are ready to detach (the same process in reverse). 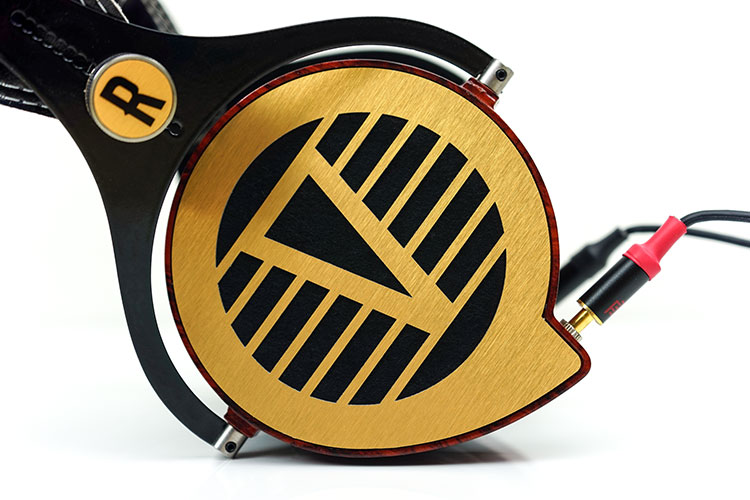 Now, this sample came to me without a stock cable but I am told the supplied 2m cable on the campaign will be a decent one with using an OFC wire with a nylon jacket and terminated with a 3.5mm TRS jack and will come with a 6.35mm converter. Beyond that, you guys will have to chip in how it handles and sounds when you receive it. 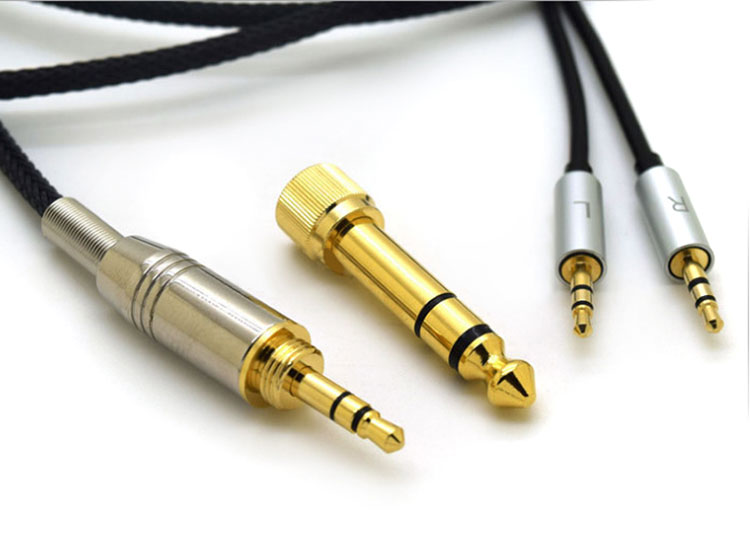 During this review, I used a 2.5mm plugs terminated HPX-1 cable from Audio Art. The HPX-1 series uses a single HXP-28 cable at the heart and a pair of Eidolic 2.5mm plugs. The HXP-28 cable design features 2 paralleled cables with twin 28 AWG OCC Copper conductors in each cable insulated with PE dielectric and a braided silver plated OFHC copper shield. it comes in both 6.35mm and balanced format.