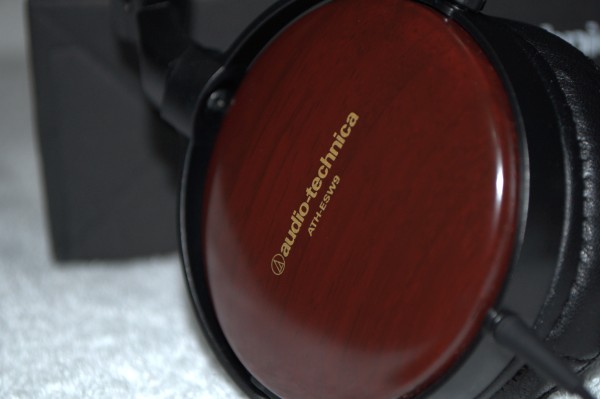 I’ve had the ESW9 since 2009 an all I can say is that it is my all-time favorite portable closed can of all time – it looks very classy, elegant and sounds very good to boot. Before I got the HD650, this is my go-to-can for listening to tracks not requiring a lot of speed ( I have Grados for that) and female vocals. Even with the Hd650, I still grab this can a lot and it still never fails to impress me with its thick, luscious and tubey midrange.

The ESW9 isn’t exactly a new can – released in 2007, it was already succeeded by the more exclusive ESW10jpn with Echizen Lacquered wood cups and the brushed metal, 50mm driver ES10. I’ve also heard the ESW10jpn and I would have to admit that it is the better can in all aspects, but the allure of the thick luscious mids compared to the ESW10’s more neutral midrange keeps me coming back to the former.

The ESW9 is a thing of beauty – Hokkaido Cherry wood cups (or African Paduak wood if you have the ESW9A)and genuine lambskin earpads invoke a feeling of luxury the best your ears can have. the pads are very comfortable amidst being supra aural – I can go for hours wearing them without my earlobes getting sore and sweaty. There is also a bit of a clamping force but not to tight, just about right for me.

The ESW9 being an over the ear can does provide decent amounts of isolation, but taking them outside shows it’s witness in this department as loud noises can easily leak through the pads, although why would you take this beauty out in the first place? :D

Basswise the ESW9 is no slouch, in fact I think it might satisfy some basshead cravings. the ESw9 has very good bass presence – theres a lot of bass but it isn’t the thumping and boomy kind, the bass simply blends well with the overall sound. Although there are some times where it bleeds a bi to the rest of the spectrum, but most of the time it’s well controlled and has just enough warmth and punch.

Where the ESW9 shines the most is in the Midrange – thick, syrupy midrange that’s not too forward or recessed, that just makes female vocals, acoustic and jazz music sound absolutely intimate and emotional. pair this with a good tube amp and the midrange shines even more. Although amping is not really necessary with the ESW9, it definitely brings more lushness, body and dynamics to the overall sound.

The highs meanwhile are what I wouldn’t call as sparkly, shrill or rolled off, it  just has enough presence to be non-interfering with the rest of the spectrum and  and  has just the right amount which doesn’t leave the listener tired after long listening. it’s very polite if that’s the right term.

The ESW9 also has fairly decent soundstage, not too wide nor too closed in, everything is just right and same goes for it’s instrument separation and imaging – it just has the right amount of detail without being too analytical.

Of course, the ESW9 is not without it’s weaknesses. First of all the coloration of the sound makes it a slow for livelier music like rock, metal and some pop, hip-hop and RNB tracks. with some busier tracks the midrange tends to get pushed into the background, although I only found a few tracks where the ESW9 exhibits this problem.

Now recently I had the chance to have the ESW9 recabled with Blackwing’s Deuce silver cables , and boy did it improve a lot. The highs have a bit more sparkle and presence, bass is tighter and it gained a bit of speed, and now it also feels that a veil has been lifted from it. the ESW9 now sounds more balanced without compromising it’s great midrange. so if you have the chance to recable them, do it! :D

Overall the ESW9 is an essential midfreak can, with it’s liquid, tubey midrange, and  lows, highs and everything else in just the right amount to satisfy many genres. Now that the price is steadily dropping on this gorgeous pair (around $200-25o  online) i’d say it’s one of the few portables worth getting that looks good as it sounds.