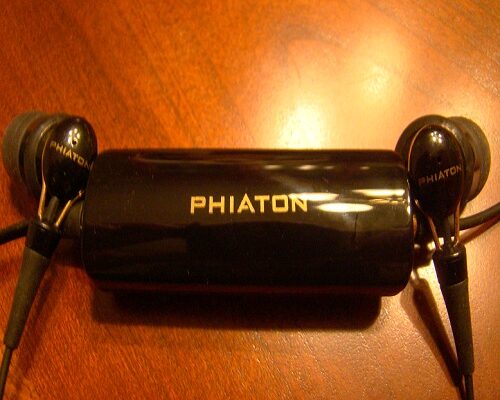 Noise cancelling? On an IEM? What is this!? Well, the Phiaton PS20 NC is a half in-ear dynamic IEM, that happens to have noise cancelling to make up for the fact that it doesn’t isolate as much as a full-fledged IEM. It is advertised to have great bass, while still retaining excellent mids. Does Phiaton fudge the true story a bit? Read on to find the answer! 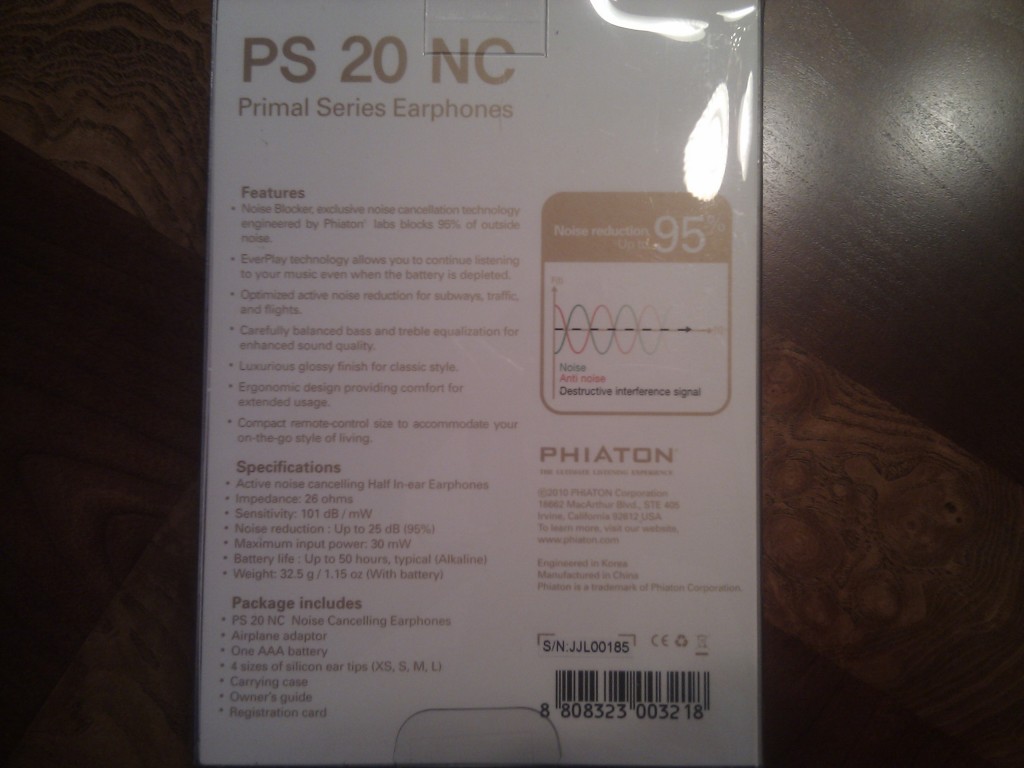 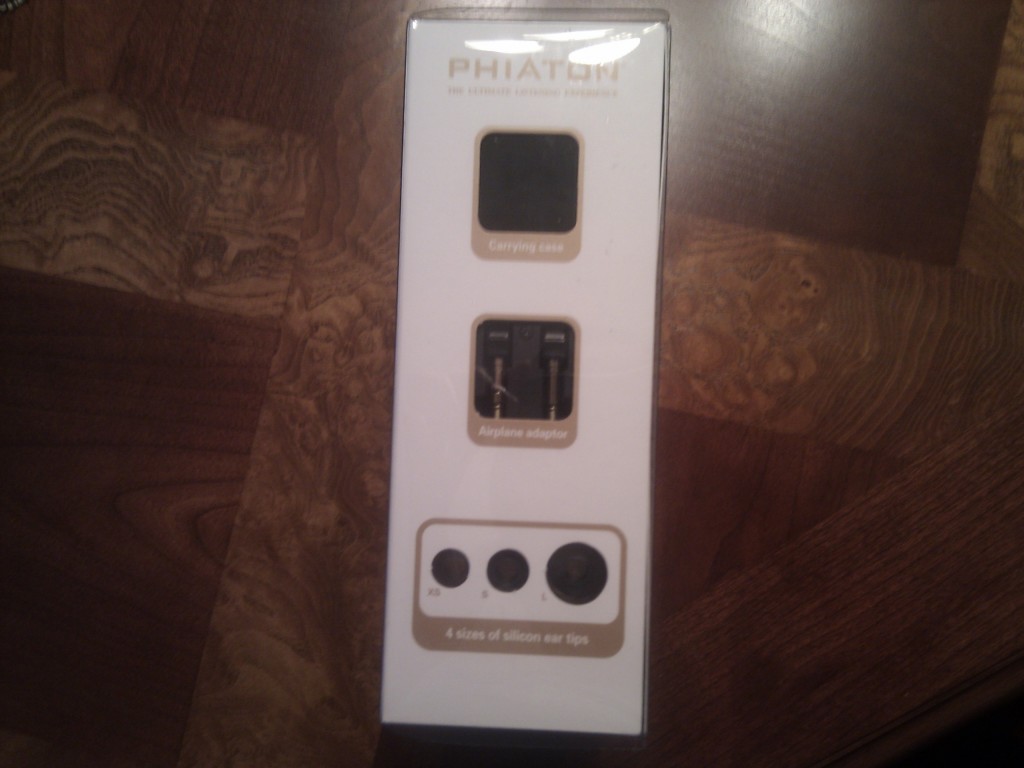 The packaging of the PS20 is decent. It’s a plastic box with paper insets. Nothing special. Inside is the IEM, 3 extra pairs of silicon tips, airplane adapter, and a funky textured pouch. It’s a meager set of accessories, but one doesn’t really need much for IEM’s other than tips and a pouch. 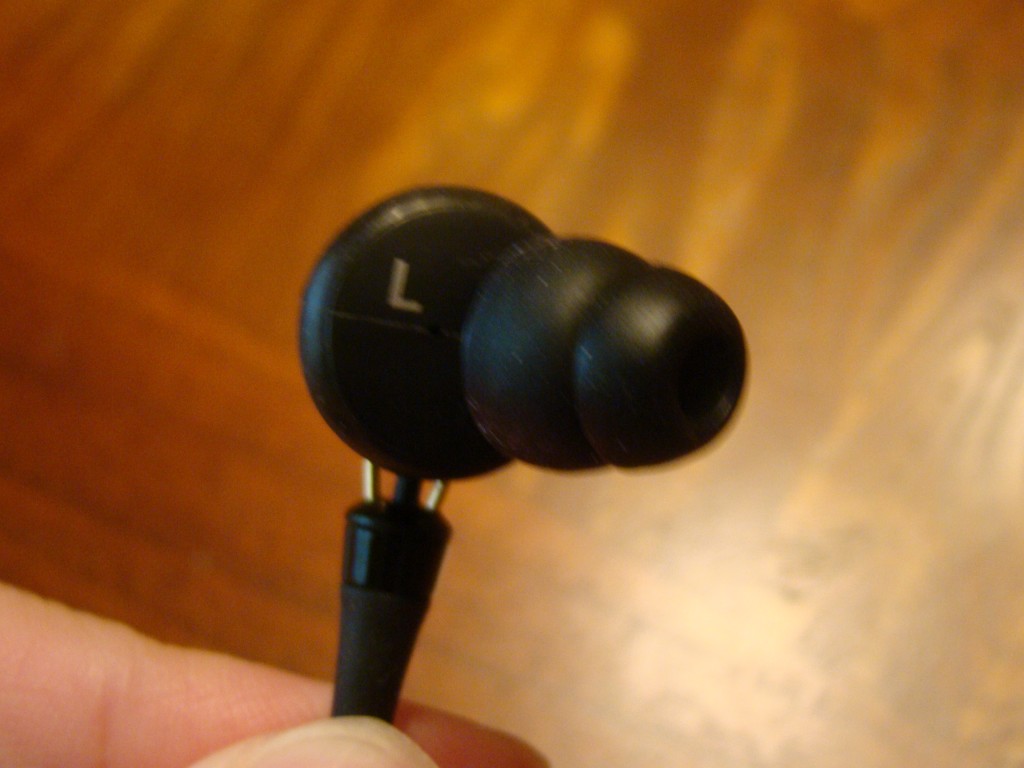 The PS20 is a beautifully design IEM. The plastic used for the housing is a deep glossy black, the gold accents are metal, but the thing that worries me is that the two sections of the IEM are held together merely with a band. Not even any glue. I’ve had to baby these so the band doesn’t come off, exposing the driver (which looks really really cool). There is a bit of exposed wire, but I see no reason how it could be a big deal. The plug is a straight plug (which I rather dislike on IEM’s because it puts more stress on the plug than a RA) that is strained decently enough, though I’d be careful. Wire is of respectable gauge.

First impressions weren’t that great. Stock tips (which happen to be the only tips that work with the PS20 for me) hurt, so I switched to Monster Foam Supertips. Bad idea. There was no bass to speak of. I was thinking I had a faulty pair. I tried every tip I had, and the only pair that gave me a nice bassy sound was the painful stock tips. Guess it was time to man up.

With the stock tips, I found the sound to be quite…interesting. It reminded me most of the Monster Beats Pro. The mids sounded artificially boosted, while having nice, impactful bass. Treble sounded smooth and free flowing. I put on Downward Spiral to test for these first impressions because, well to be blunt, it’s the most interesting album I can think of that I have in my N2 at all times.

For this review, I will be using a NaNite N2, a warm sounding player with a nice bit of powah. Music will be in 320kbps, like they should be!

As said in the first impressions, I find the highs to be wonderfully smooth. I prefer the smoother highs to the CC51 though. The treble, while smooth, is detailed. Cymbals are flutes are rendered a bit too muffled for my liking though. With tips other than the stock tips, the treble is more clear, but can get grating with some tips. For best sound, stay with stocks until further notice (I find better tips). About the mids…I might get some wristslapping from Phiaton, but to be perfectly honest, I dislike the mids of the PS20. They just sound totally…wrong. They’re grainy, artificial sounding, and too forward, much like the Beats Pro (then again, the fact that I’m comparing them to a $400 headphone might be a good thing) Although with as much hate as I make it sound like, if you haven’t heard much better, they may very well be quite good. It’s just that I’m a total mid freak and mentally compare every headphone’s mids to a much better headphone. On their own, they have their merits. The mids are definitely sweet, and make vocals, especially male vocals with their warmed up mids, sound wonderful if you don’t mind a slightly artificial tone to them. Now to appease those who are wondering about the bass. This is where Phiaton gets some brownie points. For everything that the highs and mids don’t get right, the bass is done right—for a commercial target IEM. It’s not the most detail, or the deepest, but it has great attack and decay. Sure, it warms up the mids a tad, but that’s exactly what is expected of a consumer IEM. The MEElectronics M31 has a leg up on it in pure quantity, and can’t compete with the luscious bass of the Turbine Pro Golds, but for what it is, it is splendid.

Detail is surprisingly good on the PS20. Microdetails aren’t its specialty, but minute sections of songs are audible, which impressed me for a $100 MSRP IEM with a convoluted design. The upside to being a half in-ear design is a spectacular (for an IEM) soundstage. The soundstage has great depth and width, but positioning is a trifle sloppy. As I stated before, the PS20 NC is very special because it has active noise cancelling to make up for the fact that the half in-ear design is ineffective for blocking sound out. Unlike most other noise cancelling headphones, the PS20 NC works even if you don’t have the NC activated, and without a noticeable decrease in sound quality either. The hiss is rather minimal if music is playing, and even if music isn’t playing, it isn’t very noticeable. The box advertises 95% of noise reduction. While I can’t exactly prove that, I do have to admit most background noises are very much suppressed. The downside to this is that the NC box is prohibitively large and unwieldy. The box also has a “Monitor” button, which stops sound from pumping into your ears when you need to hear something happening around you, but taking out your DAP is too inconvenient.

Now for this section, I will post my impressions for separate genres, since the PS20 is rather picky for which genres it will sound good in.

For pop, I’ll be using Fame Monster, since it’s a popular pop album, and plays to the PS20’s strengths. I think I’ve grown to an immunity to Gaga at this point to where listening to it is actually fun now. Vocals are sweet and grain is nonexistent; bass is fat and impactful, creating a fun listen, which the PS20 lives for.

For electronic, I’ll be using 4×4=12 by Deadmau5. The PS20 absolutely LOVES synth, and produces it in a wonderfully euphoric way that blends excellently with the bass, which never overpowers the mids. The smooth treble does prove to make the PS20 stutter at a few songs though.

Atmosphere’s When Life Gives You Lemons, You Paint That S#1+ Yellow will be used here since I really don’t have too much rap, but this album was given to me by a friend, so I’ve been using it for a few reviews. While it isn’t the best recorded, it’s still a fun listen. Anyways, vocals are a trifle grainy, piano is artificial, even though an electric piano is being used, it still sounds…wrong. Bass blends in with the mids, but can be overpowering at times.

Age Of Rockets’ Hannah for this section. It’s a gentle, free flowing album, and the tenor vocals are downright beautiful with the right IEM. Unfortunately, this isn’t the right IEM. Vocals are a bit hazy and digitalized. Bass is a bit uncontrolled, but the general sound is pleasing if you don’t pay too much attention to detail.

Tool’s Lateralus for this section. It’s a wonderful album to test on because it’s so complicated and quick. Guitars are nice and crunchy, vocals are grungy, but lack texture. The PS20 fails to keep up in some strenuously busy sections, but all in all, the PS20 can rock out.

Weltenkraft by Finsterforst is up for this section. Mostly to see how well the PS20 can integrate an accordion with thrashing guitars. Sadly, the accordion gets lost in the mix at times, and the guitar riffs tended to smear. Drums smeared a bit too, but retained decent impact.

A Fine Frenzy’s One Cell In the Sea for this part. Female vocals are a weak point to the PS20. They’re muffled for basically every female vocalist I tried it on. Pianos are also disliked by the PS20. But what’s there is somewhat pleasing. Don’t expect great results though, to be totally honest. The Phiaton PS20 NC is a compelling new product for those that want noise cancelling for planes and trains and automobiles that also want a warm and fun sound. For those people, I recommend this over the MEE CC51 for pop and electronic, but I can’t help but feel for the same price, the CC51 is a better bang for buck all around. The Phiaton doesn’t have great build quality because of the lack of real sturdiness in the combining of the driver and housing, and a weaker cable. Although I do recommend the PS20 over the CC51 if you want a larger soundstage, more forward mids, and less deep insertion. Would I recommend it to my friends? I’d say yes, if only because they look downright awesome with a sound to match. Even if it isn’t perfect, they do have some redeeming qualities with the right genres.

Thanks a lot to Phiaton for the review sample!