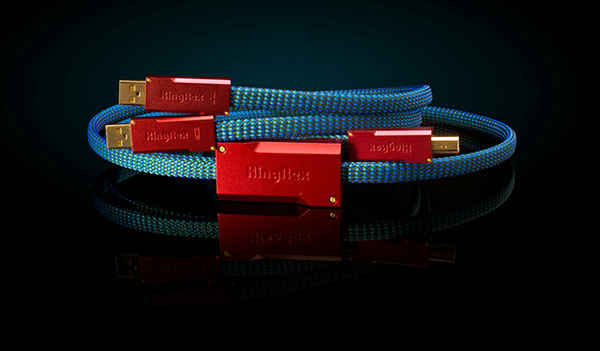 The Kingrex U-Craft (Y) USB Cable is a high-end dual-headed audiophile USB cable with a single line for data and a secondary line for power. It is priced at $649.

Disclaimer: The Kingrex U-Craft (Y) USB Headphone Cable Series sent to us for the purposes of this review is a sample and does not have to be returned. Thank you to Kingrex for giving us this opportunity.

The dark arts of cabling is notorious for causing outright war among audiophiles of all shapes and sizes. It is the one area in this hobby of ours that will just run and run in terms of will it or won’t it make a difference to the audible quality of your existing or new system setup.

Most argue based on price to performance ratio, others put forward the question of how data signal rather than analog signal can be improved with it is just a string of zeros and ones, and some just simply say that cannot hear a single bit of difference.

We argue over copper versus silver, purity, and performance, signal and connectivity – you name it and I will point you to a forum right now that has a contentious cable discussion thread.

Will it go on forever? Does the Pope say mass? Does Ted Cruz have issues? In short, you betcha it will continue because ultimately cables are big business because we all need them.

As for my personal viewpoint? I am kind of pragmatic on the cable issue, to be honest. The most I dished out in my analog days was on about 20 meters of QED Silver anniversary for my old B&W 6 series 2 5.1 system replacing my old bi-wired copper stock cables and the purity was upped a few notches and the separation and imaging were sublime.

I am therefore a believer in cables making a difference but the QED Silver Anniversary is not the most expensive in the world and they lasted for me for 10 years until I sold the system and went into headphones and the world of 2.1 (that is a whole other story).

It was, however, the best for me at what I could afford and if truth be told we all do want great cables but our cynical attitude is primarily driven by that price to performance ratio. Others richer than me must and will have the best just because in their minds ‘the best’ means they will have no more questions regarding the “what if”.

So now in the realms of personal audio and 2.1 my analog cables are pretty good for me with numerous upgrades and including some nice hospital grade power cables with a healthy array of AVR and suppression (If you live where I live you know that AVR is critical).

Yet still, I am working with my Monster u-link 500 2.0 cable with 24k gold plated connectors I bought about 2 years ago into my primary Rein Audio X3 DAC. Last I checked it is about $30 somewhere on Amazon and likely to be discontinued now. So when Kingrex of Taiwan said to try the u-craft (Y) USB cable I was thinking do I really want to go down this route?

This last unknown walk, this potential vat of snake oil? Curiosity got the better of me and two weeks later the cable is on my doorstep in a fancy box and it actually does look like a snake. I kind of chuckled at the semantics of what I was looking at.

Having said that the sheer beauty of this monstrous USB cable had me entranced to be fair. I mean it is not like it is a regular cable with a ton of marketing fluff, it is a massive dual-headed, thick cabled 2-meter audio anaconda and no messing about with the weight either weighing a whole lot more than regular cables.

This reminds me more of a good old fashioned high-end analog cable for a home audio system than a digital system USB connection. It looks expensive no doubt about it and by golly it sells for something like $600 on Moon Audio so if you are thinking this might make the all the difference on your FiiO setup or enhance the qualities of your Little Dot, Modi, Magni right up to even the Gungnir then I suspect you are wasting your money.

My pragmatism suggests $600 should go first on upgrading your amp or your DAC and not your cable, the differences will be much great on a better amp. If you are toying around $2000 plus DAC’s or more expensive 7.1 systems with digital input then this cable might serve its purpose a bit better if you think you have gone as far as you can. Perhaps therein lies the justification. 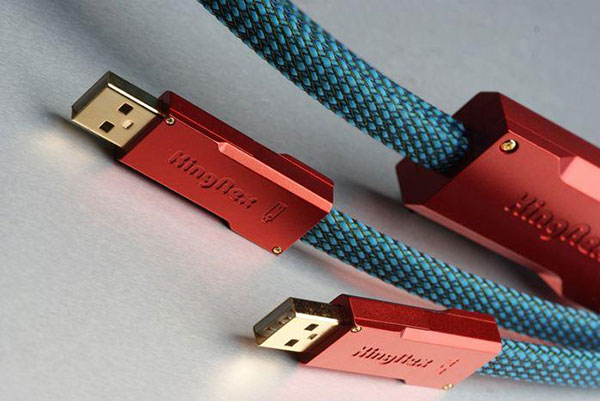 Probably the biggest curiosity of the u-craft(Y) blue line version I received was the dual-headed construction. Basically the u-craft cable works by separating power and signal into parallel lines instead of putting them together side by side in a single cable like 99.9% of USB cables.

The supposed benefit of this is lower distortion, better control of unstable power, reduction of jitter from PC to DAC, unwanted interruptions to system process and task fluctuations on your PC and to tell you who was really standing behind that grassy knoll on that fateful day in 1963.

The aluminum case in the middle of the USB then acts as a filter to eliminate noise and rearrange the signal, to further help reduce distortion here and get a cleaner signal. Actually joking aside I was always taught to keep my power cables well away from my IC so I believe in the logic of separating power from the signal.

It is not a new concept for me personally just it is the first time I have really seen it applied so visually on a USB cable and considering my PC has a ton of devices connected to it all sucking power I can see the immediate technical benefit.

The u-Craft (y) is also cryogenically treated. Now, what the claim here is (in simple terms) that it stiffens out the materials and enhances durability for the signal load in both power and data further reducing distortion.

It is always a very expensive process that usually translates into the final price. Some say it is worth it though for the ultimately smoother composite and ridding the metals of impurities such as carbides.

Of course, you do not stick both lines into the PC USB ports. You will completely do away with the claimed benefits of avoiding the deficiencies of powering via the PC and instead you will rely solely on the qualities of the u-craft as a standard USB Cable.

To get the most of the u-craft (y) you have to stick that individually labeled power cable into some sort of USB DC source. Well now luckily Kingrex sports the power which we reviewed and highly rated last year.

On its own (inserting both into the PC USB) the cable is pretty ok actually, marginally better than my Monster cable with a slightly thicker sound and a slightly smoother upper range.

Switching to the uPower

However, plugged into the UPower it sounded light years ahead of the Monster cable, to be honest. Using this setup to the Rein Audio X3 to the Hifiman EF6 there were definite tangible benefits with a much blacker background and a better sense of texture and control on the bass.

Now whether this is the benefit of the power being controlled on another cable or the Upower or simply an inherent feature of a higher quality silver-plated OFC in their construction that I cannot say with 100% assurance. I would need to compare this with a ton of other high-end cables but it superior to anything in my drawer including my Monster cables.

I also noticed that my EF6 stepped attenuator was up one notch more using my Monster cable than the u-craft(y) via the X3. As I was turning it up though I wasn’t searching for volume, I was more of looking for a bit more slam or something to that effect without resorting to simply throwing the gain switch to high on the back of the EF6.

There was a certain something I couldn’t put quite put my finger on that made the u-craft(y) shine that bit brighter with a more involving depth of imaging and sound stage. For the newcomer this might not be night and day but for me using my EF6 and Rein Audio x3 for a while now it did make me stop and ponder if $600 was the final solution for this particular setup.

The u-Craft(Y) is not for the budget system or perhaps even the mid-fi system. It will stop many in their tracks given the price. This is a pure high-end cable that will likely yield most of the anticipated benefits with a high-end system where cables suffer slightly less to the law of diminishing returns.

There are cheaper versions of the split theory in the market such as IFI’s Gemini Dual USB and iUSB power system so this is not unique but the u-Craft(Y) for me, given its length and construct will sit more at home on a home cinema setup or a high end 2.1.

There is much to admire in the presentation and build quality of the cable itself from the hefty and solidly build connectors to the filter unit and even the box itself is a cut above the class. Used on its own the cable is pretty good but for best results grab the uPower as this is where it performs best.