In real-world usage, these numbers seemed pretty accurate with the PM-3 consistently requiring more volume than the SINE DX with most sources and amps we paired it with. The SINE DX does indeed seem to be the planar efficiency king which is great news for portable audio users.

You should also have no issues with voltage requirements and get good volume even out of modest smartphones and portable sources. I was also very impressed with the quality of sound out of the LG G6 which I consider one of the best smartphones on the market for audio.

The G6 is a little bass lean with a brighter mid and top end but that kind of pairing makes for a very balanced offering with the DX. As a footnote the SINE DX volume sat comfortably at 50 steps on the G6 and the Oppo PM-3 needed 55-56 steps for similar levels.

As mentioned earlier in our review the SINE DX has an excellent response to quality amplification and whilst volume levels will never be an issue with Audeze’s latest and greatest the old caveats still really apply. It is, after all, a planar headphone.

I also found neutral amps and sources to fare better than warm or rich-sounding alternatives. I guess I was shooting for as much resolution, clarity, and top-end extension as possible without overcooking the low end.

There are plenty of amps on the market that will give you that kind of tonal response but generally speaking neutral and clean sources like the FiiO X7, AK240, RHA L1, and the current mode Bakoon HPA-01M sounded ideal with the DX.

With the LG G6, I could have happily listened to the DX without complaint, however, once we started moving up to higher-rated DAPs and amps there was a corresponding increase in dynamics, instrumental separation, and resolution.

For instance the X7/AM3 combo (shame no balanced cable option), I got a cleaner tonality consistent with the X7’s character.

The resolution and detail were even better on the DX with the neutral-sounding AK240. I also got a snappier low-end, a more engaging midrange, and a bit more sparkle in its top end. All tweaks that I find consistent with an improvement in dynamic range. 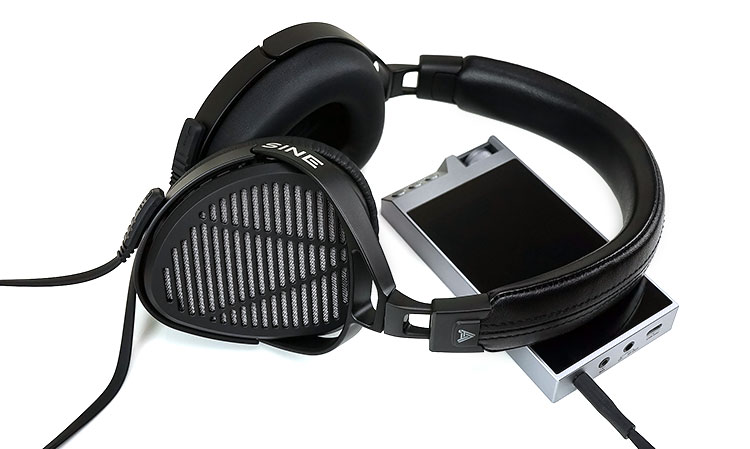 Taking it a step further with the impressive RHA L1 Dacamp again I got a further lift in dynamic response with the SINE DX when ‘DAC’ing out’ from the X7. Volume levels did not have to go much over 2/5 on the L1 dial.

The main difference between the L1 and the FiiO X7 was the control of the bass performance and the superior resolution and clarity in the lower treble. Vocals benefited immensely, sounding cleaner and more defined.

I also got similar dynamic range improvements with analog amps such as the Vorzuge VorzAMPduo II though tonally there is a marked difference compared to the RHA L1.

I preferred how the Duo II rendered vocals on the DX, sounding smooth and prominent, however, the L1 pairing had a bit more sparkle and energy in the upper mids and lower treble which tended to balance out the DX a bit more.

The absolute best performance came from the Bakoon HPA-01M current mode amp pairing. The current mode output gave me a very clean and balanced presentation with the DX SINE.

The low-end still had power but it sounded very tight, well defined, and quite linear leaving plenty for the mids to perform.

Vocals were very natural and clean and that attenuated top end got a healthy injection of sparkle. More importantly, the top-end sparkle sounded natural, lacking in any brittleness and with good articulation. A very satisfying pairing and shows what the SINE DX is capable of with the right amount of quality power.

There is a $200 premium on the AEON over the SINE DX and to be fair the AEON is more of a closed transportable planar design than the smaller and more portable open-on-ear design of the SINE DX.

They are not quite in the same niche but they may appeal to similar audiences looking for something they can take with them for travel or to the office.

Design-wise they both favor that ear-friendly teardrop shape but the slightly bigger cups of the AEON are circumaural as opposed to supra-aural and thus far more comfortable for longer listening sessions. The closed design of the AEON also means they seal a bit better.

Materials wise the SINE DX looks the stronger of the two and also the more visually attractive. The AEON has a nice selection of materials though and is very well built. It sports a leather headband, deep protein leather pads, carbon fiber cups as well as cast aluminum gimbals.

However, in the hand you can tell the AEON is built to be very light for its size compared to the SINE DX which has a greater emphasis on strength and durability. The inclusion of a hard carry case for the AEON compared to the pouch tells you the AEON does need a little more care in handling.

The AEON needs a lot more power than the SINE DX which is much more comfortable and optimal sounding on lower-powered sources including smartphones.

It falls on this but this is more related to its exact purpose than any technical failure. The AEON is more traditional in terms of planar power requirements whereas the DX bridges over more comfortable into consumer devices such as smartphones.

Both the SINE DX and AEON extend deep with little in the way of perceptible roll-off, however, the AEON has a fairly deep drop post 80Hz, much more so than the gentle slope of the DX.

The DX sounds the weightier of the two when it comes to low-end power as a result. The AEON will give you sub-bass rumble, the impact is good in that respect, and generally speaking, I would class it north of neutral. However, it is a touch lighter in weight compared to the DX but a little more articulate and resolving of the two.

Mids are more open and spacious than the SINE DX and also a little bit more neutral sounding. That dip post 80Hz takes a little bit of weight and body from instrumental notes, especially those pitching around the upper bass and lower mids.

It is not quite as thick and rich sounding as the SINE DX and lacks a little in the way of power. It does compensate with superior resolution than the DX offering better instrumental separation and a more holographic staging quality. You can further improve that upper bass connect with the AEON with the supplied tuning pads which I find helpful.

Vocals on the AEON have a brighter edge to them, with a slightly harder attack so they don’t sound quite as smooth but they do sound more forward and alive than the SINE DX. AEON’s upper mids and lower treble roll off a little less also so you get a bit more snap and energy in percussive passages and generally a high level of sparkle.

They will sound a little hotter and thinner up top than the DX and as such for extended percussive work I found them a little less forgiving. The SINE DX’s top end, though darker, is a bit smoother and more forgiving.

The Oppo PM-3 is just a little bit bigger, slightly less efficient, and weighs around 30g more than the SINE DX. It is also a closed-back planar design compared to the open design of the DX.

Though the cups and pads are slightly larger than the DX it is still essentially a largish supra-aural design so it rests on your ears a bit more. Clamping is a bit lighter and the seal is superior to the softer thicker pads. It is also a little bit more comfortable than the DX for longer listening sessions.

The PM-3 is not that dissimilar in terms of the tonal pitch but it is a little more neutral in its sub-to mid-bass response whereas the SINE DX has a bit more power and weight up to around 100Hz. The PM-3 upper bass and lower mids are a little thicker sounding in terms of instrumental timbre.

The SINE DX has a slightly more elevated mid-range though with a vocal positioning that is a little bit more forward than the PM-3’s flatter response. As such the SINE DX will sound a bit more intimate than the PM-3.

Both headphones have a rolled-off treble response that can be considered to be a little darker up top. The PM-3 shades though in terms of lower treble energy and top-end extension so it had a little bit more perceptible articulate and headroom but otherwise both come across as fairly smooth and easy-going with a lack of peaks. 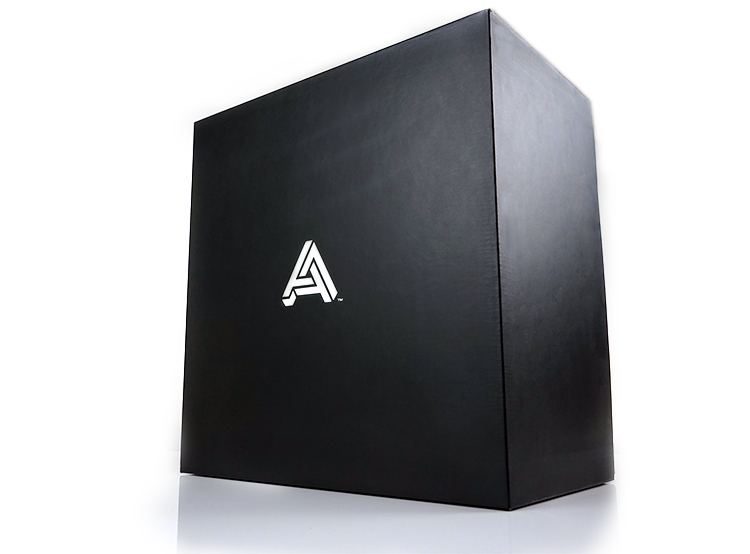 Despite some quibbles I have with the comfort I quite enjoyed using and listening to the SINE DX. I can see why the original SINE proved to be so popular with its svelte and attractive form factor, robust build quality, and generally very easy-to-drive setup.

It is probably the first Audeze headphone that I could easily envisage using on a day and daily basis despite its open-back design.

As an open-back design though I have heard more open offerings, even in the on-ear categories some closed-back designs might seem to have more headroom and air than the SINE DX. So combined with the lack of isolation you do need to figure out what tonal preference you have before picking up the SINE DX.

For me, this version of the SINE is relaxed, easy-going, and slightly dark but with fantastic low end-power and very natural-sounding instrumental timbre. I love it with EDM believe it or not, normally I would want more top-end extension but the SINE DX is so forgiving you can’t help but enjoy it.

Give it some quality amping and it will show off its potential but at the same time, it’s the only planar I know outside of the PM-3 that works quite well with modest smartphones.

Despite not having the cipher option available you can tell the SINE legacy, i.e. something that can be played by everyone, has continued with the DX.