The Oppo PM-3 is the company’s lightest and most compact form-factor closed-back planar magnetic headphone launched to date. It is priced at $399.

Disclaimer: The Oppo PM3 was sent to us as a sample in exchange for our honest opinion. We thank Oppo Digital for this opportunity.

To learn more about Oppo products on Headfonics you can click here.

Oppo PM-3
The Oppo PM-3 is the sweet spot for planar for the masses at $399. It’s a consumer-pitched headphone with audiophile sensibilities and I like it a lot.
Slide here to add your score on the gear!31 Votes
8.5
8.5
Reader's Score
Discontinued
Oppo Digital

This review has been cooking a while, it is tardy but no less relevant and it’s the first out and out PM range planar headphone review I have done despite owning all 3 (thanks to Kyle and Mike for previous reviews). I have been dying to write a bit more about the headphones from Oppo in the last year but such is my schedule I have not had a chance other than in reference work in other reviews.

Contrary to some, I think the PM-1 with the upgraded pads is perfect for what it does and whilst it is not a purists dream it was for me the planar that broke out of the power game and made a lot of Class A power amp manufacturers suddenly feel slightly nervous. If anything, no matter what you think of the sound, Oppo proved you do not need a nuclear plant or an expensive amp to drive a planar headphone to sound great.

I even started thinking about some deeper theories based on my lunchtime chats with Igor who is the brains behind the PM series designs.

Trust me those were some very long lunches last year and I am still mulling over the answer 3 PM headphones later.

So what’s the big deal about the PM-3 then? Well, in short, quite a lot actually. It was, (HE400s now from Hifiman is the same price), at the time of launch, the cheapest planar headphone on the market outside of the aged T50RP from Fostex.

This is also the lightest version yet from Oppo and way lighter than pretty much all the planar cans on the market. It is the first of the new generation of on-ear portable planars and as such a good deal smaller than your average planar.

Oppo also claims that the PM-3 is even more efficient and just at home jacked out of a decent smartphone as a high-end tube home setup, perhaps even negating the need for a desktop altogether. Yes, that was the claim on the PM-1, but this goes further. It is also a $399 closed planar – yup closed and that’s a big deal if you want to go portable.

You can almost feel the planar market react in kind to Oppo’s moves also over the last year. Gone are the memes of power-hungry, inefficient and in comes the quest for greater efficiency and drivability. Bringing planars to the masses is the new bread and butter and boutique firms are increasingly becoming more sophisticated in their rollout due to the slick campaigns such as those of Oppo.

Audeze has the EL8, Hifiman released the HE400i and just this month they started selling the HE400s which is marketed as an even more efficient version of the HE400i at priced to go head to head with the PM-3 at $399 also. This is all good for you and me, this is a sweet spot buying range for many a headphone user and it’s within the typical consumers’ realistic headphone buying budget. 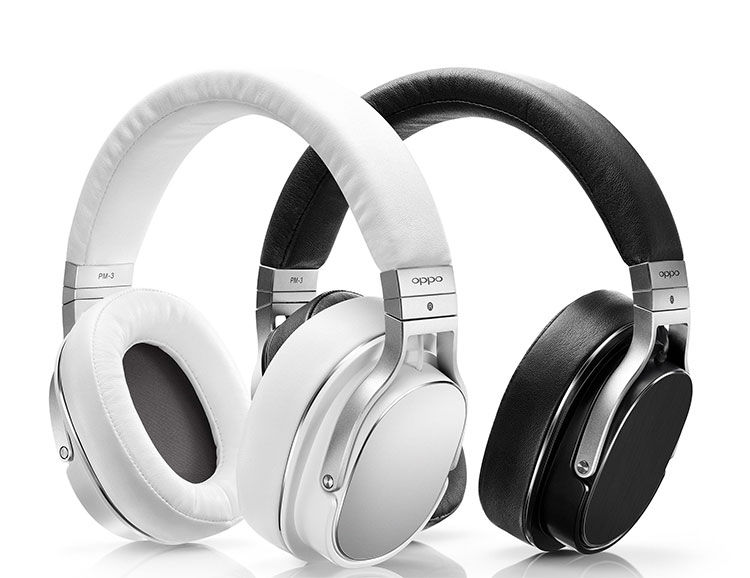 Planars could get trendy at this rate and doubtlessly Oppo are thinking that also because up until this point you had black and some more black, in fact, you could have any PM headphone you want so long as it was in black.

Not anymore because now there is white. Yup, that tried and tested ‘Applesque’ color designed to lure socialites and intravenous Starbucks drinkers into parting with their cash Fry style without rhyme or reason. It is white and you gotta have it.

Oppo has it now for the PM-3. I fondled one or two actually at the factory a while back during the testing phase. They look pretty good but I am a dye in the wool black headphone user and I hunt bears at the weekend with my bare hands, (that last part may not be true) so I passed on the white for now.

Things have got smaller and lighter in PM town also with the new PM-3. If you want portable you have to compete with the competition and as efficient the PM-1 and PM-2 were they were a good deal bigger than your average portable headphone.

Now whilst the PM-3 is no V-Moda XS it does shave a few mm off in most directions leaving it roughly the same size as the B&W P7 and just marginally bigger than the Momentums from Sennheiser. It still looks every inch a PM series planar but it is now 75g lighter than the PM-1 and that can make a bit of a difference in daily use. Technically that makes it the lightest planar headphone on the market and an attractive option for those thinking of going portable.

It’s not just the weight that has gone down but also the size of the PM-3 which is considerably smaller than the PM-1 and PM-2. Approximately 30-40% smaller in dimensions when placed side by side. The most noticeable diminution in size are the cups and drivers on the PM-3. The driver size on the PM-3 is now 55mm in diameter as opposed to the PM-1 which measured 85mm in diameter. With the housing in ratio to the driver as well as the pads the net effect is the PM-3 is now more of a large on-ear than a small over the ear headphone. 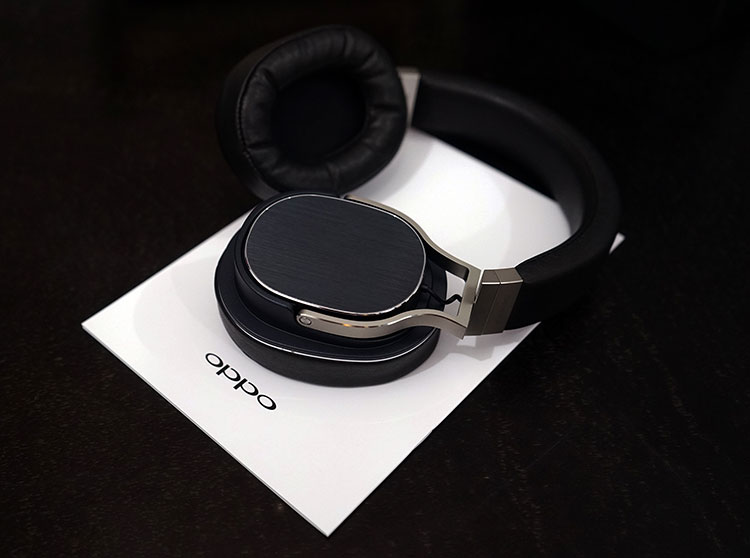 Oppo has also adjusted the clamping on the PM-3 to be that bit tighter than the PM-1 and 2 presumably to counteract the daily movement a portable user might go through when out and about as well as to increase the effectiveness of the seal.

The pads are not lambskin this time sadly you have to make do with a protein pleather type material that can and will heat your ears up and make them a tad moist over long listening periods in hotter climes. On the plus side the PM-3 seal is as tight as a duck’s ass in water I kid you not. It’s not CIEM levels, nothing will really get that close but compared to the open PM-1 it’s really a step up in isolation in every way and very comfy still at that.

I was lucky enough to drop in the factory during the final testing phase and beside the PM-3 prototypes we had the Momentums, Alpha Dog, LCD-XC and the V-Moda M100. All of these I tested side by side for seal and comfort and the PM-3 was 3rd behind the Alpha Dogs and the XC, losing out only due to the yummy lambskin and deep pads that the two closed flagship cans had.

Note both are considerably more expensive headphones and it blew away the other portable cans at similar prices or slightly below for seal and comfort. 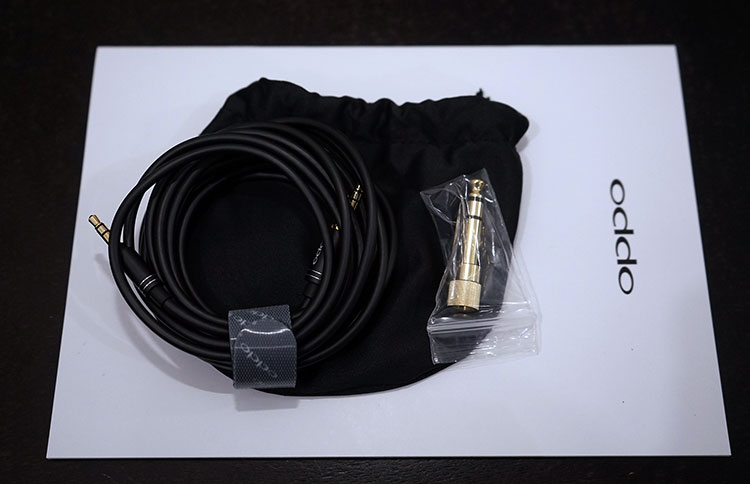 The PM-3 comes loaded with 2 cables as standard and if you order directly from Oppo you also get a choice of two more cables built specifically for use with smartphones with inline mics/remotes. The first cable is a standard 3m cable for use at the home or desktop setups where distance is a bit of an issue.

I am ok with it, it does the job but it’s not the easiest cable to manage and I would have been overjoyed if it was nylon finished rather than rubber-coated. There is a tiny bit of memory retention in the 3m cable if you keep it wound up inside the Denim carry case but nothing extreme.

The 1m cable is more akin to the short portable one you get inside the PM-1 and PM-2 package except its single-ended rather than dual given the PM-3 is a single entry design headphone. It’s a simple 3.5mm terminated straight cable designed for easy portable plug and plays with most DAPs and smartphones. The other two cable options are with inline remote/mics and come in 2 colors, white and black depending on the headphone you buy online and are also 1m 3.5mm terminated.