The iBasso PB3 Mockingbird is a new slimline portable balanced and unbalanced headphone amplifier. It is priced at $199.

Disclaimer: The iBasso PB3 was sent to us as a sample in exchange for our honest opinion. We thank iBasso for this opportunity.

iBasso PB3 Mockingbird
Whilst the PB3 inherits the avian titling series and is numbered one after the PB2 I actually think the PB3 is a slightly different bird than the previous PB series unit. Yes, it has balanced and unbalanced outputs but this time there is less of an emphasis on power and more on the tonal quality that this power is bringing to the table.
Slide here to add your score on the gear!21 Votes
8.1
8.1
Score
$199
iBasso

We had the Toucan, the Pelican and now we have the Mockingbird which is the third in the PB series of portable amps from iBasso with a focus on balanced power. This has always been a well-regarded series of amps and whilst other designs from iBasso have been discarded or discounted the PB line has stayed strong in their line up.

The analog PB3, however, is a radical design break from the previous two iterations and comes in at just $199 compared to the older $299 prices of the previous models. Previously the Toucan and Pelican looked quite ‘old-school’ and boxy. Not the PB3. The PB3 is slimline, sexy and thoroughly modern and a lot of that can be put down to the internal topology and the switch to 2.5mm TRSS from the older Hirose bulky connectors.

iBasso’s legacy has always been built on its portable amp designs yet before the PB3, the D-Zero line has been their only slimline amp series making the rest, technically capable as they are, look rather old school.

The PB line used to be boxy but then it had to be with the topology and Hirose jack stages requiring some headroom to get it all to fit. This was around 5 years ago with the Toucan and Pelican that was a design that suited most of us just fine. There were only a few slimline portable amps out there competing and the market had not been really introduced to the balanced portable user outside of full-size headphone users.

2017 is a different ball game and TRSS 2.5mm is omnipotent within the DAP market as well as going balanced on IEM’s seemingly a popular option. It has also given iBasso a strong pitch to relaunch the PB series with the PB3 using TRSS and 3.5mm balanced and unbalanced in a much slimmer and more modern design. Given the standard DAP is fairly slim, and that includes smartphones, the stacking potential of the PB3 is now much more attractive.

It is more than simply cosmetics and going balanced with the PB3. iBasso has also pitched this new design has simply having a better implementation of their BTL structure, giving it better depth and harmonics reproduction than other balanced design that they feel lacks focus on even harmonics and thus sound a little harsh in comparison.

Aligned to that iBasso also uses a low impedance supercapacitor design for superior power filtering, enhanced dynamic and better low-end reproduction without distortion. All of this is strapped onto a 2500mAh chloride ion battery with 20 hours long life. For those unaware, a chloride battery is a fairly new concept, launched I think in 2013 and is much safer in transportation than li-poly as it does not need a minimum charge setting before usage and therefore unlikely to blow up. 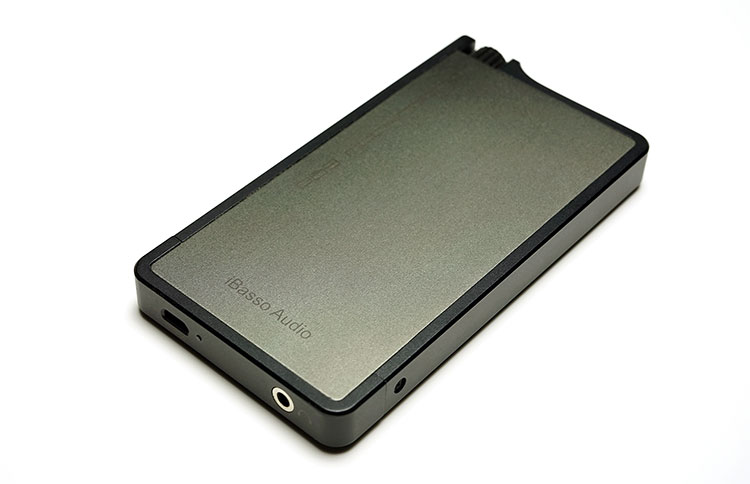 Compared to the PB2, the PB3 is about 30g lighter at 135g compared to 167g and measures in at 120mm x 63mm x 11.1mm compared to the older 100mm x 55mm x 24mm form factor. That means it is around 20% longer, 10% wider but 50% shallower than its predecessor. The decrease in height is only possible on the PB3 due to the use of a slimline chlorine ion battery as well as the switch to smaller 2.5mm TRRS balanced circuitry over the older and much bigger Hirose connections and rollable Opamp design in the PB1 and PB2.

The chassis is comprised of just 4 parts and made of CNC’ed aluminum with top and bottom plates, a front enclosure and rear plate. Unlike the older boxy style, this is smooth, rounded and very discreet with only two noticeable screws towards the rear of the side panels compared to the front and center screws on the front panel of the PB2.

It is a two-tone design with a charcoal top and bottom panel and a black frame for the panels and pot. The CNC aluminum also has a hard anodizing finish to prevent it from accidental knocks and bumps. Personally, I would stick on some tiny blister feet to be on the safe side which what I tend to do for all my portable amps to prevent from possible scraps when stacking on other metal surfaces.

The PB3 ports are situated on the front and rear panels but with a slightly awkward single-ended headphone jack position to the rear and balanced output to the front. To get to this size iBasso has sacrificed some of the more interesting options from the PB2. 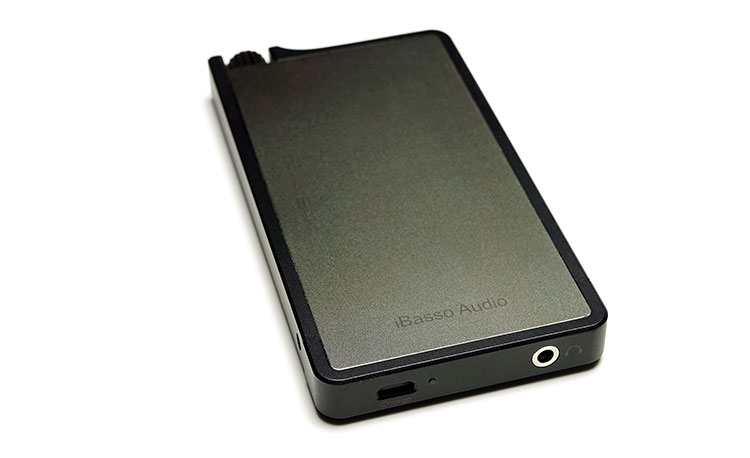 To the rear, we find a single 3.5mm unbalanced output jack and a micro USB charging port. To the front, we have the 2.5mm TRRS balanced output as well as the single unbalanced 3.5mm line-in, both of which are terminated with gold plated sockets.

Nestled in-between the sockets and the Alps pot is a two setting low/high gain switch which does not have a label for high or low sadly so for the record, left is high and right is low gain. However, those used to the PB2 will welcome the moving of the gain control to the outside of the chassis rather than have to open up the plates and manually switch the jumpers for gain control on the inside.

The PB3 is no longer a fully balanced amp. Previously the PB2 would have benefitted from the balanced output of the DB2 DAC. Since iBasso has discontinued this DAC unit so has the balanced input been discontinued also. iBasso is assuming that the majority of analog stacking setups will use an analog line out and whilst this may be probably true it is sad to see the loss of a balanced input option and the possibility with it of a fully balanced portable stacking system.

The Alps pot is protected with a raised nudge guard on either side to protect from accidental volume knocks and is ridged for better grip than the PB2 Alps quad pot previously used. It does, however, lack a volume marker on the front or any sort of volume markings which would have been useful for micro adjustment on a day and daily use.

Much was made of the PB2 value add features when it came out. The first the colossal power with a 32v swing and up to 2.5w output power for driving inefficient planars which were all the rage 5 years ago. The second was the rolling capability of the PB2 with iBasso offering 10 DIP sockets for OPAMP and Buffer rolling much to modders delight.

The PB3 is not that kind of amp anymore, but then again it is $100 less than the old SRP of the PB2. Instead, the focus is on the quality of balanced sound, with an acknowledgment that quite a lot of potential users will be considering this for use with balanced or unbalanced IEMs.

Gone is the focus on pure power, but neither is it forgotten with the PB3 being able to deliver a very healthy ≤ 480mW of output power that should drive most efficient headphones. At the same time, iBasso has improved the SNR to -120dB over the older PB2 rating of -115dB for what should be a quieter blacker background on the PB3 which is just ideal for IEM users. Sadly, I do not have the old THD specs but given iBasso’s focus on improved harmonics performance you would have to believe they have improved the THD specs somewhat over the previous model.

Since this was an advance unit the package was rather sparse with only the unit itself coming. However retail wise you will be glad to know it does indeed come in a box and includes similar types of accessories to the D14 (minus the DAC OTG cables) including a soft drawstring black pouch, a rather thick and slightly long 3.5mm to 3.5mm IC, a USB charging cable and 2 rubber bands for stacking purposes. 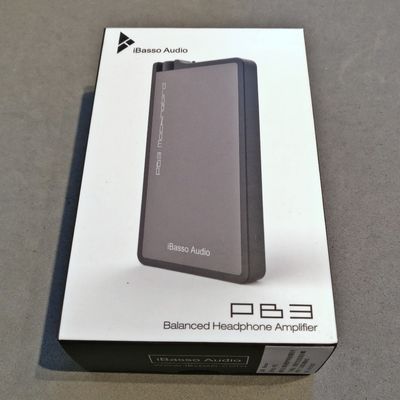 packaging & Accessory pictures above come courtesy of nmatheis of Head-fi.

When iBasso spoke of a focus on the 2nd order of harmonics in their PB3 design they were not messing around. Aside from its excellent resolution, the PB3 is nothing like the D14 in terms of tonal presentation. It has a very smooth and enticing tonal response rather than the leaner and more expansive performance of the D14. It also offers a very good low noise level, with a black background on the most efficient of IEM’s even compared to pricier portable amps pitched squarely at the IEM market.

In comparison to a number of amps tested the PB3 has an evenly balanced presentation with a nice midbass snap, reasonable depth as well as a fairly open sounding mid-range with smooth and natural-sounding vocals.  The PB3 treads a fine balance between clarity and euphonics with a natural to slightly warm sounding instrumental timbre, but with just the right level of detail and definition to stop it from sounding lush.

Treble was in no way harsh. Instead, it was quite smooth sounding actually with a tiny bit of roll-off in the very last octave so it didn’t sparkle quite as much as the RX from ALO Audio preferring instead to deliver a more relaxed and easy to listen to sound. You can tell this is an amp with a slight even harmonics bias.

That being said the PB3 is transparent enough to be tipped one way or the other depending on what source you use so warmer DAPs such as the new FiiO X5iii will add a touch of low-end impact and slightly less resolution and extension than the new iBasso DX200 reference amp’s more neutral and cleaner signature. The Sony PCM-D100 combined with the PB3 will give you a bit more warmth than the DX200 but will sound much flatter than either of the two DAPs mentioned.

Aside from the increase in power and gain, balanced mode injects a bit of snap and sub-bass presence into the PB3 presentation. It is still fairly balanced but now has a slightly more vivid feel to its midrange and a thicker note particularly the overall bass response which tightens up considerably on IEMs such as the A91 from Fidue.

This is an IEM that needs good current to get the best out of its dynamic driver and produce some seriously excellent sub-bass performances and the PB3 delivers. If anything balanced it just a bit more “in your face” compared to the unbalanced output which has a slightly more neutral “standoff” staging across the board.