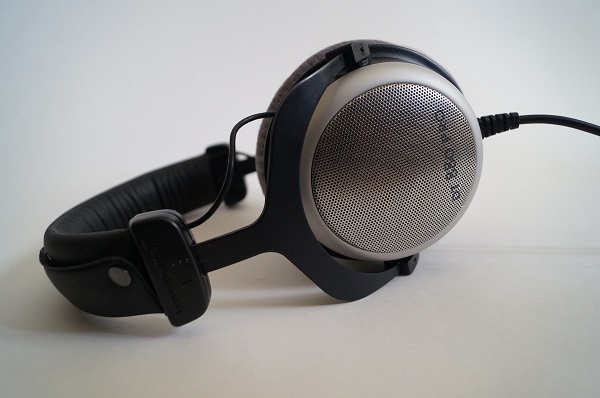 The DT880 Pro by Beyerdynamic

From what I’ve seen from various impressions of the DT880, if a pair was put in a room for a group of people to listen to and write down impressions, very few would completely agree with each other. Some say the treble is too peaky, others find the treble’s forwardness perfect. Some think the mids are recessed, others believe it wonderfully balanced with the rest of the spectrum. Some think there’s not enough bass, others…well you get it. My point is, if there’s ever been a headphone that encapsulates the fact that we all hear differently, it might be the DT880.

My initial impressions of the DT880 weren’t all that favorable. Compared to my other headphones, I was sorely missing the midrange, and I thought they were too trebly, even for me (For some reason, I appreciate my Sony SA5000 even though many people think they’re treble daggers). After adapting to the sound, and using an amp that paired better with them than my old Millett Minimax, an Alex Cavalli-designed EHHA, I’m liking the sound more, but it wasn’t quite enough for me to keep them. So, before I pack this up and ship it to a very lucky man in California, here’s what these sound like to these particular pair of ears.

The DT880’s bass may be a step down in quantity from people coming from bassy closed headphones like the Audio Technica M50, but to call it bass light is definitely a stretch, at least with the DT880 Pro. While it’s not the boom-bass some people expect bass to sound like, it definitely has some heft, especially compared to the SA5000 and AKG K702. It also has good range, easily going down to 20hz, but it does get a bit sloppy past about 50hz. Though, to be honest, the DT880 wouldn’t be my first choice for anything electronic that’s bass driven. It’s objectively quick, but not as fast as my SA5000, and for some reason, it doesn’t sound as fun; it sounds too clinical and serious for me to really enjoy any type of synthesized music with them. Even acoustic music sounds a bit soulless to me.

While the DT880’s midrange isn’t recessed like I originally thought it was, I do wish it were a little more forward to make the sound a little more engaging. But since I can’t really change that without modding them, I’ll describe it as it is now. The midrange is a bit more forward and realistic than the SA5000, but less detailed. I actually understand people saying that it’s neutral; most other headphones are either mid-forward or recessed in comparison to the DT880. I’d struggle to call it recessed, because it isn’t; it’s out in full force, but there’s just more treble and slightly more bass. It has pretty good timbre, but is a step behind my ZMF T50RP in decay. But unlike the T50RP, I don’t really find any issues with the upper midrange. There’s not all that much to talk about the midrange, but that’s because it doesn’t really do anything blatantly wrong. But for my tastes, it doesn’t really do enough right, but I’m a crazy midrangehead that likes wooden Audio Technica midranges (The W10VTG is currently on my head for example), and the DT880 is too neutral to satisfy me.

The treble is a bit of a peculiar to my ears. I’m one of the many who believe it’s a bit on the harsh side, but the amount of discomfort I feel depends on what I use to drive it. On my Minimax, it was fatiguing, but with the EHHA, which is actually brighter, it was not nearly as bothersome. For kicks, I tried plugging it directly into my Samsung Galaxy Note 3, and I thought it was about as bright as it was through the Minimax. Through my Audio-GD SA-31,which is a good bit warmer than the EHHA, the treble was more tamed than with the EHHA (no surprise there), but it also sounded even less engaging than it already did as a result. But no matter the source, even the Note, the treble was quite detailed, but not as detailed as the SA5000. (The rest of this section is through the EHHA). Cymbals weren’t as harsh as expected, and their decay was quite decent. I was still tempted to EQ it down a bit, but it wasn’t nearly as bad as the Beyerdynamic T5p’s I borrowed (No don’t expect a review, at least for now. I hated them so much that I want to buy a pair of my own because I couldn’t believe how disappointed I was in them and want to give them a second try with a different pair). There are undoubtedly peaks though, and they started to fatigue me after a couple of hours.

Being a semi-open design, I didn’t expect the spectacular soundstage of the K702, but the DT880 was still capable of providing a convincing soundscape. Width paled in comparison to the K702, but I thought their depth was pretty similar in magnitude. There is something in the treble that created a strange resonance that never allowed me to forget that I was using a headphone though, which is slightly disappointing. I thought imaging was passable; I was somewhere between my ZMF and SA5000 in terms of pinpoint accuracy, which isn’t so bad considering how much cheaper the DT880 is compared to the SA5000.

All in all, for the $150-$200 that the DT880 is currently going for, it’s simply fantastic that something so neutral is available for (relatively) such little money. Its neutral sound signature is a bit of a double edged sword though; in trying to be neutral, I perceived it as kind of boring. It does not attempt to engage the listener, it just presents the music in a way that, to me, was Beyerdynamic’s attempt at providing a means for the listener to most easily dissect the music by avoiding to hype too much of any frequency (other than treble, which Beyerdynamic seems to like adding to most of their headphones).

Somehow, in the pursuit of neutrality, Beyerdynamic created a headphone, to me, that sounds like a tool and not like music. Sadly, it didn’t work for me, but I wouldn’t necessarily view that as an objective con. I’m sure that the DT880’s “correctness” is exactly what many want in a headphone. But I guess I’m weird in that I don’t mind taking a bit of a hit in objective correctness if a piece of kit allows the music to emotionally move me, which seems to involve a bit of color. Regardless, I sincerely hope that if Beyerdynamic attempts to replace the DT880 with a Tesla-based headphone, they keep the treble exactly at the level it currently is, as once my tastes change, I have no doubt that I’ll want something like the DT880, but maybe a little more midrange body and energy.