EarSonics’ flagship is equally tuned to approximate a neutral signature, and shares a similar overall clear and airy sound to Apollo, although its signature can be considered more U-shaped. Both share punchy bass with a good balance between the sub- and midbass, and no mid-bass leak to the midrange. As such, they both have a clear background, void from warmth. Apollo has a slightly fuller midrange, and better ability to create both thin and thick notes; the S-EM9’ notes are on average thinner. Apollo’s midrange also has a bit more of inherent warmth, and slightly more prominent center mids. As such, male vocals have better depth and size with Apollo, although the differences even out with female vocals. The S-EM9 on the other hand has the edge when it comes to treble; there’s a slight lift in the lower treble, and the S-EM9 can be considered very slightly U-shaped compared to the flatter Apollo. The S-EM9 has a bit more sparkle, but overall differences aren’t that big. While transparency is about similar, the S-EM9’s treble gets the edge in extension.

Apollo is a fuller sounding unit; with the S-EM9, vocals and electric guitars sound a bit thinner in comparison. But due to better treble extension, the S-EM9 has slightly better resolution; edging the Apollo out in midrange definition and detail. But overall, their tonality is more similar than different. The soundstage is where they depart: both are very airy, but Apollo’s is noticeably wider and deeper. But there’s a clear tradeoff here – for fans of sheer size the Apollo will be the easy choice; the S-EM9’s on the other hand might be more intimate, there is more precision within the stage.

Rhapsodio’s balanced armature flagship also sports a 10 BA driver design; but due to the choice of bigger midrange drivers, the Solar is noticeably larger in size. In contrast to Apollo, the Solar drifts far from neutral; it’s enhanced mid-bass gives size and warmth to the presentation. Apollo’s bass is cleaner, with slightly better sub-bass extension. The enhanced mid-bass of the Solar gives it a powerful punch when called upon, although it can be interfere more with the other frequencies; some might find it too overpowering. The Solar’s full lower midrange gives male vocals depth and size, although Apollo’s relatively more forward center mids gives them slightly better density and clarity. Both have very airy treble, with a similar quantity in sparkle and speed – but the Solar’s has a warmer tone, compared to the clearer sounding Apollo.

Both have a wide and airy soundstage, but due to Apollo’s cleaner mid-bass presentation, Apollo has an airier sound; Apollo’s stage is also deeper. In accordance with its mid-bass, the Solar has thicker notes, while Apollo has more flexibility in average thickness. The Solar’s thicker notes also take more space in the stage, contributing to the wide feel of Apollo’s stage. Compared to the Solar’s warmer mid-bass presentation, Apollo’s cleaner stage aids in separation; the Solar in turn has more precise imaging, one of the Solar’s outstanding traits.

Designed on the same table, Apollo and Zeus undeniably share similarities, while having their own differences in signature and ability. Zeus’ bass has slightly more impact, and is overall more resolving, bringing out extra details in bass lines Apollo might miss. Zeus’ midrange was never intended to be neutral; its forward presentation is stimulating, powerful and highly detailed. The combination of the more prominent lower and center mids gives Zeus the edge in vocals – they sound powerful and clear, with greater depth and emotional articulation. Apollo’s midrange has a more neutral tuning; while still being slightly forward, it’s more in between laidback and forward compared to Zeus. But due to Zeus’ relatively forward midrange, Apollo’s finds more balance between the midrange and treble. Both share a refined treble tuning, with a slight dip in the upper treble for a smooth sound. But Apollo’s mid treble tuning gives it an airier sound, with just a bit more sparkle.

Due to Zeus’ mid-centric signature, it isn’t particularly airy, or does it have a very wide soundstage. Again, here they depart: Apollo’s soundstage is noticeably wider, compared to the relatively narrower but taller Zeus. While both have good depth to the soundstage, Zeus impresses with its layering. But Zeus’ treble has the better extension and when it comes to technical ability, is a step ahead of Apollo. Transparency, resolution, and imaging – here, Zeus is in a class of its own. 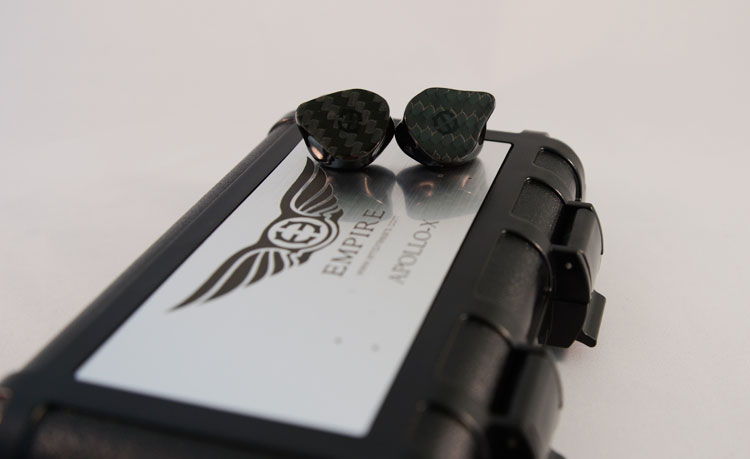 Due to Apollo’s relatively low impedance, it can be easily driven to volume by any source. That begin said, it will scale up nicely with a good quality source. Especially key features as its soundstage dimensions, resolution and imaging tend to improve with better sources.

With an iPod nano for instance, a sacrifice is made of bass depth, impact, and texture. Apollo loses two of its key features, its clarity and soundstage. Instead the atmosphere is warm, and the soundstage suffers noticeably in width and depth – the overall space is severely reduced. In accordance with the reduced mid-bass, the lower midrange is distant; vocals lack depth and size. In turn the upper midrange is relatively more pronounced. The treble on the other hand becomes splashy and uncontrolled. In case this isn’t clear yet – this is not a combination I can recommend in good conscious.

The M8 has a more musical presentation, but feels generally restrained – like its holding back. There is good coherency on the stage, although the overall space is still a great deal smaller than a quality player. The bass is still low in rumble, while the upper midrange is relatively more enhanced putting more emphasis on vocal articulation from the mouth rather than the throat and chest. Treble is more in line with the overall presentation, but comes across as a bit dull. In case of say a battery-related emergency I might be able to listen to this for a while

When listening with the 901S, Apollo’s bass is fast, tight and clean; the relatively neutral bass gives Apollo a very clear background, almost void of all warmth. Apollo displays speed and quick decay, and an overall dynamic sound – the 901S’ specialty. Apollo sounds very balanced between the lower and upper midrange, with a nice shimmer in the upper frequencies, though overall Apollo wouldn’t classify as an overly sparkly monitor – it simply isn’t in the intention of the design. Vocals sound clear with a pronounced articulation, although there is a slight tendency for sibilance in some occasions. The pairing is nice; Apollo shines in its neutrality, with a clear background that aids in separation and detail retrieval.

The Plenue S is slightly warm over neutral, and Apollo’s signature tilts a bit towards mid-centric although it remains close to neutral. The mid-bass is slightly more pronounced, allowing the Apollo to create thicker notes compared to the leaner 901S. Since the Plenue S’ background is blacker than the 901S, Apollo’s sound is darker and slightly less transparent; but the Plenue S gets the upper hand in resolution. Instruments have better definition, but set against the dark background detail presentation is still less obvious and upfront than with the crystal clear 901S. The technical differences in resolution and transparency are slight though. But Apollo feels at home connected to the Plenue S: its stage is at the widest, with instruments fanning out on a deep and wide flat plane. And that’s just single ended. When Apollo is connected with a balanced silver litz cable, the stage gains in overall size, precision and resolution; a finishing touch that lifts it to a higher level. If you happen to have a Plenue S and a balanced silver litz cable lying around, I’d highly recommend trying this combination.

Apollo is a unique earphone that impresses with macro presentation: its general tonality and soundstage dimensions. Versatility is its forte; its neutral signature doesn’t discriminate against genres, while its ability to recreate both thin and thick notes allows electric guitars and vocals to sound full, while sounding thinner for acoustics and string instruments as well. This basically means you can throw anything at Apollo and it will always sound good. I tried to wear it down with rock, vocals, pop, EDM & hip hop – I even went out of my way with some classical and jazz, but Apollo demonstrated resilience and perseverance, and held its stance. I find the term ‘all-round’ is easily (mis)used; even when vocals lack depth, or treble is piercingly sharp.

Brace yourself, here it comes – I find Apollo to be very all-round; one of, if not the most, all-round within my collection. That being said, I personally use it most for female vocals and electronic music (specifically darker minimal techno or electro if that is of interest). But I don’t feel the need to take a second iem with me when I’m out, just in case I have an emergency need for a completely different type of music (like I usually do). Yes I’m particular that way.

Its unique soundstage impresses with size and airiness, but comes with a side note; the diffusion of instruments on the wide stage can affect its definition and focus. This is where Zeus demonstrates who is the one true ruler of Olympus. Imaging, resolution and layering – that’s where the $500 difference comes into play. On the other hand, this will probably be more noticeable for critical listeners, than the casual listener putting on some tunes to kick back. Zeus is forward and stimulating in its presentation, the bold leader that goes up front. Its strong personality differentiates it from the herd – but its mid-centric tuning also makes it a bit more of a specialist.

Apollo’s neutral tuning makes it more all-round, and earns it its place alongside Zeus; there simply aren’t any constraints on which genres it can play. They’re both is unmistakably from the same stable: both share a clear background, excellent instrument separation and refined treble. But their signatures vary, and determine their applicability. Apollo differentiates itself with its versatile signature and vast soundstage, and will appeal to its own crowd by doing so.