The PW Audio Monile is a mixed 26AWG ultra-purity copper and 25.5AWG super-purity silver 4-core aftermarket IEM cable. It is priced at $551.99

Disclaimer: The PW Audio Monile was sent to us a sample in exchange for our honest opinion. We thank PW Audio and Musicteck for this opportunity.

To learn more about cables we have reviewed on Headfonics you can click here.

Please note this review follows our new scoring criteria for 2020. You can read more about this here. 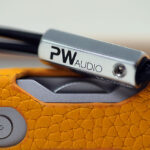 PW Audio Monile
Overall, the PW Monile is a competitive cable and a memorable tweak in terms of tuning with some of my favored IEMs. It is distinctly different from some of the competing offerings within the same price range.
Slide here to add your score on the gear!20 Votes
8.4
8.4
Reader's Score
$551.99
Musicteck USAPW Audio

We round out the year for cable reviews by revisiting a high-profile brand we actually started 2020 with, PW Audio.

Their competitive No 10 Anniversary cable was not only our first cable review of 2020 but our first from PW Audio officially. I say officially because I have a personal unit of their popular 2-wire 1960s for a few years now as well as the Stormbreaker version inside the Empire Ears Odin packaging.

The Monile is their latest cable to land on our desk and it comes via Musicteck. I bring their name up specifically because it seems to be one of those cables the dealers have but not actually advertised on the main PW Audio website.

That places it in direct competition with some of the big-name cables from the likes of PLUSSOUND, Effect Audio as well as sit just above their existing Vanquish scale series such as the Saladin. 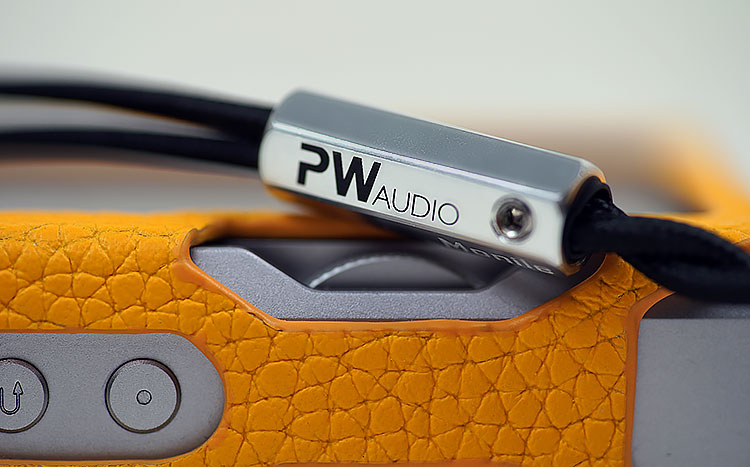 The Monile is closer in spirit to the 1960s with its coaxial conductor geometry using a combination of 4-core 26AWG and 25.5AWG gauge wires compared to the larger singular 24AWG of the No 10.

26Awg is a fairly light strand composition in terms of threading size with an approximate 0.405mm diameter and 62.7 turns of wire before we begin to speak about any insulating depth. 25.5AWG is a slightly bigger wire and you will notice that if you compare it to the 1960s which feels slightly thinner as it is using an all 26AWG composition.

The wire split is 26AWG ultra-purity copper and 25.5AWG super-purity silver rather than any single SPC or alloy type single combo wire. I can only presume the ultra and super refer to N values with the copper a slightly lower value and the silver potentially a high percentage 6N and both OCC wire, (Ohno Continuous Casting).

The Monile uses that classic PW Audio soft black cotton jacket with PVC insulation inside complimented by their signature silver aluminum splitter, jack barrel, and 2-pin connectors. If you have ever handled the Century Series cables such as the 1906s or 1980s then it is basically the same aesthetic and finishing.

This is a heavy contrasting look to cables from the likes of Effect Audio and PLUSSOUND who use transparent PVC type jackets that show off the wire in all their glory. This one comes in black, no matter what cable is inside.

It does create an entirely different vibe, almost old school in a manner of speaking but I say this simply because these types of IEM nylon cable finishes were very popular about 10 years ago.

The silver aluminum hexagonal long barrel for the splitter combined with the seamless fitting aluminum chin cinch is a perfect visual match for the slightly thicker hexagonal silver barrel.

The key difference aside from the size is the lightly branded ‘Monile’ moniker on the side of the splitter whereas both barrels have the same fine printed PW Audio logo to the fore. All PW Audio cables have a serial number and for the Monile it is on the back of the splitter in a light white print.

One big design change for this version of the Monile is the lack of transparent heat shrink wrap that I normally see around the jack barrel termination. That does make the finishing on the cable a whole lot cleaner and more professional looking than before. 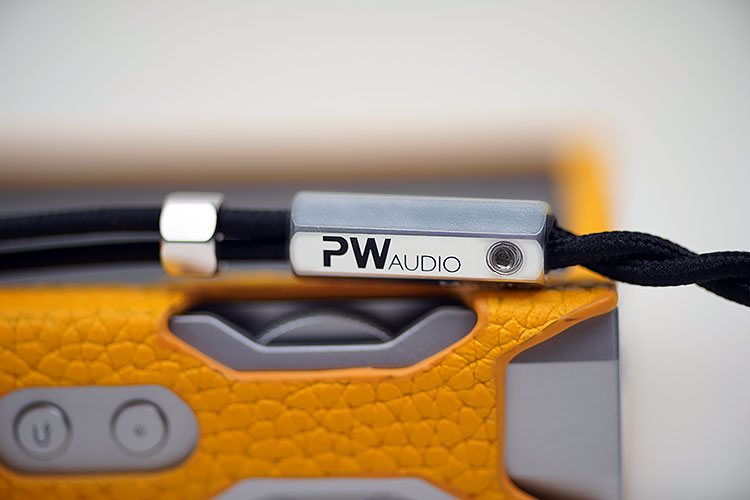 With this type of soft cotton finish and the tighter wiring, PW Audio has managed to create a fairly tight braiding sequence with a short throw on the Monile’s finishing.

It is not as supple as a pure PVC jacket for handling but there is no memory retention to speak of. Rather, it simply unfolds straight as you like every time you go to hook it up. The articulation is very consistent so do not expect any tangles or kinks in the wire action.

The deadening from the Monile soft cotton jacket and aluminum splitter is excellent with next to no microphonic noise from knocks below the splitter.

You might get a little more friction noise above the splitter but that depends on the monitor you are using. I tend to find custom IEMs with their 100% passive noise isolation would pick up small movement on most cables above the splitter and the Monile is no different in that regard.

For avid users of a chin cinch, the Monile aluminum adjustable cinch is very smooth on the jacket and surprisingly, for such a smooth action, it is not that loose either so it will stay in the position you want it. Even if super tight under the chin it stays solidly in place.

PW Audio uses a fairly long springy memory wire coating on the Monile which looks a little ungainly but actually, it is very soft and does not apply any pressure on your ear. In fact, I suspect the supple silicone hook material is comfier than having the cotton rub on your ear. 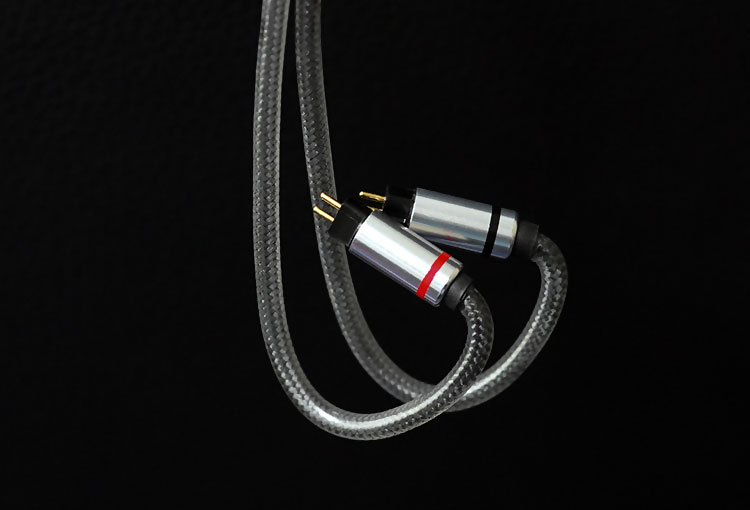 Our Monile sample comes with a 2-pin 0.78mm tellurium copper pin and chrome alloy connector and a 2.5mm TRRS proprietary jack system. However, via Musicteck’s checkout, you do have more choices of termination. Finishing options also include 3.5mm TRS and 4.4mm for the jack and or the connectors, you can pick 2-pin or MMCX.

All barrels have a fairly legible channel marking system with a black ring near the top for the left channel and a red ring for the right channel. The strain relief is very low profile, nothing bulky or unsightly with the vast majority housed on the inside of the enclosure. 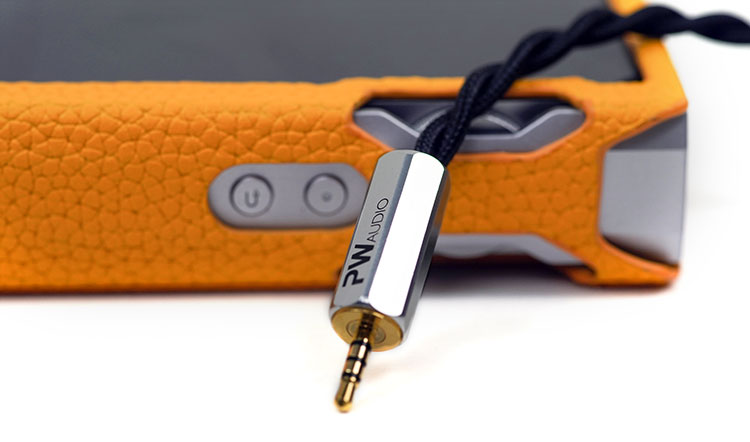 Regardless of jack termination, the jack barrels are unchanged and they do use a fairly broad gold-plated base to allow for varying sizes of jack poles to fit in. Just to note, if you have a fairly tight PO layout on your DAP or portable amp, the PW Audio barrels do take up a fair amount of space. 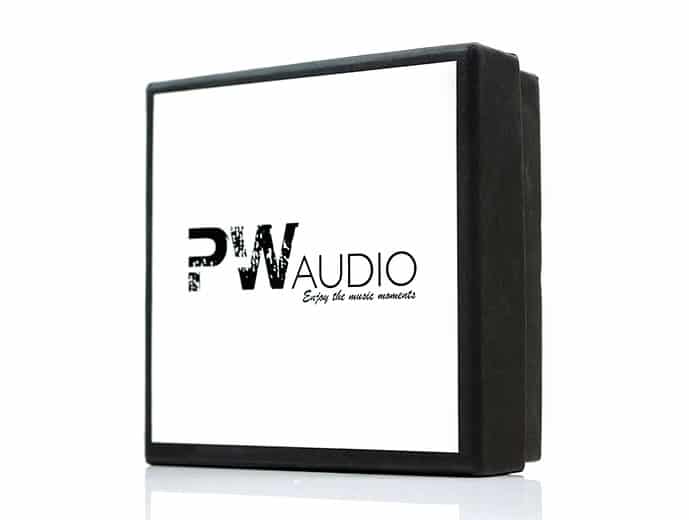 Sadly, we did not get the full accessory or packaging lineup for our review sample but discussion with PW Audio the external packaging and some of the included accessories are the same as the No 10 which we reviewed earlier in the year.

The Monile has a fairly simple package and consistent with the majority of mid-fi PW Audio creations. You get a small branded cardboard square box with a circular foam cut out inside holding the cable.

That means a degree of familiarity for PW Audio fans but also a slight wish we could have seen something a bit more premium for the price jump from the No 10.

The accessories include a silicone drier and a good quality branded mesh-lined black velvet pouch with a drawstring. You also get a clip-on tanned leather cable organizer with white stitching but I would much rather have seen a black version of this strap to tie in with the black theme of the cable and pouch.

The Monile has an unusual tweak to the majority of my IEM pairings with a considered focus on elevating the extreme ends of the frequency response of our paired IEMs. Certainly, the dynamic range is much better than stock cables and you will get some excellent separation, particularly in the mids and highs.

With the likes of the 64 Audio Nio and Trio, the sub-bass was a lot more responsive, dynamic, and fuller sounding than 2 of the competing cables we compared the Monile to, namely the Effect Audio Cleopatra and PW Audio’s own Saladin.

At the same time, the Monile pushed down a little more on any mid-bass warmth than those two cables so it can often sound fairly neutral and clean but when the audio signal dips low the Monile picks up a lot of that energy.

That unique response sometimes works really well for me when I want that low-end weight and power but not so much bloom creeping into the mids. Here, the Monile does well to retain that level of separation.

The cable that came closest for the excellent sub-bass response in our compared cables was the PLUSSOUND Tri-Copper but it also carried a more sustained mid-bass warmth and richness right up into the mids which is unsurprising given its entirely copper composition. 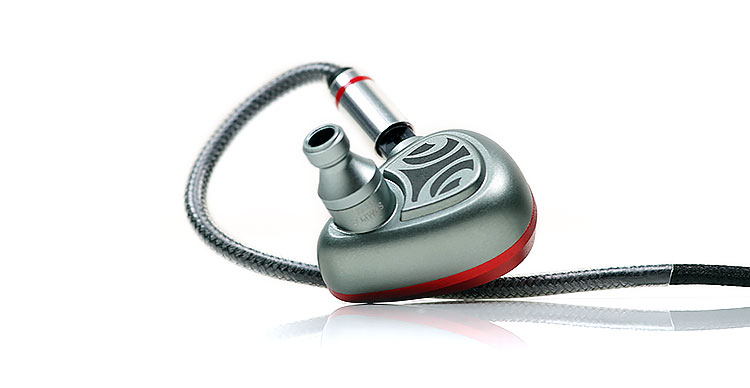 The timbre is not all ‘low-end’ bounce though. The Monile will inject a bit of energy and zest into the treble and with the Trio, this altered the midrange timbre significantly compared to the stock cable as well as our comparison choices.

The Monile does not make IEM’s brighter per se, but rather a little cleaner, more articulate sounding, perhaps due to the pure silver. Now the Cleopatra is also pure silver but it does sound a lot smoother and more liquid in comparison so it is not something as basic as raw material choices here.

The resulting energy can be felt in the midrange and vocals with a clean and light tone but not necessarily a reference signature or a dry sounding tweak. There is just enough warmth from the low-end to keep the Monile pairings timbre on the natural side compared to the more linear PW Audio Saladin for example.

With the MMR Gae Bolg pairing, for instance, the overall effect is a lot more neutral-to-natural sounding than the stock cable which comes across as a good deal warmer and softer in its instrumental and vocal timbre. It also strips out a bit of that mid-bass bloom and tightens up and accentuates the treble performance so it gets a thumbs up from me here.

I have to say the Monile does enhance the perception of depth and again, particularly so with dynamic driver infused low-ends. You do also get a clean well extended treble presence where one exists. If your monitor does well with treble, the Monile will tease that out without making it sound sharp or brittle.

You do not get the same full-bodied midrange as some of the competing cables below which may alter your impression to that of a neutral midrange in terms of positioning. I personally think the positioning with the Monile pairing is fairly similar it just that the cable lacks that lush full tone from the likes of the Cleopatra and the Tri-Copper that seems to enhance midrange presence.

Separation and clarity are excellent and that may well be due to the lack of enhanced warmth from the mid-bass and lower-mids coming through and allowing already dense and warm sound signatures such as the Gae Bolg or ItsfitLab Fusion to sound a bit cleaner.

Click on page 2 below for synergy pairings and select comparisons