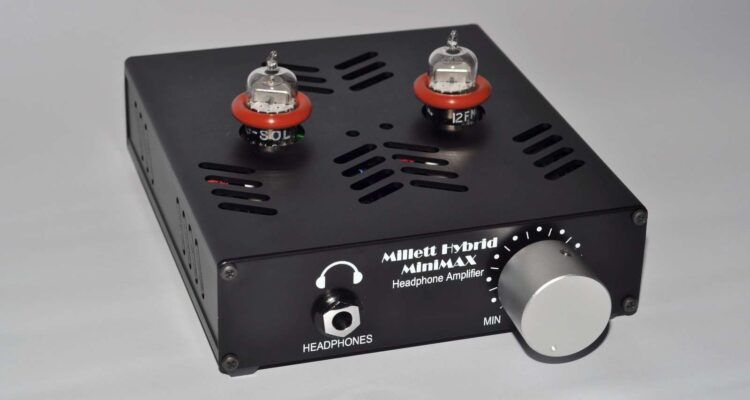 The complete kit consists of the PCB and all transistors, resistors, diodes, LEDs, one pair of tubes, heat sinks, screws and screw mounts, jacks, potentiometer, enclosure, power supply, trimmer adjustment tool, and digital multimeter—basically everything except heat shrink, wire, solder, and the iron. Delivered via Johnny Air Cargo. It was a heavy bugger. Arrived in a big brown box containing four USPS boxes from Mouser, all properly labeled and sorted according to their arrangement on the schematic diagram. A fifth box from Triad carried the huge 120V wallwart.

I properly matched the transistors before soldering them, and adjusted   them before the voltage regulator draw, ending with biasing the tubes for each of their voltage draws.  The case design does not allow modifying the transistor and power supply trimmers from the outside, only the tube bias, where holes are provided as you can see in the picture.

With ample preparation time I finished matching transistors and populating the PCB in about six hours. Wiring took two hours, and assembly plus adjusting the trimmers, one hour. I used a 12 square inch medium density fiber board easily found at Daiso (P88) stores. Solder is regular 60/40 flux core. The iron I used was a NewStar 30watt gun-type that has a button to temporarily increase the power to 70watts. I used a stainless steel pot scrubber (the meshy one) for cleaning the iron tip in between hits. Wires were from Alexan Megamall. Solid 22 gauge silver plated copper wire served as jumpers on the PCB where required, and 15-strand 22 gauge SPC as signal wires.

There are the three tube options for the MiniMAX:

The 12AE6 are the high gain tubes (12) that are suited for high impedance headphones. They are the punchiest, most bassy, and overall badass slammin’ tubes.

The 12FK6 have the lowest gain (7) but have the airiest presentation and reveal the most details. They are suited for low impedance headphones.

Just rolled into the 12AE6 tubes, having an amplification factor of 14 (actual value reduced by 2-3).

Suggested for high impedance cans (which I have none so far), these tubes indeed are “punchier” than the middle-ground 12FM6 (factor 10, actual <). They don’t sound as smooth as the previous tubes, though. Give it a song with a lot going on in the lower registers, and you get chaos. For most electro-pop, these tubes make the bass downright enjoyable, if not overwhelming. Not so noticeable for pre-loudness war songs, at least for me. What is noticeable generally is that the music seems to want to jump out and claw into your ears. At higher volume levels, it starts to get messy, but no loss of fidelity. With the HF2’s (standard 32 ohm impedance for Grados), I can’t listen to most music over the eleven-o-clock position. These are definitely the high-gain tubes. Mean tubes. I think these would drive HD600s or 650s (300 ohm) just fine.

These turned Alumigany into a mean girl. A little more burn in and let’s see if these tubes clean up their messy acts.

Some observations with the new 12AE6 tubes…

Upon powering on the MiniMAX, I test the tube bias using a digital multimeter, and the reading starts at about 25V and above. This value is high and is responsible for the quick heat-up of the tubes. This is also the purpose of the relay-delay circuit on the PCB, because without it, if a headphone/speaker is plugged in while starting up, a nasty surge of some sort can blow the cans. Which is why I only plug in headphones after about a minute, just to be safe.

I’ve tried using the old unbranded Koss cans while turning on the unit, and so far the relay-delay does its job well. As soon as I press the power button, there is no sound whatsoever. No strong pops or anything, but just a little click after about 15 seconds, which is when the tubes start glowing. By the way, the relay-delay circuit used in the MiniMAX is a simplified version of AMB Labs’ epsilon12.

After five minutes the voltage per tube settles down to 12.80 and decreases slowly for about 30 minutes. Last night I remember setting these at 12.20. These tubes have been fired up only last night, so I’ll give them a few more days.

This is a good way of measuring if the tubes are properly burned in already. The faster the voltage settles, the better.

I think the 12AE6’s are fully burned in, and now they’ve become too punchy for me.

For a bassy can like the HF2 on some tracks it can get too warm.

I think these tubes are the ones for my HF2s. A tie breaker between this and the FM will have to be done to determine the clear winner, although there is definitely more air and that means better high frequency extension. Loving the sweetness these tubes give my Grados! Can you spell eargasm?

The AE6’s will be kept until I get myself a high-end Senn or other >250 ohm can.

12FM6 for when i need a bass trip. Bass from the FK6 has significantly less impact than the AE6 but no doubt it’s still there, deep and tight.

The 12FK6 are the most revealing tubes for this amplifier. If the 12AE6 are unforgiving in terms of slam and dynamics, these are unforgiving in detail and extension. The background hum on tracks that have it are clearly heard, but for well-recorded/mastered/engineered albums, it is dead silent.

Took this bad boy out of the case for a spring cleaning of its guts. Clipped some extra long leads underneath, used MC cleaner to rub off leftover flux, and wiped clean with a microfiber cloth.

I tried using the stock Triad AC adaptor again (with a 60W 220V to 110V converter), but the VREG still doesn’t go higher than 24VDC (it should be 27VDC optimally) no matter how high I turn the trimpot. So that means I’m still stuck with my huge 4 amp 24VAC power “box”.