The Bluetooth functionality of the xCAN does indeed use a DAC but it is limited purely to decoding the wireless signal into the analog domain. It will not act as a USB-DAC and it is not to be confused with the xDSD’s more wide-ranging Burr-Brown PCM1793 feature set.

The DAC is listed as a Sabre DAC but it is not clear which DAC chipset form that family they are using. I presume it is a mobile variant like a K2M version to help retain good battery life.

Decoding wirelessly the xCAN will offer 44.1/48k 16-Bit (AAC, aptX, aptX LL and SBC). I do feel they missed a trick here by not offering LDAC compatibility which would have been ideal for modern day smartphones. I do also recognize that the separate decoding by the dedicated Sabre DAC will enhance the dynamic range of the audio playback significantly over an integrated version, even if it has LDAC.

However, what a winning future proof feature it would have been if the xCAN could have done LDAC with that dedicated Sabre chip handling decoding duties.

Shifting through the technical documentation on the xCAN will lead you to the actual dual mono amplifier design and opamp designation. It turns out that it is more or less the same as the xDSD with an OV4627 amplifier chip (4-channel) implementation.

iFi Audio describes this as a customized ultra-low noise FET input Op-Amp though based on what stock amp it is not clear. Perhaps it is based on the TI OPA627, perhaps just a coincidence the numbers match. What we do know is the implementation is both unbalanced and dual mono to allow for the S-Balanced tech (3.5mm 4-pole) to work.

The implementation and output configuration has drastically changed. This is a very powerful portable amplifier compared to the xDSD output using the same dual-mono opamp setup. Basically, iFi Audio has ‘unleashed the beast’ with 1mW into 32Ω balanced and 600mW into the same load S-Balanced (unbalanced).

The xCAN also retains IEMatch technology within their amp stages rather than a dual output similar to the older Nano iDSD BL setup. This should help keep the noise floor considerably lower with that additional power.

As a pure headphone amplifier, the xCAN is demonstrably superior to both the xDSD and the Nano iDSD Black Label in terms of noise floor and power. Even with sensitive IEMs, it is the first thing you will notice when you turn on the xCAN, just how quiet it is.

Now in terms of tuning the xCAN does not stray too far away from the xDSD’s core sound signature. That means a fairly neutral timbre, a snappy low-end, good vocal presence and a treble performance that has more presence and extension than the Nano iDSD BL but does not sound as forward as the FiiO Q5 for instance.

However, moving into the technical domain the xCAN is far more expansive sounding to me, particularly if you are pairing it with a very capable line-out from a highly resolving DAC/DAP. The blacker background on the xCAN is such an advantage for picking up on the micro-detail with just about any monitor and headphone we used during the review. But more than that, the dynamic range and sense of spaciousness provided a far more engaging experience than either of the aforementioned portable units.

Of particular note was the low-end on the xCAN with both the Hifiman HE1000 V2 and the Noble Audio Khan. The layering on the low-end was excellent. You got more body from the Nano iDSD BL but the definition is softer, less open sounding. More warmth certainly, but not as tight sounding for my money when you threw the same tracks on the xCAN.

Granted a lot of leg-work to get that level of resolution from the xCAN will come from a quality source/LO but even then, it does not require flagship level sources to sound that vivid. We tested with the R6 Pro from HiBy which has this slight-roll off on the top-end for a natural sound and the results with the xCAN were excellent. Clear, punch, resolving and with a very engaging soundstage. Nothing too intimate but certainly quite lively.

Things get even more interesting with 3D+ on the xCAN. The 3D+ tweak will also widen the soundstage of the xCAN creating a more open and spacious sounding midrange and a little more air and height.

Some might find this tweak a little less forgiving due to the more aggressive treble but I would say keep it on for the additional perceptible clarity and contrast to the bass response it can deliver. Especially when you combine it with the presence and bass switch on the XBass II switch which does wonders for the Campfire Audio Solaris performance.

Even without the XBass II option, monitors like the Layla really benefit from the airier top-end and additional treble sparkle the xCAN can deliver with the 3D+.

XBass II, to put it in a nutshell, is better than the first XBass sound tweak on the xDSD. Not only do you get the original XBass bass tweak but you now get an additional 2 options for the lower-midrange presence and for both bass and lower-mids presence to be on the same time. Each one will bring something to the table that you might find useful.

The depth and perceived low-end power can be enhanced using the XBass II bass switch alone which targets 100Hz and below to deliver more power and impact. You will hear more low-end body around 60Hz to 100Hz and a touch more warmth but nothing that is overly dominant or bleeds into the mids.

That being said, if your headgear is not overly prominent on the midrange using the bass option alone might dull the sound, making possibly too dark or pushing back the midrange presence too much. Adding the presence option on the back of the xCAN subtly focuses on the instrumental and some vocal presence and pushes them slightly to the fore.

If you are using this without the bass option it takes a slight mids bias approach and you will be drawn into vocal performances a lot more. I find some monitors like the Solaris and the Atlas to sound a bit limp with presence alone but for others like the Vision Ears VE8 to sound very good indeed.

This is the money shot (technical term – ed). With both on you get a much bolder and more vibrant low-end and midrange performance. The two also seem better balanced for my money. Vocals do not seem as pushed back and instrumental presence is more convincing.

However, at this point, I am ready to throw on the 3D+ tweak also because of the dynamic it brings to the treble domain. If you are going to throw on all the XBass II options then, unless your headgear is super bright already, the 3D+ balances all that out with much better headroom and treble presence.

This is where the xCAN really excels in. Without repeating myself from our sound impressions too much, the xCAN is miles ahead of the xDSD for sensitive monitors, both in terms of dynamic range and noise floors. This is the same for both Bluetooth connections and wired so the magic sauce must like in the analog domain on the xCAN.

Our test IEM for the majority of the review, the Noble Khan is not hugely sensitive and does require more SPL than most. It showed up a lot of hiss on the xDSD but was deathly quiet with a superb black background on both balanced and unbalanced with the xCAN.

Even the Solaris was well-behaved on the xCAN showing almost no noise or hiss at all on the 3.5mm S-Balanced output but a bit more hiss on the 2.5mm balanced output. I found the hiss with the Solaris on the xDSD very distracting by comparison.

I can only presume that the level of IEMatch attenuation and hiss reduction has been increased on the xCAN compared to the xDSD because the volume levels for efficient monitors are not quite matching. The xCAN volume does need to go up ever so slightly higher to match with the xDSD. Usually, that’s a consequence of IEMatch attenuation from our experience with the Nano iDSD BL IEMatch output.

There is plenty of power on the xCAN for demanding headphones, up to 1W into 32Ω which is plenty for the likes of Meze’s Empyrean and Final Audio’s D8000 to sound very good indeed.

Of course, a dedicated Class A desktop amp with more juice in it will bring these two headphones to greater heights but in our testing, we certainly did not feel either was collapsing like a deck of cards in terms of dynamic range and volume headroom.

Both the xDSD and particularly the Nano iDSD BL volume dials were going max on some of our tested headphones such as the Hifiman HE1000 V2 which is rated at 90dB. The xCAN’s expanded red zone for dB is much greater. As a result, we always felt we had plenty of volume headroom when using it instead of the xDSD or the BL.

The key difference beyond the maths of power is synergy with headphones in particular. The xCAN will be influenced somewhat by the source DAC or DAP but after testing with the likes of the R6 Pro and the Sony 1Z we felt the timbre of the xCAN amplifier was more neutral and snappier sounding than the Nano iDSD BL.

The BL, however, has more low-end body and warmth with the likes of Hifiman’s HE1000 V2 which some might prefer, however, we felt the attack was quite soft and not as well-defined as the xCAN’s performance. Headphones such as the Empyrean and Audeze’s LCD-2 enjoyed the cleaner and punchier sound of the xCAN using the balanced output with excellent instrumental separation for a portable headphone amplifier. 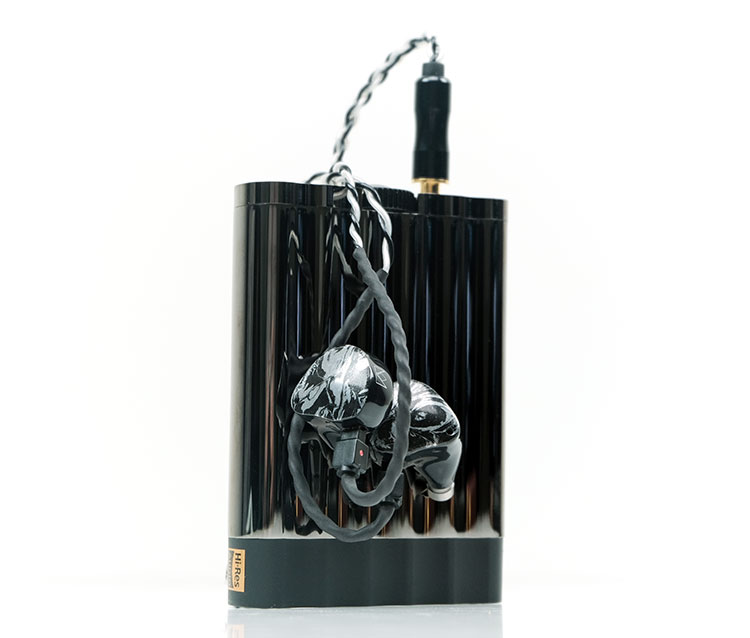 Monitor synergy is much more expansive than the xDSD given the xCAN’s much blacker background and more neutral tonality. Efficient monitors like the Solaris and Andromeda will pair well, especially using the S-Balanced mode where hiss is very low.

I was particularly impressed with the 3D+ and XBass II (bass and presence) all switched on using the Solaris. The mids on the Solaris can often be a bit tricky with poor pairings. With just the XBass I felt the low-end on the Solaris bloomed too much and lost a bit of definition. The presence option brought forward the vocals nicely but at a loss of that all-important low-end power.

Combined brought them both in nicely with a much more vivid presentation. Yet I still felt there wasn’t too much air in the presentation. Cue, 3D+ combined with XBass II all options on. This is your best bet to really open up the performance of the xCAN. You get a ton of PRaT, excellent vocal presence and most importantly some proper treble articulation and headroom.

If you are sporting slightly darker monitors such as the Layla from JH Audio or Rhines Stage 7, that 3D+ option combined with a decent silver cable is a very persuasive pairing if you feel the stock cable lacks a bit of air. Certainly,  compared to the stock sound of the xCAN, the Layla gets a massive lift in treble clarity with 3D+ but does not require any XBass enhancements.