The iBasso IT00 is an entry-level 10mm multi-layered graphene diaphragm dynamic driver universal IEM. It is affordably priced at $69.

Disclaimer: The iBasso IT00 was sent to us as a sample in exchange for our honest opinion in this review. We thank iBasso for this opportunity.

iBasso IT00
Tonality on the IT00 is also quite pleasant, as it manages to be dynamic and engaging. The details though are not overshadowed by the “fun” sound on the IT00, as it stays very detailed, while never becoming piercing, a thin line that the IT00 comfortably stayed within.
Slide here to add your score on the gear!94 Votes
8
8
Reader's Score
$69
iBasso

Ibasso has been producing products for portable audio out of China since 2008. They were able to establish themselves as a respected manufacturer of DAP’s, DAC’s, and amps, and that’s the first thing that comes to my mind when I hear the name Ibasso.

However, in 2016, they decided to venture into producing IEM’s with their first product, the IT03, then later on they came out with their IT01, IT04, and IT01s. The number at the end of the model number usually indicated the number of drivers that were inside the IEM.

When Ibasso contacted me about reviewing the IT00, I was surprised that they used 0 at the end of the model number. Does that mean that there are no drivers inside the IEM? Well, not exactly, but I think they were just redefining what an entry-level IEM can be like, and I’m looking forward to finding out what that definition is.

With the IT00, Ibasso went back to the basics. With just a single dynamic driver inside the IEM, one would be tempted to assume that not much technology has gone into producing the IT00.

The single dynamic driver inside the IT00, however, is coated with graphene, a specialized form of carbon that has a breaking strength that’s 100 times greater than steel. This allowed Ibasso to create a thin 5μm coating on the driver, making rigid but light. This would ensure that the driver would be easy to move, while at the same time be resistant to flexing.

The magnetic structure implemented on the IT00 was also designed to have higher magnetic flux. This gives the driver higher efficiency ratings, which then translates to better resolution across the spectrum.

Just outside the driver, the IT00 has a dual Helm Holtz resonator, which eliminates standing waves inside the drivers. This would ensure that the bass comes across as clear, eliminating the delayed version of the bass waveform from coming across as interference.

Despite just having a single dynamic driver inside the IT00, much care has been put into the design of the IEM which would translate to a pair of great-sounding IEM’s. 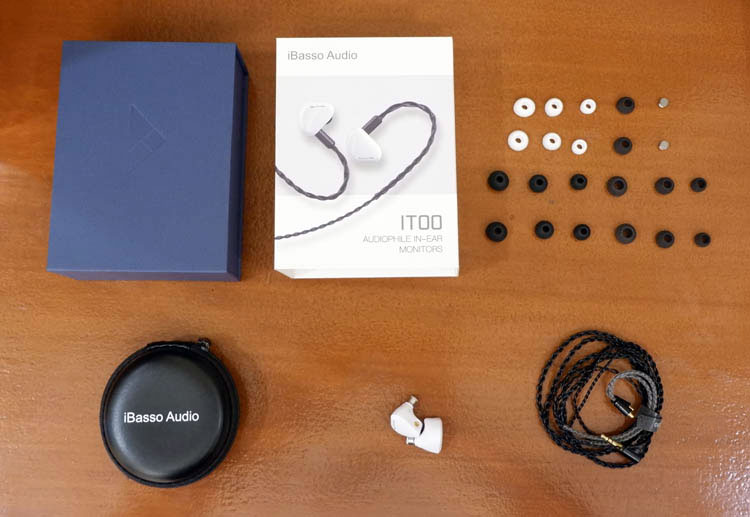 Although the IEM’s arrive with a pair of ear tips, the leather case comes with 3 types of ear tips inside. Also inside the leather case is an extra pair of screw-on filters. Though there’s no cleaning brush inside, I’m impressed that the filters in the IT00 are screw-on, when I see many IEM’s with higher price tag having stick-on filters.

A stark contrast to the white IEM shells on the IT00, the cables that came with the IT00 is pure black. They are on the thinner side, but it’s evident that much care has gone into producing the cable. There are even red and blue markings on the end that connects the cable to the IEM shells.

The cable is braided and terminated with a 3.5mm TRS connector on one end. At this price point, most IEM’s with a detachable cable are terminated with a 0.78mm 2-pin connection, which tends to have durability issues later on.

The MMCX connectors used by the IT00 tend to be a bit harder to unplug than usual, but I’m still more comfortable with having MMCX connected IEMS because they tend to be more resistant to breakage. 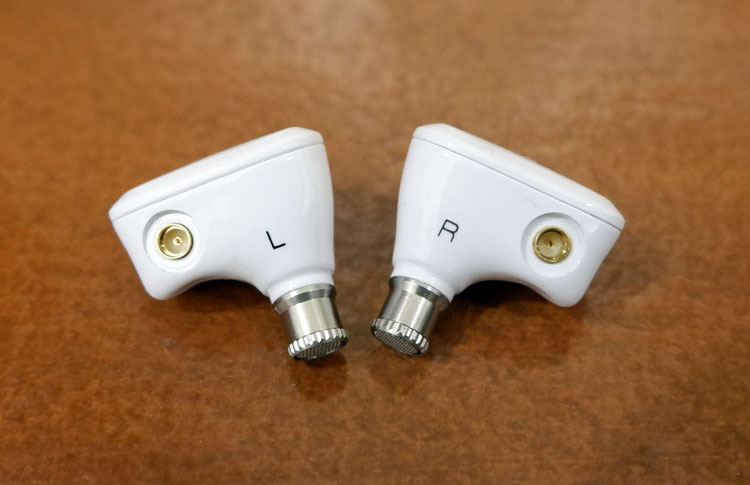 The IT00’s acrylic shells are light, but I would have wanted a bit more weight on the IEM’s though so that they would set down more naturally when I’m trying to get a good fit. Once the IT00’s are inside my ears though, they disappear and feel as if I’m not wearing any headphones at all.

The stems on the ear tips that came with the IT00 are on the shorter side, but the IT00’s stems are long enough to get the ear tips inside my ear canal. This helps the IT00 create a good seal, and isolates well from interference from the outside.

Towards the MMCX connection, the IT00 has a molded plastic sleeve that curves ergonomically with my ears. This keeps the cable from getting dislodged from the back of my ears when I’m wearing them.

With a thinner cable and lighter IEM shells, the IT00 tends to be a bit harder to store and wear. The cable tends to tangle a bit, and the shells don’t quite fall easily when being fitted into my ears. Once the IT00 is worn through, the experience is nothing but seamless, as they are light, at just 8g for the IEM shells, comfortable, and stays in place once properly fitted.

The translucent ear tips came attached to the IT00, and they sounded well balanced. The black silicone small bore tips, on the other hand, narrowed the soundstage substantially, and compressed the whole frequency spectrum, effectively making everything sound a bit more forward.

The white silicone ear tips sounded quite similar to the translucent ones, but they somehow make the bass less bloated, and the impact a bit more precise. It also helps that the white ones end up being more aesthetically pleasing? At least for me.

While the stock tips that came with the IT00 have their own merits, I found the most significant improvement when I switched to a pair of foam tips. I usually shy away from foam tips, as I find them making most IEMS more congested, but for the first time, I can see that foam tips can bring out the potential in a pair of IEM.

For the rest of my review I ended up listening with foam tips, and my sound impressions will be based on the IT00 with foam tips. 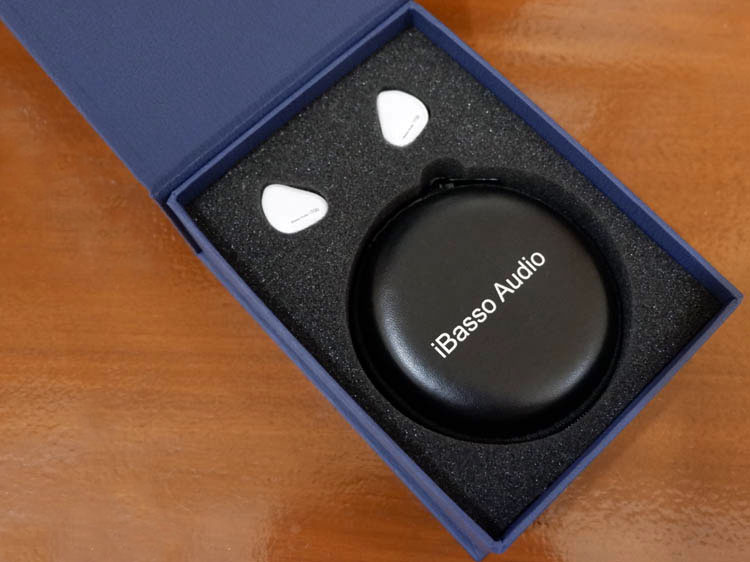 Bass is impactful and dynamic. I can hear that it has a well-articulated bass region able to accurately reproduce drum beats, and bass notes.

When I tried listening to the opening passage of Drink Up by Train where there is a visceral bass-thumping that you can almost feel around your body, and it is delivered well with the IT00. Bass resolution is good on the IT00, as details are present, and transitions are easy to pick up.

Generous amounts of bass would normally go hand in hand with some bass bleed into the midrange, but the IT00 was able to avoid this. I think this was accomplished by having a clear and articulate driver.

The male vocal range is more neutral with the dipped lower-mids (from around 500Hz to 1k) but posts 1k female or higher pitching vocals have a much stronger presence with a solid 1-3k rise.

Percussion in the upper mids also has some nice presence and bite with some quality contrast pulling from the upper treble sparkle and low-end power.

The treble is smooth but detailed. I believe that Ibasso managed to keep the treble region very detailed while appealing to more treble sensitive people like me. It’s the first time that I heard this bright cymbal at the start of Paramore’s Hard times, and it was so realistic.

The treble region on the IT00 is something special, as it manages to be very detailed, with how fast the drivers are, while not being too bright to the point of being sibilant.

Staging is powerful and deep as you would expect from a dynamic driver with moderate width and a more intimate upper midrange with that forward 1-4k presence shining through.
Top-end extension is excellent for an entry-level monitor, not too forward but not rolled-off either.

Plugging the IT00 to my Nokia 7.2, they were driven to an acceptably loud volume. With the low SPL that is required by the IT00, I’m not surprised that any source can drive them well, and they sound acceptable.

There was a certain amount of soundstage with my phone, and the overall tonality was still very pleasing. My Nokia 7.2 though, couldn’t do the IT00 justice, as most of the details that the IT00 is capable of, is lost because of the inability of my phone’s onboard DAC and amp to present them properly.

Once I connected the IT00 to a proper DAP, like my Hiby R3 Pro, I was impressed at how well the IT00 can sing. The nuances within the song are easy to pick out through the IT00. Breathing and guitar plucks are present, and some pops and clicks are easy to find even while the music is playing.

It says in the specs sheet that the IT00 is easy to drive, and I understand that many people would be tempted to believe that it can be driven off of anything even a cellphone. But the IT00 is transparent enough to magnify the flaws of the source it is connected to, so feed it with a beautiful sounding source, and you will be rewarded.

I’m sure most people would be directly comparing these 2 IEM’s and I can say that they are positioned to do so. With both IEM’s having a $69 price tag, and a single dynamic driver inside, with the IT00 having a Graphene coated driver while the FD1 has a Beryllium coated driver.

In terms of accessories, I think both FiiO and Ibasso have done well. FiiO’s accessories package seems to be the more generous of the 2, as the FD1 comes with a clear hard shell plastic case, while the Ibasso comes with the faux leather semi-hard shell one.

Ibasso however, has a slight advantage when it comes to the cable connection to the IEM shells, as they used a pair of MMCX connectors, as opposed to the more common 0.78mm 2-pin connection. It’s really a toss-up in terms of package accessories, and build between the 2, it’s a matter of which one you would prefer.

Tonality on the 2 IEM’s are quite different though, as the FD1 tends to have a more midrange centric tonality. The IT00 on the other hand is more V-Shaped with an upper bass and upper mids emphasis and good treble that offers a higher level of contrast. Music has a more dynamic character with a balanced bass and treble tuning bringing out the excitement. 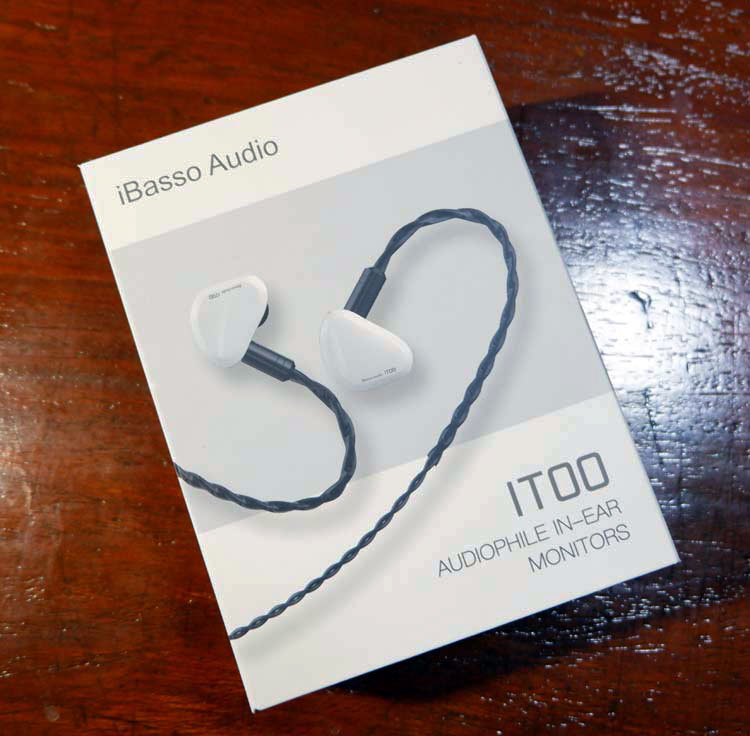 The Ibasso IT00 is a surprisingly good contender for the entry-level range, with it being a complete package. Where the accessories are quite generous, especially the better cable connection in the form of an MMCX connection. I would have wanted to see a pair of foam tips though, as the foam tips really improved the IT00’s giving it a much more visceral response.

Tonality on the IT00 is also quite pleasant, as it manages to be dynamic and engaging. The details though are not overshadowed by the “fun” sound on the IT00, as it stays very detailed, while never becoming piercing, a thin line that the IT00 comfortably stayed within.

This is a highly competitive entry-level dynamic monitor, one that gels very well indeed for modern pop and rock with excellent contrast, especially the treble which stays on the right side of clean and clear. Well, worth a demo.