The Susvara delivers a huge and immersive presentation with a very fast and controlled response. Perhaps the fastest response in any planar headphones I have heard to date. If you are thinking of a Stax-like response you honestly would not be too far off.

Tonally, the Susvara is neutral to natural sounding. It is more coherent than the HE1000 V2 and lighter in body but more expansive sounding than the LCD-4. The Susvara particularly excels in a fantastic level of articulation with a wonderfully precise transient response.

The low-end is almost completely neutral and linear with only a slight dip between 1-2k disrupting an almost perfect low to midrange response. If anything the marginally dipped mids just add to the sense of space the Susvara delivers.

There is some additional energy from around 2-5k but it is in no way forced or as aggressive sounding as the HE1000 V2. This is an incredibly balanced-sounding headphone.

The soundstage on the Susvara is beguiling. I called it expansive and it most certainly is that in terms of width and height but it is no way hollow sounding or vague. Imaging on the Susvara is perhaps the most accomplished I have on a planar and one of its key strengths both in terms of placement and speed. It does not miss a thing.

On initial listening impressions I was wondering if this would be the weak link given its airy lighter presentation in parts but it is much more nuanced than the “always on” weight of the LCD range.

The dynamic range of the Susvara is such that when it goes deep you will hear every last detail right down to the rumble. Then it will switch off right away when not needed. Also, the quality and power of the amp will determine how deep the Susvara can hit. The better the amp the more defined and deeper the Susvara can go.

Linear, clean, well-defined, and wonderfully detailed. These are the watchwords for describing the Susvara bass. I do detect a very slight enhancement in the sub-bass response up to around 50Hz but it’s marginal from an otherwise straight line up to 300-400Hz.

It does help though, particularly when the source goes deep the Susvara can keep pace without ever sounding heavy-handed or slow. I am all for linear low-ends, I find them coherent and accurate in general but a tiny lift in the sub-bass is a big help, especially if I want a little bit of power and a more satisfying level of texture.

Going back and forth between it and the old HE6 it is remarkable in some ways how the Susvara took a slightly similar approach to its low-end but injected a much superior level of transient response control and detail. The HE6 will initially seem like it is a bit more forward, harder-hitting, and bassier than the Susvara’s low-end.

However, listening carefully the articulation of the notes on the Susvara is tighter, and more defined thus creating a much better sense of space. With the Susvara the dynamic range and nuanced differences in low-end instrumental timbre and note control are just that bit more obvious and pleasing to the ear.

Mids on the Susvara have a tiny bit of response wiggle from 500hz to 1k but otherwise remain impressively controlled and balanced. Bass to mids transition is seamless with instrumental separation and positioning a key strength in its presentation.

There are no excessive lower mid-range dips to force a false sense of depth or artificially push forward its vocal presence. As such the Susvara timbre is so very natural and effortless without pushing into euphoric levels.

It is lighter sounding than the LCD-4 which has a touch more body or sustain in its instrumental timbre and vocal pitch.

However, the attack is just a bit more refined, particularly in Mezzo-soprano and Contralto vocal pitches where sibilance control is a touch better and slightly smoother. I sometimes got a little more “sss” presence without any detail in the LCD-4 compared to the Susvara which was much more revealing.

If you are switching from the HE6 you will find that vocal presence is just marginally more neutral in positioning and not quite as front and center. Again, much like the LCD-4 though the HE6 attack is just a little sharper at times with sibilance control and a bit more one-dimensional.

The Susvara attack is quicker, better defined, and more natural sounding. The sustain also has a bit more detail and the decay doesn’t linger as much. It will not smooth over sibilance, it is revealing and will show whatever the source track has but it is not as harsh sounding.

There is a gentle lift of around 4-5dB from 2k and it seems fairly sustained until around 6-7k with a tiny drop and lift again 7-8k. The top-end extension does not fall away dramatically with plenty of sparkle and a minor bump again from 10-12k.

Again, the theme here is one of coherence with just enough presence to add some very welcome sparkle at the top and some bite and presence in the lower treble without sounding too forward. It is one of the key differences between the HE1000 V2 and the Susvara.

I find the HE1000 V2 to be a bit more aggressive and forward-sounding than the Susvara top end. It is more balanced and has a better body than the V1 but it is also can be more fatiguing. The V2 over the V1 is a case of perceptible improvements due to positioning rather than an upgrade in technical capability. More of a tweak in its tonal balance.

The Susvara is more balanced, and technically more capable with far better control and articulation. You get more detail, faster response, and certainly more headroom with Susvara’s top-end response.

Where the HD800 peaks at 7k, the Susvara does not. It takes that better balance of the HE1000 V2 but pulls back on the aggression making this a smoother treble performance that is both lively and airy at the same time. 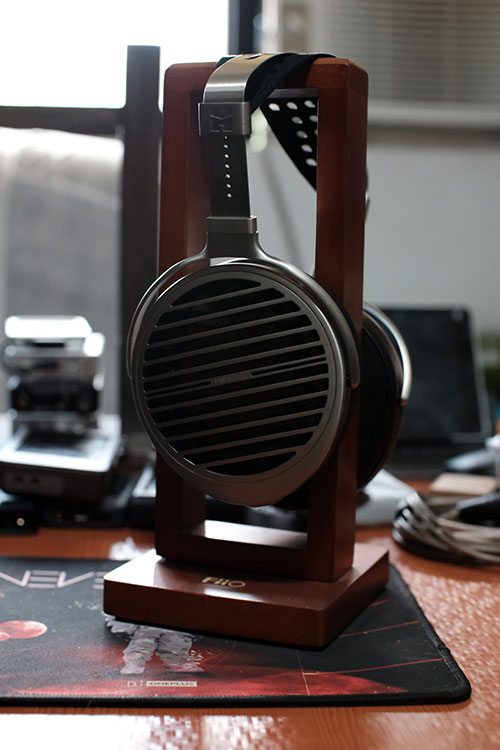 The Susvara is rated at 60Ω at 83dB which is a shade less efficient than the HE6 at 50 ohms and 83.5 dB. Much of that has to do with the way the voice coil traces were constructed.

The use of a 24k gold conductor layer is something Hifiman has looked at for years as an ideal way to keep the vibration mass on the nanometer diaphragm at a very low level compared to other materials.

Gold though has a much higher resistance level so simple conductor trace designs were used to keep the ohm rating manageable at 60Ω. In doing so the efficiency level of the Susvara dropped to HE6 levels.

Thus, the Susvara really needs a quality amp to get it working to optimal levels, much like the HE6. Quite why anyone would spend $6000 on the Susvara and pair it with a weak amp is anyone’s guess. It is possible you may not be aware of how well the Susvara can indeed scale.

Hifiman has also released their new EF1000 amp to pair with the Susvara. It will cost you $10000 though. I only heard it for about 15 minutes earlier in 2017 and it was impressive. Sadly, we do not have it here to confirm those initial positive impressions.

Smartphones, DAPs, most portable, and even a hefty chunk of desktop amps will not cut it. You will get sound, maybe some decent volume but in most cases, the Susvara will sound compressed, shrill, and lacking in any dynamic range. That fantastic resolution, immersive imaging, and lightning pace deserve the HE6 power treatment.

And not just power but also synergy with DACs and sources, though that might be swayed more by personal preference. It is something I was more into than outright power with the HE1000 V1 and V2 and the same almost holds true for the Susvara.

The only caveat was I wasn’t so concerned about the top end of the Susvara in terms of solid-state energy as I was with the HE1000 V2. 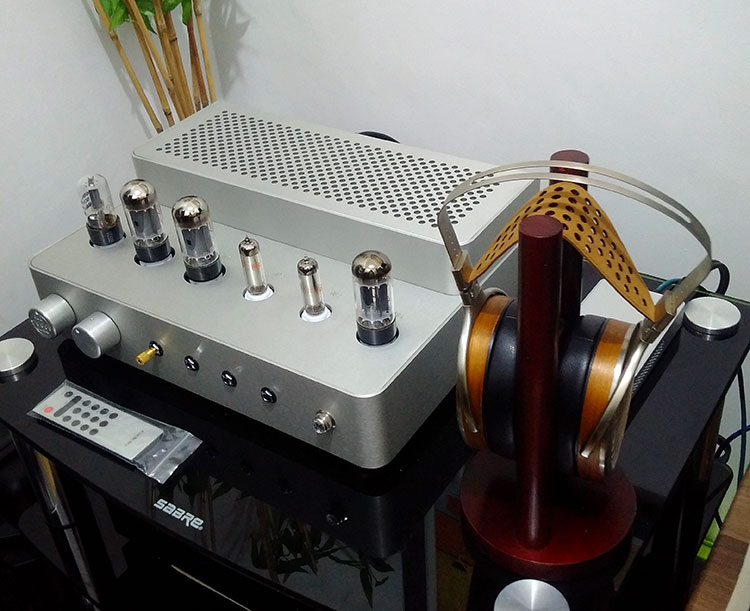 Surprisingly the ALO Audio Studio 6 came up a little short for power though tonally it was buttery smooth and perhaps the most pleasing of synergies paired with the NuPrime DAC-10 source. The detail was excellent and the vocal presence had a very sweet and refined tone.

When I say short for power I found a comfortable listening level but very high up and technically I could push it to the max with the Susvara without it ever clipping or sounding too loud.

Luckily the pre-amp of the DAC-10 delivered some decent gain to negate the volume issue and allow me to drop it considerably. It is one of those times when I wish Studio 6 dropped one of its four unbalanced outputs and gone with one dedicated balanced output.

Synergy-wise, I do prefer the tonal color of the Continental Dual Mono Wolfson DAC with the Studio 6 and the HE1000 V2, even if less resolving.

The NuPrime DAC-10 cooler signature tends to bring out a little more top-energy splashiness than the CDM pairing. The Susvara has no such issues with this pairing tonally, it just needs more oomph or a good pre-amp. 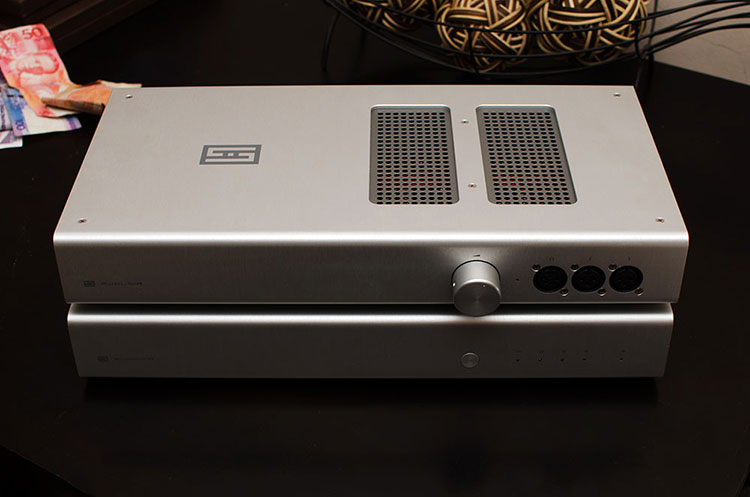 Dropping down a price tier I actually enjoyed the range and power of the 5W Gungnir/Mjolnir pairing. I lost a bit of smoothness and that buttery sweet tone of the Studio 6 but in return, I got a better low-end presence and more headroom on the balanced output.

Fans of that slightly drier but energetic and punchy solid-state sound could do a lot worse than this pairing. The synergy is more aggressive sounding than my preferred Cayin iHA-6 pairing and delivers a bit more top-end body. It is the kind of pairing that works really well with rock and modern pop for non-critical fun listening.

For a step up in resolution and dynamic range, the Cayin iHA-6 solid-state 7W balanced output pairing with the Chord Hugo 2 was special. Perhaps my favorite pairing and certainly the one that I default to more times than most.

I actually started with the Oppo Sonica DAC with its excellent ES9038PRO chip. Whilst it is incredibly detailed it is still a touch digital sounding compared to the more natural tones of the Hugo 2 DAC output. Cayin’s musically impressive iDAC-6 is also a great pairing with its own iHA-6 amp but its AK4990 chip doesn’t quite have the resolution and nuanced detail retrieval of the Hugo 2.

If there is one criticism I have of the iHA-6/Sonica pairing is the slightly ethereal quality of the top-end response of the Susvara. It is tight, articulate, and wonderfully detailed but some might find it a little too light in body.

Hugo 2 fixes it rather handily. The Hugo 2 DAC took the clarity and detail of the Oppo ES9038PRO and added more body and better depth to the presentation with the iHA-6/Susvara pairing.

You get a far more natural and dynamic sound with better harmonic balance as well as some fabulous low-end detail.