The FiiO E6 is a complete revision of the original E5 entry-level portable amplifier featuring digital volume control and up to 10 hours of battery life. It is priced at $29.99.

Disclaimer: The FiiO E6 sent to us is a sample in exchange for our honest opinion. We thank FiiO for this opportunity.

The FiiO E5 was released in 2008 and seriously changed the game in the portable amplifier scene. Fast-forward three years, and the company from Guangzhou, China has finally updated the palm-sized amp.

And it’s definitely not just a cosmetic change. The E6 is smaller, lighter, and has a lot more shiny buttons and lights than the E5. I’m not even talking about the sound yet. 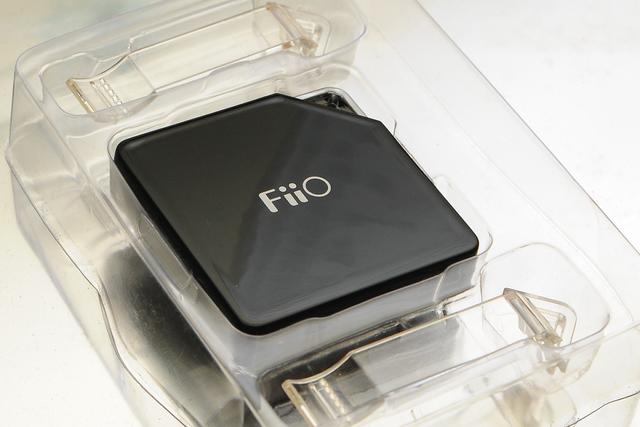 This little amplifier is simply a joy to hold. It’s small enough to hide in one’s hand and there are no sharp edges. Shaking the E6 vigorously reveals no loose parts –as long as you keep a finger resting on the volume control.

The silver-colored triangulated corner on the upper right of the E6 does the job of breaking the monotonous black from the corner-to-corner design that FiiO started earlier with the E3 and E5.

Attach your favorite keychain there if you wish, because, from the way it looks, that silver loop isn’t going to break without a tough fight. But give yourself an easier alternative, and make that two.

That’s because FiiO decided to include a transparent detachable clip that fits snugly into that corner. And there’s a spare in case you damage or lose the first one. 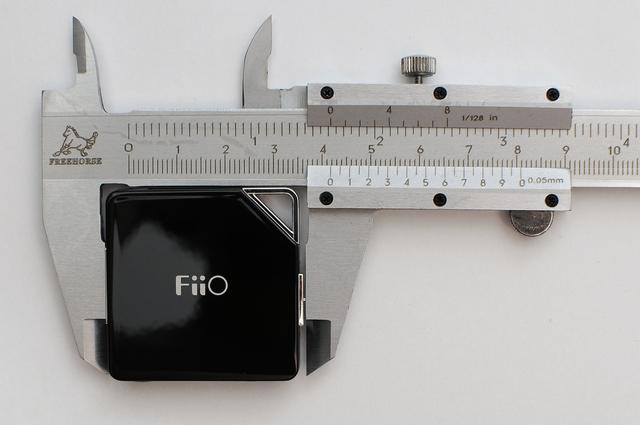 Input and output jacks are conveniently located at the lower left and upper left of the amp, respectively.

On this same side, the digital volume control can be found. It is probably the only loose part of the entire amp. If you look through either the input or output jack, you can actually see through to the other side. I don’t really know the significance of this fact but it was worth mentioning, anyway.

Battery life is stated as ten (10) hours, and actual testing reveals this to be fairly accurate. Recharging the lithium battery is done via a mini-USB connection, and is fully charged in about two hours or less.

Like the previous E5, the E6 also uses lights to communicate with the user on what and how it’s doing. Holding up the power switch for about two seconds, the E6 lights up a deep blue right in the middle of its silver corner loop.

FiiO calls this “concealed” but it is pretty conspicuous, and it should be because you need to know if it’s working or not. Turning the amp on its back, you’re greeted with the big, bold letters spelling out “E6” right above the FCC and CE logos. 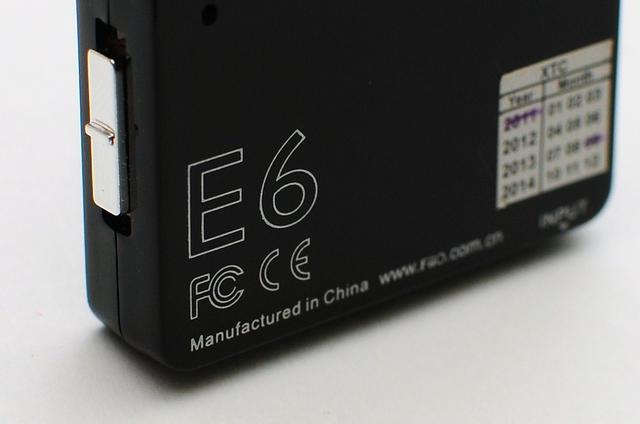 FiiO also makes an effort to let you know where it was manufactured and the web address where you can reach them. Above all this, though, is a small hole one can mistake for a microphone input. It is actually the indicator for the current EQ setting. 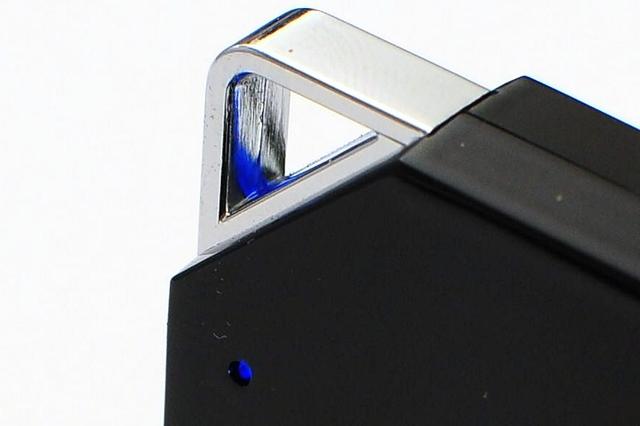 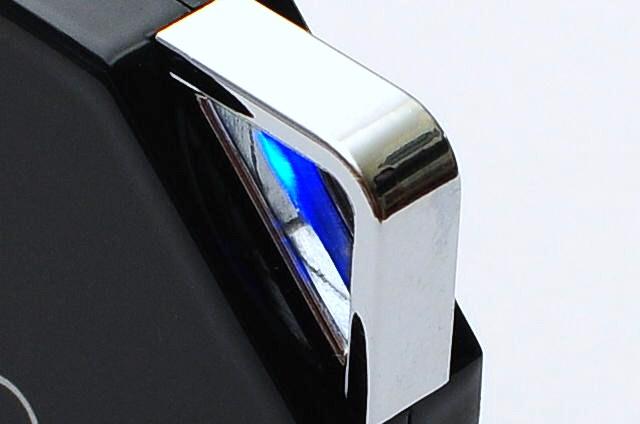 EQ: where the fun begins

There are three EQ, or equalizer, settings that the E6 conveniently packs within its 1.5 x 1.5 x 0.25-inch frame. If the indicator light is off, there is no prevailing EQ setting: the spectrum is left flat and thus, “neutral” sounding.

Pushing up the power switch once changes the indicator LED’s color to red, and this setting boosts the upper bass frequencies, much like the bass boost feature the E5 had. Distortion in this EQ setting is well-controlled.

The next one boosts the midrange and is indicated by a blue LED. Listening through headphones that bathe in midrange produces the greatest effect. Notably, using this setting on a stock Koss Portapro makes it sound as if it were modded with additional holes in the driver housing, greatly improving midrange performance.

Last on the EQ settings is the pink-colored frequency drop. This one lowers the entire frequency by 3dB, allowing for stronger sources to be plugged into the E6 while maintaining ample volume control. Turning off the amplifier while an EQ setting is in effect does not reset the setting. When you turn it on again, the EQ setting stays where it was. 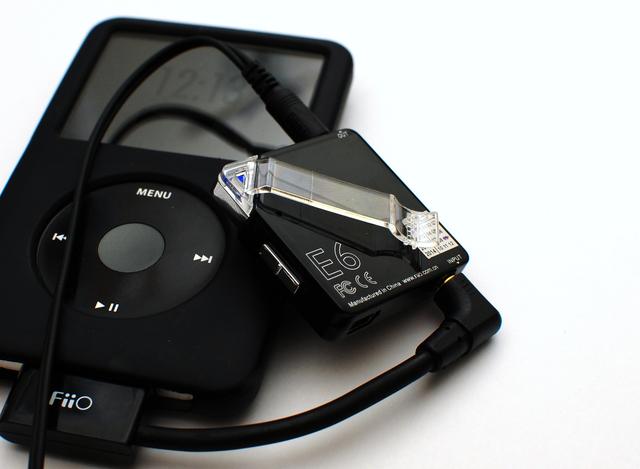 The FiiO E6 is an improvement over the E5 also in the sound category. There have been reports that the E6 uses the same basic circuit design and opamp as the much larger and DAC-equipped E7. That is nothing but good news for current and future E6 owners.

I do not have an old E5 to compare the E6 with, but what I do have is a portable 9V-powered amplifier, something easily twice or three times the cost of the FiiO. It has a standard rotating volume control and can drive headphones up to 600 ohms.

Some headphones I used for testing were a Grado RS1 and a Yuin PK1. The source was from an iPod Classic 6th Generation and a FiiO L9 Line-out cable. I was able to test the number of clicks from maximum to dead silent and vice versa and found that the number is 64, in line with the manufacturer’s specifications.

This told me a lot about how much real power the E6 had compared to a bigger portable amplifier. Against the 9V amp, the E6 reveals more ambient hiss from recordings as the former cleans this up better. On digital silence, though, the E6 is as quiet as a mouse. 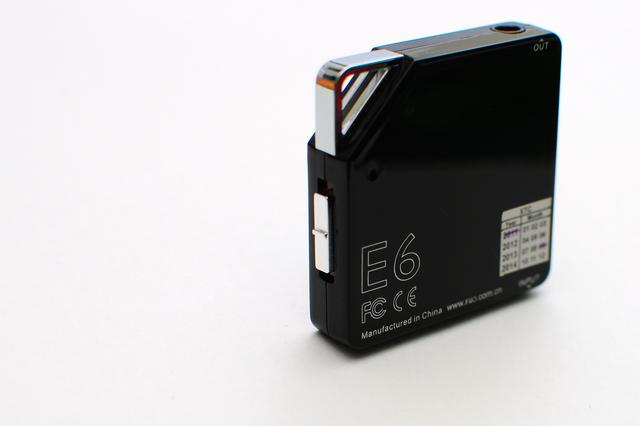 I have absolutely no qualms about FiiO changing the material of their front-line entry-level amplifier, the E6, from metal to plastic. The sleek and compact design speaks volumes about the direction in which FiiO is going in terms of ergonomics.

They have upped the ante in the portable amplifier industry, making a strong contender in the E6 that seriously puts pressure on its competitors. The E6 easily sounds just as good as higher-level 9V-powered amplifiers.

On top of that, it offers three different sound signatures in the form of EQ settings that to me, shouldn’t be underestimated. Coupled with the right headphones and quality music, the E6 sounds like three different amplifiers rolled into one.

And all you need to do is flick that switch.