The Empire Ears Wraith is the company’s flagship EP Series quad-electrostatic 11-driver universal monitor featuring their proprietary EIVEC technology. It is priced at $3499.

Disclaimer: The Empire Ears Wraith was sent to us in exchange for our honest opinion in this review. Many thanks to Empire Ears for giving us this opportunity.

Last weekend we unboxed the custom Valkyrie on Headfonics and we called that triple driver electrostatic monitor, a co-debut. Yes, there is another, (Yoda accent). That ‘other’ is Empire Ear’s EP flagship range universal monitor, the quad-electrostatic hybrid Wraith and to no one surprise, we have it here to unbox the potential awesome.

This flagship is going to cost you a bit more than the $1599 Valkyrie. At $3499, the Wraith is the top of the tree in the Empire Ears EP series and, (outside of their collaboration with Effect Audio on the King Arthur), their overall TOTL monitor as the time of writing.

This time around the driver count gets a big bump from 3 to 11 with not 1 or 2 but 4 Sonion electrostatic drivers and the other seven comprising of BA drivers. There are no dynamic drivers inside the Wraith so it is not a ‘triple blend’ like the Valkyrie.

Off the top of my head, I can only think of two other quad electrostatic driver hybrid out on the market today. That is the Octa from Wavaya with its 4BA/4 e-stats 8 driver mix and AME Custom’s single DD/BA and quad e-stat Radioso. The Octa we have queued for review very soon also. I am fairly sure more quad-driver blends will pop up in the not too distant future as these hybrids get increasingly sophisticated.

The exact configuration is 2 BA for the lows, 3 for the mids, 2 for the highs and the quad e-stats for the super highs. As with the Valkyrie, the Wraith uses the EIVEC electrical component system to maximize the electrostatic driver’s performance by allowing each driver to control a specific frequency response range. This is in addition to a more advanced 5-way synX Crossover Network as opposed to the 4-way inside the Valkyrie.

Like the Valkyrie, the Wraith uses Empire Ear’s A.R.C tech which I first encountered when reviewing the Phantom last year. We skimped on the A.R.C. detail when introducing the Valkyrie last week so let us dive into a bit more detail on what exactly A.R.C is.

A.R.C is short for Anti-Resonance Compound and is a special type of damping coating used on the inside of the Wraith’s shell and applied to virtually every component used such as the drivers, tubes, and crossover boards.

Empire Ears claims that this coating adds a critical level of mass or solidity to the internal components. This, combined with ferrofluid damping inside the driver, creates a very resonate-free and phase-correct listening experience with the Wraith.

The Wraith lives pretty much an ohmic resistance and reactance free lifestyle with an intriguingly low 4Ω and a fairly sensitive 117dB SPL. It will not take much to drive these and background hiss could be, (and is), a factor when pairing the Wraith.

To be honest, this type of rating is quite unique for an electrostatic hybrid monitor. I am always seeing 100dB to about 110-112dB SPL and I am told that is due to the difficulty in driving the Sonion drivers. Before you say lack of a dynamic driver, let me point you to the similar BA/e-stat combo, the Wavaya Octa which is 100dB SPL and it also has a quad-electrostatic array and no dynamic driver. 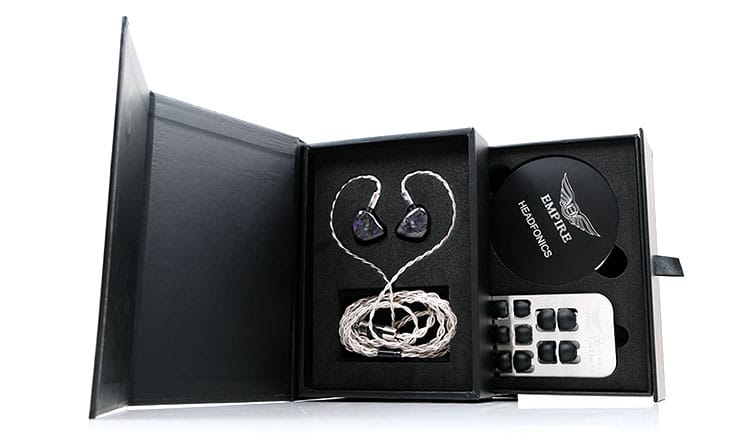 It is real pro time with the Wraith unboxing and an altogether fatter look than the Valkyrie ensemble. Its fatter because of the tiered modernistic all-black slider box they picked for the Wraith. The tone and look are pretty similar to the Valkyrie though this is the universal version so you do get a set of tips with the Wraith that require its own spacing.

The slider tray is a nice touch and it allows Empire Ears to spread out the Wraith kit a bit more and make it look a touch more dashing, and well, TOTL. I still say Vision ear’s Elysium presentation is the king though at this price point but bear in mind the VE package is huge. 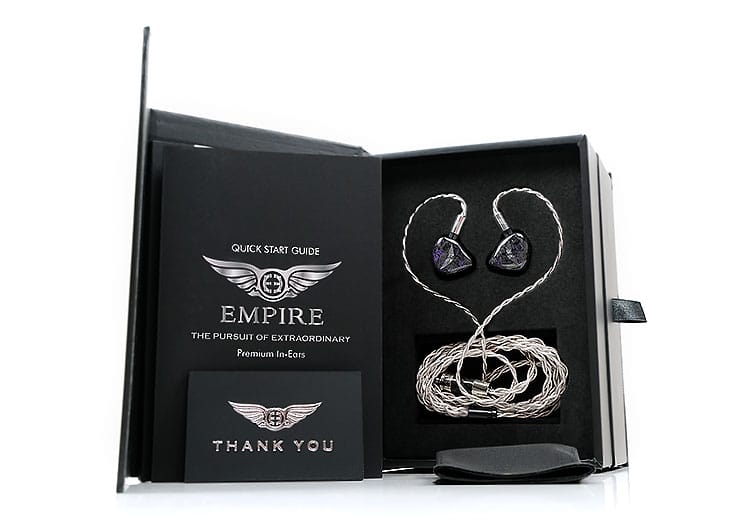 Inside you get a reasonable amount of very high-quality accessories. Alongside the monitors, you 5 pairs of Final E tips in an aluminum tips tray and a similar aluminum carry case to the Valkyrie on the lower deck of the box.

On the upper deck, you get a quick start guide and a thank you card as well as your warranty information, cleaning tool, and a silk cleaning cloth. I left the best accessory to last, the cable. 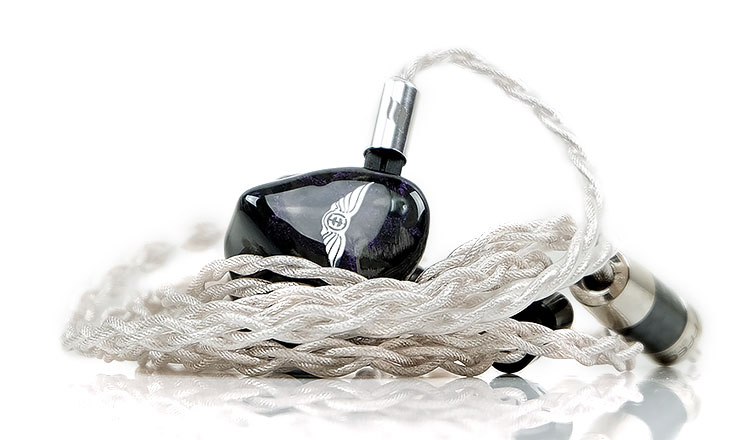 This is a killer cable and worth $699 in its own right. This is the Effect Audio Cleopatra and we covered this cable extensively earlier this year. The Cleopatra is a 26AWG silver wire cable but of a different grade to some of their other silver cables. The Cleopatra is also a Litz build with a 7-core multi-strand geometry. The strands are individually enameled in a woven Litz technique much like their excellent Leonidas II.

The grade of UP-OCC Pure Silver being used is much higher and more complex than that used in the Premium Series Thor II. So much so, Effect Audio has introduced woven Kevlar materials into their geometry build to keep this grade of silver stabilized and working optimally.

Sonically, this will flesh out the lows a bit better and generally bring an excellent level of refinement and smoothness right up into the treble. All this while offering next to no physical noise and what seems to be a lighter stainless-steel splitter so it is even lighter than when I reviewed it.

The Wraith is a 2-pin connector as with all EE builds so the Cleopatra is also 2-pin 0.78mm but you can choose from a 3.5mm or 2.5mm TRRS at the checkout depending on your preferences. 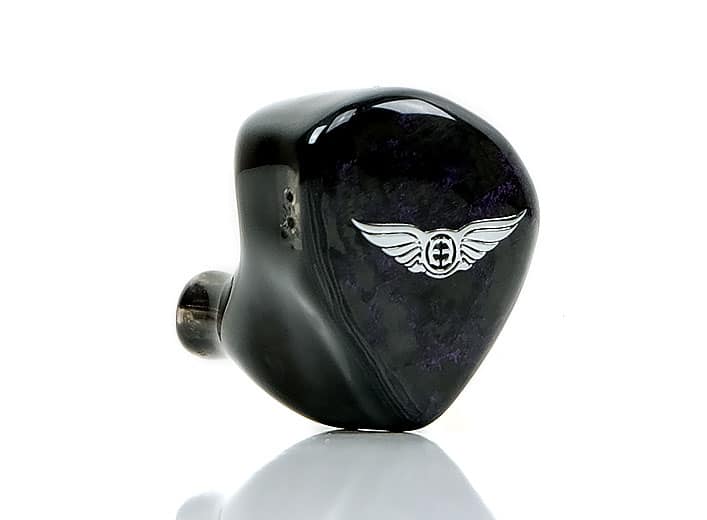 This is an acrylic hollow body universal design that is deep but reasonably narrow. It has a slightly conservative custom universal design so not as contoured as the Trinity from Jomo Audio but still very comfortable in the ear.

The overall design tone is dark and subtle rather than the bright pop of the Valkyrie design I showcased last week. The shell is opaque onyx and possibly a smoked nozzle but that may be simply a trick of the light making it look slightly lighter under studio conditions.

The faceplate I believe is called Amethyst Haze which is not a design plate option for their custom monitor products so fairly unique. It does have a nice shimmer to it under certain lighting conditions but otherwise, the design is nuanced and subtle rather than garish or vivid. 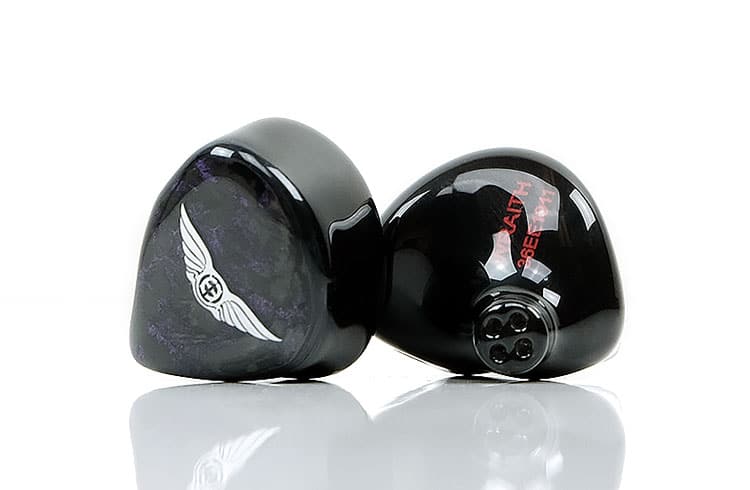 Despite having a fairly short nozzle the Wraith slips into the ear really nicely. The Final E tips are an excellent choice and I say that as a traditional “non-fan” of these tips because of the way they can ‘close up’ under pressure and block the sound. They do not do that here with the Wraith.

In fact, the Final E tips and Wraith pairing may well be an inspired choice because the seal is pretty good as well as staying pretty secure in the ear. I have no issues with comfort at all with the Wraith/Cleopatra/Final E tip combo. My only caveat is that shell depth means the Wraith will stick out of your ear slightly more than a regular IEM. 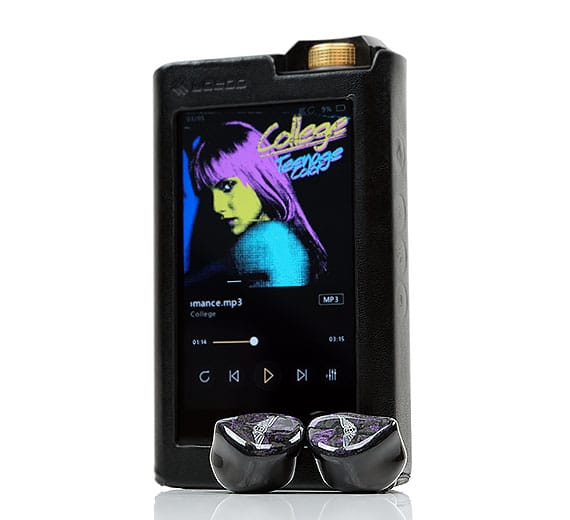 The Wraith I have is the final retail offering and as such the final tuning. I cannot say if the prototypes tuning that has been circulated before has changed but given my understanding of how the sound was described previously and what I am hearing now I believe a final tweak may have been made.

So, what I am hearing out of the box is a fairly mid-centric monitor with a distinctly expansive but BA’ish timbre from the lows into the mids. The reach on the Wraith low-end is deep with some great extension but it is more spacious and quick-paced compared to the power and solidity of the Valkyrie Weapon IX driver. Given its a dual BA bass configuration I am not surprised and you get the hallmarks of a BA low-end including a short decay and a tightly defined but neutral level of quantity.

There is a slightly sub-to-midbass bias and less of a rising curve into the lower-mids so it is not an overly warm sound but there is also some fade in the top-end beyond 5k so it is not spikey and thin sounding either for instrumental timbre. It has a natural tone but one with excellent clarity.

The lasting initial impressions, however, is that mid-centric tuning on the Wraith. From 1k up to almost 5k this is elevated and forward sounding with a very clean but beautifully refined vocal delivery. I would say also the timbre is sweet and slightly on the light side with fast articulation.

Treble is more on the relaxed side with a smaller bump at 9-10k. This is not a dark top-end, however. There is plenty of headroom suggesting the e-stat monitors are doing a good job beyond 10k. Whilst it is mid-forward it does not sound veiled or lacking in air. 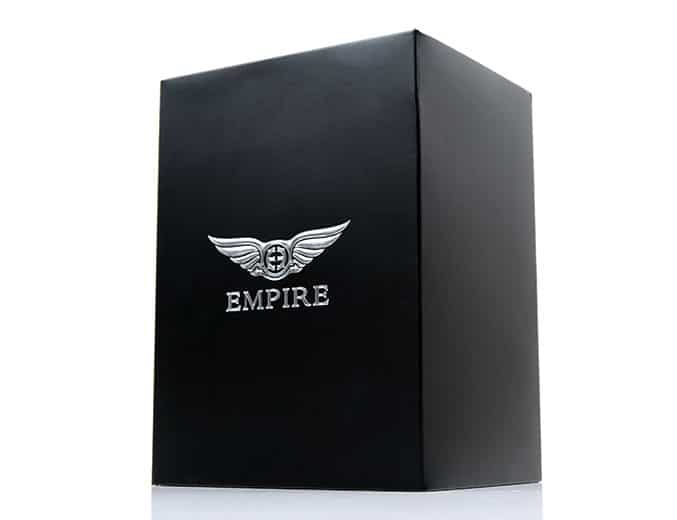 It is really interesting how every company has so far put a very different or unique spin on how these electrostatic hybrids should sound.

We have had bassy warm offerings, treble- centric presentations and now, two to three mid-centric tunings, the Octa, Elysium, and now the Empire Ears Wraith. None of them sound like each other at all with one using a dynamic driver for the mids whilst the other two are using BA drivers and a shed load of e-stats.

Of the top of my head, the closest I can think of to the Wraith might be the Wavaya Octa in terms of general presentational bias but it will be interesting to see if it is as resolving as the 11-driver quad-stat Wraith in the main review comparison.

For now, the Wraith stands out as a vocal friendly TOTL. Lots to more to come on this flagship offering from Empire Ears so stay Tuned!