The ES-5 is the new flagship universal IEM from Earsonics ES Range. It is a five balanced armature driver monitor priced at €950.

Disclaimer: The Earsonics ES-5 sent to us is a sample in exchange for our honest opinion. We thank the team at Earsonics for giving us this opportunity.

Truth be told I was not expecting the Earsonics ES-5 given the S-EM6 V2 was out in their Music line already. However, given the stellar performance of the 5-driver Campfire Andromeda and the close price point of the 5-driver ES-5 it did pique my interest.

If you remember I waxed lyrical about the ES-3 in late 2016 and for good reason. This was a stellar triple driver IEM with a smooth sounding slightly musical u-shaped presentation with excellent levels of detail.

It was my first encounter with the Earsonics brand and I can see why it has such a popular fan base. The price point was a bit higher than a lot of other triple drivers but I think it was justified.

If they can take that generally excellent pedigree from the 3-driver to a 5-driver then we may have some serious competition for Campfire’s Andromeda not to mention quite a few other multi-BA IEMs out there at similar prices.

The ES-5 slots in next in line to the S-EM6 v2 in the Earsonics Music line and priced at €950. The Music line also has the cheaper ES-2 and ES-3 IEMs as well as their flagship S-EM9 9-driver model. The ES-5 is their new 5 balanced armature driver model with 1 for the lows and 2 for mids and 2 for the highs with a 3-way impedance corrector.

All the drivers are proprietary in design exclusively for Earsonics. From the looks of the design charts, the low-end driver is a larger bass driver and the other 4 are smaller variants. Everything is being touted as 100% Made in France. I passed comment on this pitch before with the ES-3. It does raise the costs a little but it also gives Earsonics a much greater measure of control on the design and manufacturing process.

The design space inside the ES-5 shell incorporates the ES-3 innovative technology but this time it has evolved measurably into what they now call EVS or ergonomic versatile shell. It still uses the flexible room technology of the ES-3 but builds on it to produce a much more complex 12 space design.

This provides a very organized electrical and driver layout with everything basically having their own ‘room’ including the drivers, crossover board, and wiring. It makes for one heck of a pretty engineering spectacle with those translucent shells showing off their EVS handwork. 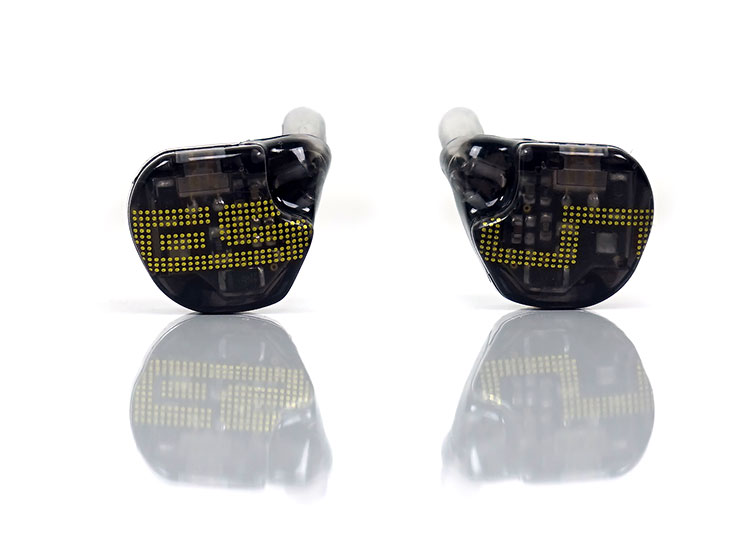 The form factor of the ES-5 shell design continues from the ES-2 and ES-3. Only this time Earsonics have opted for a translucent finish to the shell instead of a matte black. This is a nice touch as it shows off one of the key pitches, the EVS chamber design, and the very elegant design flow of the internals including the drivers.

The build is a little deeper than the ES-3 but the general profile is not much bigger at all and compared to the Andromeda it is smoother to the touch and smaller in the ear. This is a very lightweight IEM.  The translucent smoke-colored shell is designed from reinforced acrylic with “ES” on the right shell top plate and “5” on the left shell. The yellow dot on tinted translucent shells is a little subtler than the ES-3 white on black pattern finish.

Each shell is comprised of two halves though the seal is contoured rather than deploying straight lines which presents a more attractive aesthetic. The seal is held together with 2 small and very discreet star screws (not Torque) on the base of the shell. The curves of the shell are not completely continuous. There is a very slight cornering effect on the edges of the plastics but its very minimal and too smooth to be a concern.

The nozzle is the same shortened drop funnel design as the ES-3 and has a clear plastic finish. There is no lip on the edge of the nozzle so just watch your tips if they are a bit loose they may slide off. I found the stock tips to do a good job of staying on though.

Earsonics also recessed the bores in the tube, kind of like a variation of the horn delivery system which I quite like on the A18 and VE series from Vision Ears. It is not an actual tubeless bore, there are in fact 3 bores. However, the extended nozzle beyond acts as a horn-type delivery system into your ear canal. 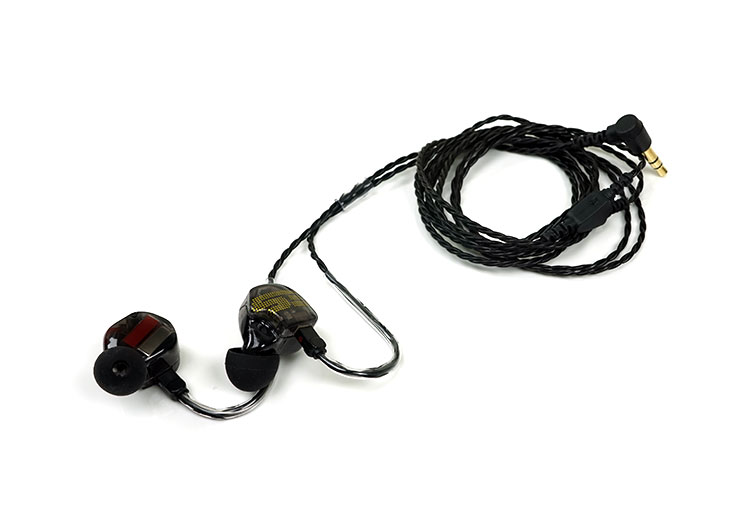 The ES-5 is terminated with a flush 2-pin socket design for over the ear wearing and comes with a fairly standard Plastics One type intertwined black 1m cable with a right-angle gold-plated 3.5mm stereo jack.

I am presuming from the thickness and dual wire design it is a 4-core copper variant. Chanced are at this price point you might want to consider changing up to a silver litz or SPC variant just to give the dynamics a bit of a lift.

Strain relief is excellent on the y-junction, which is fairly hefty in comparison to the rest of the cable, as well as similar strengthening on the jack. The memory hooks are fairly stiff but manageable for hooking around the ear.

The cable itself I have come across in plenty of guises down through the years with CIEM manufacturers which means its soft, pliant, easy to work with and fairly low on microphonics. The chin strap is a basic plastic tube, it is functional but nothing special.

Given the similar form factor, the fitting process of the ES-5 is similar to the ES-3 which means it is slightly unusual. The nozzle is angular in such a way that the natural position of the shells, between the pinna and outer ear, is slightly sticking out rather than sitting flush in.

The tip selection supplied by Earsonics for the ES-5 is very good but not quite as comprehensive as the likes of the Andromeda. You go get single bore silicone and dual flange and you do get foam tips but the sizing is just medium and large for each set so there is no small tip variant. Those with small ear canals will have to find a 3rd party variant such as SpinFit or Spiral Dots.

Mind you, the fitting really needs long tips to keep the pressure and seal stable so this may have played a role in not including a short small size tip. My choice for the review began with single silicone bore large but switching to the foams produced a better seal and comfier fit so I stuck with them. Yes, they will tweak the tonality a little but I am fine with that. 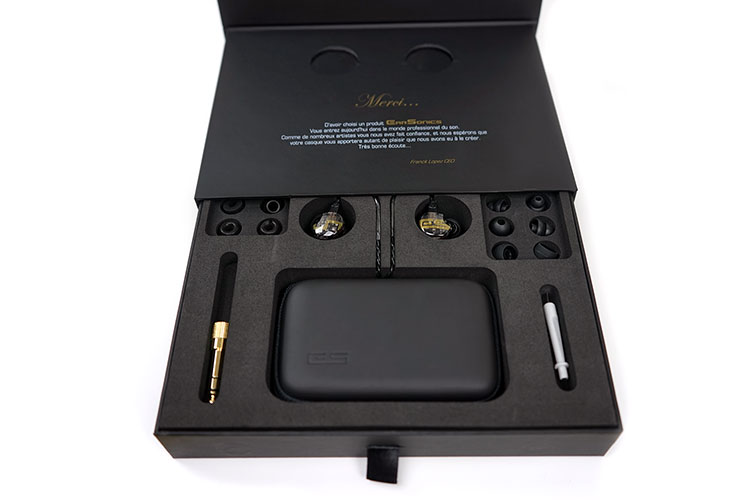 The packaging is a major upgrade on the style of the ES-2 and ES-3. Not that those two were in any way poor simply the ES-5 takes it to a rather plush level indeed in terms of presentation. Ever seen a slide-out jewelry box or perhaps one of those uber fancy chocolate boxes with individual containers? Something like that. It is a very impressive design.

Inside you get unique compartments for the tips, gold-plated quarter jack adapter, cleaning brush, the ES-5s, and semi-stiffened rectangular rubber finished carrying case. The carrying case is a bit bigger than the original ES-3 semi-circular case and has a bit more space to it. The top has a more modern and subtle ES logo to the far right rather than the full-on Earsonics logo in the middle of the ES-3 nylon case. 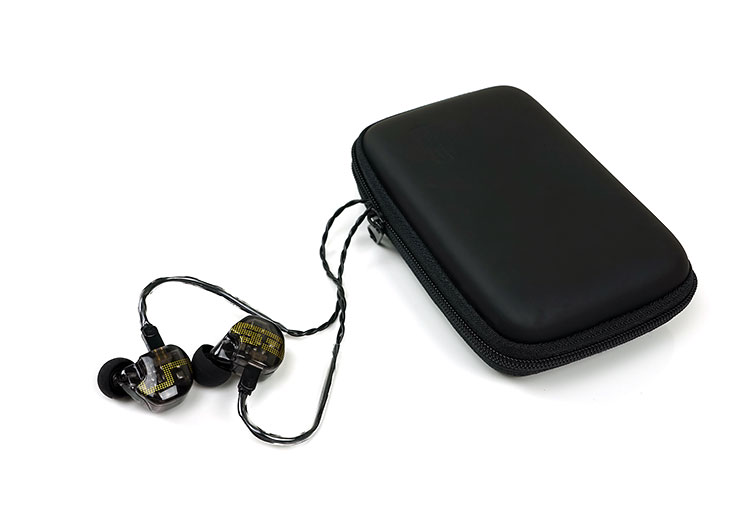 However, the one thing I would love to have seen inside the case was some sort of netting either top or bottom. The case is very shallow and semi-stiffened which creates a nice low, pocketable, profile. However, if you are stuffing tips in there along with everything else the chances of everything falling out when you open it are very high. A simple canopy netting would have prevented that.