Where Custom Art positively does excel in (outside of their tuning) are their custom build designs. I do not think I have ever had a bad one from them in 4 years and the FIBAE 4 is no exception. I still adore my crazy “Avatar’ candy color scheme of the FIBAE 3.

This particular design is called the  “Galaxy” which is a transparent all-blue shell and faceplate with a sparkling two-tone wave styling on the plate as well as a light glitter finish on the main shell. The bright tone is down a touch from the FIBAE 3 color scheme but still looks stunning and quite original.

I am a big fan of singular color blends rather than different shell and plate designs so this one hits the mark for me on a personal level. The CA logo is also neatly on the side of the shell rather than on the top to maximize the impact of the design rather than disrupt it.

This is an “off the menu” design rather than one you can directly build so if you want something like this check their FB page for options. Alternatively, drop them an email and ask Piotr and the team if it is possible and for what price. 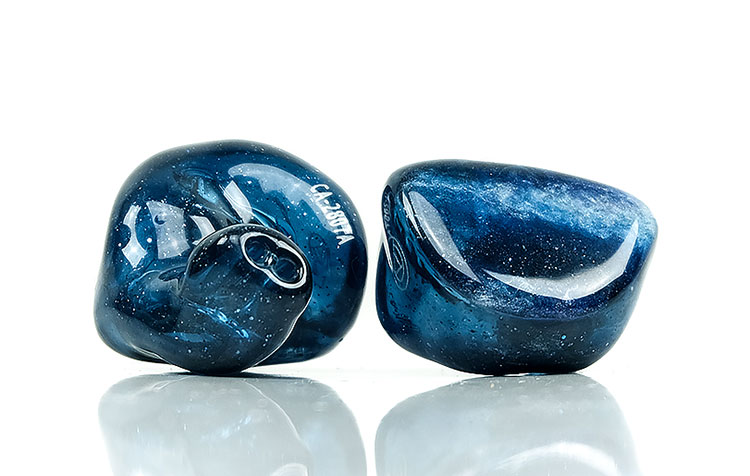 The finishing is top-notch also. I can’t see any bubbles, blemishes or inadvertent seams near the plate. The polished finish is immaculate. The design is built on a hollow body acrylic shell and matching faceplate so there is a degree of transparency but not so much as to disrupt the flow of the design itself.

Like the FIBAE 3, the FIBAE 4 uses a dual bore nozzle design with top-firing dual balanced armature internal designs. Custom Art do not use a horn design to mix the various bandwidth signals in the bore before it hits your ear. Instead, the tubes right the length of the nozzle to the exit points.

The FIBAE 4 configuration is an even split across the main frequency bands; one for the lows, one for the mids, one for the highs, and one for the super highs. On top of this, the FIBAE 4 logically uses Custom Art’s FIBAE™ technology, hence the name.

The FIBAE 4 is terminated with a 2-pin flush socket at the top and comes with a 4-wire 1.2m SPC stock cable in a silver jacket finish. If you look closely it is not a braided build either. Instead, the wires run parallel to each in 2 lines before the y-split.

It is quiet, memory free so no tangles but a little microphonic near the ears with that flat rubberish jacket and memory hook covering. Strain relief looks excellent and it comes terminated with a TRS 3.5mm gold-plated right-angle jack so fairly low profile.

The fit is a perfect balance of pressure and comfort being neither too relaxed or short, or deep and tight. I actually prefer this fit over my FIBAE 3 and it does a slightly better job for passive isolation compared to the previous one also.

I did not detect any gaps forming in either open or relaxed jaw mode either so the seal is excellent. Put it this way, I cannot tell if my aircon is on or not and it plays havoc with my measuring mic at 50-60Hz.

With the slight increase in lateral pressure, the fit is now very secure and a little further away from what I term a ‘relaxed fitting’ which was where I felt the FIBAE 3 fitting was going. The FIBAE 1 and 2 are also closer to the FIBAE 4 for lateral pressure and depth of the fit.

The FIBAE 4 still uses a fairly wide and shortish custom nozzle rather than deeper penetrating versions such as M-Fidelity and 64 Audio designs. Those two have a greater emphasis on accuracy and depth as opposed to lateral pressure.

The FIBAE 4 also does not have the same lateral pressure as JH Audio’s larger builds such as the Layla. JH Audio’ phasing technology and their use of differing length tubes mean their builds are almost always huge meaning the pressure on the canals is greater. 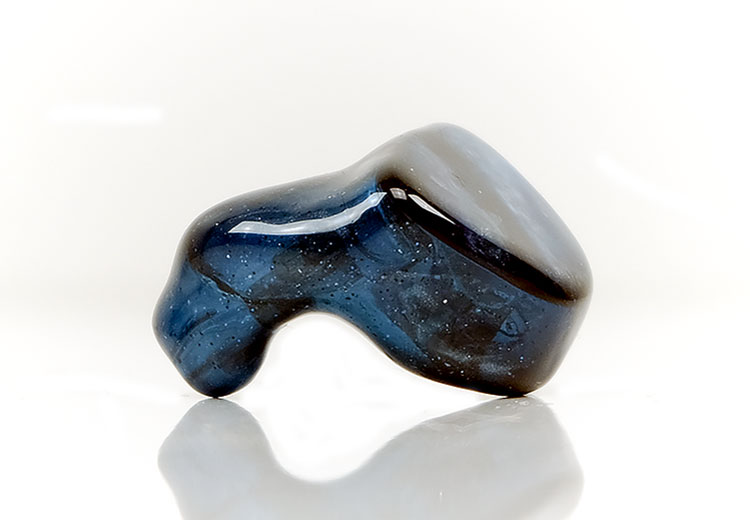 There is no grey area with the FIBAE 4 tuning. This is an out and out V-shaped monster with tons of low-end depth and power, a dipped midrange and a reasonably extended but smooth sounding top-end.

This is the kind of monitor tuning that is built for a lot of EDM, dubstep, some modern trance genres and my favorite genre, synth wave. It is less likely to be an idea pairing if you like a more prominent midrange performance and vocals front and center.

Not that is a slouch with vocals. With acoustical sparser tracks and artists like Allman Brown’s ‘honey’ed’ vocal pitching the FIBAE 4 does a fine job of creating a very euphonic and soothing delivery. Rather the FIBAE 4’s calling card is that superb low-end response. That is the star of the show and you will find yourself gravitating to that power it delivers on it is called upon.

Interestingly, Custom Art have refrained from throwing in lots of upper treble energy with the FIBAE 4. It is more on the relaxed and slightly darker side of things. I often find budget V-Shaped tuning to produce heavy treble responses in an attempt to deliver heavy levels of contrast to the elevated bass. This can often leave it too sharp sounding. FiiO’s F9 is a classic example.

The FIBAE 4 pulls back a little from that so it is a more rounded even-harmonic bias in its timbre making it sound wetter, smoother and more forgiving. You will not find a hint of sibilance with the FIBAE 4 performance as a result.

The staging is pretty close to what you would expect from a V-Shaped configuration with just that minor deviance on the top-end. You get a far deeper richer low-end than the FIBAE 3, a little more texture and detail than FIBAE 2’s low-end also despite the perception that it goes rather deep also.

Height is pretty good also, perhaps lacking in a “peppy” level of sparkle and sounding a little more on the relaxed side but it honestly does not sound like its lacking in air or headroom.

Mids are pushed further back and instrumental positioning closer to the 2-4k range will play second fiddle to any instrumental presence in the lower-mids.

Heavy low-end bass guitar and kick-drums work will resonate a bit more in the mix and sound a little further forward. Percussion has some decent presence also but it is just a shade relaxed to really dominate or push down on the vocals.

Out of all the FIBAE monitors,  the FIBAE 4 delivers the ‘grandest’ or the biggest soundstage thus far.

Huge bass, solid bass, punchy bass. Not the fastest you will find out there but faster than large dynamic driver levels of decay. These bigger woofer type top-firing drivers will never be as clinical and quick as a cluster of smaller BA drivers tuned for the low-end but they do deliver much more satisfying levels of sub-bass weight and presence.

The detail is excellent also as is the layering. The bias is very much towards the sub-bass presence with a slow lingering drop into the mid-bass and lower-mids. It carries plenty of authority into the instrumental bass fundamentals but it also carries a fair bit of warmth and even-harmonic presence into the lower-mids timbre.

As a result kick-drums, bass guitar plucks and some rhythm guitar work is going to sound very meaty and solid on the FIBAE 4. I can well understand why Custom Art sees this as a potential monitoring tool for drummers.

Studios should be able to get a grip on thinning the bass out with the FIBAE 4 low-end and making room for the all-important kick drum channel when creating mixes with excellent sub-100Hz clarity and separation. Also, anyone using shelving boosting techniques sub-100Hz should enjoy the FI(BAE 4’s capability as it remains pretty prominent up to 100Hz.

Instrumental timbre is warm, euphonic and full-bodied in its delivery. However, there seems to be just enough of a lower-mids dip on the FIBAE 4 to prevent it sounding congested and muddy. Instead, it draws its power and presence from the excellent sub-to-mid-bass elevation.

The detail here is very good actually. I was playing Atrey’s ‘Valkyrie’ which features a female vocal overlay from Dana Phoenix. It is a fairly stark synth wave mix with plenty of space between the instrumental layering which really suits the FIBAE 4 presentation. Despite the vocal sitting back in deference to the low-end and lower-mids synth crunch, everything sounded more than open and spacious sounding.

The FIBAE 4 does quite well with lower-pitched male vocals in terms of warmth and forwardness but it is not going to be on the level of the FIBAE 3 which is much more pronounced for vocal performances.

You will find that 2-4k range on the FIBAE 4 is a little dipped so when the energy is flying out of the bass and lower-mids some higher-pitched vocals will fall back in the mix a little. Percussion has a natural sound with some nice body but not so much bite and snap so it sits back a little more in the mix.

As mentioned in the summary, I find the treble presence is not as forced or spikey sounding as cheaper budget hybrids such as FiiO’s F9 which try to bring a much more energetic level of contrast to its weighted low-end.

Here the treble is smoother and a bit more liquid to my ear with the FIBAE 4. Some might feel that produces a slightly more relaxed tone to the FIBAE 4’s top-end and I won’t deny that but it is not lacking in headroom or air either. If anything, there is a little lack of energy in the upper mids which downplays percussion presence and yes odd-harmonic infusion is not as dominant as the FIBAE 3.

Those who want a cleaner timbre, a lighter tone and more natural sibilance in their vocals then the FIBAE 3 is probably where you want to start off with. However,  if you want a more rounded even-harmonic tone and a ‘wetter attack’ to your treble then the FIBAE 4 should fit right in.