The Cayin E02 Motherboard is the 4th module released for Cayin’s new N6ii DAP featuring a Class AB balanced amplifier as well as a dual ES9038Q2M DAC design. It is priced at $419.

Disclaimer: The Cayin E02 sent to us is a sample in exchange for our honest opinion. We thank Cayin for this opportunity.

As sure as death and taxes, Cayin has released a balanced alternative to the unbalanced E01 motherboard, cunningly titled, the E02.

At the same price point of $419, the E02 is the 4th swappable amp and DAC motherboard for their excellent N6ii DAP. I hesitate to call it a DAP as more and more it feels more like an Android-based transport given the choices of motherboards now available.

And choices are a good thing in today’s volatile market. Of course, at $419 your choice does not come cheap but then again, as far as I know, Cayin are the only DAP manufacturer that allows you to not only to change the amplifier but also the DAC. For many, that is pretty much what counts in a DAP sound quality-wise.

It is probably too crude to call the E02 an E01 with a 4.4mm socket. There are quite a few changes internally and in terms of how it operates and no more so with the switch to the ES9038Q2M delta-sigma DAC chipset. This is an ‘upgrade’ of sorts on the E01’s single ES9038PRO implementation.

Now, this is not Sabre’s flagship “pro” chipset but it is pretty darn close. Instead, the Q2M moniker, as we have seen in other DAPs, indicated ES’s mobile orientated stereo product line. Not for mobile phones, but rather optimized for low power consumption and smaller physical size. They make more sense in mobile-based gadgets that rely on a finite battery cycle rather than desktop PRO solutions that can go on forever on AC.

To make an even clearer distinction from the E01 and to take advantage of the balanced topology, Cayin had implemented the ES9038Q2M chipset in a dual-channel configuration. That is one for the left and one for the right channel with both working independently from each other.

The decoding capability of the E02 motherboard remains unchanged from the ES01 which seems fairly logical. The E02 is capable of up to DSD256 and PCM 32BIT/384kHz in WAV format with FLAC at 24BIT/192kHz.

Granted, new DAPs are now coming out with DSD512 and up to PCM 768kHz/32bit capabilities as well as X4 and X8 MQA unfolding such as the FiiO M15 and the DX220 from iBasso. Some may feel that it is a missed opportunity for the N6ii to stay competitive in 2020 and beyond.

However, apart from the dubious commercial availability of media encoded to that level, the secret in the sauce if more often found in just how good the amplification works in tandem. It is here the E02 makes its presence felt. 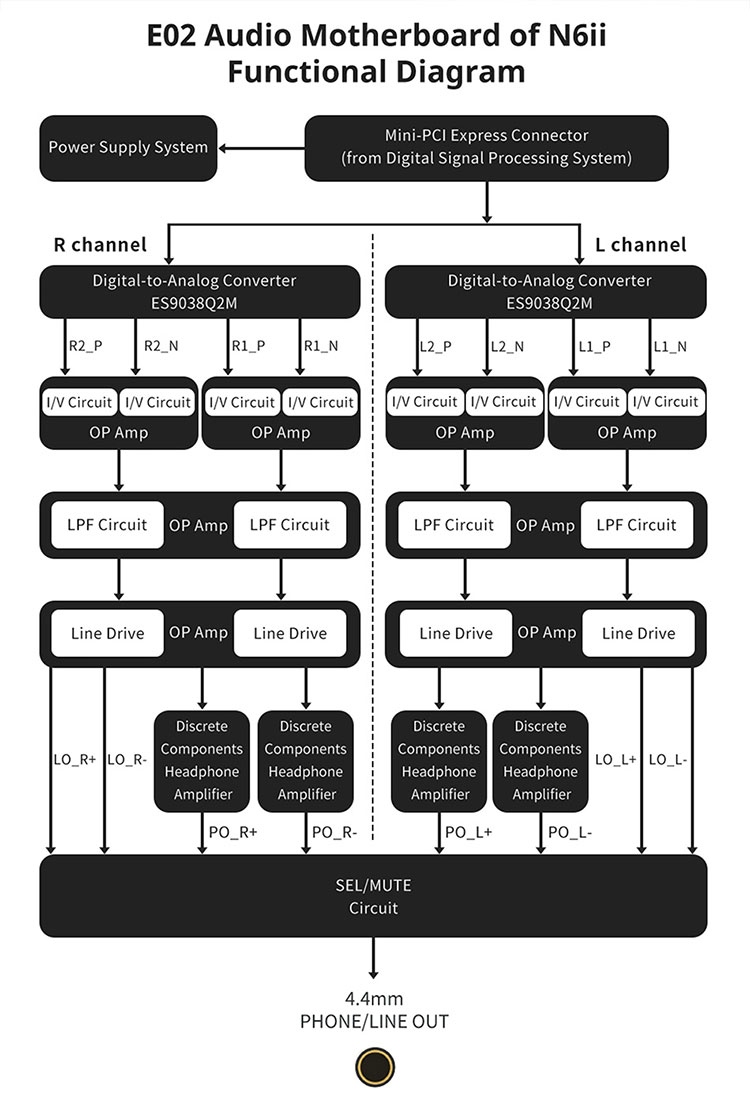 A very different setup to the E01. The E02 dispenses with the dual operational mode of the E01 so now it is a pure Class A/B design but it does retain the discreet topology approach.

That means the circuit path is resistor rather than block-based giving Cayin a lot more discretion in terms of fine-tuning key features such as the voltage output, something they have really focused on here with the E02.

It is also one of the primary reasons why there is no Class A alternative operational mode. Discreet components, especially in a quad-configuration take up a lot of space compared to traditional block opamp designs.

Not only is the E02 a discreet engineered 4-channel balanced topology for headphone amplification but it also offers a proper balanced line-out. What that means is that the voltage is not running through the headphone amp but rather a dedicated output path when you switch to LO.

The voltage parameters of the E02 4.4mm balanced line-out offer 3 levels of voltage output including 2.2V, 3.2, and a balanced optimized 4.1V setting. That should be enough variation for you to select the right voltage level for your analog amp without the risk of distortion.

This motherboard is built to handle a good few headphones of a reasonable rating, however, the SNR and THD+N numbers at 121dB and 0.001% would suggest there is scope for more efficient monitors to perform quite well also.

Looking at the E01’s equivalent ratings of 119dB and 0.003% should give Campfire Audio Solaris and Andromeda users a bit of confidence (see below for noise testing) in terms of a low level of background hiss.

I will keep this one short and sweet since each motherboard has virtually the same physical design. However, one aesthetical difference from previous motherboards is the omission of the insulation tape over the screws on the back of the motherboard.

Despite the rather jarring ‘metal on metal’ sound from the lack of tape protection, this is a good move from Cayin. The previous A01 to E01 board’s insulation tape finish had a tendency to roll-up and prevent the boards from locking properly meaning taking them off eventually. Now the tape comes as an option instead of pre-applied.

The only other significant design difference is the I/O to the front is the inclusion of a gold-plated 4.4mm dual-function (PO/LO) output.

The move to a Q2M DAC solution for the balanced output was a smart one. If they had kept the PRO DAC chipset from the E01 and went balanced the battery life would most likely have dropped to an uncomfortably low level.

Cayin has managed to keep the same 9.5-hour average battery life from the unbalanced E01 Class AB rating and a very impressive 22 hours on the balanced line-out. Tested conditions to get those ratings are also quite fair at mid-gain 32Ω for the PO with the screen, WiFi, and BT off and the same again for the LO with a 10kΩ load.

However, do expect some variation on that if you throw on WiFi for streaming or keep the screen on at a high brightness level. My own testing saw some drops to around 7-8 hours PO output (headphones) with heavy Android WiFi usage and the screen on. 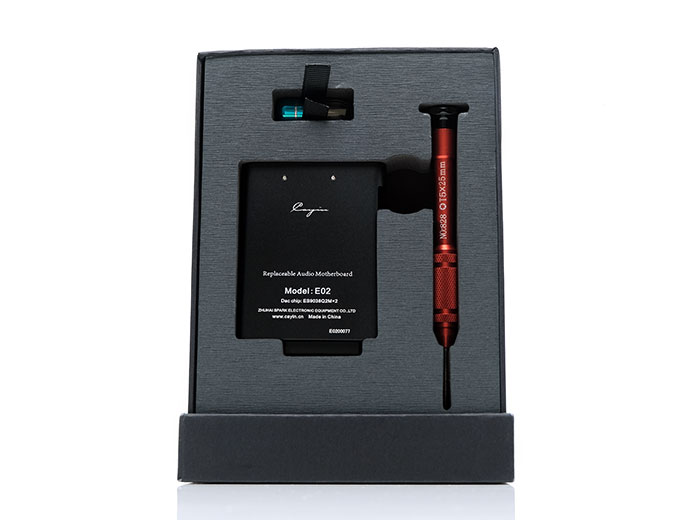 The packaging for the E02 remains unchanged from the rest of the N6ii motherboard lineup.

That means a slimline strengthened black cardboard box with a branded slip off paper band and your usual Torx T5 bit screwdriver with a ‘pill case’ of 4 additional screws. On a completely puerile note, the red color of this sample’s T5 screwdriver is much more to my liking than the previous blues and purples.

I much prefer these screwdrivers to some of the competitions straight head screwdrivers. You can apply pressure on the top and twist the main barrel with your hand moving which makes it so much easier to take the screws in and out.

Given none of these screwdrivers are magnetized you can lose them very easily if you drop them. This screwdriver reduces that plus Cayin the 4 spare screws in the package as additional insurance.

One other ‘comedic moment’ is the reference to the exposed connection point of the card as a “golden finger” in the manual. Quite what one takes away from that reference shall remain buried for another day. Suffice to say I prefer to call it the connection point and it is adequately protected with a small ‘rubber’ slip-on. Yes, don’t go there. 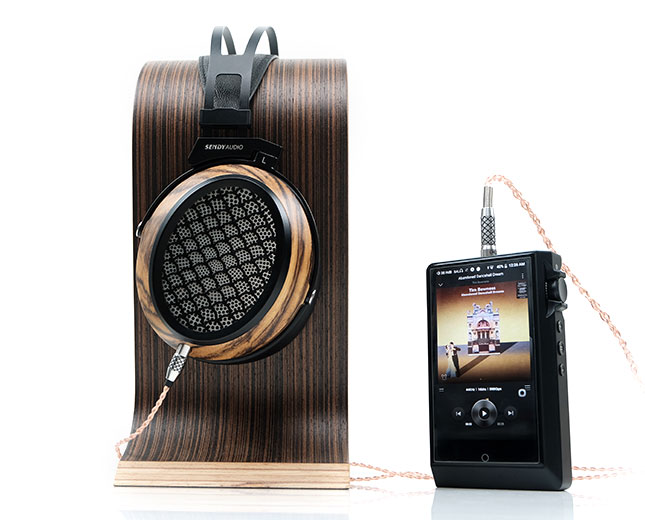 I had crudely expected the E02 to be the card for the headphone enthusiasts and the E01 related to IEM lovers. However, I am glad to say that it would be a mistake.

Granted the noise floor is a shade higher on the E02 and very sensitive IEMs will pick up on that. However, the useable current on low-gain is excellent for most monitors as well as being able to scale much better than the E01 can with harder to drive headphones. You can see more about that on page 2 in our Synergy section.

This card is all about improving the dynamic range and I would consider it a more ‘explosive’ or high impact sound than the E01, especially if you like the Class A operational mode which is very euphonic and a typically SET type tuning.

The E02 pulls back a little from the soothing tone of the E01 Class A and errs more to the Class AB side of the E01 but at the same time gives you more of a solid-state dynamism.

In a way, the leap in dynamic range is similar to the iDAC-6 MKII from the MK1 tuning, especially when paired with sub-100dB SPL headphones. The E02 is a clever blend of low-end body, midrange clarity, and a smooth but airy treble that absolutely delivers on its promise of above-average channel separation.

Out of the four cards to date, the E02 has the most agreeable harmonic balance though the midrange timbre of the E01 will still retain a lot of enthusiasts who love that smoother SET sound. It is also the one card I feel confident about using all but the most inefficient headphones with.

Not that the T01 and A01 balanced cannot drive the same headphones but they either lack the dynamic range and power of the E02 such as the A01 or has a more studied synergy matching process due to an enhanced treble presence, (T01).

The E02’s timbre or harmonic balance is much more agreeable to my ears with a wider range of headgear. You get a pleasing but not overcooked injection of mid-bass warmth and a healthy level of sub-bass power which underpins much of what the E02 is about.

The traditional ‘PRaT’ phrasing is very applicable to the E02 with a denser lower-midrange instrumental sound pulling from that heavier hitting low-end. The E01 in Class AB comes closer to this than the Class A but still sounds a shade muted into the mids.

I think that difference is maybe due to the better separation and headroom of the E02 creating a more spacious sound to the midrange performance of our tested gear. You also get a bit more treble presence and an airier sound which in turn adds a bit more contrast to the E02 instrumental timbre making for a more vivid sound.

Whilst contextually the headroom on the E02 is excellent and perhaps better than the E01, in its own right, it is still relatively relaxed or unforced top-end delivery. It does not carry the same ethereal sparkle as the T01 card output preferring instead for a slightly attenuated and wetter delivery.

Instead, it compensates with a more complex midrange and deeper low-end. What marks it out as the best overall card for imaging IMHO is how well it images in that wide soundstage and the superior separation. Something that places it leagues ahead of the stock A01. You want your music to sound fresh and engaging and the E02’s better PRaT and immersive tuning staging places it ahead.

I still love the E01 midrange mind you. It does deliver a blacker staging background on very sensitive IEMs that the E02 cannot match so it is not a home run for the E02 on every aspect.