We review the Burson Fun and Burson Bang, which are a set of new compact headphones and power amps ideal for near-field speakers. They are priced from $299.

Disclaimer: The Burson Fun & Play sent to us are sample units in exchange for our honest opinion. We thank the team at Burson for giving us this opportunity. Burson are not site advertisers on Headfonics

You can find out more about Burson products reviewed on Headfonics here.

Note, that this article follows our latest scoring guidance which you can read here.

Burson Fun & Bang
The Burson Audio Fun and Bang sounds best to me with the V6 Classic opamps. That's a personal preference thing, the V6 Vivid could work really well for those who really want a more low-end and better treble presence. The Basic configuration in the Fun is pretty good also with a decent DAC behind it. The transparent neutral tone has an edge over the harder-sounding Play version.
Slide here to add your score on the gear!33 Votes
8.2
8.2
Reader's Score
$299 - $599
Burson

Earlier this year Burson launched their diminutive Play Amp/DAC which was a pitch for the PC gaming community as much as a budget-conscious desktop headphone audiophile choice.

Our review was highly complimentary of the simplicity and sound quality of the Play, particularly when you have the option to roll the opamps. The excellent Vivid and Classic opamps from Burson turned the Play into one heck of a smooth performer for the price.

Combined that with a 2W output stage for headphones and you pretty much had all you need for both solid gaming and headphone listening. This time around Burson has taken that basic opamp rolling concept and expanded the line-up to include a dedicated headphone amp, the Fun, and a dedicated power amp for speakers called the Bang.

The prices of both remain competitive at $299 but will the sound be equally competitive?

The pitch on the Fun and Bang is much the same as that of the Play only this time the purpose is a bit more niche and catering to slightly different needs.

The Fun is positioned as a pure Class A headphone amp with rollable opamps but without the DAC. It is machined to also fit smoothly into a standard PC tower in much the same way as the Play can. You can actually have both if you really want to but the overlap between both might be too much.

The Fun is more for those who already have a good DAC and simply just want the amplifier functionality. It does have pre-amping, analog inputs and outputs, and a mic-through so there are additional useful features besides being able to connect it to DAC analog outputs. 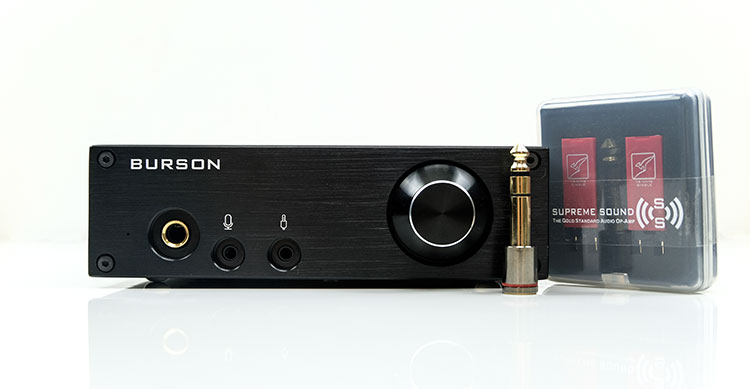 The Bang takes the same form factor as both the Play and Fun but moves away from headphones to speaker lovers as a pure A/B power amp.

This is a very small and compact offering but again with a lot of features harmonious within the range. You get a set of single-wire taps and a pre-amp input with dimensions that just beg the Bang to be stacked at the bottom of the Fun.

The fun’s pre-amping capability, form factor, and outputs make it a natural stacking partner for the Bang though the Bang can really work just fine with any single-ended preamp.

The target audience for the Bang is more the desktop speaker crowd or near-field monitors. However, it is not unworkable at all in a dedicated 2.1 HiFi setup. Just like the Fun, the Bang can be opamp rolled which will deliver a set of unique sound signatures.

Burson is not messing around with a Class A design with no capacitors in the signal path for under $300 starting point making it one of the cheapest Class A amps we have tested in a while. The power numbers are incredibly impressive though I would say right off the bat that this is not an amp designed for sensitive Monitors.

Burson made a product run design change to the Play a while back to accommodate monitor user concerns that the noise levels were too high. They did a great job on that but the Fun is an out-and-out headphone amp this time with a 6Ω headphone output impedance combined with a tremendously powerful 2W into a 32Ω load starting point.

For those looking to stack the Fun onto the Bang or any other amp (headphone or otherwise), the line-out is a standard 2.1V output so it should pair well without any issues regarding dynamic range and voltage.

As in the Play, Burson has opted not to use a traditional switching transformer design (SMPS) for power inside the Fun. Instead, the Fun is powered by four sets of Max Current Power Supply (MCPS) which does away with high resistance copper windings (SMPS) and uses switching resistors instead that adjust to the power supplied.

The resistors also convert AC to DC at a much higher kHz than traditional SMPS designs thus a much better performance for noise and therefore dynamic range under those heavy 2W power loads.

You have three choices of opamp inside the Fun and they come in a pair which makes it a little cheaper to roll than the Play. The Basic edition is supplied with a set of TI NE5543 opamps which is part of the combo of chipsets deployed in the Play so I am expecting the signature of the amp stage in the Fun to be similar to the Play.

For an additional fee, you can upgrade to the V6 Vivid which I find to be a little more V-Shaped or the TOTL creamy smooth Classic 6 opamps which are my own personal favorites. 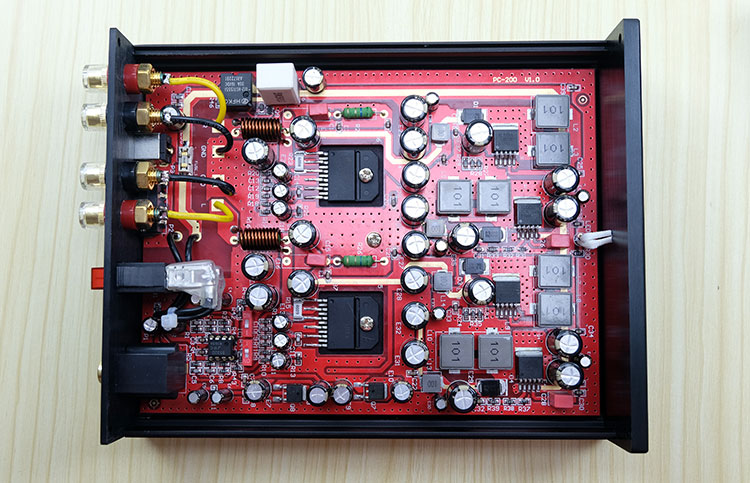 (Picture above is the Bang Classic opamp configuration. Vivid and Classic opamps have yellow and orange encapsulations).

The Bang is a dual-mono Class A/B 40W power amp and is designed to deliver tons of headroom for near-field or bookshelf passive monitors or even act as a decent power amp for HiFi 2.1 speaker systems outside of the PC environment.

By the way, due to the fact the Bang chassis is designed as one big heatsink, Burson does not advise sticking this one into your PC tower due to the levels of heat, it will generate.

The 40W output rating is set for a demanding speaker resistance rating of 4Ω. It will drop to 29W for 8Ω speakers such as my own B&W 684 S2 floor standers and all the way down to 15.2W for 16Ω speakers. The SNR is a steady 91dB at all output levels on the Bang.

My own personal experience has been 4-8Ω variants with the 684 S2 needing a minimum of 25W from any amp so there should be enough headroom on the Bang to sound pretty good with the Bang.

One of the attractive internal features of the Bang is its built-in buffer stage with selectable gain levels. This is done through a high and low gain switch located on the inside of the amp to accommodate sources of varying voltage levels in their line-out. For standard 2V connections keep it on low gain.

For weaker sources below 2V such as DAP line-outs, I would recommend a high-gain setting to compensate.

Like the Fun, the Bang is Opamp rollable from a single DIP8 socket. The Basic Bang comes with a single TI NE5532 installed which is one of the chipsets in the Play Basic setup and you can upgrade for more dollars to the V6 Vivid or V6Classicc opamps depending on your preferences. Mind again is the V6 Classic for the Bang. 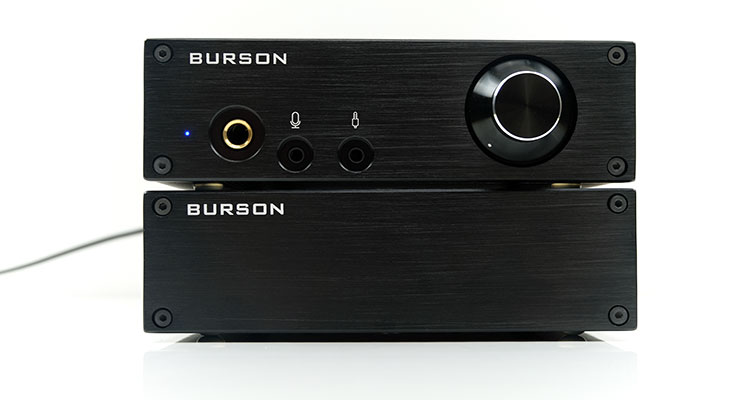 Both of these units are incredibly robust in terms of the materials used. If you have read our Play review or own a Play you will be very familiar with how both the Fun and Bang look and how they are built. All of these components measure the same size at 210mm x 145mm x 45mm and they are designed to stack neatly on top of each other with those supplied blister feet accessories.

Both have a very solid aluminum chassis cut in a classic rectangular shape with screw-on plates to the front and rear. The finish on each is all in black save the white accent of the brand logo and the jack ports, and the mic icon gold trimming on the front panel of the Fun. The top panel of each has two columns of venting holes running on the far left and right.

The weight of each unit varies given the components inside with the Fun at around 2kg and the Bang just a shade over at 2.5kg. How you stack them may be determined by how you like to have your system components but the Bang is the heaviest and warmest of the units.

Personally, I prefer the Bang at the bottom with the Fun on top. It feels like the natural order of things.

The Fun is set up to handle both pre-amp and regular headphone output duties. It also has a 3.5mm mic throughput from the rear to the front to keep gamers in the loop. The front panel consists of the single 6.35m unbalanced headphone output jack stage, a mic output, and a 3.5mm auxiliary input which you can use with line-out sources from the likes of DAPs.

Volume control on the front has the traditional Burson-style ALPS volume pot knob which doubles as a pre-amp volume control in case you are using another analog amp of the Bang in the chain.

Interestingly, the Fun does not come supplied with the remote control as the Play did. That is a shame, especially for 2.1 system owners. Getting up from your comfy couch for volume tweaking on a speaker system is a pain in the backside.

In the middle, you have a Molex power connector for hooking up to your PC supply, the standard 12V DC 5A power socket, and a power switch.

Just in-between the switch and RCA out is the Mic 3.5mm throughput port. Here you can connect your source or DAC for headphone functionality or pre-out your source input to the Bang or another analog amp of your choosing.

The Bang is much simpler in its inputs and outputs. Apart from the Blue LED diode to indicate power on there is nothing to the front panel, everything is to the rear. On the back panel, you will get a set of unbalanced dual RCA inputs for pre-amps such as the Fun or Play.

You are provided with a Molex connector but we advise you to keep the Bang outside your tower due to the heat it generates.

To the left of the main power switch and just above the 12V DA 10A power port are a set of 4 speaker posts (left and right). The Bang is not bi-wirable so just a single set for left and right channels.

What I am delighted about is the fact you can use standard banana plugs with the Bang as well as screw lock gold-plated binding posts. Nothing worse than a good power amp housed with budget wiring clamps on the rear. 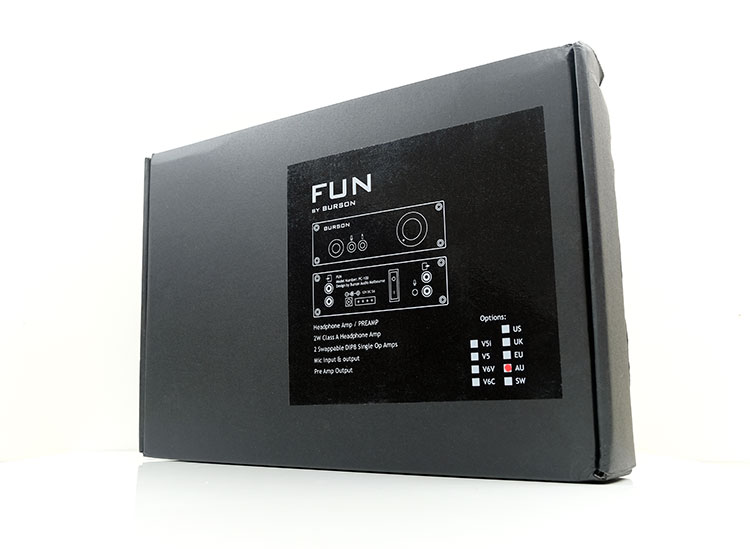 As with the Play, the Fun comes packed with a decent set of accessories for a headphone amp. Inside the retail box you get the following:

Sadly, there is no remote control with the Fun, even if you decide to upgrade to the higher opamp selection.

The Bang comes in a similar box but with slightly fewer accessories. Not that you need that many accessories for a power amp. They are as follows:

If you have decided to upgrade the opamps in the Bang they will either come pre-installed or in a small plastic container.