The Burson Audio Play is an audiophile-level DAC and desktop amp primarily aimed at the gaming community. It is priced from $299.

Disclaimer: The Burson Play was sent to us in exchange for our honest opinion in this review. Burson Audio is not an affiliate or advertiser on Headfonics and the unit does not have to be returned. Many thanks to Burson for giving us this opportunity.

To read up on previous Burson Audio products reviewed on Headfonics click here.

Burson Audio Play
The Burson Play is a very solid exposition on the ability not only to make a monkey out of those obsessed with DAC sound signatures but that powerful amps should normally be rather expensive. The opamp rolling is nothing new, but Burson opamps, combined with that Class A discreet design are truly excellent for the price points.
Slide here to add your score on the gear!23 Votes
8.1
8.1
Score
$299-$549
Burson Audio

It has been almost seven years since we did our first Burson product review, the HA-160D in 2011. Though it was reviewed by Kyle back then I had the unit myself and loved it. Of course, the time has moved on and Burson has really pushed their amplification philosophy onwards and upwards since then.

In the last few years, Burson has developed a far more open approach to discreet Class A amplifier design and in some ways, they now have two key approaches to the market. Yes, they still make fully complete amps and the Play can be considered one of them. However, they also started pushing their own line of discreet Opamps which has its own identity from their Supreme Sound division collaboration on the Lycan a few years ago.

As a result, the Play is sort of a meeting of the minds in terms of amp design and their growing Opamp development. The Play starts at $299 which is competitive. However, you have the opportunity to really go for it with some of their best Opamps on offer which can push the price up to $549. The choice is yours.

The clue is in the name, Play. This is a DAC/Amp with a lot of the hallmarks of the Burson amp building legacy. However, the pitch of this amp is towards the gaming community. Sporting a design that can dual as a standalone component or slot into a PC tower, the Play is being pitched as offering a clear upgrade to gamers on audio quality as well as audiophiles who want a competitively price DAC/Amp for their system.

For audiophiles who like to tinker Burson are also pitching the Play as a versatile discreet Class A amp with swappable opamp capability. Each unit has 5 ‘rollable opamps from the base config of NE5532 X 3, NE5543 X 2, right up to the $549 TOTL version with their V6 line of opamps, Classic and Dual. A choice is a powerful thing and plenty of audiophiles will appreciate having the ability to configure the play based on their budget and preferences.

Beyond that, the Play can double up as a pre-amp, a dedicated DAC and deliver a very powerful 2W single-ended output which will drive most headphones out there today. To top it off, the PLay’s final pitch to gamers is the inclusion of a mic input for those who like to really immerse themselves in online gaming communities. 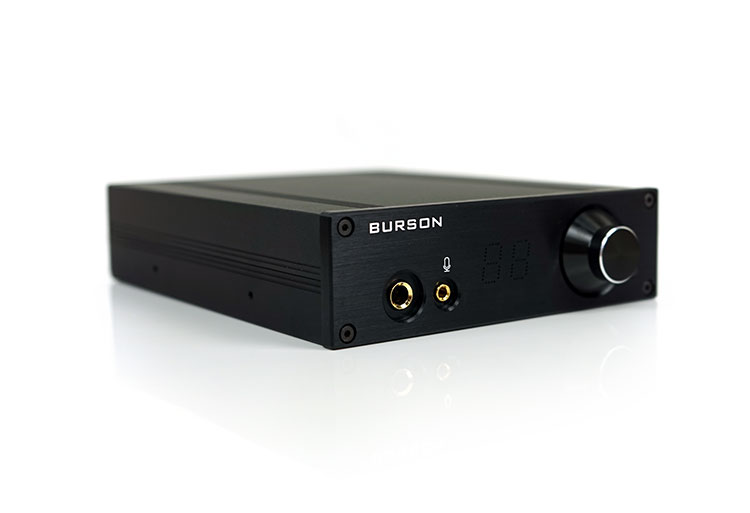 The Play is robust and industrial looking in part with a front detachable panel that is traditional Burson in aesthetics. It measures 210mm x 145mm x 45mm and around 2kg so it is not insignificant despite its relatively small form factor.

This is a very solid aluminum chassis cut in a classic rectangular shape with screw on plates to the front and rear. The finish is all in black save the white and gold accents of the brand logo, jack ports, and mic icon to the front and functional labeling and unit type to the rear. The top panel has two columns of venting holes running on the far left and right.

Now there is a reason for that robust build. The Play is actually designed to either sit comfortably as an audiophile desktop style DAC/Amp on its own or slot into a 5.25″ PC bay and securely fasten to become part of your gaming rig. Both front and rear are designed for easy access for volume, inputs, and outputs if part of your computer tower.

Burson has actually supplied a number of accessories to complete the PC integration job including a rear dual RCA tray adapter and a set of fastening screws that slide into the side of the Burson play to lock it tight. If you have a matching black tower this is going to look the business.

If you plan on standing it alone I would invest in a small set of 4 x 3M blister pad feet to keep it off your desktop as the heavy angular build could leave a few scratches. Lifting it a few mm off the desktop also enhanced the aesthetics for me personally and adds some additional grip. (See feet in the pic below)

Front and center is a simple but large and clear array of blue LED diodes for volume display. The diodes are just behind the metal front panel which has a series of holes to allow two 0-9 LED permutations to cover the 99-digital step volume range of the Play.

It is not as fancy as the Pro-Ject Audio Pre Box S2 Digital but then again, the Play does not have any tweaking options such as filters and distortion settings so volume is all that is required for the display.

There are 2 inputs on the Play. To the front, you have a mono 3.5mm mic input and to the rear a single digital USB XMOS XU-208 chip input stage. The analog mic input is connected to an HS-100B analog-to-digital converter with sampling rates of up to 48k/44.1KHz.

Volume control on the front has the traditional Burson knob, however, this is digital as opposed to analog. It also doubles as a pre-amp volume control in case you are using another analog amp in the chain.

To the rear, you have a set of dual RCA pre-outs rated at 30Ω with an approximate 2v-2.15v output rating which should pair seamlessly with dedicated analog amps. To the front, you have a 6.35mm gold-plated single-ended jack output rated at a beastly 2W into 16Ω.

The power unit is a switching DC 12V 5A and comes with its own power brick as well as 4-pin socket connector for hooking it up directly to a PC power supply when integrated into a tower. Noise suppression from any PC connection is dealt with by a dedicated LT1085 low-noise regulator. A simple but easily reached on-off switch in red is right beside both power sockets. 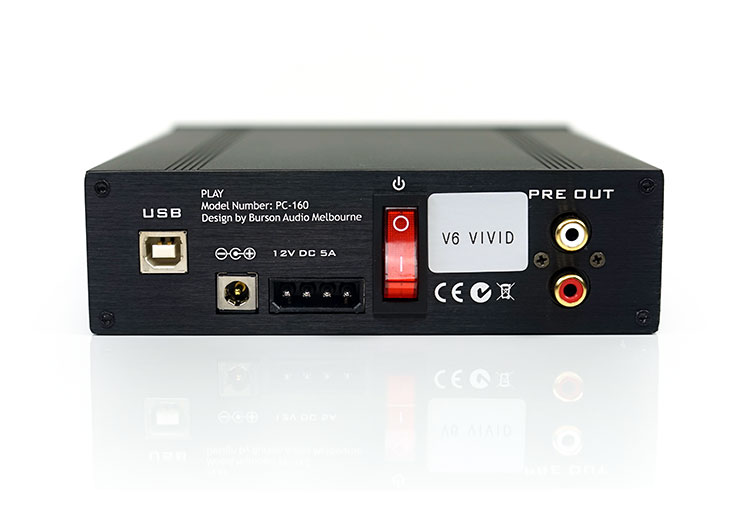 You have two methods of controlling the settings on the Play, old school reaches and pokes with slight breathy coach potato wheeze and a dandy little mini-tank of a remote control. Now if you opted to buy the Play Basic package, which is Burson’s entry-level version, you will not get the remote control. You will likely have to buy it as an optional extra.

I would advise getting it. It is not an overly complicated device with only 3 types of controls and all volume related; mute, volume up, and volume down. However, it is really well built and will take an absolute beating and still work just fine. Well worth upgrading to. 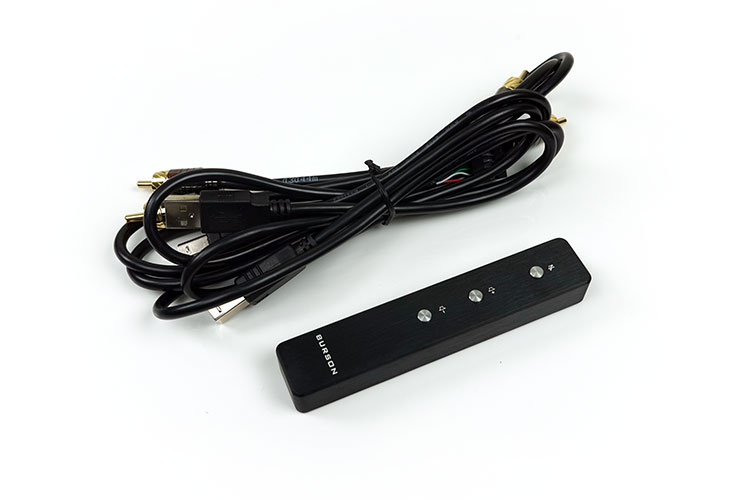 If you elected to the V5i package or higher then I have to say the accessories packed with the Play are excellent quality. Not just the value, but the usefulness. You get an external DC power supply and that robust little remote control that I have now nicknamed Dr. Steel Finger!

Aside from that, you get a USB cable, a quarter jack adapter and a set of nicely finished interconnects for the pre-amp out duties. These are not your usual Radio Shack $2 IC throwaways either. These are some good material thrown into these including some very attractive silver Pailics RCA jacks on either side.

For those wishing to use with their PC you also get a tray adapter, hex key and a set of screws to fasten everything inside your compatible tower. 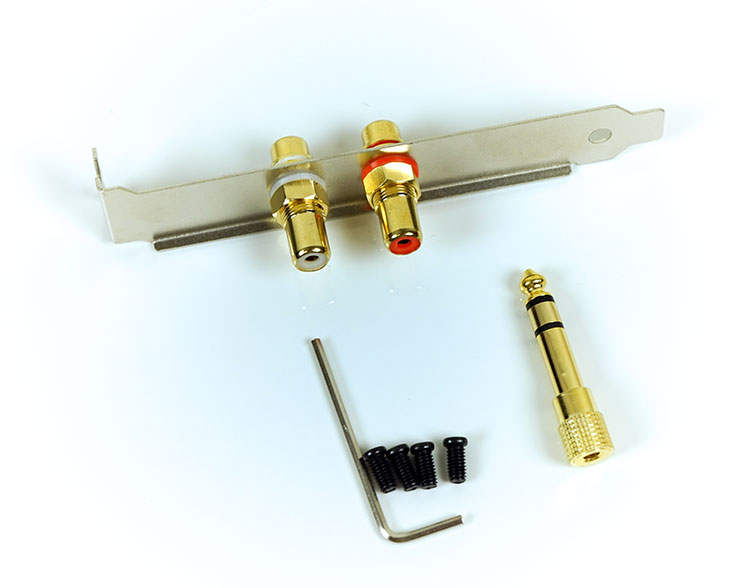 The play is back with a single ES9018K2M chip getting the clock from the onboard 100 MHz oscillators. This is 2-channel chip primarily used in mobile solutions such as DAPs like the Cayin N5ii. It is not the most modern chip out there right now but it is still more than capable and does help keep the bill of materials for the Play competitive.

Traditionally the ES9018 range will provide and very clean and neutral presentation, however, some amp combinations can often exhibit glare using this implementation. You will be pleased to hear that the discreet design and opamps rolled out with the Play make that concern utterly moot.

Decoding rates are solid at 32BIT/384KHz and up to DSD256 so you should have zero issues with any digital signal you throw at it via its USB connection. For the record, the Play uses an XMOS USB XU-208 chip stage for digital input.

This is where it gets interesting. The basic numbers are fairly fixed with the output rating of 2W at 16Ω and 1W at 32Ω under 1KHz loads. That is pretty impressive for a single-ended mid-fi rack and should be more than enough for almost any dynamic headphone and quite a lot of planars in the market today.

What you do need to be aware of is the output impedance level which is rated at 8Ω. This, combined with the hefty power rating makes this more of a headphone amp. You will get noise with IEMs; the noise floor is simply too high for efficient low impedance gear. You will also get a low-Z skew on your impedance response due to that high impedance output rating. Chances are anything below 30Ω might sound a bit ‘off’ on the Play.

The sound of the Play, however, is not fixed due to the ability to swap out those opamps. Our stock unit is the Vivid which comes with three V6-Vivid-Dual opamps and two V6-Vivid-Single opamps. We also received enough opamps to change it to the TOTL Classic sound with an additional set of Classic dual and single opamps.

About halfway through the review process we also received a newer version of the Play BASIC which was optimized for more sensitive headgear but also included the entry-level opamp chips which are three TI NE5532 and two TI NE5543. I can tell you right now there is a big difference in the two setups tonally and in terms of noise levels for IEMs. I am told the new v2 of the Play is the defacto model they are shipping as of now so I would highly recommend the Classic combination for the best mix of noise and tonal refinement.

The Play uses only a pretty powerful Class A transistor amp design with no capacitors in the signal path. There are no integrated chipsets in the Play for these two combinations. Both the V6 and V5 opamps are fully discrete.